Following our Corbett bagging expedition near the Lawers Hills a couple of weeks ago Big Jie and i had a Munro day planned at Tyndrum but the weather forecast looked very unpredictable there with lots of thundery showers around so we set off earlyish after deciding on Meall Ghaordaidh due to it being relatively straightforward and supposedly escaping the worst of the weather at least until lunch time. Needless to say we got as far as the second field near the base of the hill when the heavens opened up complete with thunder and low dark clouds. Since there was next to no wind things weren't going to change anytime soon so after a quick discussion about the merits of heavy rain with thunder and lightning on the hills we turned around and headed back to the car. During my weather check earlier that morning i'd noticed the Callander area had a good forecast until late afternoon so with that in mind i suggested Beinn Each as Big Jie had yet to climb it and several years had passed since i had last been there.
Heading back south through Lochearnhead the skies were still relatively clear so a quick tramp up Beinn Each was most definitely on. We didn't get much further

By the time we set off for Beinn Each the sun was really beating down so the walk up through the forest to Glen Ample gave us a welcome period of shade and the general lack of rain had kept the path dry when we started up the hill.
We made good time despite the heat and 90 minutes after leaving the car we were on the summit having lunch and staring across at Stuc a' Chroin, a hill from a previous rain soaked adventure.
By now the clouds around Ghaordaidh and the Tarmachans were very dark and very low with thunder rumbling in the background and this weather was finally heading south as forecast, time to go. We made it down off the hill without incident but the rain was definitely closing in with the final stretch along Glen Ample walked under gray skies. Start of Beinn Each hill path Summit of Beinn Each 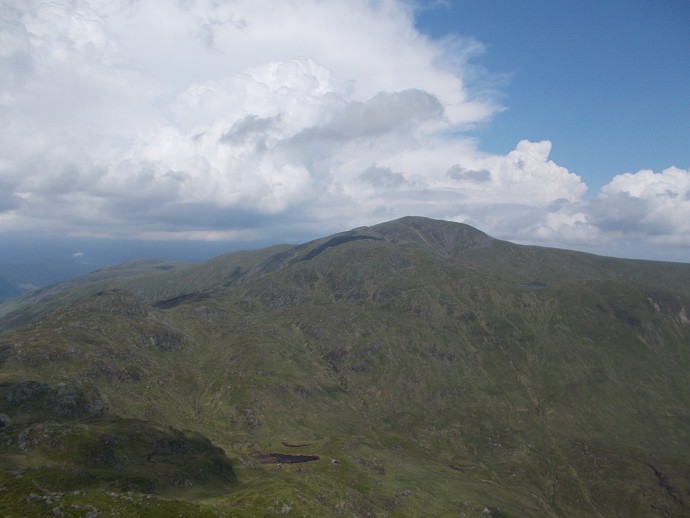 Stuc a' Chroin from Beinn Each

Although Ben Ledi is my favourite hill in that area Beinn Each proved a good alternative when time and weather is limited plus it gave me a good look at Sgiath a' Chaise, the wee Graham i plan to climb on my next visit to Glen Ample.

Nice one Iain, we were just across from you on Meall an t-Seallaidh today, I tooks some good zoom shots of Beinn Each from it, looks great from there next to the two Munros!

You summed up this walk perfectly in a few photos, I'll need to ascend it again on the way to Stuc a 'Chroin as i've got that left to do in the middle of it and Ben Vorlich but i'm happy to do the ridge walk, even more so having seen it from the north today!