Decided to sleep in the back of the car at Inverlael to get an early start. Though this wasnt that straightforward due to it still being broad daylight at 22:30 and the car having no curtains..

05:00 and a nice, calm morning, perfect for midgies, but a little extra protein in the porridge and tea wont go amiss.

Not even 5 mins in and first wildlife encounter. A newt crossing the track. Urban life quickly and happily melting away. This walk was memorable for the contrast in the sizes of the equally wonderful features encountered, from the small newt, flowers and rock patterns to the scale of the landscape and what appeared to be Scotlands biggest ‘waterfall’.

Near the edge of the woodland the ‘waterfall’ came into view. Through the Spruce you could be forgiven for thinking you were in Yosemite or the like. 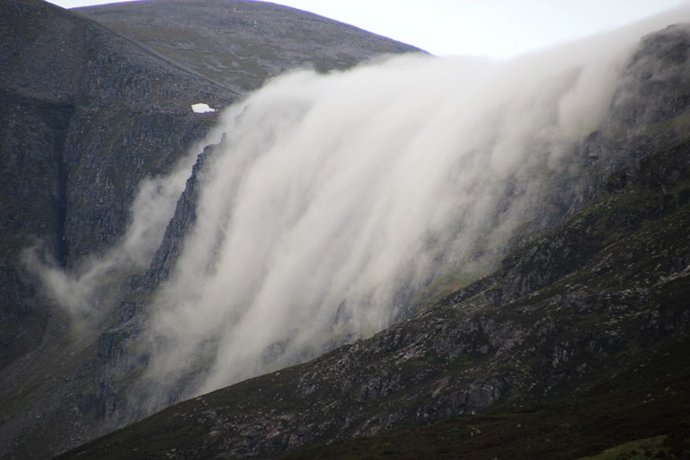 The recent drought, easy angled, well built path made for smooth progress and more importantly meant you didn’t need to watch your feet that often.
Just before the path split, the sun had gone high enough and the vast waterfall had burned off.

Before the first Munro top I had already encountered Deer, Ravens, frogs and some interesting geology. By the second, it was wider views a Ptarmigan and her brood. Progress is straightforward and less steep than I first expected. Aided by the remarkable lack of moisture, most notably seen from the summit of Cona Mheall looking down at the retreated loch Glascarnoch Beinn Dearg up next and the wall adds a notable slice of human history and interest to the walk. The descent back to the col is relatively short and painless and an early lunch stop is taken absorbing the view down the glen with the sun on my back.

The descent through the glen is a fine meander on the easy going path, not too tough on the knees and with enough interest in the burn and surrounding crags to avoid it being a trudge. Though I wonder if following the wall down the ridge would have been better. Soon the car is reached and its time for some cake and drink at the nearby craft centre before the afternoon jaunt up A’Chailleach and Sgurr Breac. Fantastic photos - the "waterfall" is extraordinary. I saw a similar thing once, long ago, on Tryfan.

HalfManHalfTitanium wrote:Fantastic photos - the "waterfall" is extraordinary. I saw a similar thing once, long ago, on Tryfan.

Many thanks Tim. Indeed, I was not expecting it at all, and its the most specific inversion I have seen to date. The quartz rock was also a more unusual than normal find.

I have a load more pics on my FB, mainly of the range of flowers that were out on the mountain. unfortunately I cannot paste a link!

Aye, I didn't expect to be that fast, and didn't feel like I was rushing. I had allowed myself 10, but going was good and I found a good rhythm. I was also travelling fairly light due to the conditions. Salomon shoes rather than the big Scarpas!