What a wonderful day, the great weather continues and there seem to be fewer clegs in this area than other walks we've done i the last month or so.

Parked at Lundie as per the normal start point for Carn Gluasaid. As per other reports, if you do the full five, you'll have a walk/jog or whatever back here at the end of the day, no fun with a narrow verge and speedy vehicles. You can try to head up and pick up the old military road for part of the slog back but that's got more ascent so I opted for a jog-walk, it's only about 3km where we came off. Where we came off is apparently an old stalker path, it brings you to gate posts in the fence on the main road - no gate though.

The walk up Carn G is easy. From Lundie you cross the road onto the track leading up to the phone mast tower and the path up the hill kicks right just near the mast tower. Starting at just over 200m then an easy path means you are up top pretty quick and without much effort. 4km and took us 1.5hrs bang on. From here you can see the day ahead of you and it looks both magnificent and a bit daunting (we did the SGR + Forcan Ridge + Sgurr na Signe in a day three years ago when the boy was 12 so we're not faint of heart). The two faraway tops look amazing, partly due to the impressive cairns that they sport.
Highlight of Carn G was a huge bird taking off and soaring around, looked like a Buzzard (not big enough for eagle and we spotted its chick which was nesting not so far away from the path, white ends to its wings). Comments welcome as am note sure which large birds of prey use ground nests.

Anyway, over to Sgurr na Caonbhairean, past Creag a Chaorainn. Nice walking and bear in mind that there is almost no bog in Scotland just now so no bog hopping, hard ground, nice and fast. Spotted some deer here. Spot of lunch and popped over to Sail Chaorainn for number three of the day, 3hrs almost spot on, nice work if you can get it compared to some other walks we've done. What's great is the impact of the nice weather on one's soul, you could walk all day every day if it was always like this (or at least until your muscles seize up).
The downside is that from here you can see the drop to the Bealach at c720m before A'Chralaig, which looks like a monster. Secondly you know you've got to get pretty much back to the top of SnC before heading down (although there is a slight traverse path. Baillie the dog bagging a munro

The Brucie bonus if that there are two tops on Sail C and the Munro top is the first one not the second one so if you're tired or short of time, you don't have to wander over unless you really want/need to. looking over to A'C from Sgurr na C

Back towards SnC, crossing past Drochaid an Tuill Easaich at 1001m, the down into Bealach Choire a Chait. This is pretty much pathless and it's quick enough down but the slog back up is hard work. Easy enough to pick a line when descencing into the bealach, no scrambling required. Cameron and the dogs bagging and eating

At this point we're also starting to check out the way off and consider it there are any options (spent a few nanoseconds on the option of coming back the same way). Met a couple of folks coming off A'C and they told us that there was apparently an old path off the spur finishing up just to the West of the waterfall at Drochaid Coile a Chait which is marked on OS maps. pen bivi at A'C without roof but with hungry boy

Lovely walk up to A'C, stellar cairn indeed and even a wee pen which you could turn into a bivvy with a tarp for a roof if needed. More food and got the map out. Annoyingly the next munro is on the other side of the map so various folding required, if only carlsberg did maps looking across from A'C to Mullach F-c, nice ridge and needles

The needles look quite intimidating, particularly if you have dogs (we had two) but in reality the path off A'C is no worse than navigating up the ridge on Mullach Fraoch-choire. 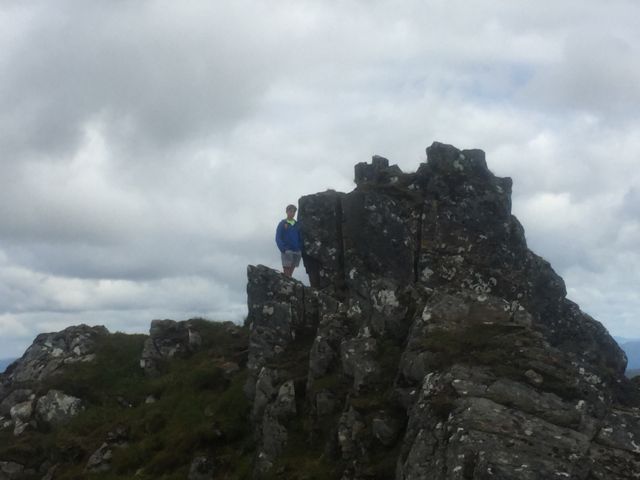 It's an excellent walk over and back, if it was longer it would match the SGR and/or Brothers and Sisters. The other cracking view is onto Ciste Dubh, what a cracking mountain that is as well (we did it before heading onto Brothers and then Sisters two years ago, another amazing day in Kintail). looking back from whence we'd come

Now getting a bit low on water, not much running water since before the first munro so decided to get off and also make sure we could make our dinner booking at 8pm in the Glenelg Inn having had a shower rather than minging. wish the water was closer

Back to A'C, then across the plateau from whence we had come and there is a brownish stone cairn to mark the cut off to come down. We kept to the side with Allt Choire a Chait where the contours are relatively gentle. This spur is easy and grassy then you can pick up the old path from just below the nose of the spur although it does take you a bit zig zag back away from Lundie direction.
Straight to the waterfall area to slake our thirsts (all four of us that is), left the boy and dogs at the next lay by on the south side then bashed off to get the car. The snack bar/van in the Lundie car park had cold soft drinks, parted with £3 for two (still cheaper than any drink in the Cluanie Inn I think).

I've still to walk on this side of the glen and hope to do it this year, so it's good to read this - hopefully you'll be posting the pics fairly soon!?!

I wouldn't think that your raptor is a buzzard - they're not ground nesters as far as I know - perhaps someone like David Main can comment.

The note on lack of water is useful - obviously this is an issue for ridge routes, but bealachs don't always have flowing water. I'll probably do a camp somewhere on the ridge, so knowing where water is and isn't present is good (ran out on my last ridge camp!!! - not good!!).

Ref the jogging: Walking or jogging is a pet hate of mine, so I always try to close linear walks with a bike-and-drive... As I recall, when we met on Beinn a'Chreachain you'd cycled in to the start of your walk, and this is what I did for the south Cluanie Ridge.

Photos now up, my son has read a couple of walks that you have posted up inc Ben Allder which is in our sights this year, what about the Fannichs in a day ?
Thanks for the feedback, some of my reports are super short, really just additional tips because there are so many excellent reports up there. It's also nice adding some route options

Water in bealachs not very safe apart from for dogs, it is an issue and, as you say, these ridge walks are light on burns - we left the dogs behind when in the Grey Corries a couple of weeks back.

Kintail def one of our favourite areas despite no-one stopping to give me a lift this time (thankfully hitched v quickly after SGR and Bro/Sis days, long way back to car !)