I went on a hiking expedition mostly in the Glen Calvie and Freevater forest region (I’d never heard of these before either). The aim was to do as many Corbetts and Grahams as possible, weather and legs permitting.

It was not an auspicious start, with the rain lashing down over the Kessock bridge and visibility towards Ben Wyvis nil. However, by the time that I arrived at the Glen Glass car park the rain had downgraded itself to drizzle. In a way this was harder to respond to because it raised the perennial of issue of whether or not to don full waterproofs. The danger is that if you ignore the drizzle because it’s drizzle then after two hours you’ll be soaked (and probably have reached somewhere with hypothermia inducing winds). I went for the cautious approach and sweated it out in the Goretex

Starting out at 10.45am the walk took me through some nice pine forest towards Loch Glass. It was very reminiscent of Glen Isla where I help out with Duke of Edinburgh. Along the way I spotted a mysterious object set back from the track that resembled an Egyptian mummy. The presence of an open shelter nearby suggested that the figure was there for target practice - I’ve seen plenty of model deer set out for this purpose before, but people? Hmmm…. motivation to stay on the path! 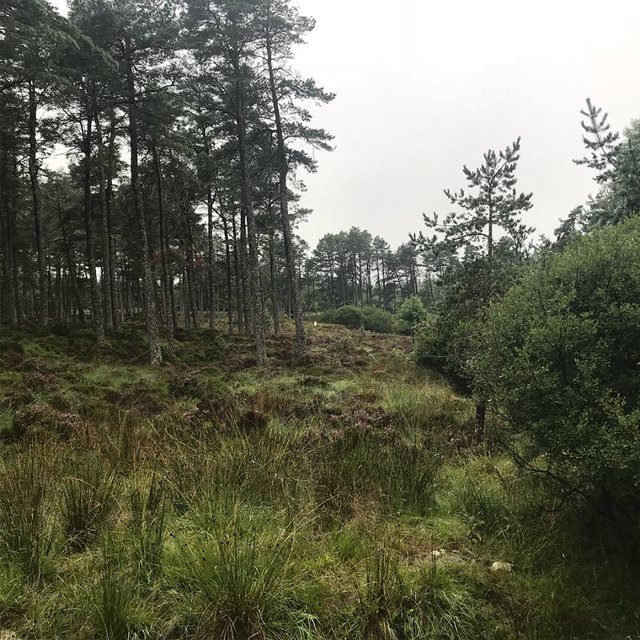 After the loch it was a steep climb through more trees to reach open hillside. My attempt to have lunch was aborted by an attack of the midges so I pressed on into the mist past many eerily active wind turbines and then onto a broad boggy summit ridge. This got me to the top of Graham number 1, Meall Mhor, at 2.30pm (no view) and it was then a case of reversing the walk to return to the car for 4pm.

After second lunch the next stop was Baldoon farm at 5pm for an evening stroll up Beinn Tharsuinn, another Graham-level hill. This initially promised to be a shorter and steeper walk. A track took me to the edge of a forest and then I ascended moderately deep heather to the south summit, which was covered in cloud. Many caterpillars were out in force along the way and had I been hungry there were lots of blaeberries available to sample. At some point I looked at the map and noticed that this hill’s middle and north summits are given the same height. This meant that I would need to visit both in order to get it in the bag. At least the first summit has a trig point to keep things interesting; I couldn’t find anything on the northern summit, just a cairn a bit further on. 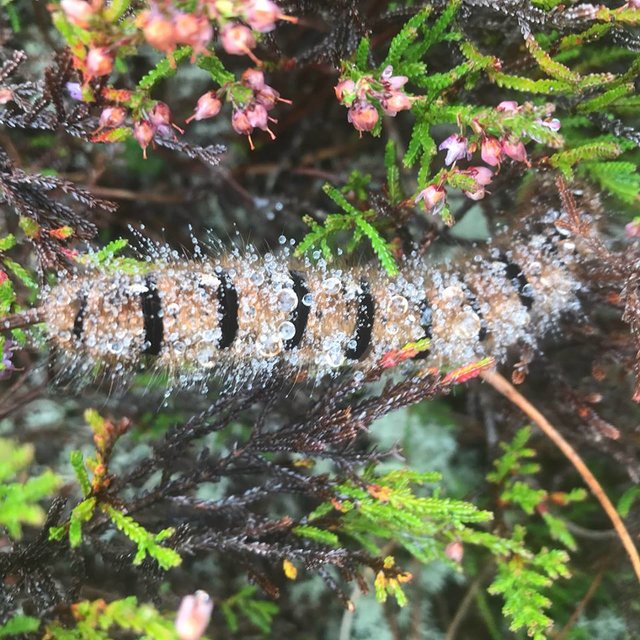 Hills done for the day the poles came out and I descended through very boggy terrain on a bearing towards a stalker’s path. Despite conditions being dry, the combination of clag and bog resulted in soaking trousers (#shouldhaveworngaiters). I was back at the start at 9pm for dinner, having past about 100 deer in the last half-mile that had come down to spend their evening in the field by the farm. To complete the day it was a fog light-lit night drive over Struie hill, down to Ardgay and into deepest darkest Glen Calvie to be ready for the next day’s walk. 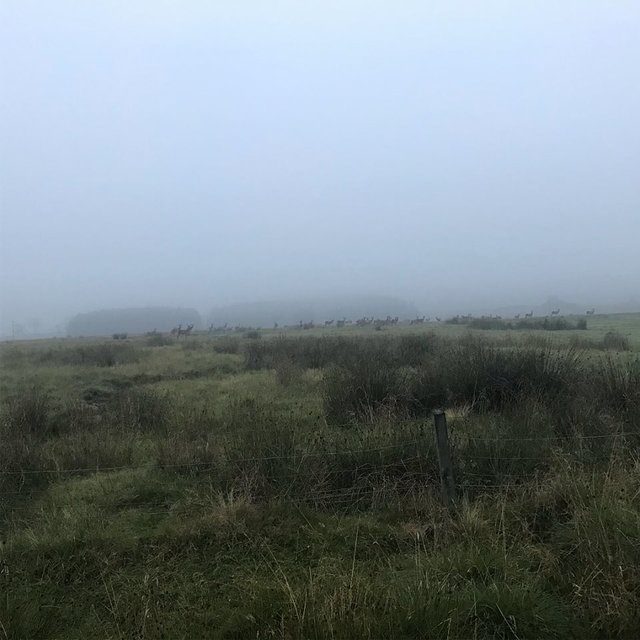 I started off at 8.30am, crossing a bridge and entering Glencalvie Lodge. A discreet sign indicated where to go so that I wouldn’t end up unwittingly walking across the back garden of the lodge. It all looked very salubrious, with tennis courts, immaculately cut grass and ornate statues. I followed a track south towards the Corbett-level hill of Carn Chuinneag, and then took a steep stalker’s path towards the top. As usual, the weather knew what I was doing: initially teasing me with good views then providing cloud and rain for the summit experience at 10.45am. I didn’t spend very long at the trig point, descending to a large boulder for shelter and then heading back down to the path. 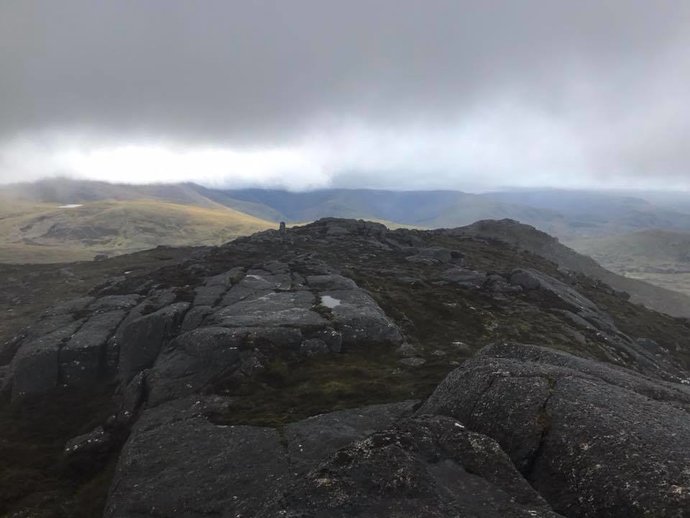 A cross-country walk took me down, along, and up to the Graham of Carn Salachaidh (the hill of filth) in time for lunch and much sunnier conditions. As I munched on my wrap and studied the map I decided to take the more direct route back to the car park rather than returning by the track I’d walked in on (Pros: 3k shorter, minimal reascent, con: possible challenging stream crossing). Fortunately the stream crossing was very easy and there was even an unmarked bridge lower down its course. I was back at 3pm to start the preparations for the next part of the day: an expedition to one of Scotland’s most remote Corbetts: Carn Ban. I had my dinner (so I wouldn’t have to carry a stove/fuel with me) then packed my tent, sleeping bag and breakfast food into my rucksack and had a 20-minute power nap. I set off at 4.20pm, this time heading west along a track to Alladale Lodge for a 5-mile walk in. The woody, rivery scenery was lovely and it was much more pleasant than many of the Munro walk-ins. As I approached the lodge, a helicopter flew over me and landed on a path of green by the river where a land rover was waiting: all very Jurassic Park-esque! 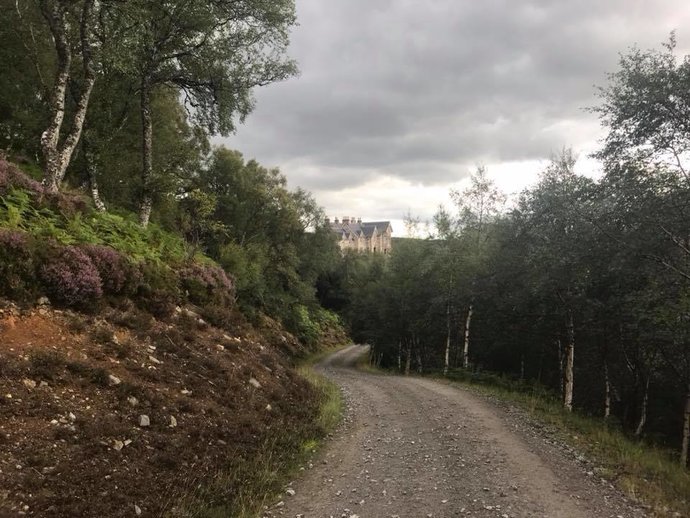 I continued on the track as it climbed up the Glen, surprising a few stags and passing a couple of remote holiday cottages as the forest gave way to a large open U shaped valley. At this point the mind games started: was it sensible to climb the Corbett tonight? Would I have enough food? Would I have enough energy to walk out the next day? Everything looked so big and far away! Luckily the track continued for much longer than was shown on the map, so I didn’t have to carry my heavy pack over difficult ground. Having got to the turn off / turn up for the Corbett at 6.30pm I quickly found a flat area of grass for the tent, had second lunch and assessed the map. It’s amazing how a bit of food, rest and a lighter pack raises the morale: after 10 minutes I was good to set off and get the Corbett (the map had shown me that there were no other easy ways of doing it: at 6km away from it I was practically there!). 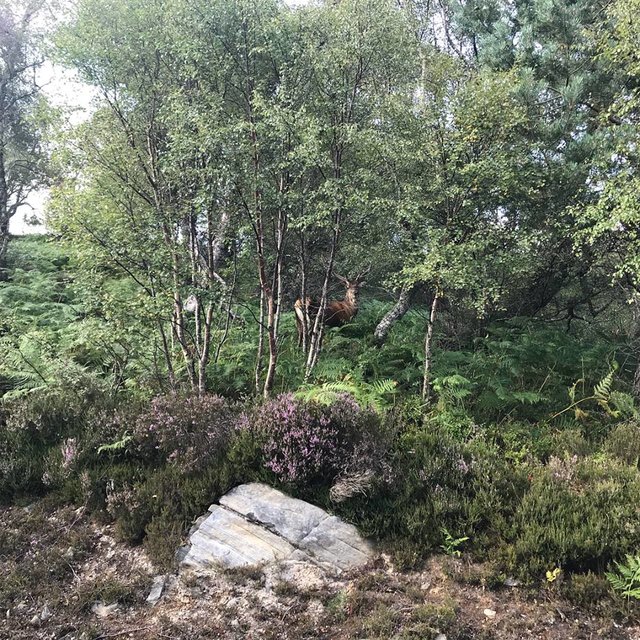 The ascent turned out to feel shorter than I thought it would and in what seemed like no time I was on the plateau. The going was easy as the grass was short, the stones were small and the clouds had finally lifted. I tried to traverse as much as possible to avoid unnecessary ascents of subsidiary peaks and stay out of the wind, which had picked up substantially over the afternoon. By 8.40pm I was stood on top of Carn Ban enjoying the setting sun over Seana Bhraigh (you know you’re in the wilderness when one of the most remote Munros is nearer to civilisation than you are…). I returned by the same route and was back at the tent at 10.45pm brushing my teeth and trying not to think about the film Dog Soldiers. Step count for the day: 66000! 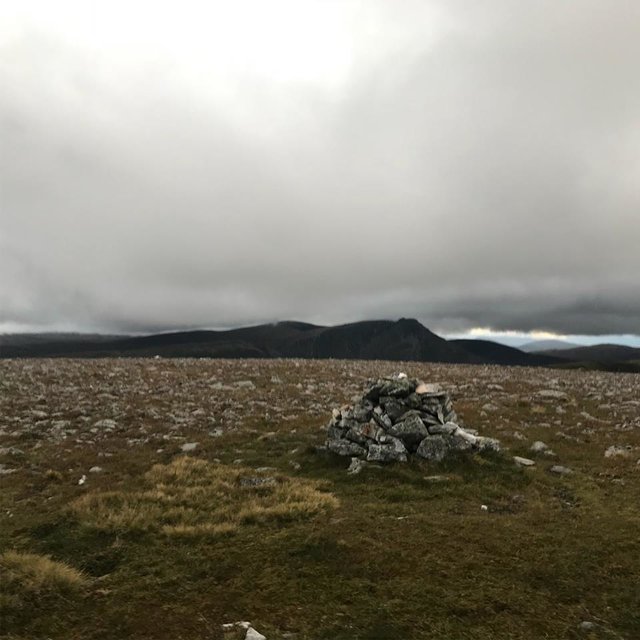 After a cold night I was up, fed and packed at 7.45am ready to ascend the final hill of the trip, a Graham called Carn a’Choin Deirg (‘the cairn of the red dog’). I had to deploy my midge net for the first part of the ascent as the midges were matching my walking pace too well. The route followed the course of a steep stream through thick heather. One of the basic rules of drinking from mountain streams is to always check the water higher up for dead ungulates and today there were three in various states of decomposition (1 deer, 2 sheep). The stream gave way to gentler grassy slopes and I reached the top with yet another trig point just after 9am. All that was left to do was descend to the stalker’s path, follow this until it hit the lodge track and then enjoy the walk out through the trees. 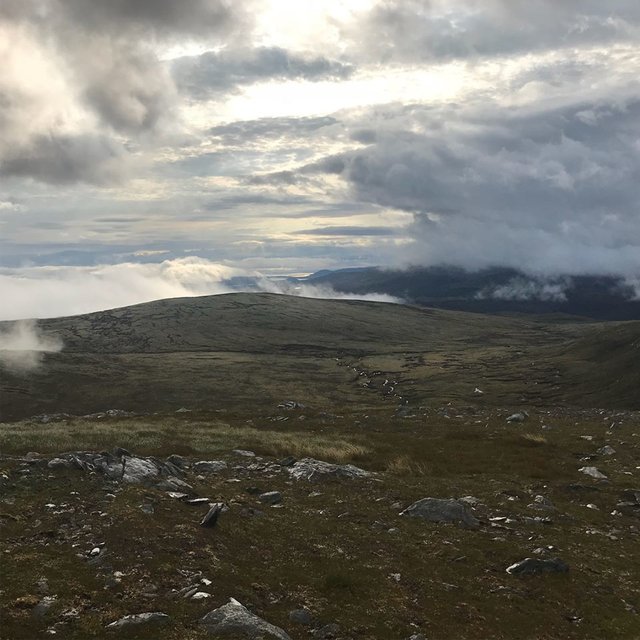