I'd been off sick with a sore back, and we were just dondering about Sutherland in the 'van, having a nice relaxing long weekend break. Second day we wound up in Tongue, walked up to the Castle - very suitable after dinner amble - and were watching Ben Hope, with it's head in the clouds. We were there, it was there - we decided to camp and see if it was in play on Saturday, and if my back would stand it! We spent a nice quiet night, sitting round a campfire, drinking beer, with the kids chasing the dog in the dark, and no midges. Small pleasures.

There was plenty of wildlife in the glen that evening.

some wild, some not so wild

We had a clamber over the broch at the foot of the glen too - not as well preserved as those in Glenelg, but impressive all the same.

Last time I went up Ben Hope, I wasn't paying attention - but it definately wasn't using the "current" route... as I recognised nothing until the final ridge, but this view was familiar, so I guess we must have came from the South somewhere... 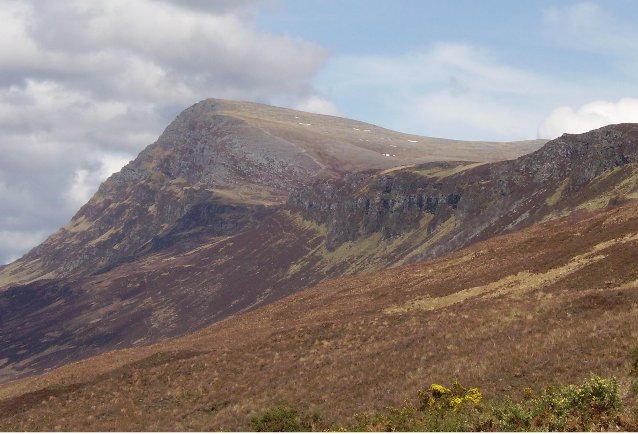 Anyway next morning I was moving well, so we drove up and parked in the recommended starting spot - only a few other cars there at the time - and did the "full cooked breakfast" thing while dog did the "meet and greet" service as more cars pulled up. People watching is great fun, and we saw some *very* pro looking walkers (polished Defender, top class kit, very fit looking young couple...) casual walkers (battered old car, older gents, ex army gear) and everything in between. We made lunch, re-read the map and my guide book (2-4 hours up and down according to Cameron) and decided to travel light, with myself no carrying a sack to give my back a chance to last, and left the food behind. Bad call - sorry guys!
As we left, the car park was almost full.
The route is exactly as described on the site! No surprises there, but what isn't mentioned are the amazingly beautiful stream with it's waterfalls and pools - I kept stopping to admire (and de-kink my back). After the first steep pitch, the route flattens for a bit, then switches twice to gain ground around two crags. Quite nice is that you can see the groups ahead of you appear and disappear regularly as you gain height.

There was quite a strong wind on the day, mostly Southerly, which didn't affect us much on the way up, but the groups coming down looked *cold*. After the second switch, you're on the ridge proper (very soft ridge) and walking up past a series of cairns. These managed to completely irritate my youngest who hates false summits with a passion, and in spite of my regular distance left estimates, chose to see each cairn past, and false crest spotted, as a personal insult...

As we ascended we spotted a young dude coming off the mountain - I didn't get his name, but at six Ben Hope was his thirteenth Munro. He'd walked up his first at two (!) although he'd been carried back down that one - a future mountaineer in the making I think. "There's an example" I muttered - cue black looks and more sulking. 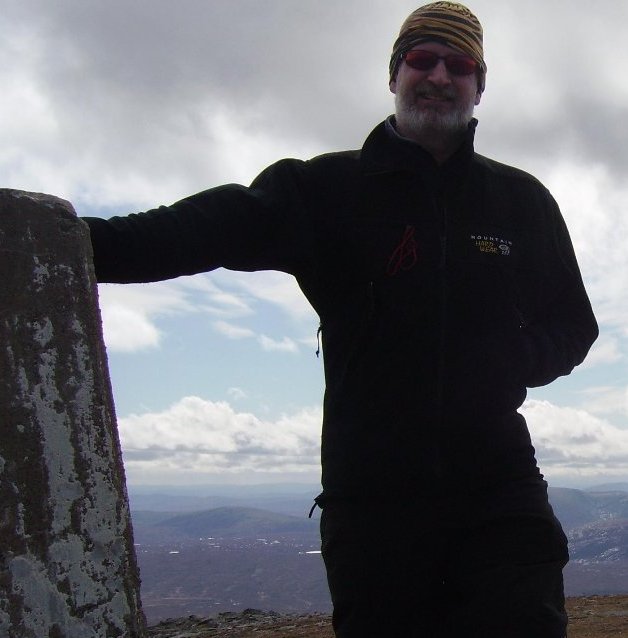 Title says it all... I was happy to make it!

As we saw the trig point, the very "pro" looking couple were leaving, and we had the top to ourselves - lovely and quiet. When we finally hit the summit all thoughts of tiredness disappeared and after some pictures

Great views towards Dounray and Orkney 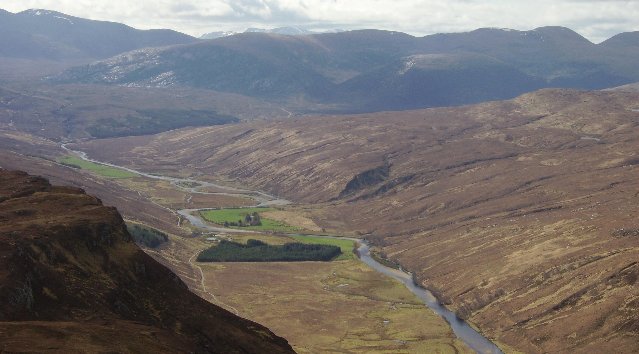 And to the south, Ben More Assynt, with snow was visible over the hills

we cozied into the shelter and kitted up quickly (gloves hats and hard shells) and made short work of the snack bars, energy drinks, hot chocolate and lukewarm coffee - it was really cold when we'd stopped, and we piled on the layers.
As we were finishing up I heard voices from an odd direction, and dog went to meet and greet three very fit and cheerful blokes (and a dog) up from the lakes for a week. They'd seen a Rab catalogue, and obviously all liked it.... I've never been so close to so much Rab kit before! We chatted a bit, I perused their route up on their map, and had a chat about the route and options for the off. South, east and west I was reasonably sure of... but North? They seemed to think it was doable (but looked doubtful) and wifie decided for me that we'd go down the north route - she didn't fancy slogging back into the wind down the ridge.
We said our goodbye and trudged off just as more folks arrived... and once more we've deviated from the sites "recommended route" - I'll get a reputation if I'm not careful.

We went due North from the shelter, and rapidly started to lose some height over great angled slabs, which my son used to give me a heart attack by slipping, and then going down clutching his leg with a scream - just a nasty shin scrape thank goodness - and then a boulder slope as we angled East towards Ben Loyal. 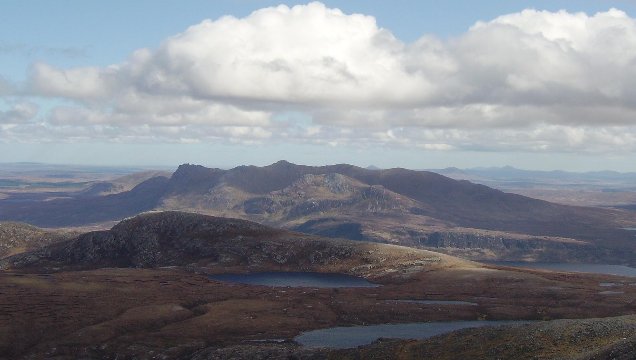 As we cut down this very steep slope, the path was far from clear, and we wound up at the top of a chimney that I didn't like the look of at all - still on an unforgiving slope high above the corrie, with no route round, and as I cast about for an alternative daughter and wife dive in and scramble down. The repeated shouts of "below" giving away far too much for my liking. That left my son, the dog and I - and my son dived in too. Dog was going mental, casting a wide range back and forward as daughter called from below, but neither of us could find any other path - so I climbed in sideways in order to pull him after me - I must be MAD. After manhandling him down the first two (very) awkward steps he bounced out between my legs, thankfully not pushing me, and scrambled out leaving me to climb on alone, with growing respect for the family. I know they like climbing and scrambling, but this was nasty, wet, loose, flaky and mossy - from my rock hopping days I'd say a VS if you were going up... not quite HVS, but I'd prefer a rope and no dog just from the exposure element... ah well.
By now the family were all ranged on the east running ridge watching me and calling "encouragement"... yes, that sort.
I joined them and took a photo - really wish they'd had the camera to take a photo while I was on the route to give scale, because the chimney looks so insignificant here, but trust me... 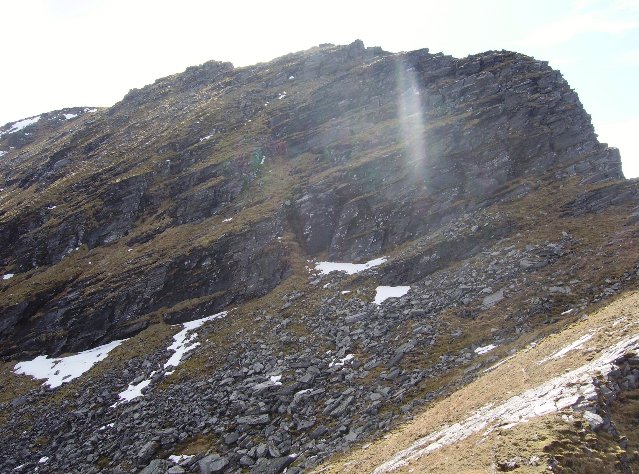 Looking back west - Chimney is almost centre, just to the left/above the snow bank - deeper and less vegetation than it looks!

The rest of the drop off the East ridge was just rock/boulder hopping down increasingly steep slopes (yep - very steep) to the small lochan, then following a bearing walking out to the path, which we intercepted just by another very pretty small lochan. By now we were WELL past four hours, and the family were STARVING. I was getting death threats, amy daughter had been complaining of a sore tummy since we left the top, I found that all the spare "emergency rations" in my OMG kit had been eaten too, and someone asked "are you tasty"... We stepped out pronto!
Wifie kindly made a speed run for the 'van, and I dragged (literally into the face of the wind) two somewhat hacked off teenagers in her wake rather than wait and suffer interminable "why isn't she here YET" questions.
Once wifie picked us up, the six hour old sandwiches were devoured, and we drove on to find a small camper in "our" overnight spot, so only paused for a brew before leaving.

There were two vehicles parked at the bottom, including what appeared to be a home converted campervan, that we'd seen parked up south of Altnaharra the previous day - I guess they'd been on Ben Klibrek as well.

Top walk, very exciting exit route, and what a day!

yeah, I agree... really like ben hope, again only when its early to avoid the rush, or in winter.
have considered that descent before and the last time I was up I took a wee jaunt down a hundred feet or so, figured it would be a lot easier coming up that way than going down tho...

There are not that many hills I willingly double (or more) but no hesitation with Ben Hope!
In spite of starting so low, it's not an arduous climb (at my speed) at all, especially as the gradient seems to ease all the way up, and when you can see anything from the top, it's glorious. So different from the central hills where there can be handfulls of Tops seemingly almost within throwing distance.

By choice I too would go UP the NE ridge rather than down - but I'd then choose to loop back down the East escarpment... in spite of that making for an EPIC days round-about travel up what should be a somewhat short and simple hill!

Excellent report, good photos of an exceptional place. I went fishing in a hill-loch up there and caught arctic charr, left there since the ice-age.

Caberfeidh - you want to watch what you catch when you go out into the wilderness!

Well that gully route doesn't look my thing so I guess when I do Ben Hope, I will be just sticking to the 'tourist' route or whatever! You have a brave family. I know what you mean about the dog though... I had to help manhandle my friend's very heavy collie down some chimneys on Pen Yr Ole Wen and up some scrambles on Moel Siabod's Daear Ddu ridge...

On the professional v casual walker front I have to disagree with your observations though I'm afraid... the serious walkers are usually the ones with the battered cars as they're the ones not interested in posing in the latest gear/biggest car - they just want to get to Scotland and get on with it! All those miles tend to make the car look old and battered anyway.

Great report though - and well done at winning the April prize

A superb report Myth, really enjoyed your account of the descent.