A lovely walk last Saturday, before Storm Callum's dodgy support act arrived on the Sunday... Beinn Bhreac-Liath ("Speckled Grey Hill") and Beinn Udlaidh ("Gloomy Hill") from Glen Orchy.
I feel that I've somewhat neglected Corbetts recently at the expense of Munros (my main summer target) and Grahams (which are just a nice height for the winter), so this was part of an attempt to redress the balance. Beinn Udlaidh has always particularly enticed me because of a strange geological feature on its eastern flanks: a huge volcanic dyke composed mainly of quartz, an Igneous Intrusion no less - possibly from the Mull supervolcano away out west during the Age of the Dinosaurs?? - as a non-geologist I'm guessing a bit here

. Anyway, it's an impressive thingamajig that is easily visible from miles away when driving down the A82 from the north.
As forecast, the Saturday 6th October dawned bright and sunny, with not a breath of wind

. After a not-particularly-early start, I was relieved to find plenty of parking left at the bell-mouth around a gateway into the forestry, just west of the wee bridge over the Allt Ghamnain, which itself is about 100 metres west of the isolated cottage at Invergaunan. There is room around the edges of the forestry gate for about three cars parked carefully. I crossed the bridge and headed back up the B8074 for a short distance to take the gated approach track to the cottage. The first target hill, Beinn Bhreac-Liath, was looming up to the left of the track, with its steep grassy flanks still in shadow. I headed off to the left of the track once I'd gotten about halfway to the cottage, and then just made a beeline straight for Bhreac-Liath. There was a lot of long tussocky grass and a bit of bog, but the weather was spectacular and wet feet weren't going to dampen my spirits! It was a bit of a slog up Bhreac-Liath's pathless and rather unrelentingly steep grassy flanks, but as is often the case with a steep ascent, there were good views for distraction. Across the glen, Bhreac-Liath's twin, Beinn Udlaidh, was proudly showing off its impressive Igneous Intrusion: Looking the other way, Beinn Dorain was keeking out from the end of Bhreac-Liath's north ridge: A bit higher up, there was a grand view out north to Bridge of Orchy and across the vast flats of Rannoch Moor: As ever, it was a relief to reach the top of the steep bit. Although they are steep-sided, both of these hills have conspicuously flat summit plateaus, strewn with lots of tiny lochans. One of these even had some ice in it, and enjoyed a grandstand view of the Black Mount Munros: It was further than it initially looked to Bhreac-Liath's two rival summit cairns, but the lawn-like grass on the summit plateau gave quick going. More fine views from the two cairns

: there was a particularly interesting outlook on the group of five tightly-clustered Corbetts around Beinn Odhar. I'm itching to have a go at that lot, but the amount of ascent and re-ascent involved is a tad daunting: definitely one for a long summer day, I think! Beinn Dorain and Beinn an Dothaidh were lording it a bit out east: And out to the north-west, the Etive hills were looking very impressive: After passing the time of day with two other parties, I headed off down Bhreac-Liath's steep but mainly grassy south-east ridge. There were a few wee crags that required to be jooked round - not a problem in good visibility, but it could need care in Clag. Soon enough, I got my first proper look at the ascent route to Udlaidh, and of the depressingly boggy-looking bealach between the two hills. Ah well, the sun was still shining, and it didn't take long to make my way down. From closer up, the bealach didn't look quite so boggy after all. It is crossed by a long line of deer fence, which thankfully has a handy new gate in the middle, avoiding any need for ungainly clambering After the gate, a Path of all things appeared, taking the easiest way up Udlaidh's steep and crag-ridden east ridge. The path made the ascent easy enough but it was still steep. Well, as I've commented before, when the going gets tough, I tend to stop for lunch

. I found a pleasant spot amidst some boulders, enjoying an unexpected view south-east towards Tyndrum, with Lochan na Bi in the foreground. Looking back across the bealach towards Beinn Bhreac-Liath: A bit higher up, there was another interesting view of the Beinn Odhar group of Corbetts over Bhreac-Liath's shoulder: Having puzzled over this shot a bit, I think it is looking south towards the Crianlarich hills: I'm afraid I can't remember! That must be Ben More & Stob Binnein in the middle of the shot, though, no? Apart from the lunch break, it was quite a short ascent, and soon enough I was up at Udlaidh's summit environs. There apparently used to be quite a bit of summit clutter, including a large and well-built cairn just north of the true summit, plus the decomposing remains of a radio mast. However, the Forestry Commission (who own all the land around these two hills - handy this time of year, since no stalking restrictions!) recently seem to have tidied up a bit: the remains of the radio mast are gone, and the previous confusingly large and well-built non-summit cairn seems to have been cut down to size a bit.
The true summit, which is on a quartz outcrop just a hundred metres or so to the north, now sports a tiny cairn of its own. There should have been a grand view of Beinn Dorain from here, but unfortunately it had now decided to put on a hat of Clag At the true summit, looking towards what's left of the larger cairn: The inevitable selfie at the big non-summit cairn: Looking northwest to the Black Mount and Etive hills: I headed off almost due north, hoping to pick up the line of the quartz dyke and follow it down to the edge of the forestry. Just before the north ridge properly got going, there was another pretty lochan with a view of the Black Mount: Just below this, I picked up a line of quartz rock heading north-east, which I mistook for the long quartz dyke. However, this one turned out to be a separate Igneous Intrusion just to its south, and it ended at a fairly substantial crag

! I'm glad I wasn't doing this descent in Clag. 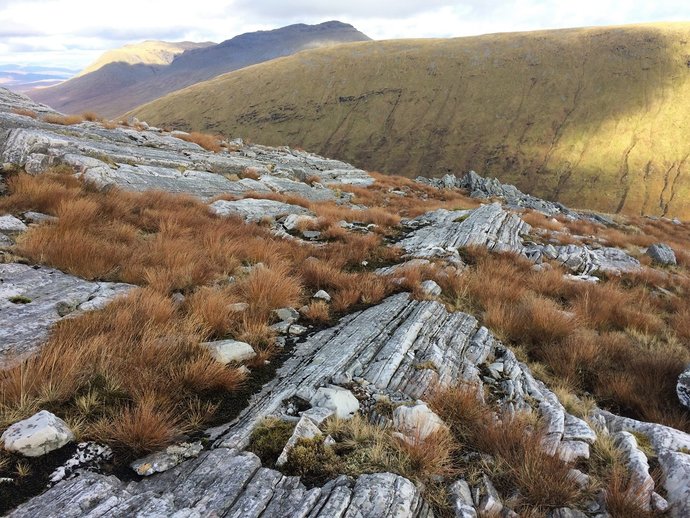 In today's good visibility, it was easy enough to track back uphill for a short distance, then cut down steep grassy slopes towards the Real-Deal quartz dyke, which was clearly visible a bit further down the ridge to the north.
It really is an impressive structure, with parts of it having been exposed by erosion so that it sometimes towers well above the grassy slopes at its flanks. It is also very handy in navigational terms, and I just headed straight downhill along its right-hand (east) edge towards the forestry. At the bottom of the ridge, I headed down the last bit of steep grass to a fence junction, where a substantial deer fence to the east meets a much lower and older fence cutting across the hill that marks the top of the forestry. I wasn't quite sure what best to do here, and in the end I crossed the low fence but not the deer fence, then made my way downhill on steep tussocky grass between the edge of the forestry and the deer fence. It was fairly slow going, but the terrain on the other side of the deer fence didn't look any more tempting! However, despite a few Close Encounters with unruly adolescent spruce trees, there were traces of path to reassure me that at least someone must have been this way before, and when I got to the bottom of the hill beside the Allt Ghamnain, I was relieved to pick up a clear forestry path (almost a track in some sections) that led with minimal fuss back through the trees to the gate at the car park.
A very pleasant wee outing, and another couple of Corbetts to make my tally a bit more respectable, I suppose

Great timing. Was looking at doing this pair soon 👍 looks a nice walk 😊

Really lovely at this time of year, if you can catch a nice day weather-wise. Both of these Corbetts have interesting summit panoramas, with unfamiliar views of a lot of familiar hills (most of which I was fairly hopeless at identifying, I'd have to confess

Nice one Kenny, looks like a decent walk, nice pics too.

Aye that's Ben More and Stob Binnein just left of centre in that pic, should show up in a panorama if you click this link.

Taken from http://www.udeuschle.selfhost.pro/panoramas/makepanoramas_en.htm, hours of fun for hill geeks and great for getting to know your hills and views.

I used to faff about with google earth until I found this, I really hope it never goes offline as I use it a lot!