A nice wee TR to celebrate 10 years on this wonderful site!

Debbie and I had offloaded Ailsa to my parents and booked ourselves into the Braes Studio apartment in Ullapool for a few days. I had been through Ullapool on numerous occasions en route to or from some hill or other and had always stopped to avail myself of some of its prime amenities, most noticeably the Seaforth chippie or the beer aisle of the local branch of Tesco. However I had never stayed in the town before now and was hoping once again (for seemingly the umpteenth time) that this visit to the far north west might provide the opportunity to grab arguably the most prized Munro scalps of all, namely the two Munro summits of An Teallach. Debbie has forbidden me to tackle An Teallach without her. Not that she is worried about my safety (deep down I suspect she may actually welcome the insurance payout!

), more that it is high on her "to do list" as far as Munros are concerned. It is a pretty short list to be honest, so I have little option but to go along with it. Besides, it has provided a pretext for several trips together to Wester Ross but so far the weather gods have always been unkind to us, certainly as far as any attempt on An Teallach is concerned. Certainly not one to squander on anything less than a top notch weather day.

I imagined a scenario similar to our stay in Aultbea last year (or was it the year before????? .... jeezo, old age certainly does not come alone!

). On that occasion we did a walk together the first day and then Debbie was happy to potter around herself doing photography stuff while I ventured into the hills on my Jack Jones. And so it turned out this time. Her one non-negotiable for this trip was to nip up to Stoer Lighthouse and take a wander out to see the Old Man, so I suggested that we do Stac Pollaidh together on the Thursday and then head up there afterwards (via the Lochinver pie shop of course!)

She thought this was a fair plan - the fact that the walk looked tasty yet would only take a maximum of 4 hours and climbed to only just over 600 metres were all deemed satisfactory. A decent forecast was an added bonus and we agreed to say no more about the forecast for the tail end of the week!

We got an early start and were into the already busy car park before 10.30 before setting off to follow the textbook anti-clockwise heart shaped route around to the back of the hill and up to the saddle before tackling the crazy ridge itself and then back via the west side of the hill. The tourist shot from the car park

It was a busy enough place without being absolutely hoaching. There was the bloke with his young daughter "manning base camp" while his wife tackled the summit. Then there was the young(ish) French couple. My French should be pretty good, all things considered, but I didn't need language skills to tell that he was keen, she was considerably less so. 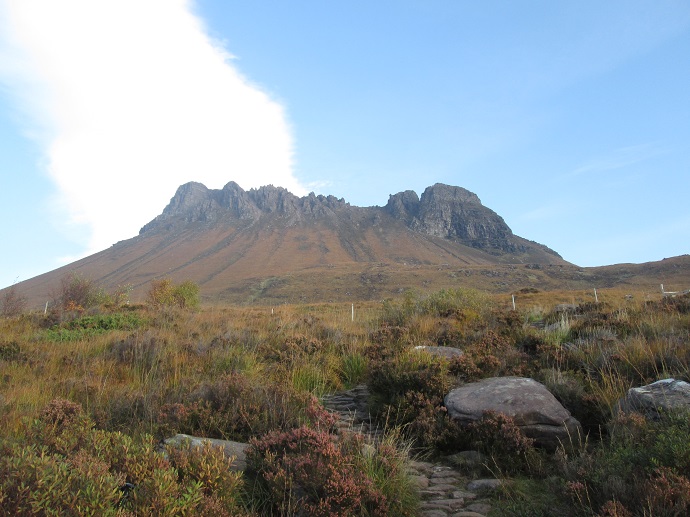 Five minutes in, just out of the trees Across Loch Lurgainn to the Coigach Grahams Cul Beag to the east The ridge in full autumnal glory

We climbed around the eastern slopes of the hill with views developing all the time of Cul Mor and the various lochans that pockmark the Coigach and Assynt landscapes. Then came a rather hazy Suilven and the two Dutch walkers. I assume they were a mother and daughter team. Unlike my French, my Dutch is decidedly sketchy, but I know a bad vibe when I see one. Mother seemed to be toiling, daughter seemed to be getting a touch exasperated. Approaching the saddle from behind

Then the first of our cameo roles took to the stage. Or to the air to be more accurate. The steady thud of chopper blades began to get louder and louder and then we spotted the beast circling in front of Cul Mor and flying out towards Suilven before turning back and heading straight above our heads. Debbie got a bit over excited trying to capture the beast with her fabby dabby capturing device and took a wee tumble, bruising her leg in the process. The beast then disappeared from view behind the ridge but the noise of the blades remained constant as if she had put down somewhere. I briefly checked that Debbie was OK before scurrying off towards the East Top to try to capture the beast with my less fabby dabby but considerably lighter capturing device.

I raced up to the central saddle and dumped my pack before sprinting up towards the East Top and the still constant sound of the blades. I could almost smell the beast and was only about 10 seconds or so below the summit when the noise of the blades changed and I could tell that the beast was lifting away from the ridge. Whether she touched down or more likely just hovered above the summit I will never know but I cannot have missed her by more than those 10 seconds or so. I arrived just in time to see her heading out towards Cul Beag and Cul Mor before circling back to the north and around the back of the Stac Pollaidh ridge to head out towards Ben More Coigach and Loch Broom. Tell that chopper to get back here NOW!!!! Circling back towards us About to disappear behind Stac Pollaidh Cul Beag from the East Top

Clearly the Bristow Boys had just been undertaking some training and treated us to a close up display in the process. After that, there was nothing else for it but to take to the gnarly, crumbly, in places almost surreal pinnacle ridge that would eventually lead us to the foot of the "bad step", the final wall barring progress to the true summit of the hill. The East Top from the central saddle Debbie about to start onto the ridge 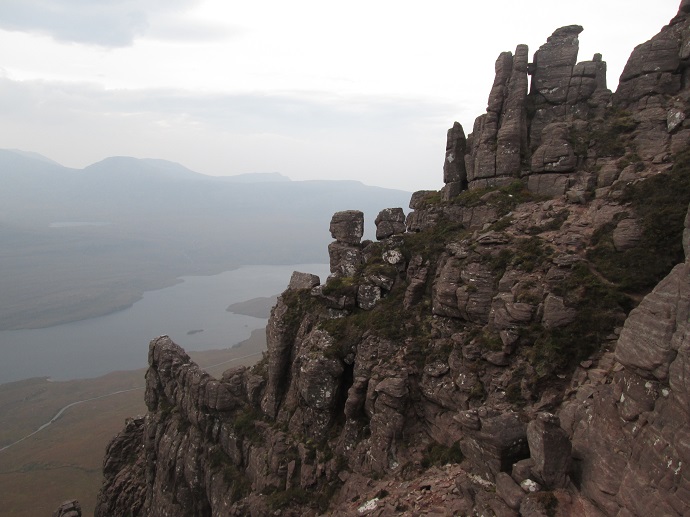 Down one of many gulleys When we got to the "wall", we dropped to the right (north) only to find our way barred by an impossible rock climb. A guide with Haven Mountaineering and his female client were crouched there having a break and the guide told us to go back up to the little col and down the other side where we would find an easier route. It still took a bit of humming and hawing, especially from Debbie. She was still a little shaken after her stumble and although she felt confident enough about getting "up" the wall, she felt less confident about getting back "down". From just above the final col, looking towards the summit Debbie weighing up the options - down or up????

Eventually I managed to pull myself up the face in a series of rather undignified but ultimately successful moves and Debbie followed me up courtesy of a bit of dragging up from above. She was well chuffed at the summit, especially when I told her that she had reached arguably one of the most difficult and most technical summits on the mainland. The route back down to the col was relatively straightforward, using the slanting chimney to the south route and once down to the col, a short descent north through a wide gully took us back to the path which would lead us back around the western slopes of the hill to the car park, where the second cameo actor of the day put in an appearance. The classic profile from the west A "mountain in miniature" right enough

I had just got my boots off and was chomping on an apple when who other than The Rodmeister drove into the car park. He had been lurking in the far north west for a few days and was on his way back southwards having done some of the far north Corbetts the previous day. We had a good chinwag for ten minutes or so before bidding one another farewell, hopefully until the Torridon meet next month.

A fine read as always Graeme

Ha, wait until you see my Beinn Ghobhlach report!

Good stuff looks a grand hill .... must take a trip North next year myself !