This walk has it all for me – a long, challenging expedition, a good walk in, lots of wildlife and flowers, a variety of spectacular scenery, a river crossing, a spot of scrambling …. what more could you ask?

We parked at Keiloch just west of Braemar (another £2.50p worth of 5ps required!) and started the long walk-in past Invercauld House and Alltdourie into Gleann an t-Slugain. It was red squirrel territory and it wasn’t long before we saw one scampering across the road and up a tree. The track follows the narrow glen 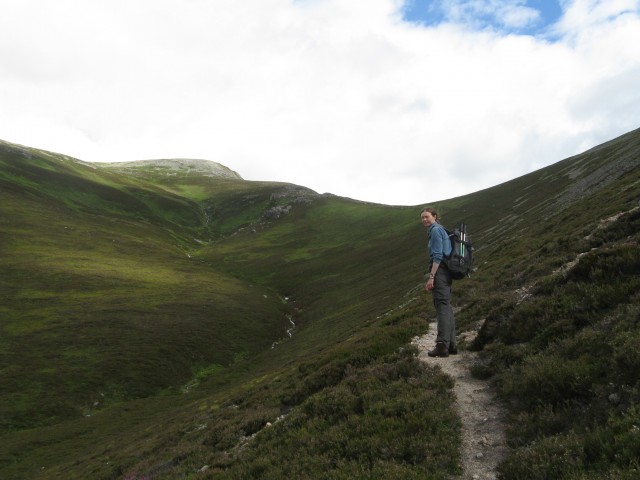 until it reaches the ruins of Slugain Lodge. On emerging from the glen the huge mass of Beinn a’Bhuird appears. A path goes off to the left and descends to the Quoich Water. We had hoped to keep our feet dry but after all the rain we have had recently this was a bit optimistic. So there was nothing else for it but boots and socks off, trekking poles out and a refreshing paddle. We couldn’t see the path indicated on the map at first and so we thrashed through the heather for a while towards the bottom of the ridge leading up to Carn Fiaclach. We did pick up the narrow path after a while: it winds round to the back of the ridge before climbing gradually up the hillside. Gravelly, grassy slopes led up to a corrie which still held a couple of small patches of snow and we finally emerged onto the plateau of Beinn a’Bhuird. Bypassing the south top and peering down into the wonderful Coire an Dubh Lochain we arrived at the rather disappointing summit – a smallish cairn plonked in the middle of the plateau. This is the only disappointing thing about Beinn a’Bhuird though. You can see nearly all the entire Cairngorm range on one side and Ben Avon on the other whilst the Lochnagar range is behind you. We descended towards Cnap a’Chleirich and were overtaken by rain and low clouds. The rocks at the top made a good lunch spot and then we went down the bealach between Beinn a’Bhuird and Ben Avon. This is another magnificent place with Garbh Choire dominated by Stob an t-Sluichd and glens running north and south. After a pause for photos 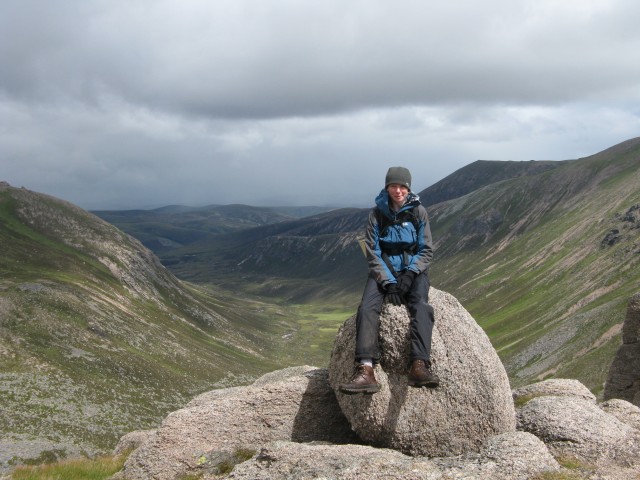 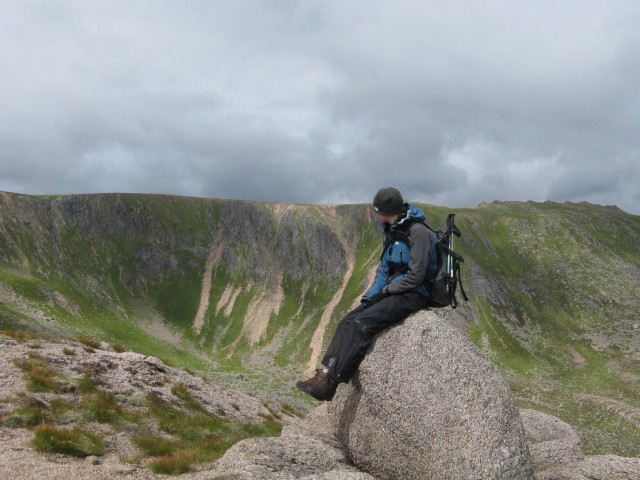 we headed up to the summit of Ben Avon. 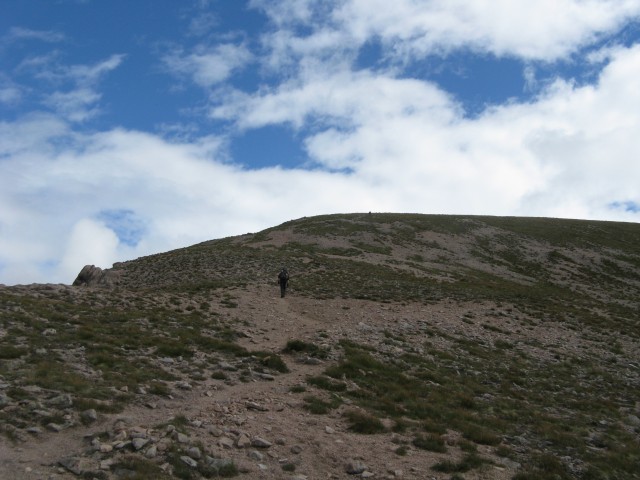 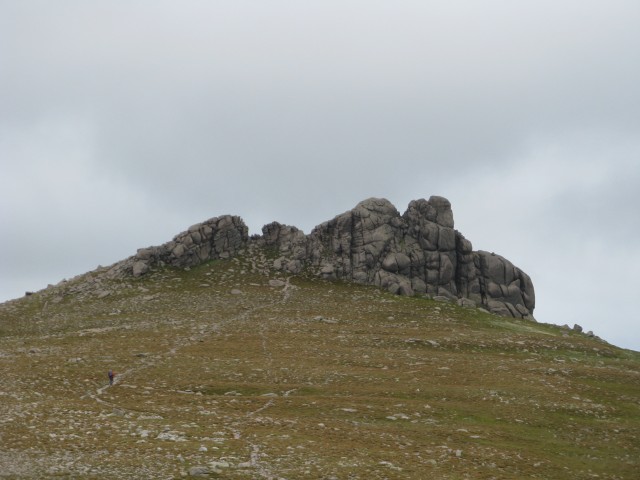 Katie scrambled up to the top of the rocky tor: I had done it before so just recorded the event for posterity. We then returned to the spot height of 1138 before turning south along the ridge to Carn Eas. This broad ridge gives excellent views of the huge corries of Beinn a’Bhuird. 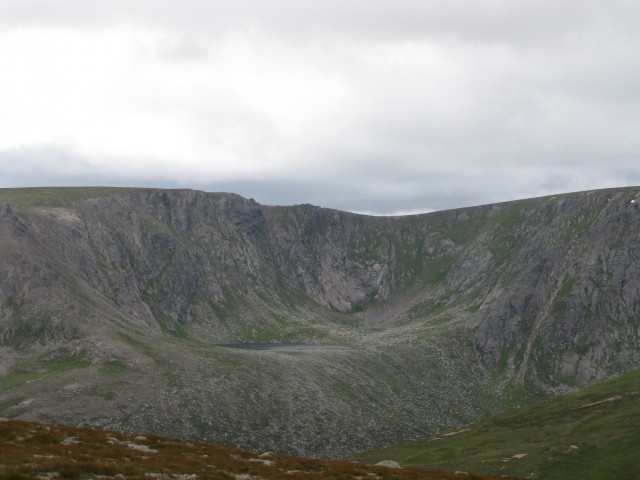 From Carn Eas we dropped steeply down to the track in the glen and then began the long walk out. We past a pile of bikes high up the glen: it appears that people were leaving bikes there and bagging both Munros from the bealach before cycling out again. Surely if you do this you miss out on the best features of these hills: their huge bulk, the corries and cliffs of Beinn a’Bhuird, striding out across the plateau, the river crossing. Each to their own I suppose.

Fine report and pics there bootsnpaddles,never been up the "Gorms" yet but can"t wait to start,any tops you could recommend for a gammy leg,they all look a long walk in

I loved that walk but Richard hated it... not enough excitement and too many miles for him. I loved the wilderness feeling of it all though and especially loved Ben Avon with all it's lovely tors.

We cycled as far as the end of the woods after Alltdourie and then left our bikes in the forest chained either side of a tree. That way it didn't spoil the walk and we could do more or less the same route as you've described...

Most of the walks in (walk-ins?) are a lot shorter than this. I think the best thing to do is to take a tent and have a base at for example Derry Lodge or near Corrour Bothy so that you can take your time and do lots of hills.

Try Sgor Gaoith from Glen Feshie. Either the WH route, or you can do it from Auchlean and ascend over Carn Ban Mor. Great views out over Cairn Toul and Braeriach.