Beinn a' Chleibh from Succoth

Beinn a' Chleibh from Succoth

Munros included on this walk: Beinn a' Chlèibh

Beinn a'Chleibh from Succoth.gpx Open full screen  NB: Walkhighlands is not responsible for the accuracy of gpx files in users posts

Driving home over the Rest and be Thankful after a wedding in Edinburgh on the Sunday night, I remarked to my wife (with slight bitterness) "It would have been a great day to be in the hills". She suggested that if the forecast continued to be good. that I take the opportunity, to get out, which would also give her the chance to catch up on chores around the house, without me 'getting in the way'.

On checking the MWIS forecast for the West Highlands that evening, the description for the next day was windy and cold, but dry, with a 100% chance of cloud free Munros!

With the clocks having just gone back this seemed like a chance to implement a route I had been chewing over for a few months. Beinn a' Chleibh and Ben Lui are the only notable omissions from my tick list, for the Tyndrum and Crianlarich hills. Although usually climbed together, I had planned to climb Lui with friends from Fife, on a 2 car trip starting in Connoish and finishing in Glen Lochy, giving a more interesting cross section of the mountain. However, it seemed rude to make them do Beinn a' Chleibh again, just for my benefit, so I had decided that I would bag it alone.

I had no real interest in climbing it from Glen Lochy and for some time had been mulling over climbing it from Succoth, just past Dalmally. A quick scan of older route descriptions, suggested it had at one time been possible, utilising the old drovers road to come round the SW side of the mountain. Aware that there is a great deal of forestry/hydroelectric work going on in that area I had put out a post on the Walkhighland forums some months ago, to check that the route was still passable. The ever helpful Walkhighland community was quick to assist, suggesting it was still an option, and quite possibly a more pleasant walk, than the Glen Lochy ascent.

That in mind, a route plan was made, based on the most up to date maps and satellite image, figuring that if I could negotiate the maze of forestry to the drove road, everything else would be a piece of cake. I was also keen to use my bike for the inital part of the route, which at the end of a walk usually means a quick freewheel back to the car, rather than slowly re-tracing steps. Brief consideration was given to including the Graham, Meall nan Gabhar, but given the proximity over the starting point to home, the decision was made to keep that for another trip in the shorter days of winter.

The next morning I arrived at the turn off to Succoth, just past the hamlet of Corryghoil. Parking in front of the Forestry commission sign, I reassembled the bike and set off. 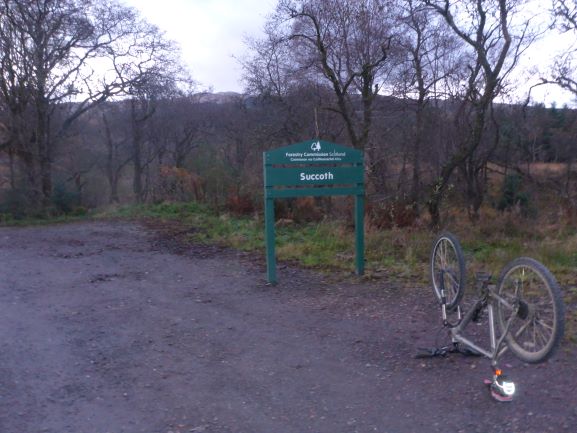 As I cycled up the well surfaced and evidently well used track, there was a ribbon of dark cloud, moving with the northerly wind over the top of Beinn a 'Chleibh. Making steady progress up the track, some warmth soon returned back into my legs. After a few km, on reaching a railway bridge, it came upon me that I had made my first mistake of the day, as Succoth lodge, where I had planned on passing through, on the other side of the gully. Recalling that there was a good quality bridge further back, a quick scoot back down the hill and got me on the correct side of the burn. 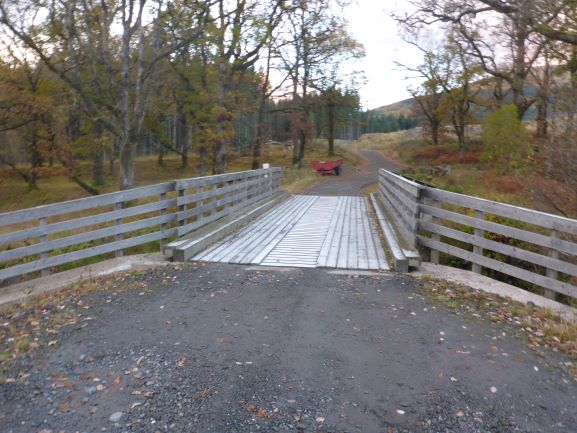 Ascending a pleasant woody path towards the lodge, it soon became necessary to get off and push the bike (not an uncommon state of affairs). 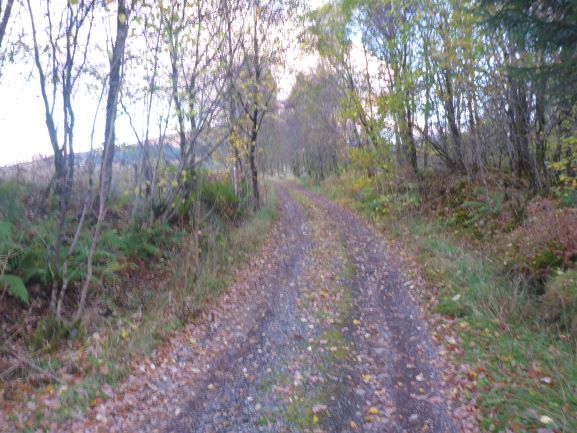 Nearing the houses, I passed through a large metal gate, trying to make as little noise a possible, conscious that I was passing through someone's front garden at an early hour. After passing some cottages and a byre, I came to a second metal gate. where the hard surface road ended and became a grassy forestry path. There was the usual 'no entry forestry operation sign', but since as usual there was no evidence of any operations this was ignored.

Since the path was not suited to even the mountain bike, it was dumped behind a fallen tree, carefully marking the point on my gps for my return. The path continued along through a mixture of native and coniferous wood land, with the ground, slightly firmed from the frost making pleasant walking. No real issues were presented other than circumnavigating some fallen trees that had crossed the main path.

On exiting the forest, to join the line of electricity pylons and what presumably had been the drover's road, the track became surfaced road again. After stopping to have a quick blether with workmen, re-enforcing the pylon bases I continued until again the road metal ended and, the still well marked path, became grass and mud again. 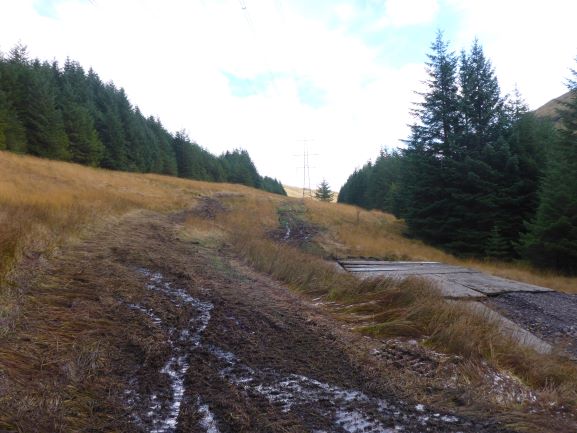 I always enjoy drove roads, I imagine what they must have been like years ago, perhaps slightly fancifully, with 'Game of Thrones' type characters travelling along them!

After passing through a large metal gate in line with the fence at the edge of the forestry plantation, I strode up out the hill making my ascent of Beinn a' Chleibh. There was no real path, but going was easy with the frost keeping the boggier parts at bay. The wind was pretty strong by this point, with a real northerly chill and I was glad of my decision to have put on my winter base layers. The wind coming down the slope at me, meant I was able to get close to a good sized head of deer, before I was observed and the 'scatter' alarm was sounded. 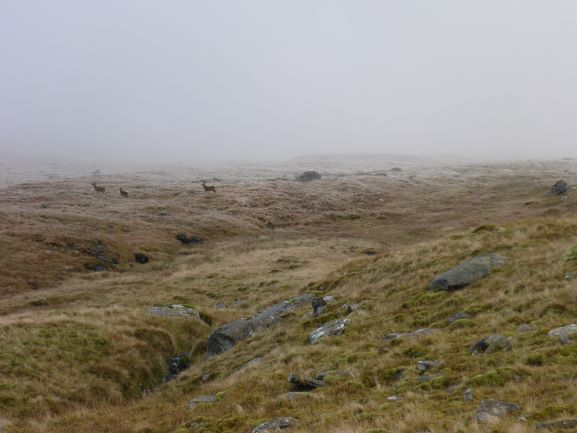 Ascending above the clouds, it seemed like the forecast of clear skies had been a bit fanciful and my plan of getting a dramatic autumn view of Ben Lui was looking increasingly unlikely! Indeed on reaching the summit cairn, this was my view in the direction of Ben Lui. 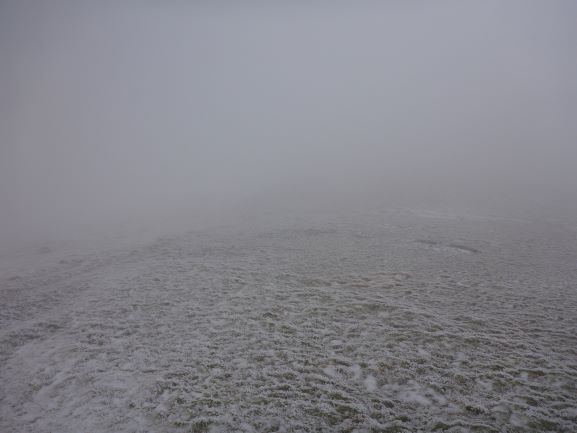 After a cup of coffee and a sandwich, while waiting to see if the cloud would clear, I decided that it was time to get moving and warm up again. I started to meander back down muttering curses about weather forecasters and 'the horse they road in on'.

Consoling myself in enjoying the walk, I was shortly rewarded by some good views over Meall Nan Gabhar, Loch Awe and Cruachan. 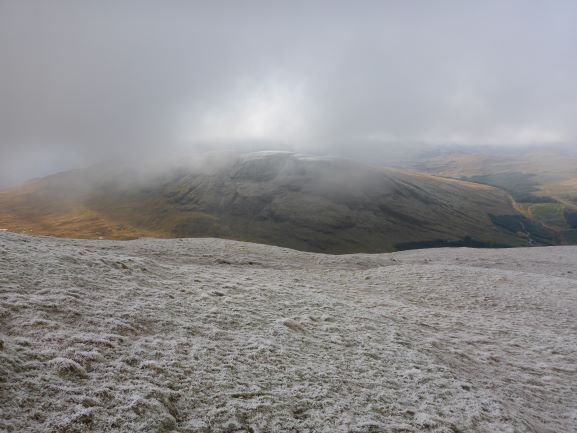 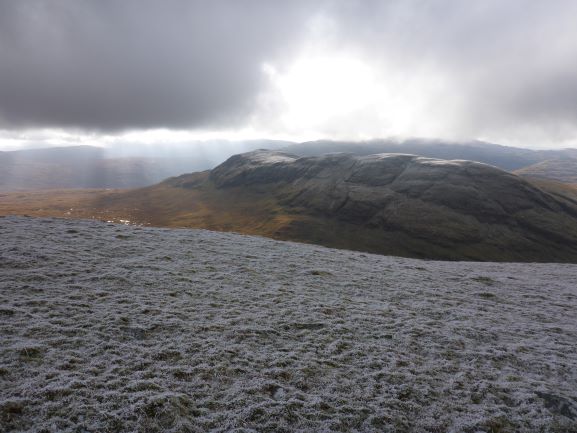 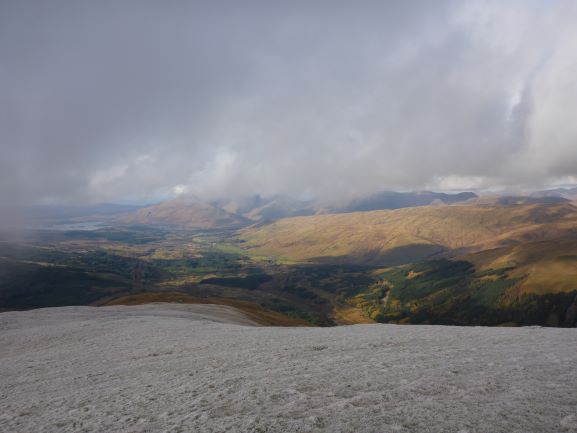 I descended via a similar route and was able to watch a hill shepherd on Meall nan Gabhar, gathering sheep on what looked like a 45 degree slope. 2 sets of hardy species!

My steps were retraced along the drove road, then past the workmen, where I was kindly offered a bovril from their tea shack, before heading back through the woods to my bikes hiding place just after Succoth lodge. From here on it was an easy freewheel back to the car.

With hindsight, I could probably have utilized the bike further if I had stayed on the forestry track which followed the opposite side the burn from the lodge, the workmen on the pylons had vans, so it must still be possible to reach the same point by vehicle track. However the route through woods was enjoyable, so that option can be explored when I return to do Meall nan Gabhar. 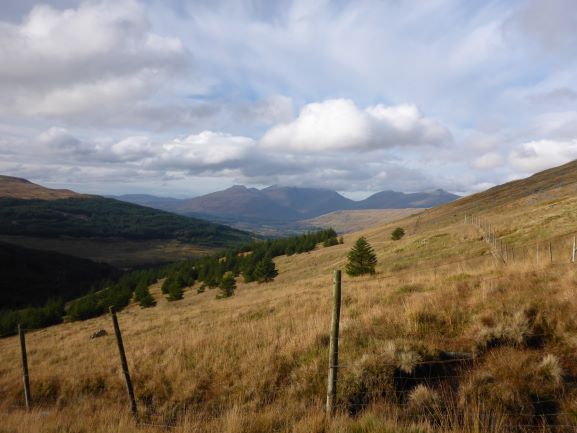