This is an account of the trekking stages of a 24 day trip to South Africa undertaken in November 2018.

Flew into Johannesburg and then drove over 400km latterly through a dramatic thunderstorm to the Cathedral Peak Hotel, Kwazulu Natal. This amazing hotel is in a stunning location surrounded by the northern Drakensberg and boasts a golf course, swimming pool, fishing, quad biking, riding, running trails and of course hiking.

Day 1 - Baboon Rock
Gentle introduction (or so we thought) return hike of 8km and 600m elevation to a prominent rock outcrop visible from the hotel. Trek starts over suspension bridge from which large trout visible in river and then avoiding baboons on the golf course.

Some minor scrambling involved. The Guide pushed the pace for the first 2km or so and in the heat (30degs) we began to suffer and requested he come down a gear or two. Great views of the area, amphitheatre escarpment and hotel disposition. These fish are BIG! 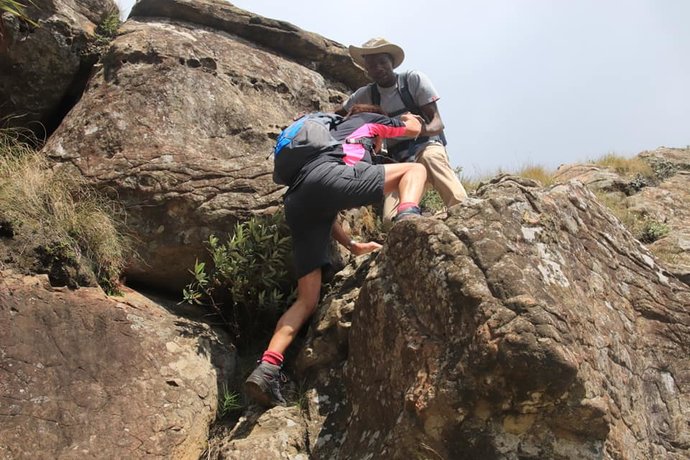 Day 2 - Ribbon Falls and High Berg
Trek without Guide through hotel grounds and stables and up long valley on dusty steep trails for over 3km to steep rock outcrops with ladders and scrambling. This led rather spectacularly to a hanging valley and a scramble onto a broad ridge that swung round towards the curving overhanging rock wall and series of falls. Except there were no falls. We struck up some short zig-zags on an adjacent shoulder leading to the high veldt and met a Black African descending the trail. He had a walking staff and was wearing a beanie, strange thick coat and wellie boots! His English was poor but it became clear he was an illegal immigrant from Lesotho which was only a few km to the south but about 1000m higher over the impressive surrounding escarpment. He was now in SA and hoped to avoid being caught. We continued onto the high berg meadow and a pleasant undulating walk back round and down towards the hotel via Mushroom Rock. Day 3 - Cathedral Peak
This was the piece de resistance of the week. Cathedral Peak dominated the views from the hotel and drew the eye from many points around. At 3005m it presented a shapely steep peak and the last 250m or so were into rock climbing territory, The main challenges were the distance and pace of the march necessitating a 6am start! As the crow flies it was probably about 8km from the hotel but the route on the ground was closer to 12km. Whilst it stands alone it is surrounded by the varied towering peaks of the main Drakensberg escarpment. We had been joined by a party from a nearby resort making 11 in total including 3 guides. From the outset the pace was relentless - boulder hopping up a wide river, good but tortuous trails over steep rising terrain to gain the top of the initial broad ridge - Swine HIll. Initially the trail winds through the lower berg, follows the Mhlambonja River for a while past Sherman's Cave before heading up formidable Swine Hill with breathtaking views before ascending to Orange Peel Gap which at about 2300m is about halfway – regarded as the gateway to the peak. From Orange Peel, the path contours gently along the back of some subsidiary tops for about 40 minutes until we very rudely bump into the foot of Bugger Gully. 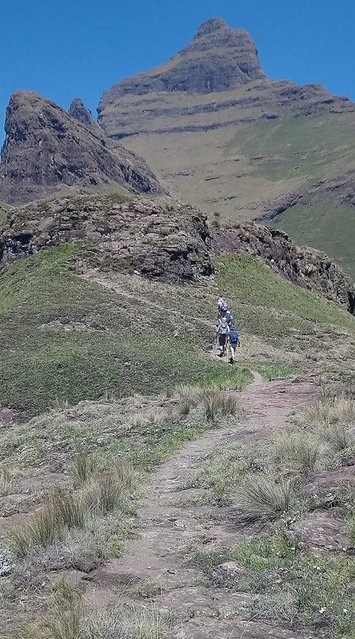 Steep and bouldery, this gully climbs strenuously for 30 gruelling minutes until we reach the path that branches off to the right, and leads to the scramble pitches on the side of the summit cone. Despite the azure blue sky and blazing heat, as we approach the steep broken rock face it becomes clear that a lot of water is seeping from the bands of vegetation above onto the rock pitches. After a few minutes cogitation the guides decide that it's too dangerous to continue and so full of disappointment and after a short lunch we trudge the long way back to the hotel. As we descended the contour ridge path back towards Orange Peel Gap with 11 of us strung out like a snake the sightseeing helicopter from the hotel buzzed us flying level with us only a few metres away! A selection of pics from three separate Safari trips to the Klaserie Reserve (Africa on Foot), Raptors Reserve (Hoedspruit) and Kruger (Sveni Trail). These were a mixture of game viewing trucks and on foot. The game walks started at 5am and covered 10 - 12km returning about 9am. We had several night game drives including a hair raising "rally" through the bush to reach a stranded vehicle. I had been up Table Mountain before roughly 10 years ago by the Cableway so on this trip we wanted to climb up at least one way. While preparing in the UK I had homed in on the Platteklip Gorge route which presented a steep straightforward route up the north face. But while at Cathedral Peak and Kruger I was advised by other tourists that this gorge offers no shade and you bake in the sun all the way. Far better to climb Skeleton Gorge from Kirstenbosch to the SE which gives a more varied scrambling and shady approach. There is also the bonus of experiencing the Boomslang treetop canopy walk at Kirstenbosch. And so it was for only 140 ZAR we found ourselves pulling up the steep well-made trail and ladders etc that constitutes Skeleton Gorge. Eventually at the top of the gully you arrive at the huge Breakfast Boulder from which a number of paths radiate in various directions, several leading to the summit plateau. After following this path over ridges, into minor gullies and over rock steps we finally arrived in an hour and a half via the top of Platteklip Gorge onto the very busy summit area. As we gained height dramatic views opened up to the south and southwest of the mountain chains around Houts Bay and Camps Bay. The views of the Cape Town bowl, Lions Kop, Devils Peak, surround and seascape were amazing. We breathed in these awesome views from several of the viewing platforms before heading to the cafe for much needed food & drink. Sorry to say we cheated and took the Cableway down and taxi back to Kirstenbosch. What a fabulous trip! Though I have no intention of ever visiting South Africa, it's just not for me, it's good to see something different though, great pictures.