Track-16-Dec-2018-09-36-09.gpx Open full screen  NB: Walkhighlands is not responsible for the accuracy of gpx files in users posts

My first ascent of Beinn a'Bheithir, and my first walk report. Having recently purchased Garry Smith’s book: Scotland’s Winter Mountains with One Axe, I have set myself the goal of completing all 30 of them this season. I’ve booked my Winter Mountain Leader Assessment in March next year, preparing for which has been as fine excuse as any to head for the snowy hills.

This was an early season winter journey with some grade 1 winter scrambling, two munros, a summit sunrise and some serious night navigation. A fantastic route over two ridges, with a mixture of blocky, exposed scrambling, snowy aretes, big mountain views and a sunset finale.

After a wild drive in an absolute hooley from Glasgow, I was parked, suited and booted and finally on Shank's pony by 09:30am. The approach to Sgorr Dhearg from Ballachulish was tough going, the ascent path being more of a torrent of snow melt for the most part, although gradually intermediated by frozen mud, slush and, by about 600m, snow. An hour or so of localised hail storm accompanied my ascent, occasionally making me question the sanity of my endeavour. Trudging uphill I was thoughtful of all those sensible souls who chose to spend their Sunday morning in bed like sensible folk! Nevertheless, MWIS, MetOffice and SAIS all promised improving conditions by noon so I ploughed on faithfully. 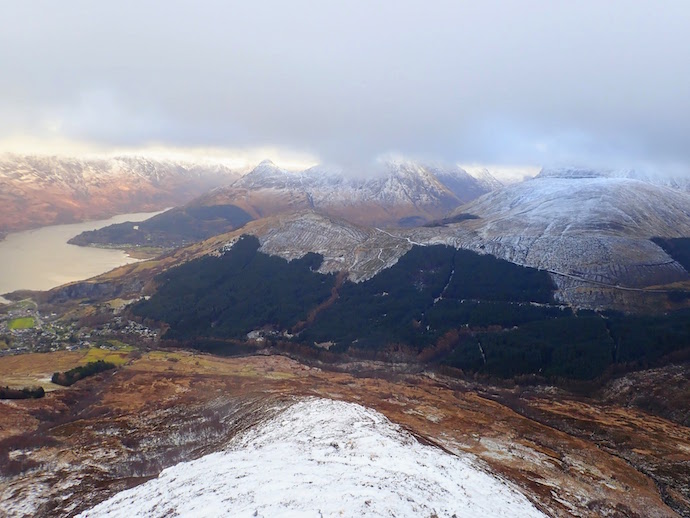 Fantastic views back across Glencoe just after the hail storm had cleared. A welcome sight on the rough approach slopes to Sgorr Bhan.

By 600m it was time for crampons, thankfully leaving the torrent of slushy, ice-mud and torrents of snow melt to lower altitudes. Crampons out and ice axe in hand it was time to tackle some of the fantastic grade 1 scrambling of Sgorr Bhan’s NE ridge. Exposed blocks and steps proved exhilarating, with good hand, feet and axe holds on forgiving angles. Many difficulties could be easily circumnavigated should you feel inclined to avoid the exposure. 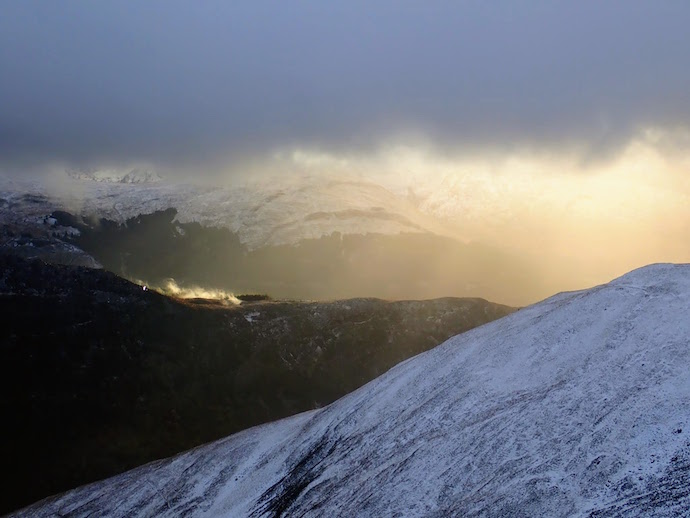 Sunlight hitting the mist to make it look like smoke - quite magnificent. 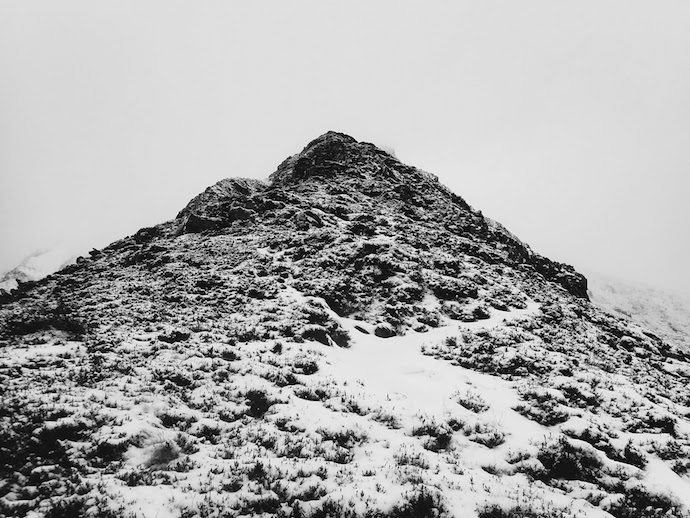 Sgorr Bhan looking resplendent in black and white. Snow was starting to accumulate as the ridge narrowed onto a crest - nearly time for crampons.

The beautiful snowy arete leading from Sgorr Bhan to Sgorr Dhearg was quite special. It was easy going - following a splendid, gracefully curving ridge leading up to the summit. Although I’m sure spectacular in fine weather, following the ridge up into the clouds gave a mystical air to the walk. 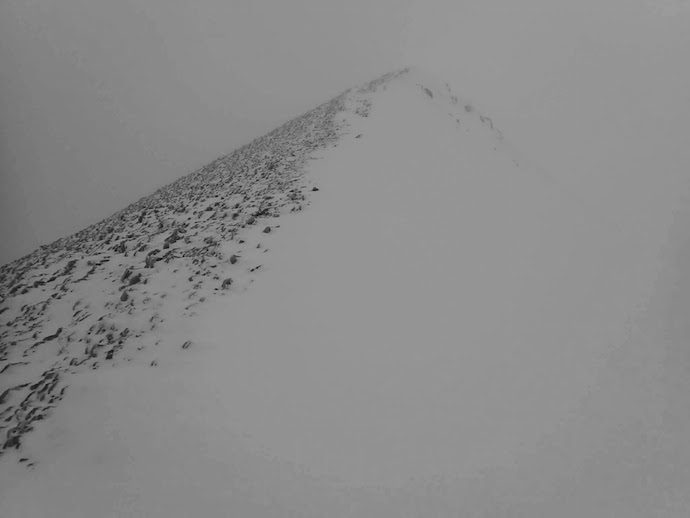 Reaching Sgorr Dhearg’s summit cairn at 1024m I decided to continue to the second munro gambling on the improving conditions revealing something other than thick cloud and iced up rock formations, which certainly carry their own beauty in a windswept, desolate kind of way. 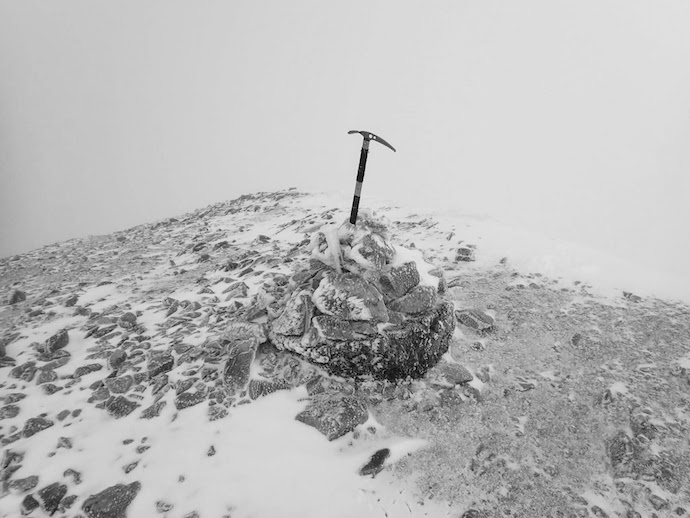 Summit of Sgorr Dhearg in black of white after some exposed scrambling on blocky steps and a beautiful snowy ridgeline to get there. Not a soul in sight.

Descending from the summit, the weather gods had looked favourably on my previous sufferings on so many clag covered munros and had decided that today, Scotland's winter mountains should be revealed in all their snow covered glory. Far be it from me to probe their intentions, at least they give us something to talk about. 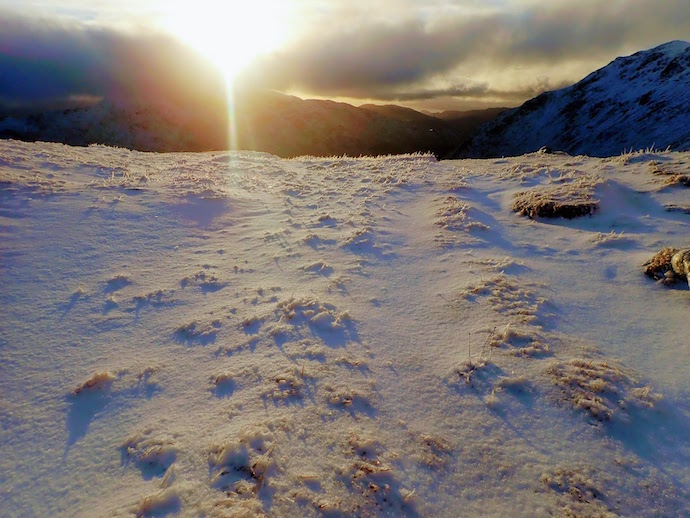 Descending from the mist surrounding Sgorr Dhearg, towards the bealach, the clouds parted and set fire to the snow crystals. 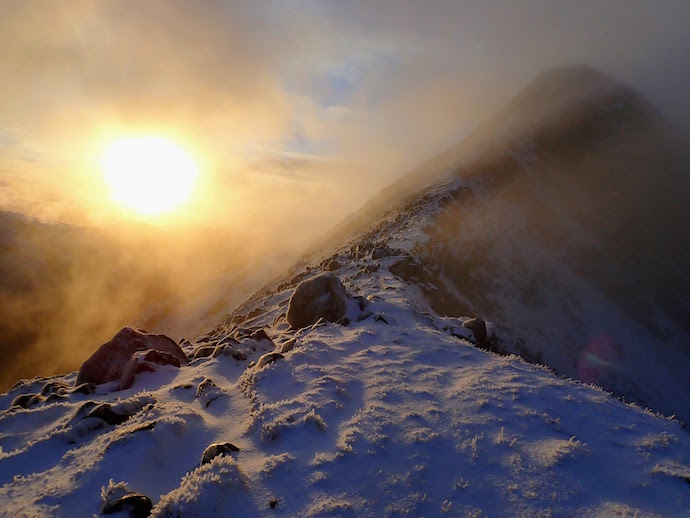 Evening sun approaching Sgorr Dhonuill, and the rewards of perseverance. I knew I'd be descending in darkness but the views were just too good to relinquish. 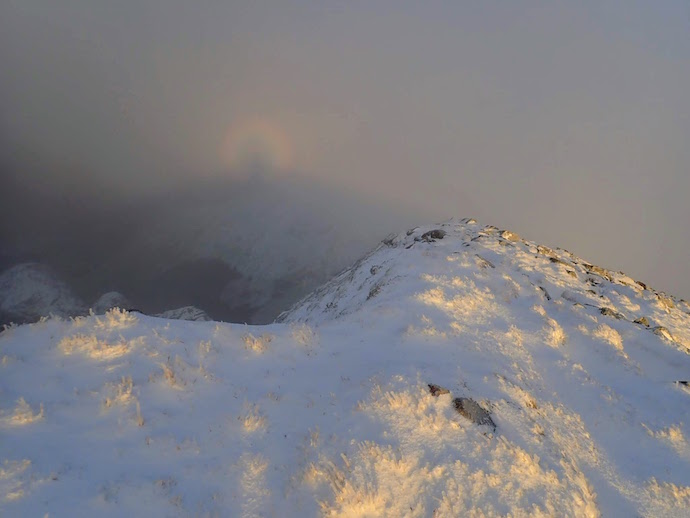 Broken/Mountain Spectre. Nothing quite like it, like having a personal rainbow in the clouds - only lasted for a minute and then vanished.

From the bealach it was a short pull up to Sgorr Dhonuill, with some fun scrambling with magnificent exposure on stable ground looking down onto the coires below and out to the mountains and sea beyond. There was quite the reward upon reaching the summit at 1001m. 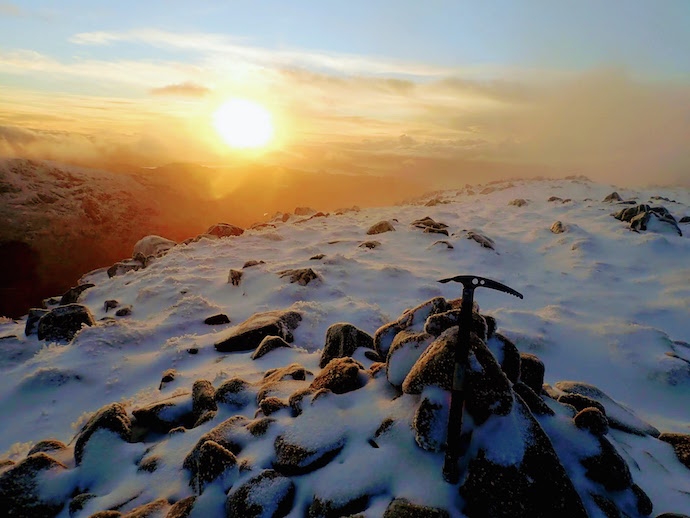 Topping out to sunrise on Sgorr Dhonuill after brilliant winter scrambling just before the summit.

I had half an hour of complete renewal on the summit, simply wallowing in mountain splendour at sundown, not a soul in sight. After some industrious munching of cake, chomping on chocolate and guzzling of hot tea I felt reasonably well fortified to tackle the descent back down. I’ve often found being in the mountains at night is never quite as bad as I imagine, especially if my navigation is good, I don’t get lost and I’ve got spare batteries for my headtorch. Night navigation is always more pleasant with some food in the stomach. 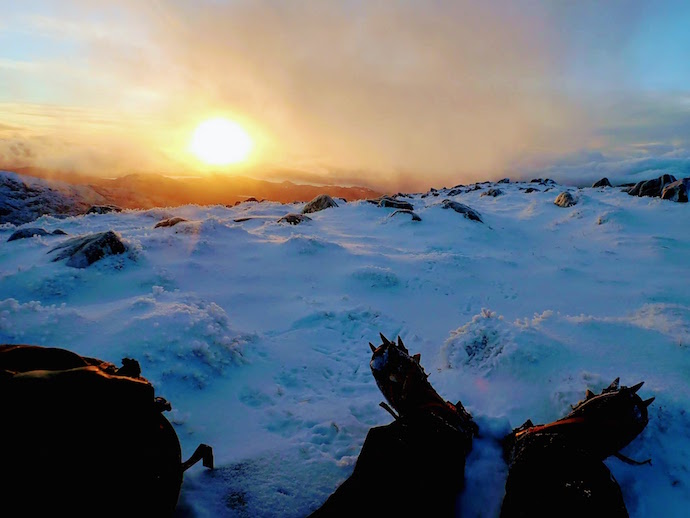 The wind died down just in time. 3:30pm, time to don the duvet jacket and sit down for tea and cake! (well, a flask of tea and some buttered malt loaf but it did the trick :) A meditative moment before night navigation and head torch time!

The wind had died down and the whole thing turned out to be quite a reasonable affair, retracing my steps back to Sgorr Bhan and then down along it’s NNW ridge. I headed E down just before Beinn Bhan, to catch the Alt a' Choire Riabhaich and follow it back down. The descent back to the approach path was a bit of a wrestling/sliding match through rough, wet ground and thick heather. Gravity was on my side at least and I was back with the wheels in Ballachulish by 08:30pm, feeling immensely satisfied. Re: Beinn a'Bheithir: Winter Scrambling and a Magical Sunset