After a fine sleep, interrupted only very briefly and temporarily by Kev's futile fumbling with the fire around 4am, we had breakfast, packed, cleaned the fire out (well Kev did anyway, while I took the spade and went to deal with the problem now being caused by last night's Chew Chew!

) and generally spruced the joint up a bit before moving out.

Today's business involved walking out to the cars over the two Grahams, with considerably lighter packs. We were essentially carrying only sleeping gear and cooking gear (plus quite a few crushed cans of Chew Chew, Wanganui and Mind the Gap, all courtesy of the wonderful Fallen Brewery). Meall a'Phubuill from the climb up the track - Ground Hog Day but only with packs this time! Bheinn Bhan down Glen Loy from the ascent of Meall Onfhaidh 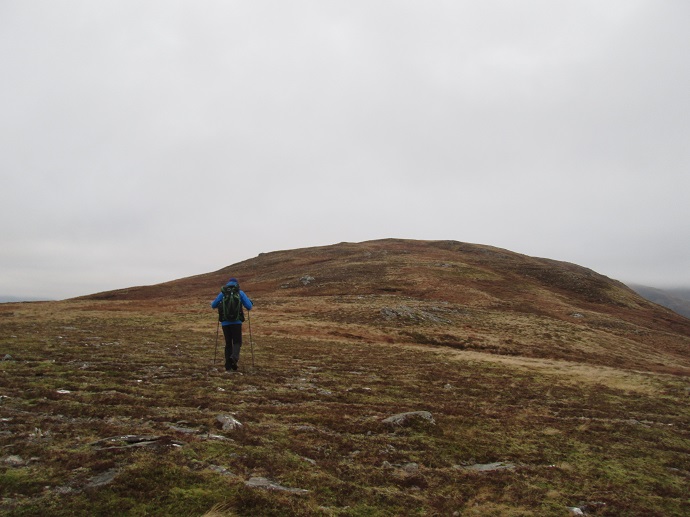 Once again, I was feeling the effects of the ascent and struggling to feel like the old me again in the hills, just as I had done yesterday. Where had my former glory gone I wondered? I guess over time, fewer trips and less hill time per year have just blunted the hill sharpness I once had. And of course, like everybody else, I'm not getting any younger. Maybe I just have to accept that I'm cracking on a bit. I guess a fairly hectic festive period involving quite a few parties and during which time I had survived primarily on ale and party food might also have had something to do with it, and as Kev helpfully pointed out, quite a few Taliskers and Chew Chews were taken on board last night in the bothy.

And since we lost Lucy almost a year ago now, I have not been getting my regular walks in the morning and/or evening. Even in her latter years, when she was generally getting only one short plod around the block of an evening as opposed to the two lengthy daily walks she used to get up Kinnoull Hill, she was still a reason for me to get out every day and walk. That hasn't been happening for the last year and maybe it's only now that I realise the benefit I was getting from it. As I puffed my way up onto our second and final Graham of the trip, the views began to open up into Choire Reidh and beyond to the high bealach between Gulvain and Braigh nan Uamhachan where almost exactly 6 months ago I had managed to become completely befuddled in the clag and failed to successfully navigate my way onto the Corbett. It had been another fairly uneventful but thoroughly pleasant walk over the two Grahams and now we set course back to Fassfern. The landscape looked more reminiscent of a late October day than the first few days of January but on the exposed tops and broad ridges, it was certainly cold enough to feel like the depths of winter, even if there was not as much as a fleck of snow to be seen. A few semi-frozen puddles was about all that winter had to offer on the ground.

From our second Graham, we headed south east along the broad, flat, lochan studded ridge of Drium Beag to descend to a gate at the edge of the forestry that would, via a rather overgrown and abandoned old landrover track, lead us back down onto the motorways of the modern day forestry tracks, clearly well used by diggers and the likes in forestry and felling operations. Gateway to the track of doom

We were back at the cars on the dot of 1 o'clock and almost as soon as it had started, another annual winter bothy meet was consigned to the annals of folklore.

Yer too hard on yourself. Once you get your Springer spaniel, you’ll be back to your old self. 🥴