The weather was too good today to not go for a walk, but just recovering from a problem with the tendon in my foot I had to choose carefully. Earlier this week I was in Kirriemuir and Cat Law was mentioned at the viewpoint on Kirrie Hill so I decided to look it up. It certainly sounded like a good option for a sunny Sunday!

It was an exploration of some of the back roads of Angus to reach the starting point of the walk at the old gate to Ballintore Castle.The walk started by following the road to the other side of the patch of woodland where a gate opened into a grassy field. The track is indistinct here with lots of different tracks spreading out from the gate, but it is just a case of heading towards the far corner of the woodland where there is a gate and then across to another gate which opens onto a well-defined track. This well-defined track pretty much leads all the way to the summit of Cat Law. Not a complicated route and with the hill facing the sun for the most part there was very little ice. A tiny patch of snow on the way up provided some entertainment for Moss. The views are impressive looking across to Mount Blair and the Munro's of Glen Shee and further away I'm pretty sure Schiehallion was the prominent pyramid in the distance. Behind us Loch of Lintrathen was clear to see and Loch of Kinnordy a bit further away, the views stretching right across to the Angus coast. About an hour after we started we reached the summit where there is a wind shelter and a trig point. 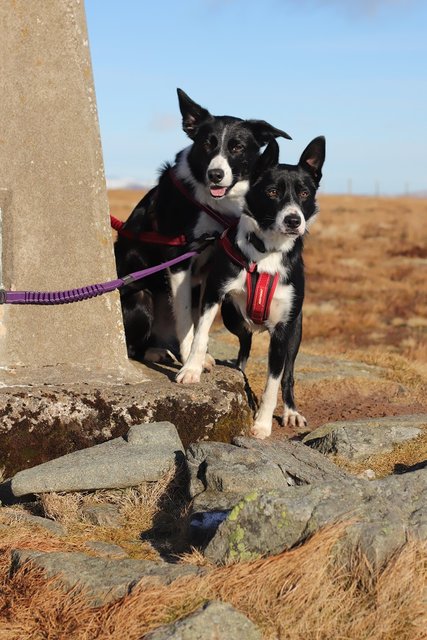 Moss found a fence post at the summit which entertained her for a while before we started to head back down the way we came, fortunately she quickly gave up on the idea of bringing the fenced post down with us Returning to the gateway, we decided to extend the walk a bit by following the track that went around the back of the castle. There are building materials at the castle that suggest work is being done on the building so hopefully some day it will be in use again. The track led us back onto the road and the walk back to the gates gave some great views of the castle. A nice little addition to the walk.