A'Chralaig and Mullach Fraoch-Choire, came up next on the list, probably cause weather looked OK up that way. I remember nearly getting some decent ship shots on the way up. Spotted her just off Corran, but couldn't get clear view of her.

Nearly great, but not quite. Also, remember start as being pretty arduous, rising steeply up the south ridge of A'Chralaig, struggling the keeep up with Jaf. It was a glorious morning, with a bit of an inversion going on over Glen Shiel and Loch Cluainie. T-shirt walking weather. The inversion begins to clear as we rise up towards the ridge. The going eases a bit, as Big Jasper, makes for A'Chralaig. Over to the Cluanie Inn and SGR. Big Jasper, in his element. Cracking day for walking.

Good views of neighbouring hills and still some nice cornicing of snow, as we neared the summit, which unfortunately bcame shrouded in a bit of fog. Sure is a fine big cairn there, which we kept company for a while, to see if it would clear, but no. No point waiting too long, so after some grub we set off for Stob Coire na Craileag. It wasn't too long till things began to clear behind and ahead of us, revealing the fine ridge back to the Basket and ahead to the pinnacles, Na Geurdain. Heading off the top. We left our rucksacks at the top of Coire Odhair and moved on to decide what to do with the rocky stuff. I scrambled over them, a bit gingerly admittedly, but was good fun. Made it to the summit not far beyond that and enjoyed the fine views. Scrambled over a different outcrop on the way down, which was a bit trickier for me, but probably a dawdle to anyone else.
Pretty uneventful trip back out, most notable in that it was a bit of a damp, long trudge. Nice view back to A'Chralaig. 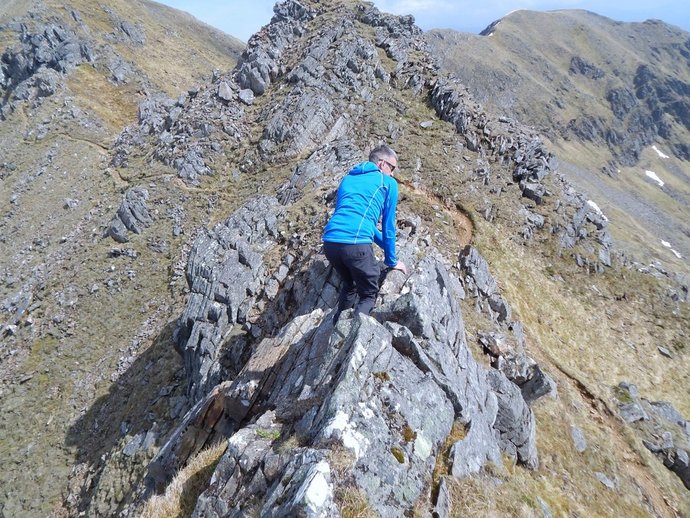 The gazelle tries some scrambling, The road to the Isles and the car. 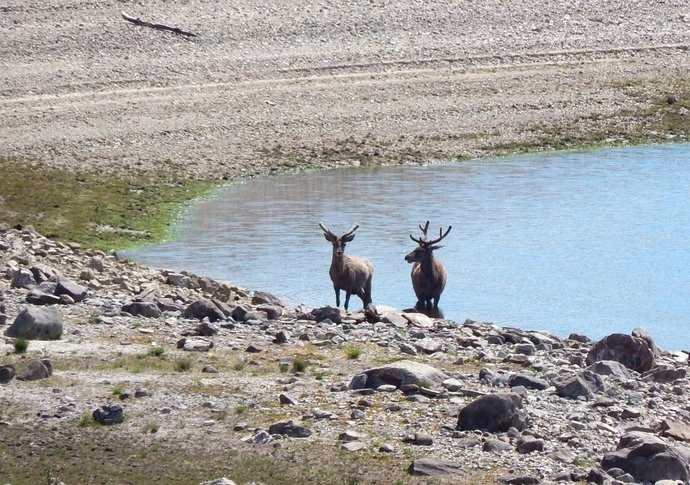 Another excellent trip to the hills and to cap it all, managed another photo of "my," cruise-liner, The Soubourne Quest, now in Fort William, on the way home And pano, from summit, more to NW? Hills of the SGR as we descend. A bridge which must have been consumed by the dam.