After a stunning few days in the North West Highlands in February 2018 I had high hopes for this winter. While conditions in January werenâ€™t promising, the snow was improving by the start of the second week of February. Anyone on the hills of Torridon on the 7th of February would have enjoyed glorious conditions. As late as the 11th, things were still looking good. Sadly, by the time I and fellow members of the London Mountaineering Club arrived in Torridon on the 16th, the heatwave had been in full force for a few days and literally all of the snow had gone. In terms of winter climbing absolutely nothing was in condition. Iâ€™d hoped to tick off Morrisonâ€™s Gully and Deep South Gully this week and, in the process, bag all the munros on Alligin and Eighe. â€™Twas not to be.

Day 1 (Sunday) three of us made our way up Tom na Gruagaich on Beinn Alligin. Conditions were atrocious. Gale force winds and rain on the ascent. Zero visibility at the summit. We quickly decided to retrace our steps. Pressing onto the second munro and the horns in these conditions would have been foolish.

Day 2 (Monday) I had to rise early to drop John back at Acnasheen. Seeing the forecast for the week ahead he had decided to head back to London and was on the early train to Inverness. Later in the morning I met up with a few of the others for a walk round to Coire Mhic Fhearchair. Conditions were similar to day 1. Warm, wet and windy. The coire itself was stunning, even in the grim conditions and I look forward to returning in better weather. On the walk back out from the coire to the car conditions improved slightly and I managed to snap my first photo of the trip. 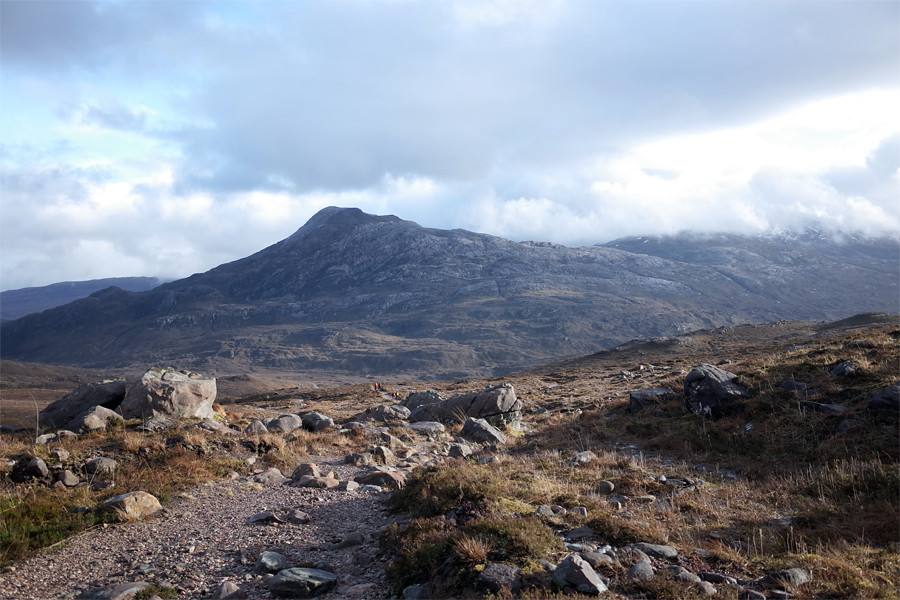 Walk out from Coire Mhic Fhearchair

Day 3 (Tuesday) The first day shooting up Being Alligin had taken its toll on my quads, this being my first time in the hills proper since September so I plumped for an easy day and walked on my own around the marked mountain trail on the eastern flank of Being Eighe above Loch Maree. I considered continuing up to Meall aâ€™ Ghiuthais but all the tops were shrouded in cloud so I just returned to the car through the trees. Nice views above the Allt na Airighe. 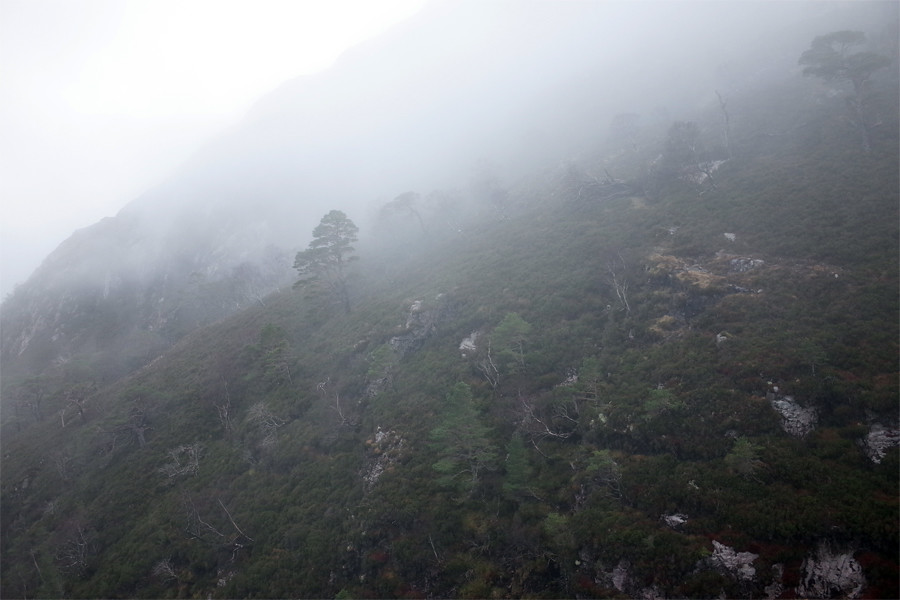 Misty mountain hop - on the flanks of Being Eighe

Day 4 (Wednesday) Rest day. Abysmal weather (worst so far) and not a day to be on the hill. Drove up the bealach na ba and nearly got blown off the top then back down to Lochcarron for some lunch.

Day 5 (Thursday) Several members of the group opted for the Liatchach traverse. Having done it last year in alpine conditions I didnâ€™t fancy repeating it and instead went up Slioch with Jakub who had also done Liathach before. On the way up above the loch we saw loads of frogs. Incredible signs of spring in February. As we neared the summit there was no visibility and we could only imagine what views would be like on a clearer day. Munro number 60 for me. A small milestone. 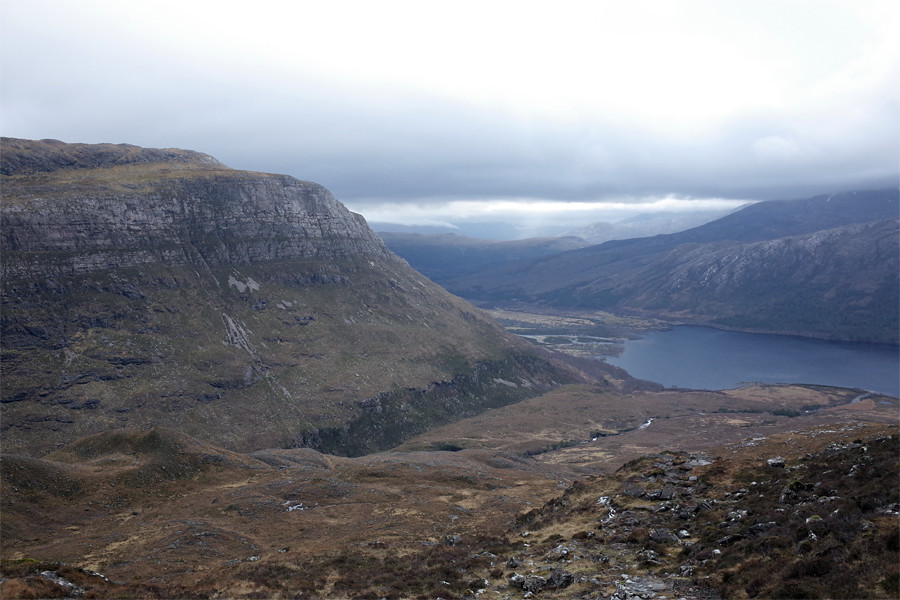 Day 6 (Friday) Today Sadie and I drove to Diabaig to do the grade 3 scramble above the beach. The tide was in when we arrived so we had to climb the descent path a little way up then traverse down onto the route. We started about 25m above the shore so we missed the first slabby pitches. I led off and it was good to be at the front of the rope again, something Iâ€™m trying to do more and more these days. Further up Iâ€™m pretty sure we went off route a little as there was a lot of heather bashing and a bit less time on rock. Near the top though we found our way back onto the crest of the rib. Views on the ascent were stunning. Probably the best day of the whole week. 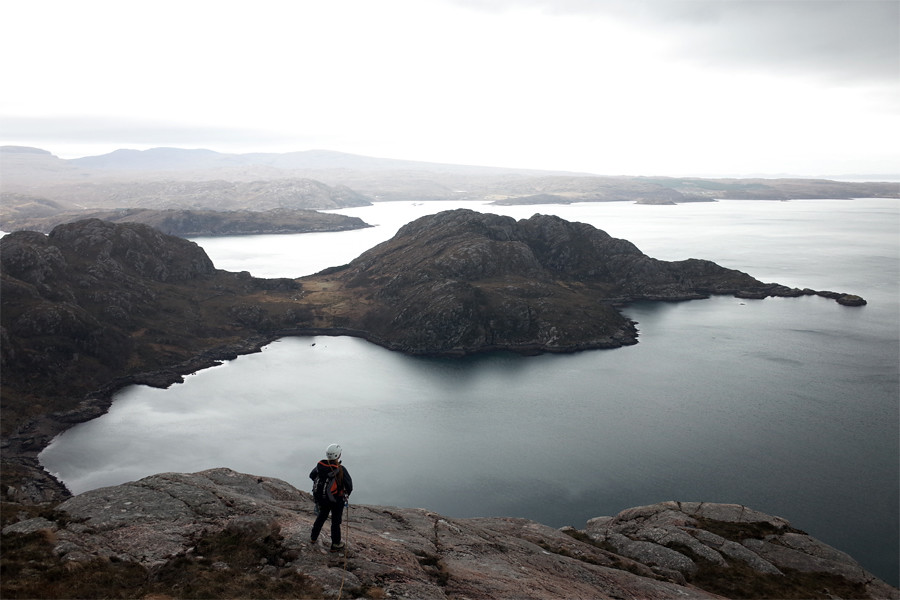 Day 6 (Saturday) Long slog back to London with delayed Easyjet flights. Made it to a mateâ€™s 40th birthday bash in East London by about 10pm then turned in, knackered at 3am. Next day (Sunday) back home to Brussels on the Eurostar but not before finding a tick sunk into my left calf after stepping out of the shower. Little bugger probably attached himself on the walk off the crag at Diabaig on Friday. The only day I was out without gaiters on. I lifted him out successfully with tweezers. Not the kind of tick this munro bagger was hoping for in February!

All in all it was a disappointment to travel so far from Brussels, incur not inconsiderable expense (Eurostar, flights, car and accommodation for the week ran to the best part of a grand!) and get absolutely no use of my axe or crampons. But thatâ€™s life I guess. Last year I was very lucky with the conditions and this year, although not able to climb what I wanted, I still enjoyed great company of fellow LMC members throughout the week, good craic at the pub in the evenings, ticked off my 60th munro and had an enjoyable day scrambling.

Iâ€™m looking forward to the Alps this summer and hopefully might manage a trip to Wales or Scotland in the spring by way of a warm up. Who knows, by the end of March the Highlands might be blanketed with snow again!

It certainly is a highway though was empty of other traffic the day I walked it. I reckon mid-Wales is best for pathless solitude!

Riverman wrote:â€™Twas not to be.

As a consolation: I know the feeling... picking a week, traveling a long way and then battling the elements, and worse, my own expectations.

Some years ago I came within a mile of the summit of Beinn Dearg, Torridon, around the back, but o no, hiding behind a rock watching this... 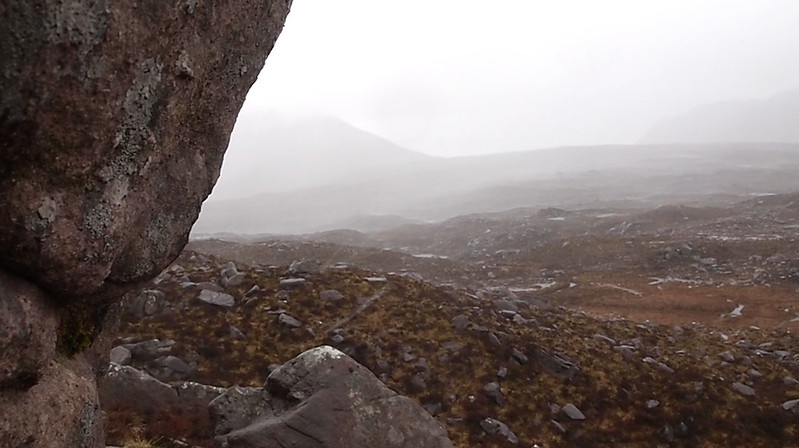