It was time for another Bongo trip. Weather watching looked hopeful for Skye. Stopped at the Sligachan campsite. Tried to find a quiet spot, but was too busy for that. England were playing Croatia in The World Cup. The hotel was heaving too, but managed to get a standy-up burger to chew. Greatly outnumbered by the Sassenach, but us few neutrals enjoyed our night

I remember a young French family had parked near the Bongo. Now, the Bongo maybe doesn't meet all anti-pollution criteria, so when I got her fired up the next morning, the look of horror from Pa-pa's face was priceless. Anyway, off down Glen Brittle, I toddle along, rather glumly diverting eyes hillwards, to very low level cloud. Ah well, it's bound to lift. By the time I got to the car park, I was not so sure

Must admit I was very pleased to see two guys heading up track in front of me, especially as we entered the fog. I was not so pleased when they said they were off to do the Cioch and tata

By now, it was impossible to see much more than 20 yards, as I climbed upwards into the corrie. Might as well have been wearing a blindfold. 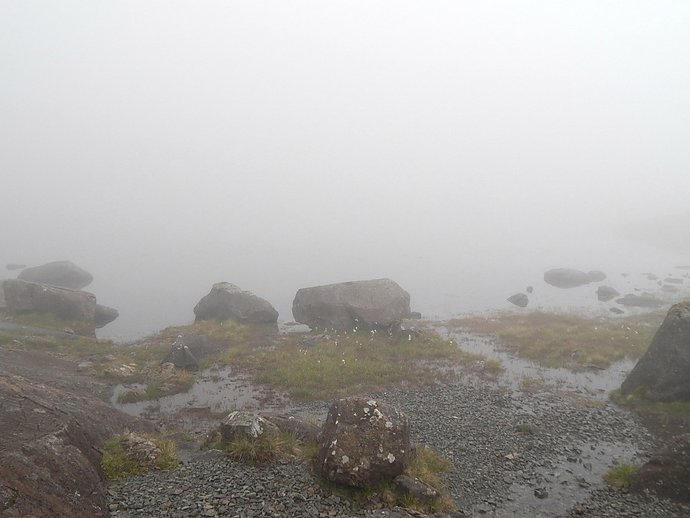 So, this must be the lochan then?

I came to some water and presumed this must be the Lochan. It was incredibly quiet, still and spooky. I wandered round trying to find the start point for the climb up the Great Stone Chute, but couldn't find it. After a while I thought I could hear voices, male and female. Positive sign, perhaps? Alas, no. I was still left biding my time, waiting to see if visibility would help me out.

In actual fact, it was the other sense, noise, which came to my assistance. Began to hear the occasional crunch, or rattle of stone. Something moving up there, somewhere. Moved around and gradually got a better idea of where it was coming from. Yes, definitely, someone above me and getting nearer and as he emerged, I could now make out a vague semblance of a way up. 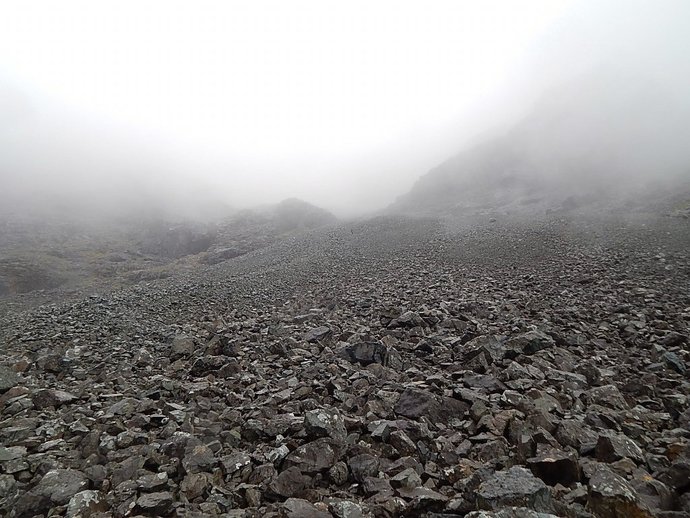 You probably can't spot the walker coming down? Had I been more aware of the dangers, i might have stood clear.

Had a wee chat with the guy. Said he had waited a while for it to clear, but gave up. Maybe I would get lucky? I was a bit unsure about continuing but, perhaps the lack of vis, limited my sense of danger. The going was certainly steep and tricky, two forward and one and three quarters back sort of stuff. Eventually made it up the bealach. Surprised by how small it was. Couldn't see a thing, but it seemed a bit brighter so had a long leisurely food stop. Negotiating the way up. Wee, but welcome shelter at the equally wee Saddle.

Just like that, two guys appeared coming off Alasdair. One obviously a guide, the other the pupil. A brief chat and they were off, into the clag and Sgurr Thearlaich. Was a bit spooky getting occasional glimpses and hearing them as they continued along the ridge. Scrambly bit of ridge to the summit. Straightforward, so they say.

Ah well, it's not going to clear, am I going to do this? It's described as one of the easier Skye Munro's, but... am no' so sure footed. I must admit I made my way to the top very gingerly, but make it I did, over the "straightforward scramble."

Still I played at the waiting game for some 10-15 minutes at the summit, hoping it would clear, before making my way down, equally slowly and disappointed. 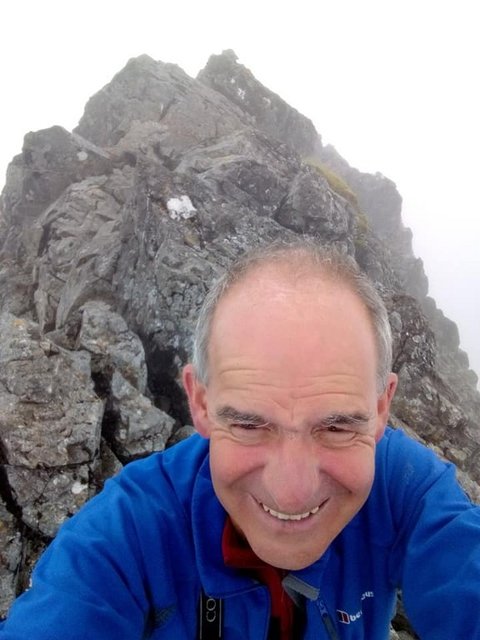 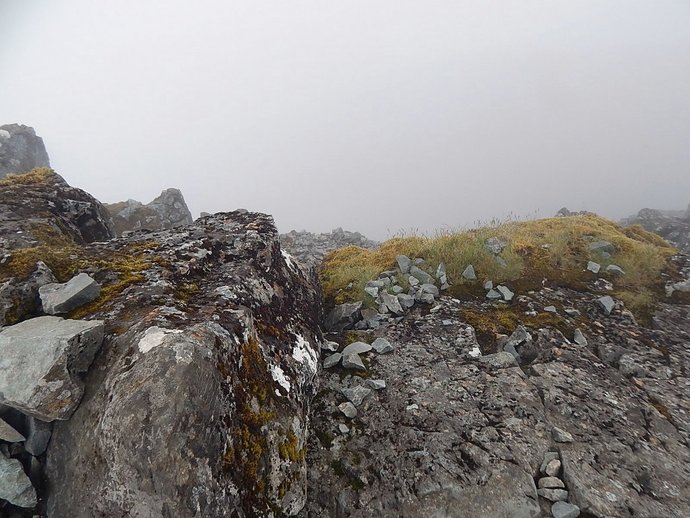 Over the edge. Might have been no bad things to have been in the cloud.

A family of four were just emerging from the murk, at the top of the scree. Little do they know how close they came to disaster. Little did I know how close I would come to causing that disaster. We exchanged greetings and I do remember them saying they didn't think there was anyone coming behind. Anyway, their youngsters were soon galloping up Alasdair and I started off, down the (not so) Great Stone Chute.

I cant remember how far I had gone, I think maybe a few hundred feet, when I shifted from one sliding cluster of scree, onto the supposedly more substantial foothold of a larger boulder, maybe about the size of a small car wheel and tyre? I had hardly put my foot on it, when it suddenly shifted, tumbled forward and downward, almost in slow motion. I made some pathetic attempt to reach down to stop it, but it was off. Surely it can't go far. No, it's off and gathering momentum

How could I have been so careless!

I could hear the dull clack and crash of big stone, hitting more stone, which seemed to last for ages. Likewise, my nostrils filled with that smell which one stone crashing off another leaves. I shouted, warnings to anyone below, but knew it would be virtually useless. That boulder was going to the bottom and nothing would have stopped it! At the speed and momentum it was going, it would have went right through anyone, or anything in it's path before they knew it, climbing helmet, or not.

Suddenly it became quiet. Now I would hear the dreaded cries of help from below!? My heart was in my mouth as I gingerly made my way down, with all sorts of visions of the calamity which might greet me at the bottom. Still no noises, or cries for help, but that didn't mean disaster did not lie in wait. Thoughts were racing. Just praying all would be okay. Gradually I emerged from the fog and could see no body, or crowd of people at the bottom. I had escaped, but still felt sick to the bottom of my stomach. Is this game really worth it? I could have killed someone. 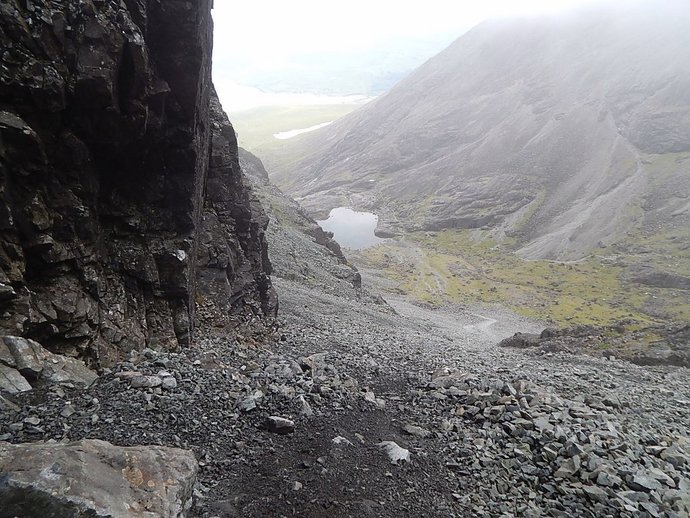 Emerging from the mist to find no disaster awaiting me at the bottom.

Saw some others sliding down the An Stac scree, further round the corrie. Possibly had been on the In Pin? Looked even steeper than my chute. Finally made it down the last few yards of scree into the corrie, now a bit more in control of my heart and head. Lot of folk now had a lot of people wandering around. Thank god there was none of them heading up my way. The mist was clear to reveal the true beauty of this dramatic place. Two climbers descending the An Stac scree, into Coire Lagan 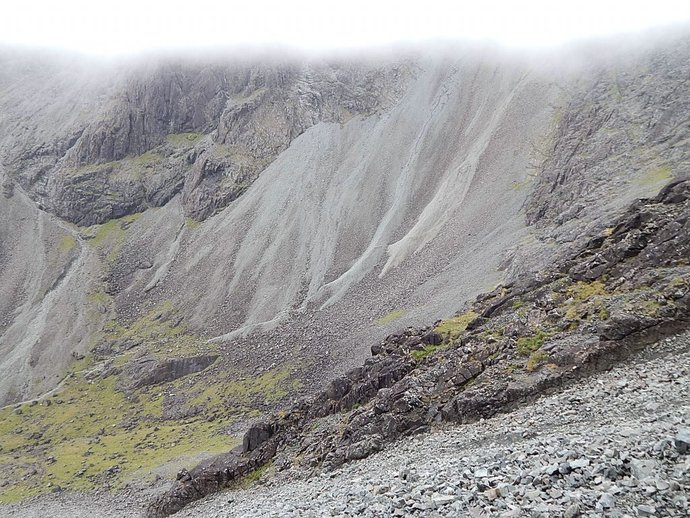 An Stac scree, which to me looks worse than the Great Stone Chute, but apparently not so? 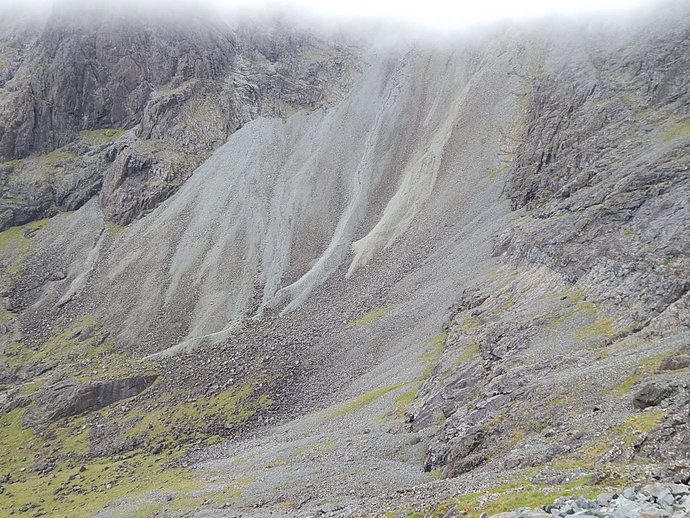 I can just make out the climbers coming down An Stac scree. 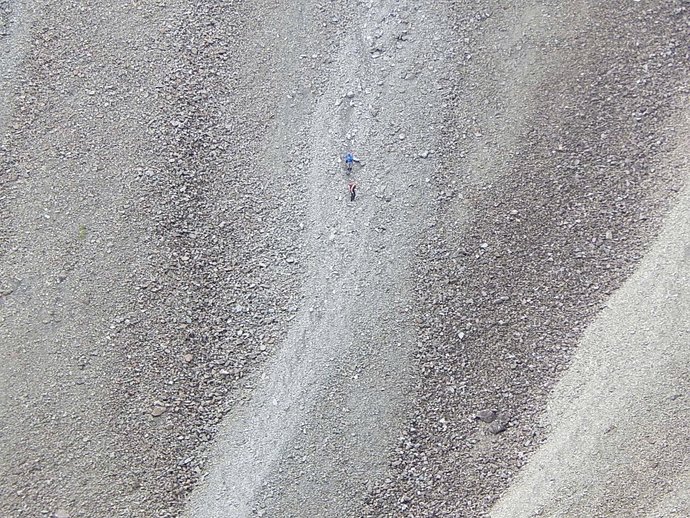 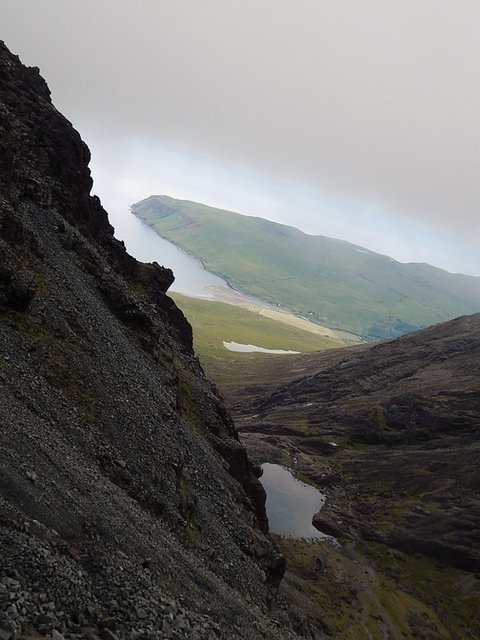 A peak round the corner, over Coire Lagan, to Loch Brittle. 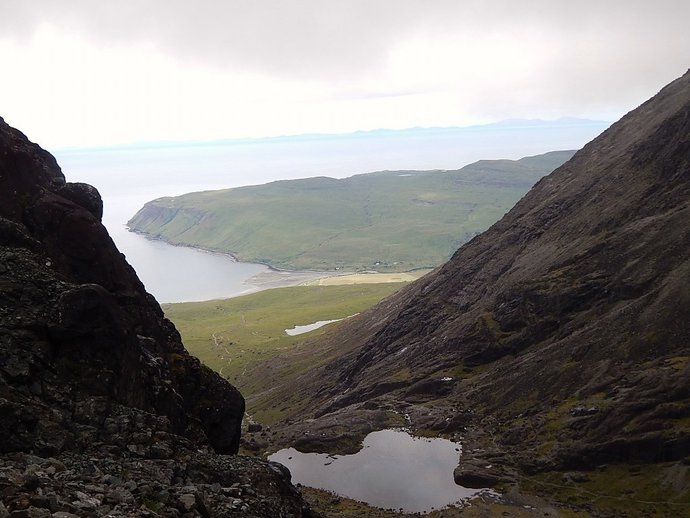 The route description says "be sure to enjoy this stunning location, looking back at the Stone Chute and the peak high above - it is almost impossible to believe that the route you have just done is feasible." Enjoyment wasn't my uppermost emotion, but one of relief and as I calmed down, I soaked up the emotions of this place and the achievement of doing the trip, without injury to myself, or others. Over Lochan Lagan to Loch Brittle. 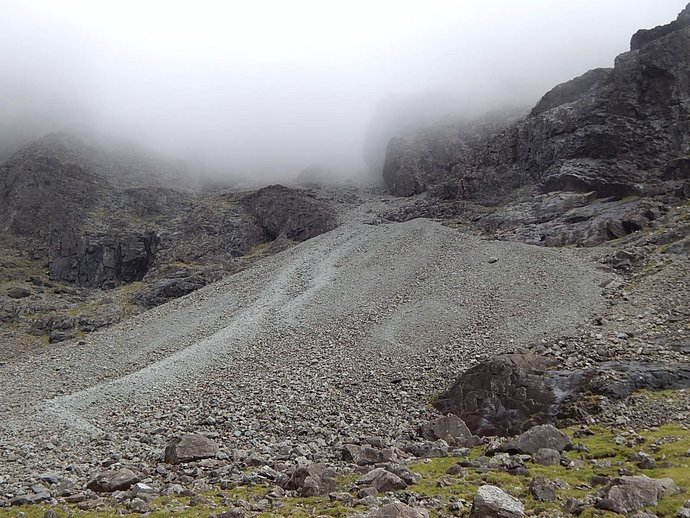 A look back up the Great Stone Chute. "My boulder," now resting safely, somewhere at the bottom. 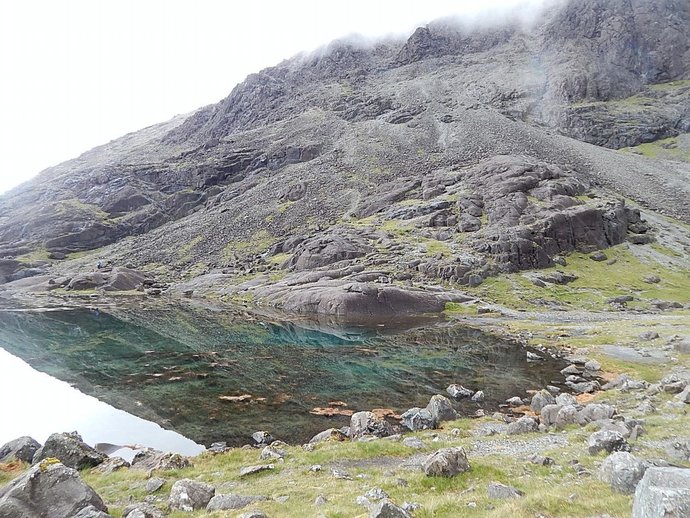 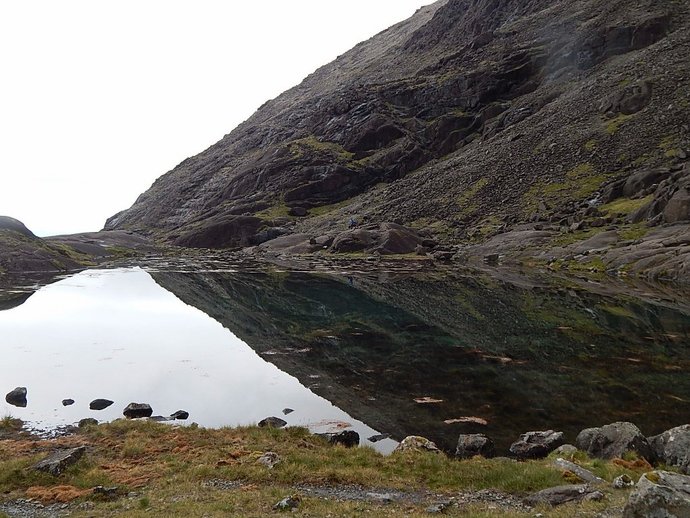 Coire Lagan. A magical place for sure. 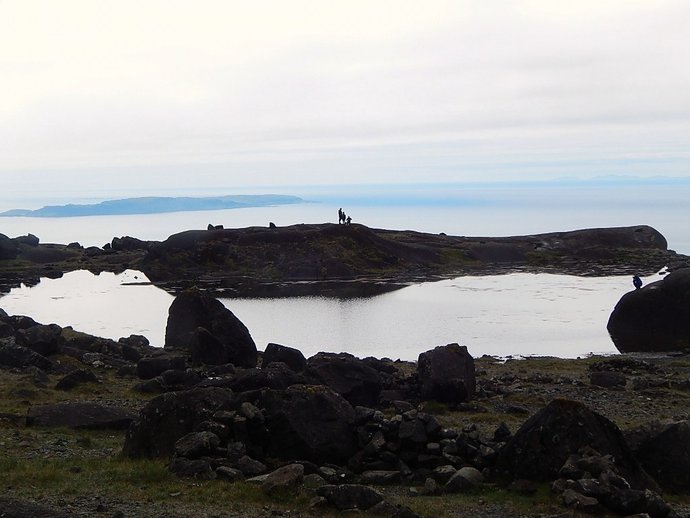 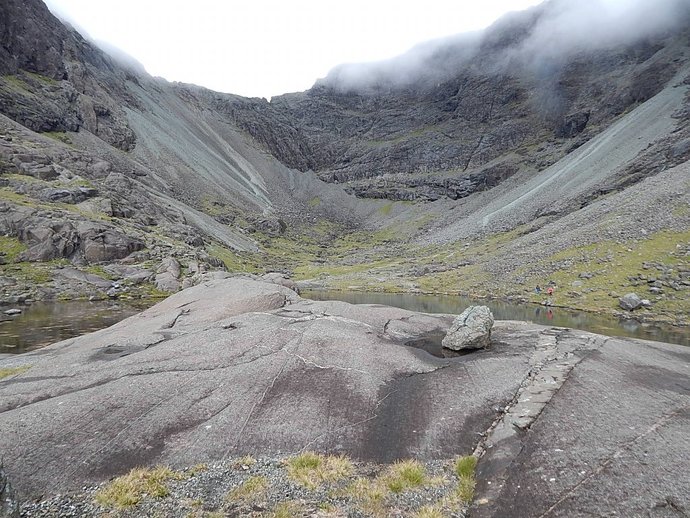 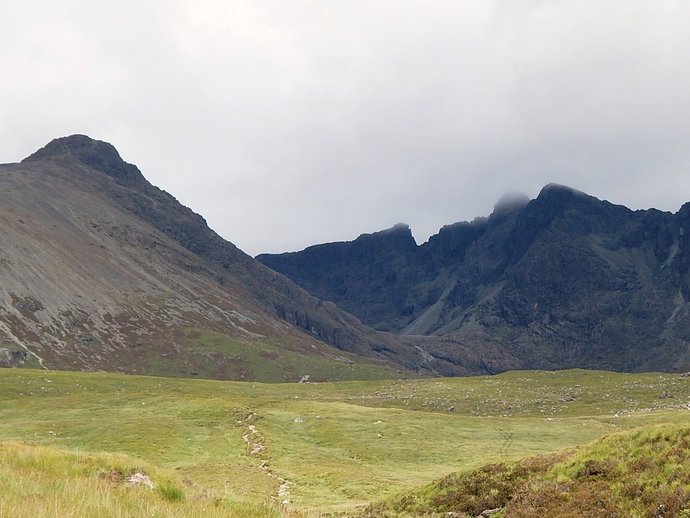 Lower slopes of Sgurr Dearg, left. Sgurr Mhic Choinnich, jutting up in the centre and Sgurr Alasdair holding onto the cloud.

I was somewhat deflated and elated at the end of the day, as conditions improved, providing better views of the corrie, surrounding crags, Glen and Loch Brittle. Made it back to the Bongo in just under six and a half hours, despite blundering about in the corrie for what seemed like ages. Took time out to drive to Elgol, than back to Loch Slapin to size up the climb next day, Bla Bheinn ....... oh, might have had a wee beer, or two, too 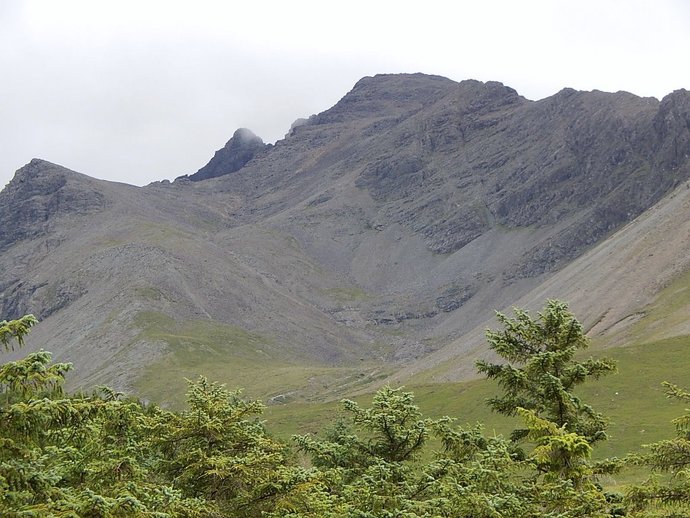 Sgurr na Banachdich, which I never saw when I climbed it. Across Loch Scavaig. Think that will be Bla Bheinn, rising to the right, Marsco centre and Sgurr na Stri, left? 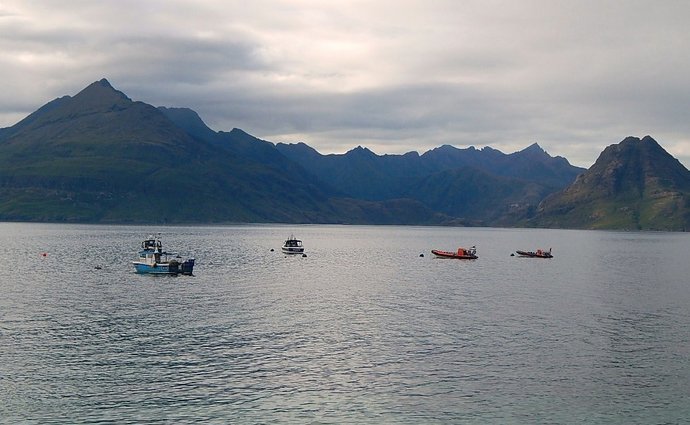 You were lucky! Sometime in the late 50's A geology student a only few years older than I said that a few months before, a boulder the size of a small car had bounced over him on the "Great Stone Shute"

past my sell by date wrote:You were lucky! Sometime in the late 50's A geology student a only few years older than I said that a few months before, a boulder the size of a small car had bounced over him on the "Great Stone Shute"

Well, I thought the boulder I dislodge was about the size of a Mini wheel, so maybe it came off the boulder your buddy managed to dodge ....... but, yes, for once I did feel lucky!