Forth and Clyde canal - Port Dundas to Bowling

Forth and Clyde canal - Port Dundas to Bowling

I had never meant to pick up the final section from where I had left off before, even if I had reached Stockingfield junction - a spur of canal runs from the junction towards the old city centre of Glasgow, and so my plan was to start from the basin at Port Dundas and walk back to the junction and out the main line of the canal to the end - except that I now had to do a bit of a detour from the junction to where I'd left off the last time and back.

Christmas on a Tuesday had left me with three free days beforehand, and although I genuinely enjoy finishing my shopping at the last minute, I decided that two days were plenty for pottering round town, and one should be a walking day.

For somewhere I've never heard of, Port Dundas is surprisingly close to the city centre - only about ten minutes walk from the bus station, although on the other side of the tangle of the M8, cutting it off from the old Townhead. Proper regeneration of this area was one of the things which the Millenium project which reopened the canals tried and failed to get funding for, so although it's connected to the canal again after being cut off by the motorway construction, the basin is just a quiet ghost at the back of various company yards. This neglect does mean that the entrace to the basin still has one of the canal's original bascule bridges, almost all replaced elsewhere. The next stretch is squeezed in around the roads, but a view to the west shows how high up this still is - there hasn't been a lock since the canal summit, and there are long flights to go to reach the river further west. Round a sharp bend, Spiers Wharf was even more surprising, although I had at least heard the name - a great expanse of mainly early Victorian warehouses, but also the Georgian building which was the canal offices from 1812 until they moved to Edinburgh 10 years later with the opening of the Union canal. Beyond Spiers Wharf and round another bend was another basin at Hamiltonhill, the terminus of this branch canal for a time while the last section was built. According to a sign here these are the oldest buildings on any Scottish canal, but they don't look in great condition, and if they really do still belong to the canal authorities then they should be ashamed of themselves. The oldest buildings on the canal

Beyond that the canal looks a bit neglected - a stretch past Firhill stadium and a basin used for logs and a substantial church, but all quite untidy round the edges. The towpath runs on unbroken towards Bowling, but you have to cross the canal to get to the towpath to or from Falkirk - in the old working days there was a floating bridge here to take people and horses back and forward, but now you have to slip down and through a narrow road tunnel and climb back up on the other side. I had an extra bit to do up to the Lambhill stables and back, where I'd turned off the last time, but as it's now run as a community cafe I didn't mind too much - terrible disappointment was in store for me, however, as everything had already closed down for Christmas. Back at the junction, the way I should have approached it originally, and once again on the wrong side - this is a very quiet place now, and it was odd to try to imagine it busy. The next landmark was the flight of locks at Maryhill, five locks with basins in between, to allow boats to pass coming up and down the locks when the canal was busy. Just beyond the locks is the Kelvin aqueduct, which although it doesn't look particularly spectacular now compared to later achievements, was the biggest in Britain and possibly even in Europe when it was built, attracting people just to watch ships sailing by 70 feet above the river. It's not easy to get a good picture of it, either - it's easy enough to drop down to river level, but there are a lot of trees on the banks.

Just beside the aqueduct is a line of pillars once belonging to a railway bridge, where a sign promised me a heron, but which turned out instead to be inhabited by a pair of cormorants, which seemed to be a long way from the sea.

The heron was living round the corner instead, at the start of a straighter flatter stretch which led along past Kelvindale station on one side of the water and the old Temple gasworks on the other. I walked this stretch of the canal once before, without particularly meaning to, when I was living in Wolfson Halls nearby, but I can't say I remembered much about it. It was lunchtime, and I was pinning my hopes on the pub at Lock 27 (once also the site of a lifting bridge), but some people just ahead of me went in and were quickly sent out disappointed. Instead I turned off at a path just after the next bridge, where a sign promised local services, but all I found in one direction was Screwfix and similar places, and the best the other way seemed to offer was a newsagent selling chocolate and things.

Round a sharp bend was another heron, this time perched in a tree, where I was quite sure it shouldn't be - herons don't belong in trees, they stand at the water's edge and look superior. Heron in a tree

Now that I was through the city the hills were begining to draw closer to the north again. Through Maryhill and Kelvindale the canal had had a surprisingly rural feel - there are houses all around, but they turn their back on it and leave it alone. Out towards Drumchapel, however, the houses seem to look at it again, and there was a bit more rubbish around, including the classic shopping trolley.

I had never realised from the road how close the canal comes for a while to the route west, but some of the views across the canal were very familiar, with open ground between the water and the A82. Out in the west

I reached Clydebank about 3 - it mostly seems to have turned into a huge shopping centre, but at least I could find Greggs and get something warm to eat and drink, and it was a definite and welcome landmark. The next real landmark is the drop lock at Dalmuir, where instead of raising the level of the road when the canal was reopened, the lock was built to lower the water level and allow boats to pass under the road before raising them again on the other side. 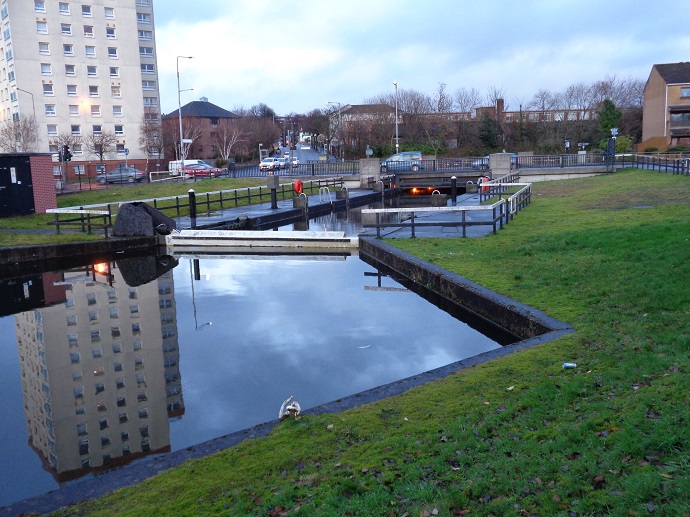 Dalmuir also had a lovely sculpture commemorating a local shipyard, a marker that the canal and the river were now also drawing much closer together.

The light was beginning to fail as the Eskine Bridge came into view, with the black and white Bridge House at the top of the road to the old ferry - unless it has changed its name, it would seem to mean the swing bridge over the canal which gave access to the ferry, rather than the modern bridge. 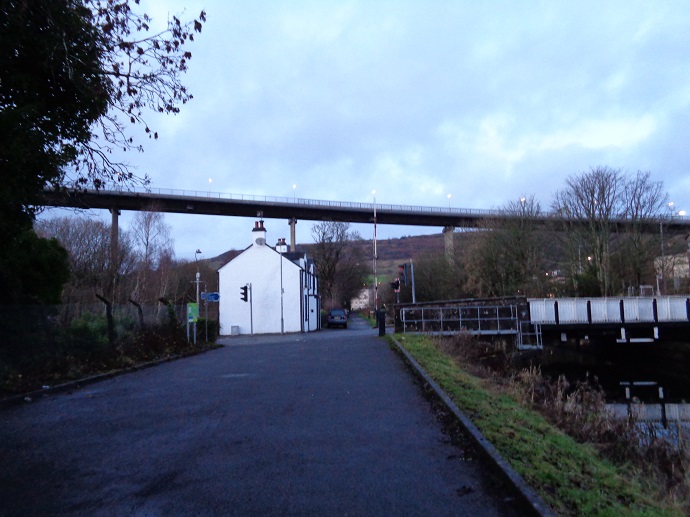 I've crossed the bridge many times in earlier days, heading to Tarbert from Edinburgh along the M8, rather than straight out the Great Western Road on the bus, and looked at the river often enough, but I don't think I've ever realised it crossed the canal as well - maybe I've always been too busy looking west.

This final stretch is bordered by a nature reserve called the Saltings, and then more rough ground along to Bowling, where there was just enough light to see the harbour with another good old building standing over it. It's an interesting spot, a bit tangled up in the arches of a disused railway line, and every time I go past on the Waverley I want to go and have a look at it, but although I did have a bit of a prowl around I still need to go back some time in daylight. So this time I got myself onto the right side of the current railway line to walk along to the station, my crossing from sea to sea, or at least river to river, complete.

I've got a bit of the Union canal still to do, I know, as I haven't reached the Falkirk Wheel from that side, but I'm not sure just how much - quite possibly only from Falkirk High. I suspect that the best thing, however, would just be to walk it all again, if and when I can.

Re: Forth and Clyde canal - Port Dundas to Bowling

(This was accidentally posted with just the pictures - I've finally got round to putting the words in as well.)