Forth and Clyde canal - the Kelpies to Banknock

Forth and Clyde canal - the Kelpies to Banknock


I set off along the canals once before, more years ago than I can quite count, and I might even have got to Falkirk - but since I'm not sure just how far I got, when I wanted to start up again the easiest thing to do seemed to be to leave the Union canal for now and walk the length of the Forth and Clyde - no bad thing, since it meant including the Kelpies, and the link to the River Carron and the sea.

I had to overshoot slightly to get to the start of the route - train out to Falkirk, and then bus back to a stop which was easy to find, as it was painted bright pink - although my first attempt at catching the bus was less successful, as it sat for ages at the back of the bus bay saying 'Not in Service', and then put up its number and destination and drove off all in one movement, before anyone could even try to get on!

From the road it was a wander across the park to the Kelpies, with the misty Ochils showing behind them. 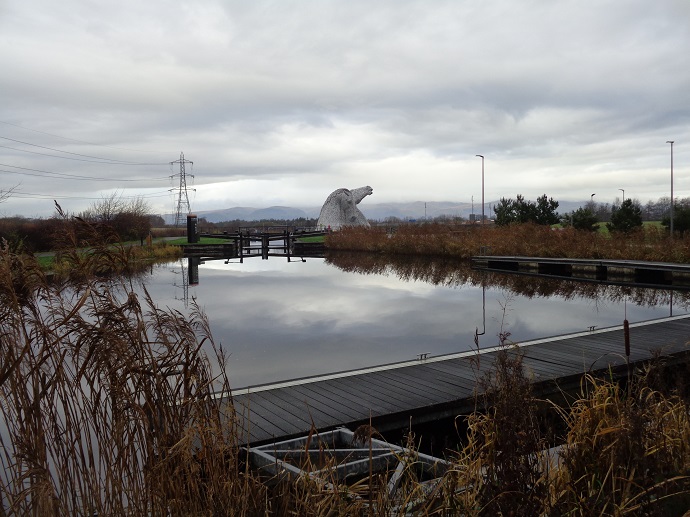 There are mixed opinions about the statues, of course, but I quite like them - the sheer size of them is quite powerful when you're standing nearby. I had intended just to start from the sealock by the Kelpies themselves, but in the visitor centre I picked up a leaflet about something called the Charlotte Dundas trail - information boards about one of the earliest working paddle steamers, which was built in Grangemouth and tested on the river and canal here, and so I followed the canal down to the lower sealock to read the various bits of information.

This section of the canal, and the bit around the Kelpies, are not the original route - it's quite obvious on the map where it turns off from the original line which led down into the basins of Grangemouth docks, now the line of the access road. When the canal was reopened the lock by the Kelpies was the main access into the river, but as it's upstream of several low bridges a new stretch was built to take the canal below them, and the canal and the river run closely side by side. The river itself is a bit like a canal here - it was quite severely tamed by surrounding industries, particularly the Carron Company ironworks upstream.

I walked down as far as the last lock, and then crossed and came back up the other side to where I had started. While prowling I managed to fall with quite a thump, slipping on the wet metal edge of one of the little pontoons, but I decided that I was in one piece, and at least I hadn't gone in the water - it wasn't all that long since I'd slipped on wet grass on Beinn Challum, and it felt quite wrong to go out walking and come back with sore arms! 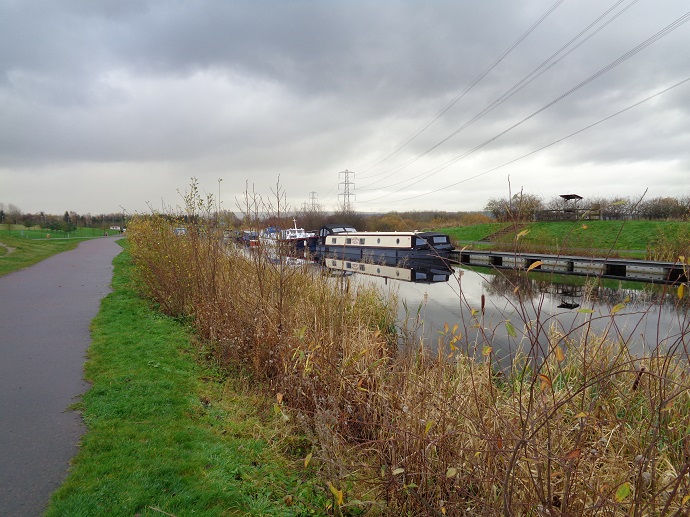 The start of the canal

Beyond the Kelpies the canal looked more neglected, and the towpath became a little road through an industrial estate - natural enough, as the canal would originally have attracted industry, but everything has turned their backs on it long ago. This was the most urban section until Glasgow, with the canal tucked in a corner, and the fact that it's not part of the through route to Edinburgh makes it a bit of a backwater from that point of view as well.

Until now everything around had been fairly modern, but a lock beyond the railway crossing had what looked like the first old building, presumably a lockkeeper's cottage. In several places in the town the canal was showing off its old industries - here on the site of the old Camelon and Rosebank distilleries. One lovely marker was the early 19th century Union Inn, still guarding the basin where the Forth and Clyde and Union canals originally joined, by way of a flight of locks demolished and built over in the 1960s. 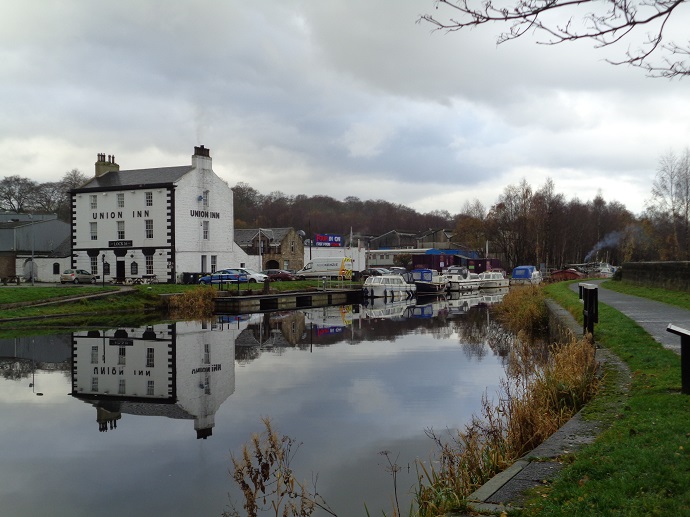 A cold November day obviously wasn't the time for canal boats to be out and about, but every so often I would come across a little cluster of moored boats, some of them apparently in use. Smoke from the chimney

As I came along to the Falkirk Wheel a heron almost insisted on having its photo taken, standing posing on the near bank with a clear reflection in the water behind it. The Wheel is the other great landmark of the canal, built to relink the two canals when the Union Canal was reopened as a Millenium project. It's impressive, and unique - the only boat lift of its kind in the world - and has been very good for the canals (but it's all a bit modern for me!). I went up to the visitor centre to the toilets, anyway, and stayed to eat my lunch on a nice warm bench with a heater underneath, because there had been a shortage of benches beside the canal.

I was now back on the usual coast to coast walking route - and more or less out of the towns, which possibly made more difference. ^But this was an attractive stretch, water and trees and good towpath and occasional ducks, and I enjoyed the feeling of coming out into the countryside. 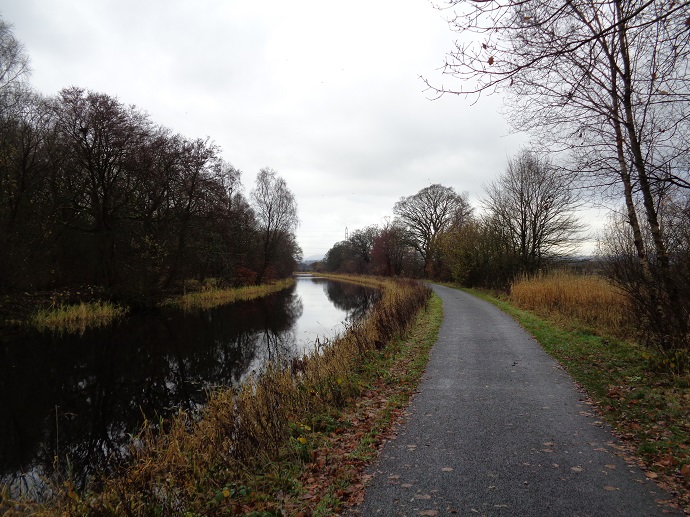 It was interesting to see how much the canals foreshadowed later transport routes - this section doesn't stick quite as closely to the railway - or vice versa - as the Union canal does to the railway between Edinburgh and Falkirk, but just here they were shadowing each other quite closely. 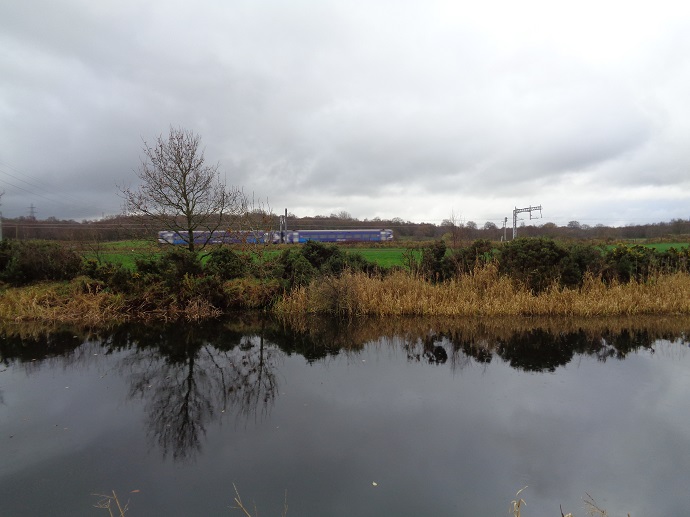 On this stretch I finally passed the first - and only - people of the day moving on the canal, in a rather colourful boat which clashed a bit with the late autumn colours all around. 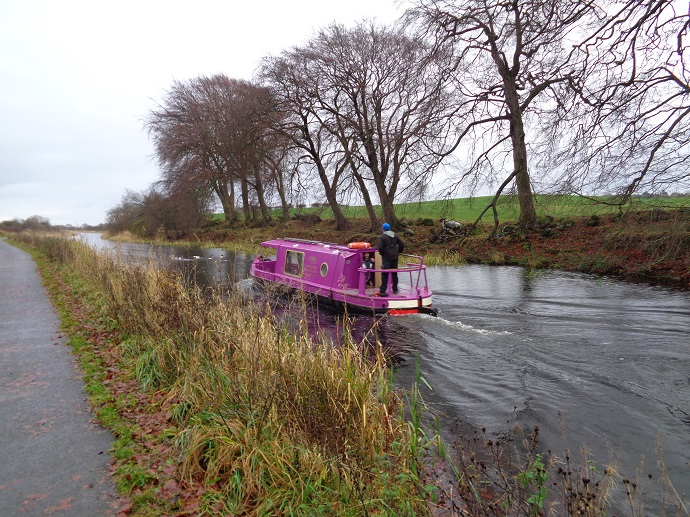 Boat on the move

Bonnybridge briefly provided houses again, with a garden running down to the towpath, and then another empty stretch led on to the first lock since the wheel, and a once imposing house now falling into ruin. 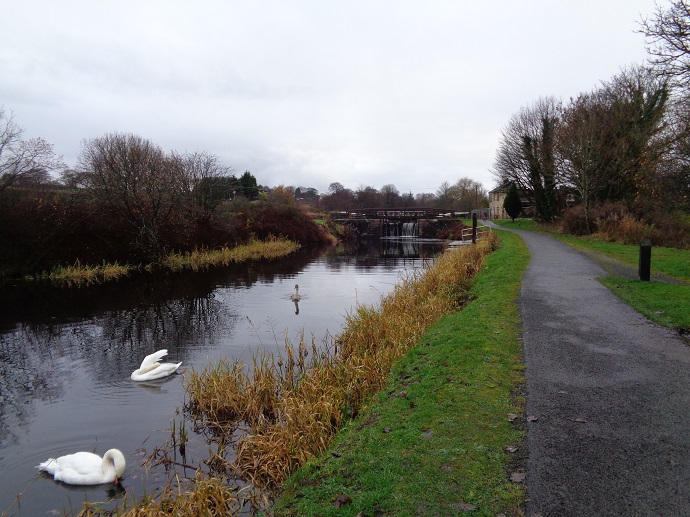 Two bridges crossed the canal close together, one carrying a very minor road, and then one carrying the M80 - it's always an odd experience to look along a motorway from somewhere else. 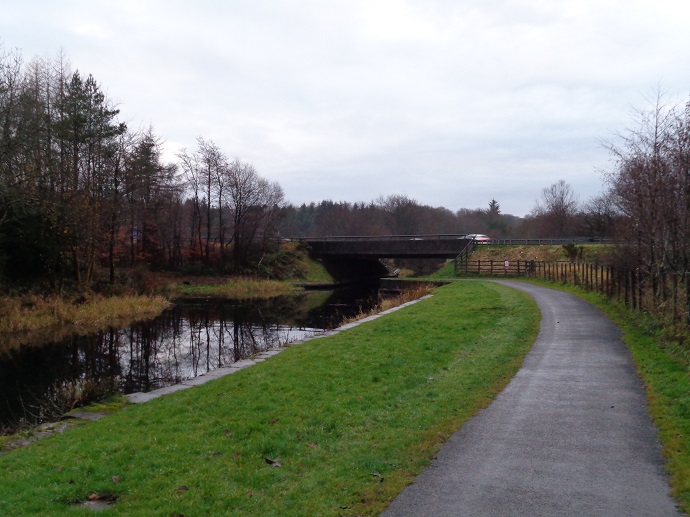 I had meant to carry on as far as Auchinstarry Marina, which was near Croy station and would make it easy to pick up again from the same point, but after the detour at the Kelpies end I knew I wasn't going to make it that far in the light, and, dark or light, wasn't going to make it in time for the next bus, so that I would face either a dark walk down to the station or a long cold wait. So an alternative was necessary - I knew I could pick up the bus anywhere along the road from Bonnybridge into Kilsyth, it was just working iut where was easiest 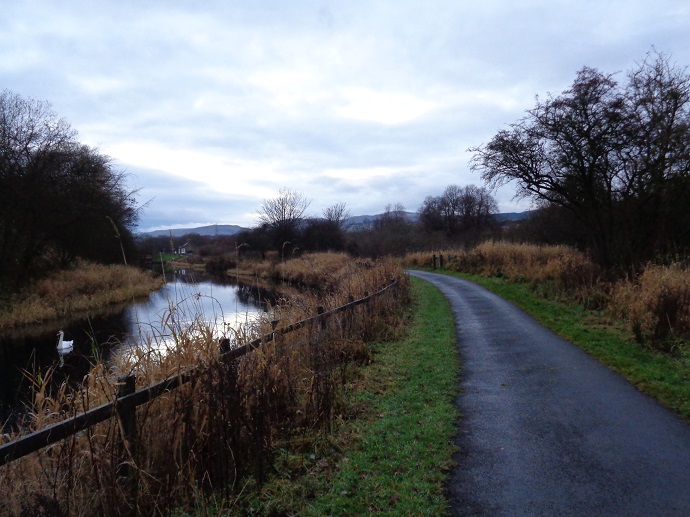 I left the canal at a place called Wyndford Lock just to the west of Banknock, where a minor road crossed it - more of a landmark than I expected, with a tiny cluster of buildings and a junction of cycle paths. 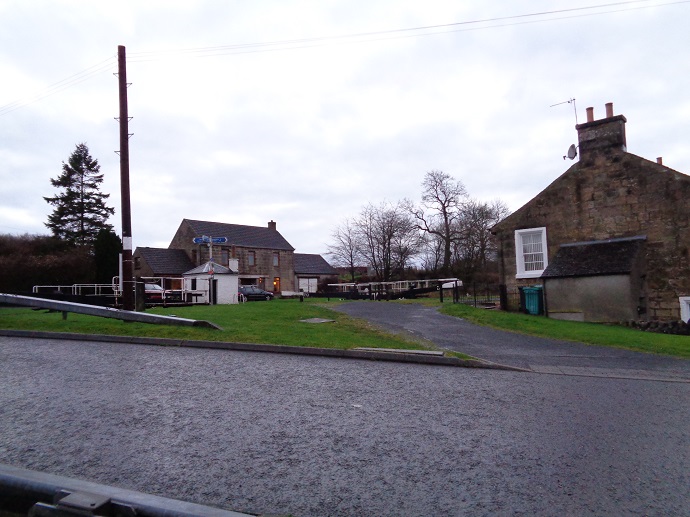 I wasn't very sure of the bus times, but I didn't think I could have missed it, although I started to doubt that as I waited longer than I expected - the bus eventually came along quite late. But the timing was fine at the station end, as I walked off the bus, across the unfenced platform, and into the open door of a train.

It's a nice walk that one, I stay in Banknock and regularly walk that section of canal with my dogs

I'm not sure if you were aware of it when you stopped but Wyndford Lock is just 1/2 mile the east of the Watershed of Scotland so a very appropriate place to stop. It is the 2nd lowest place on the Watershed (46m), the lowest being where it crosses The Great Glen near Laggan Locks (35m). Apologies if you already knew this.