only Corserine and the 48 year loop walk

only Corserine and the 48 year loop walk

Donalds included on this walk: Corserine

Some of my earliest memories in life are from staying in Dukieston Cottage on Forest Estate, a house tied to my dad's job then as a forester and for some time I've wanted to climb a hill in the vicinity. Corserine would be suitable as it would enable me include a walk I recall from about forty-eight years ago up to Loch Harrow.
Unfortunately the sky to the south was rather gloomy looking as I passed though Carsphairn and I had thought I'd have to go elsewhere. However, I decided I'd visit Dukieston at least and, to my surprise, a little pocket of relatively clear-topped hills appeared to my right. A quick check of my map confirmed that this was likely Corserine I was looking at so, spirits lifted, I set off down the Forest Estate road.
I stopped to photograph Dukieston then carried on to the car park where doubts set in again as it looked as if Meikle Millyea might be the better option. Indeed, I even set off for the latter but half a minute later Corserine re-introduced itself, this time bathed in sunshine and clear-topped. So I back-tracked and resumed plan A.
The going was very easy on the well-made private road and there were a few orange-tipped butterflies fluttering about to add to the interest. Quite a haul up to the last section of road which actually goes right up to join the hill path. En route I noted the two diversions to Loch Harrow for later inspection. All along the way-marking was very good; just follow the yellow arrows.
It was a pleasant surprise to find how clear, easy to follow and squelch-free the path was. Some stretches were quite carpet-like underfoot. Certainly helped my decrepit body make its way up there.
The clear-toppedness hadn't lasted though and for most of the ascent I was looking across the Folk Burn corrie at swirling cloud.
I got to the the large cairn that marks the start of the summit plateau and here I switched to following the northern rim of the Polmaddy Gairy corrie, there being paths on either side of the plateau as well as one in the middle I think.
Now Carlin's Cairn was showing up very well (well it was actually the only visible landmark around but still a good one) and I could make out the summit trig point. No blue skies but at least I could see something and it was very pleasant if not exhilarating plodding along the corrie edge with the cloud bubbling and breaking around about.
I wondered if any trees planted by my dad were still in view. Daft, I told myself, to think they wouldn't all have been felled by now but the person I spoke to in the estate office later begged to differ. There might still be something there.
Made my way back down with views south and south west now slightly improving and met some folk on their way up. I promised to keep an eye open for what sounded like a dog's missing green light but, of course, quite a lot of the return route was coloured green so I didn't manage to save the dog's day.
Diverted twice to Loch Harrow at two different points. I'd hoped to be able to skirt along the loch edge instead of doubling back from the first diversion but that way looked a bit squelchy. No great hardship to double back though.
At the second diversion to the hydro dam I was able to join onto another road and so avoid another doubling-back. At this point I had, in a sense, completed a longer loop walk having returned to the shore of Loch Harrow for the first time in about forty-eight years. Ok, on that first occasion I had been in a push-chair for at least part of the walk from Dukieston but I'm counting Loch Harrow shore as the start. So much followed. 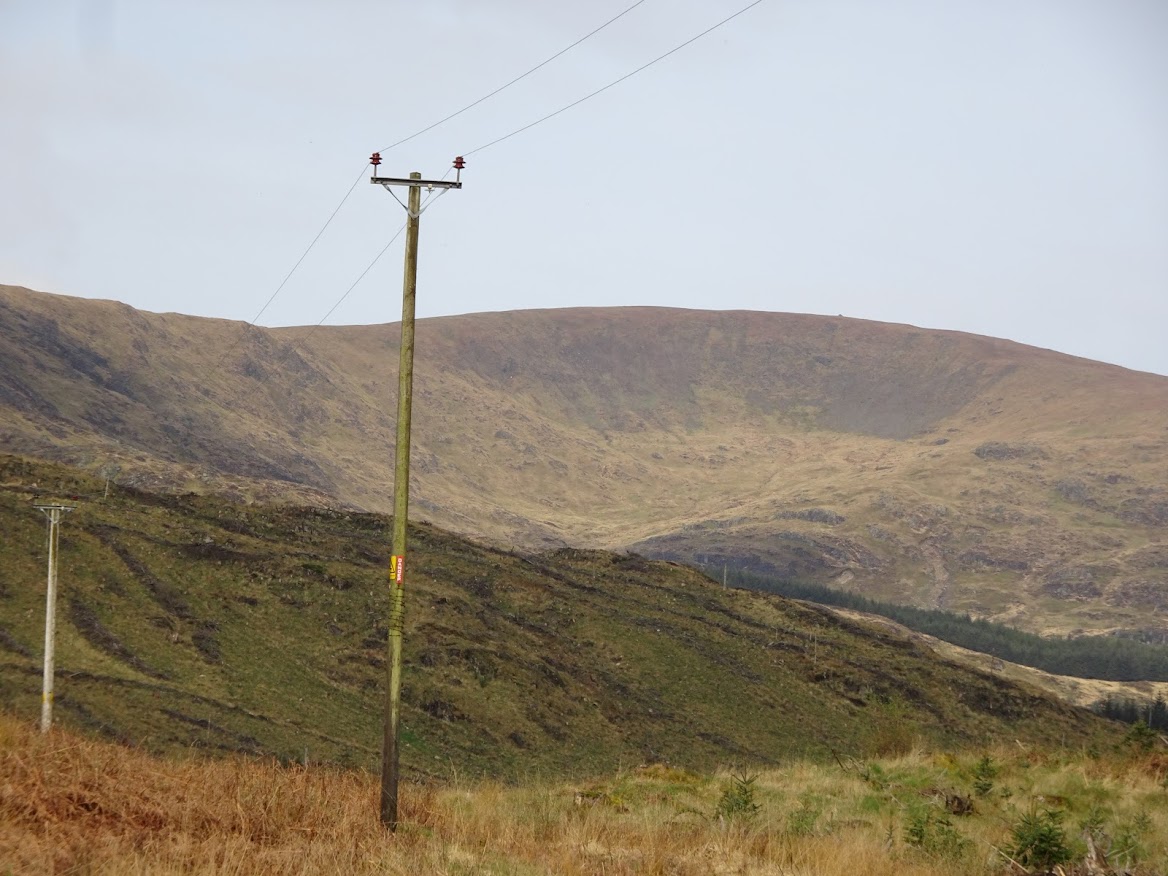 Corserine seen from near Fore Bush. 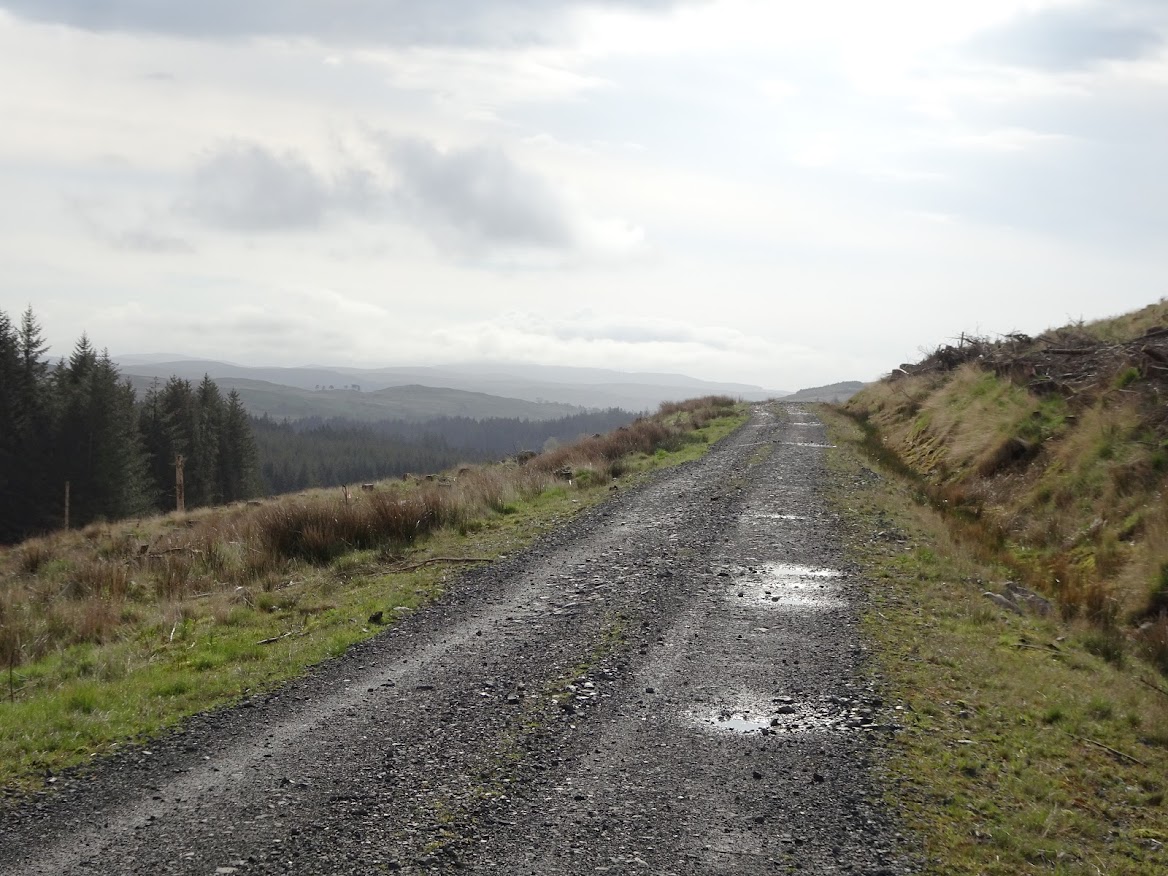 A good road to walk on for the first 4km. 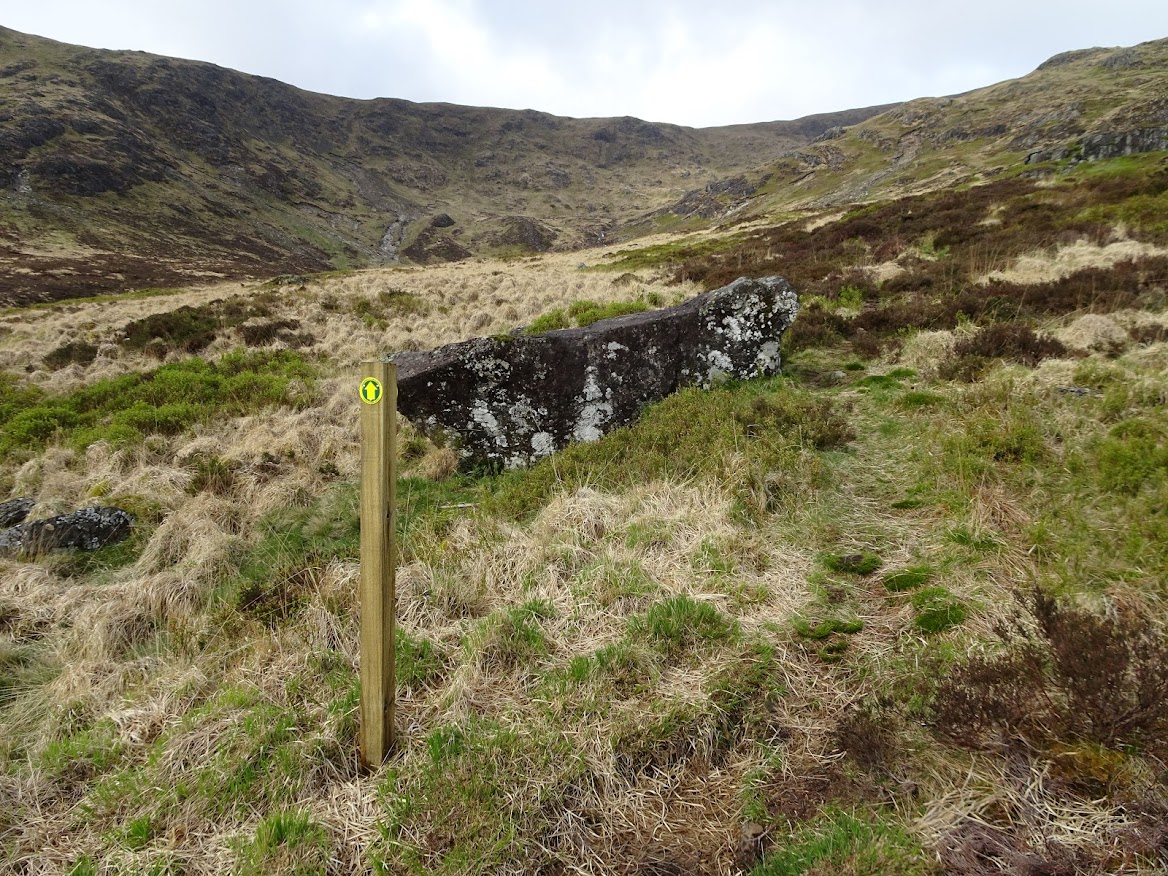 The road runs right up to the start of the hill path and is way-marked with these yellow arrows all along the way. 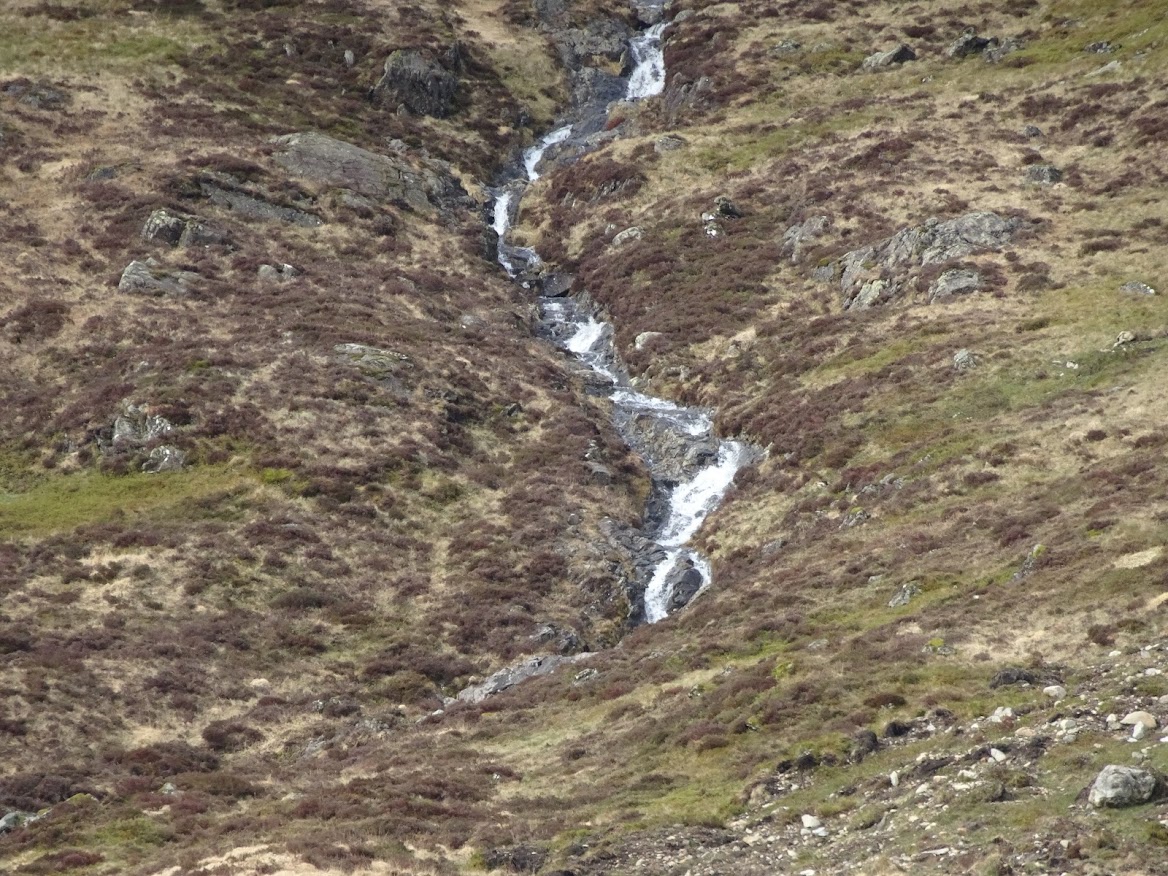 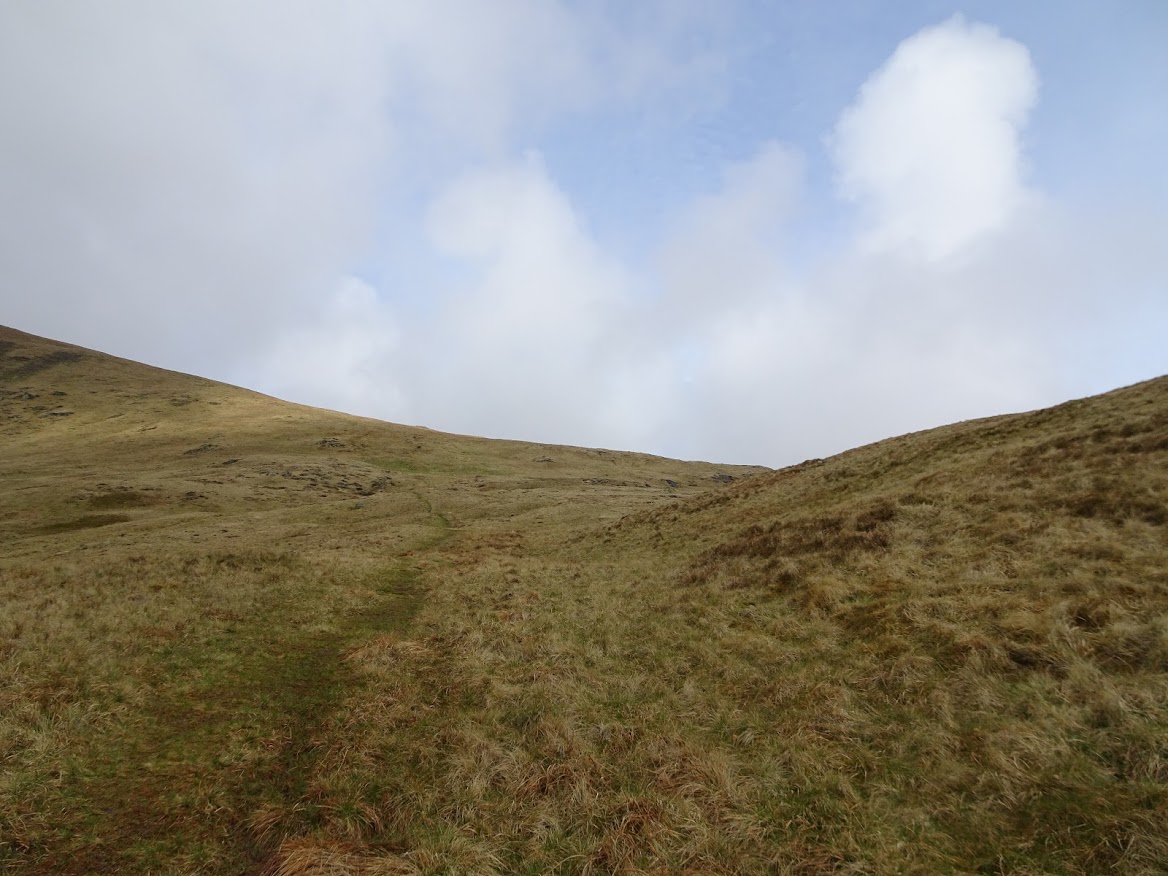 I found the path to be very good, clear and rarely squelchy and it led all the way to the first large cairn on the summit plateau and, beyond, offered alternatives skirting northern and southern corries as well as something in the middle I think . In this photo the weather is toying with brightening up but it never quite got going. 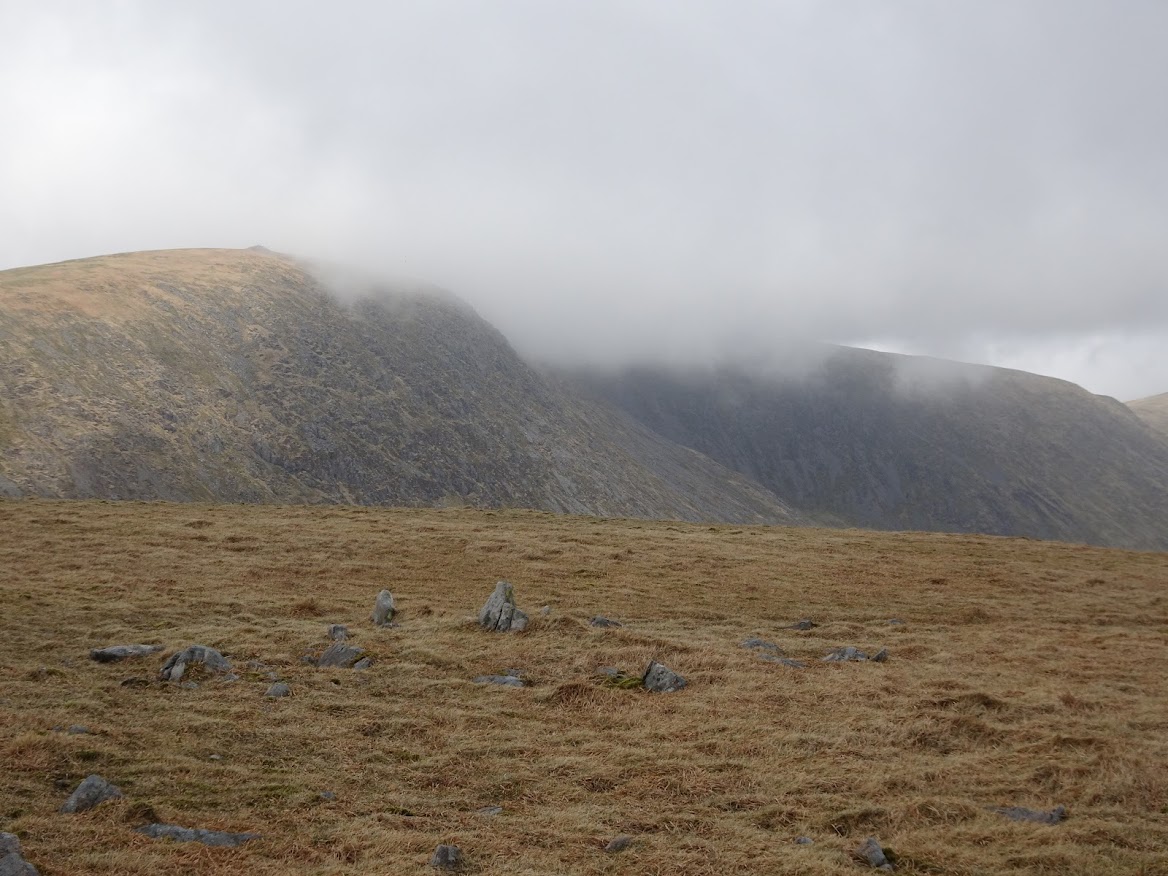 At least I get to see Carlin's Cairn. 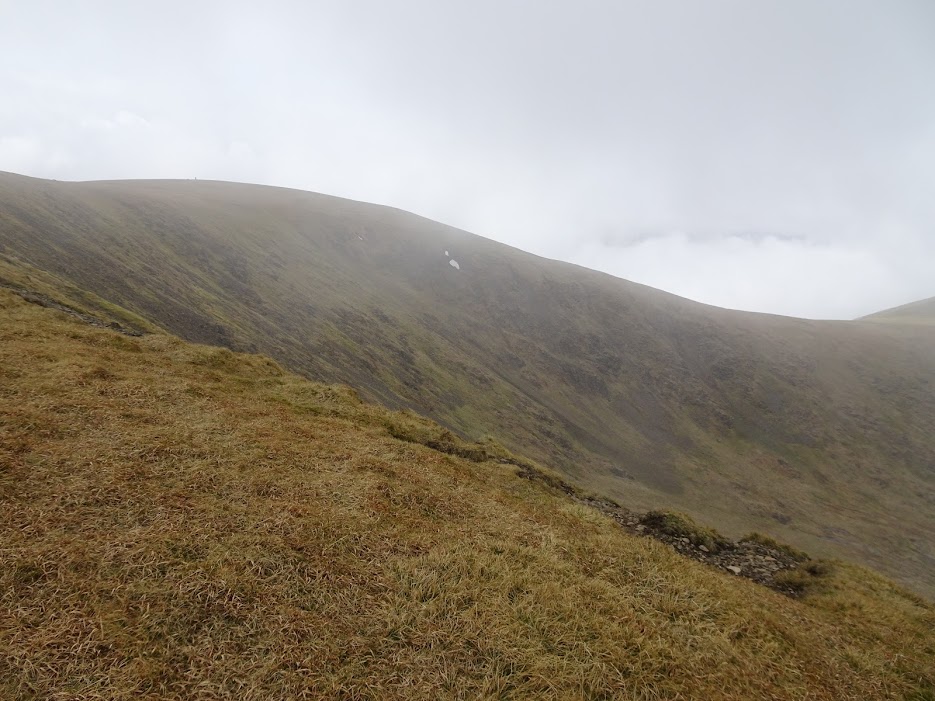 Summit appearing through the cloud. 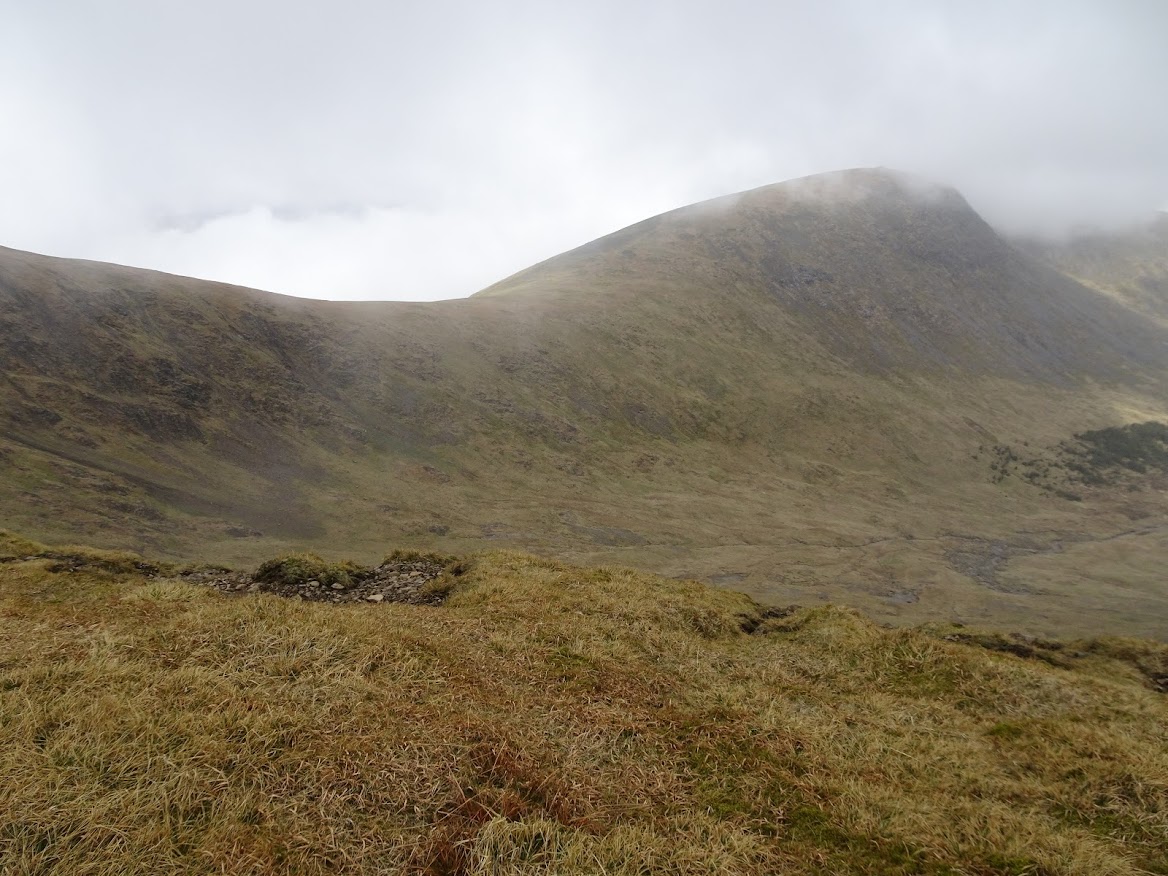 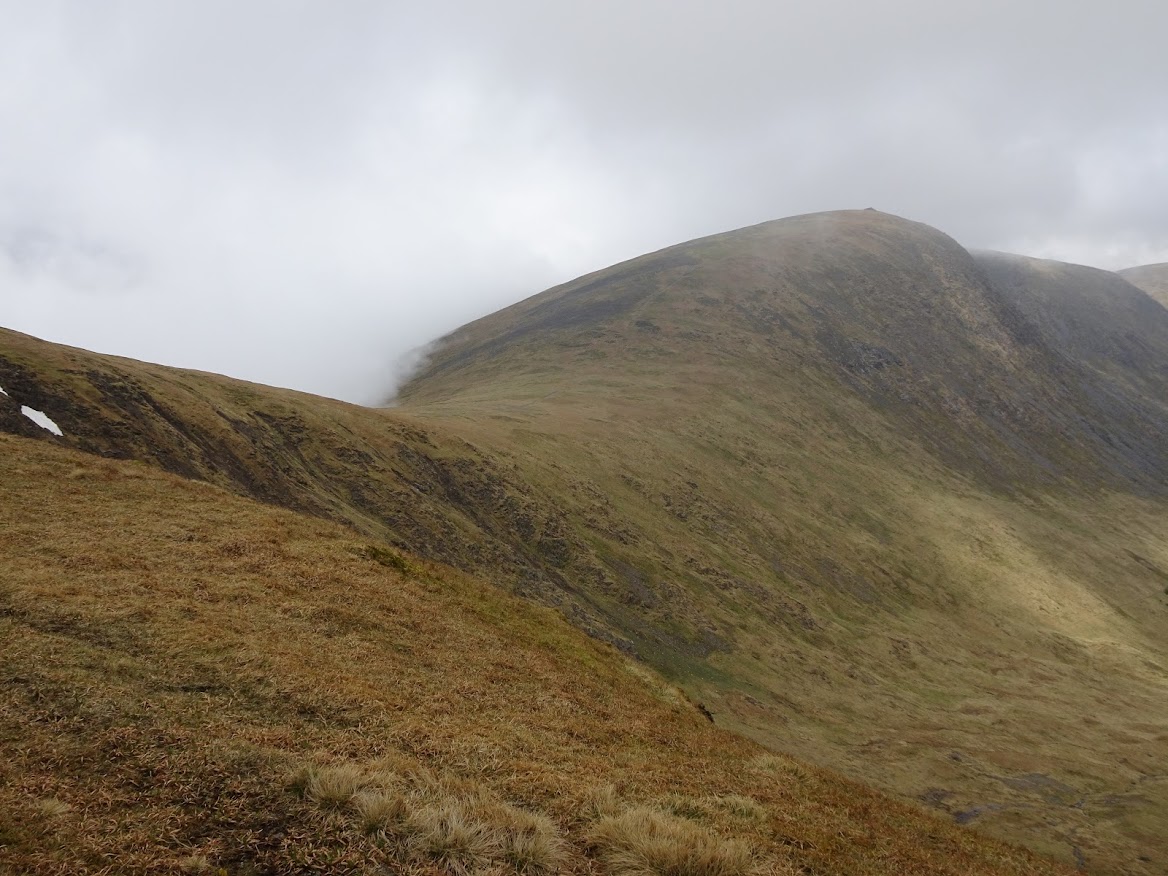 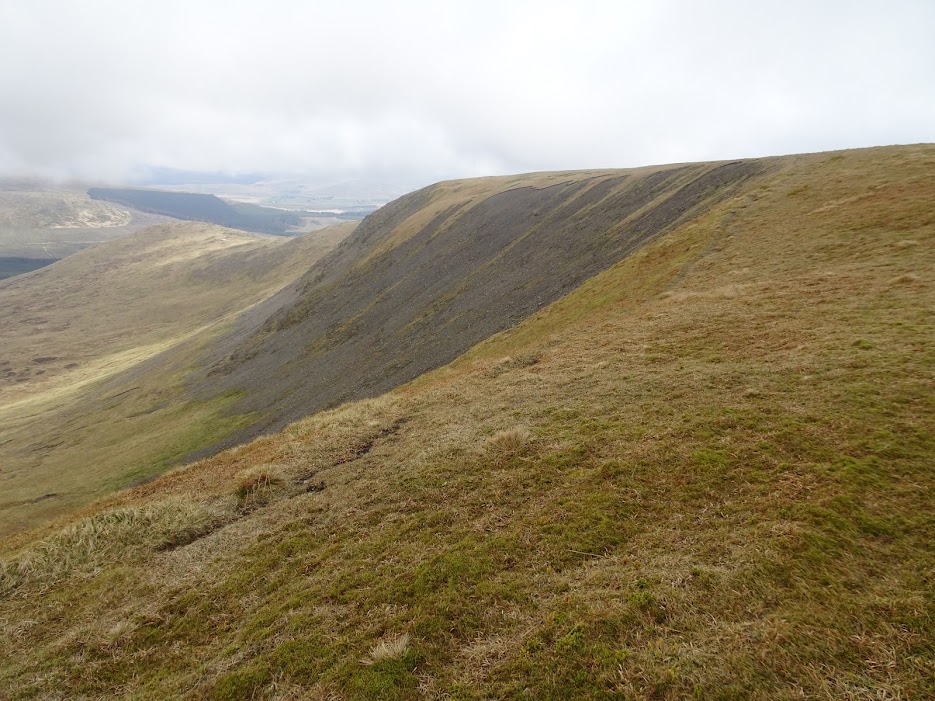 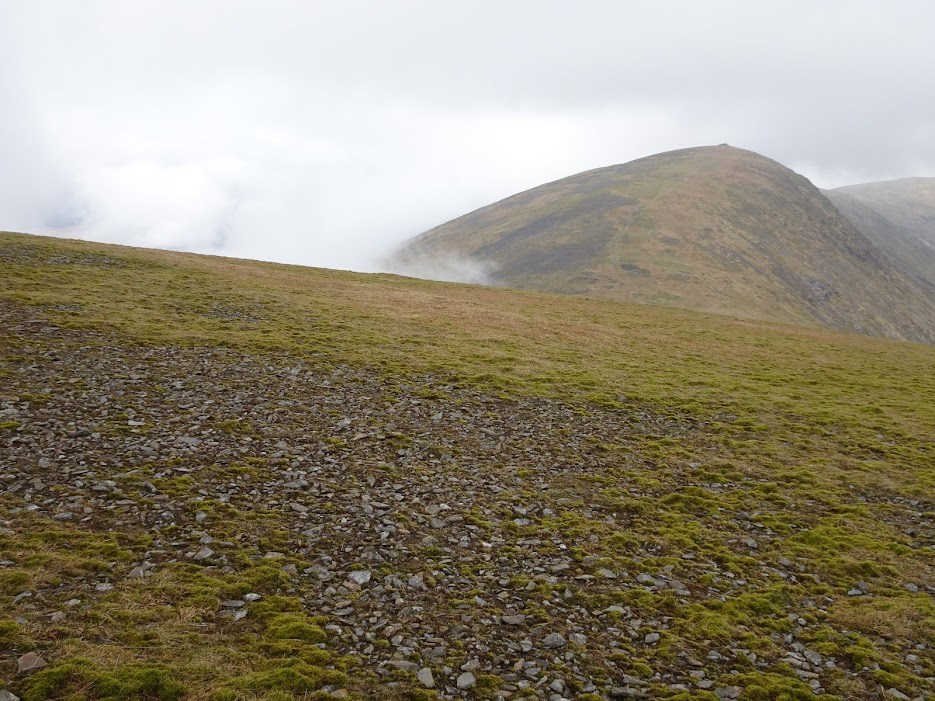 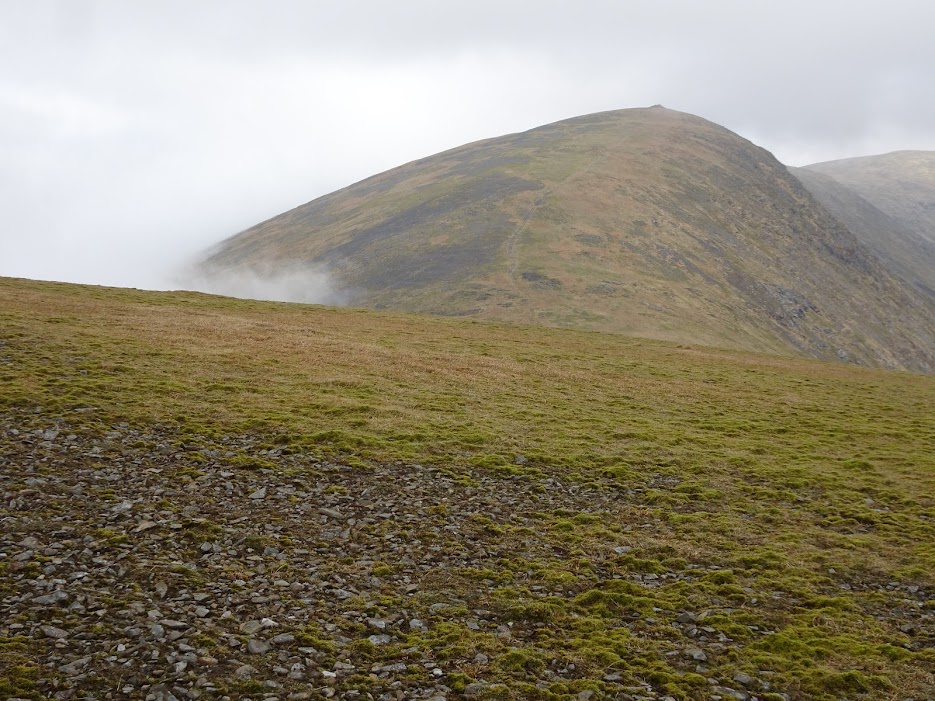 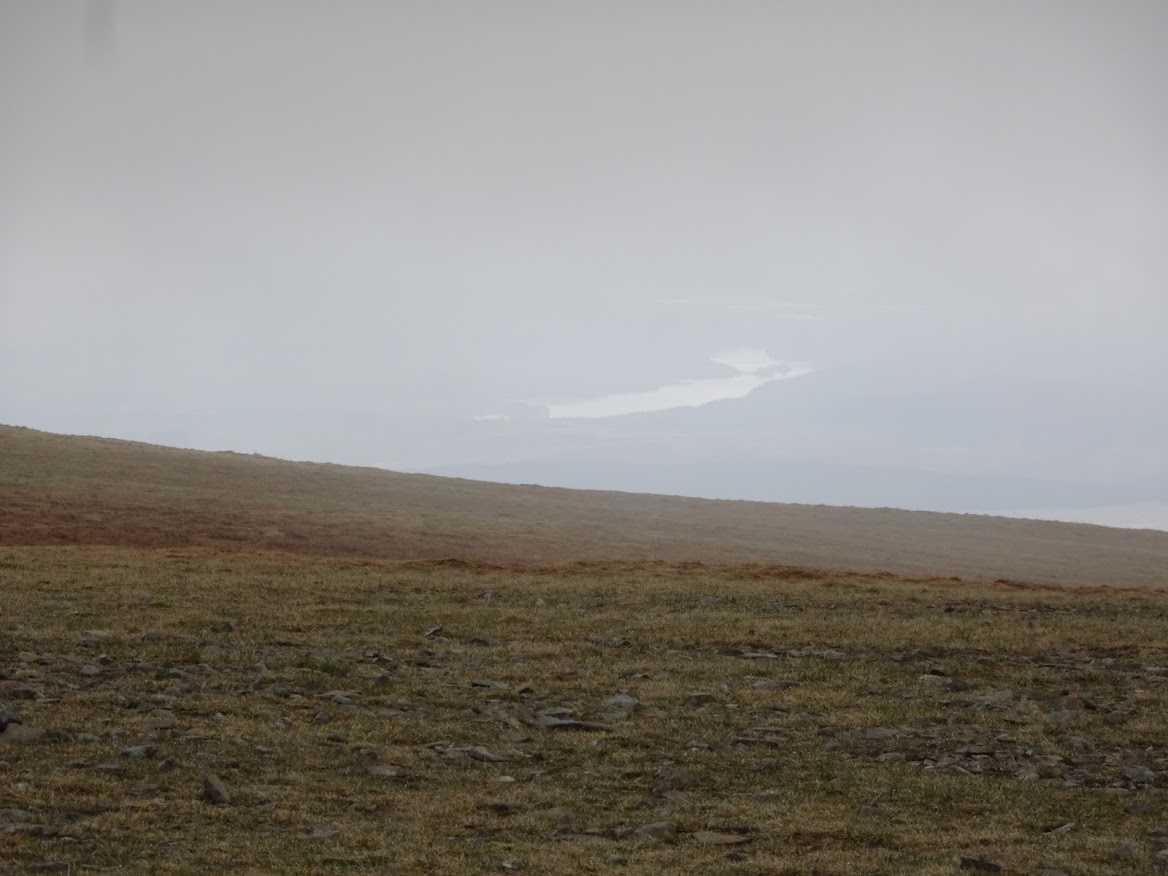 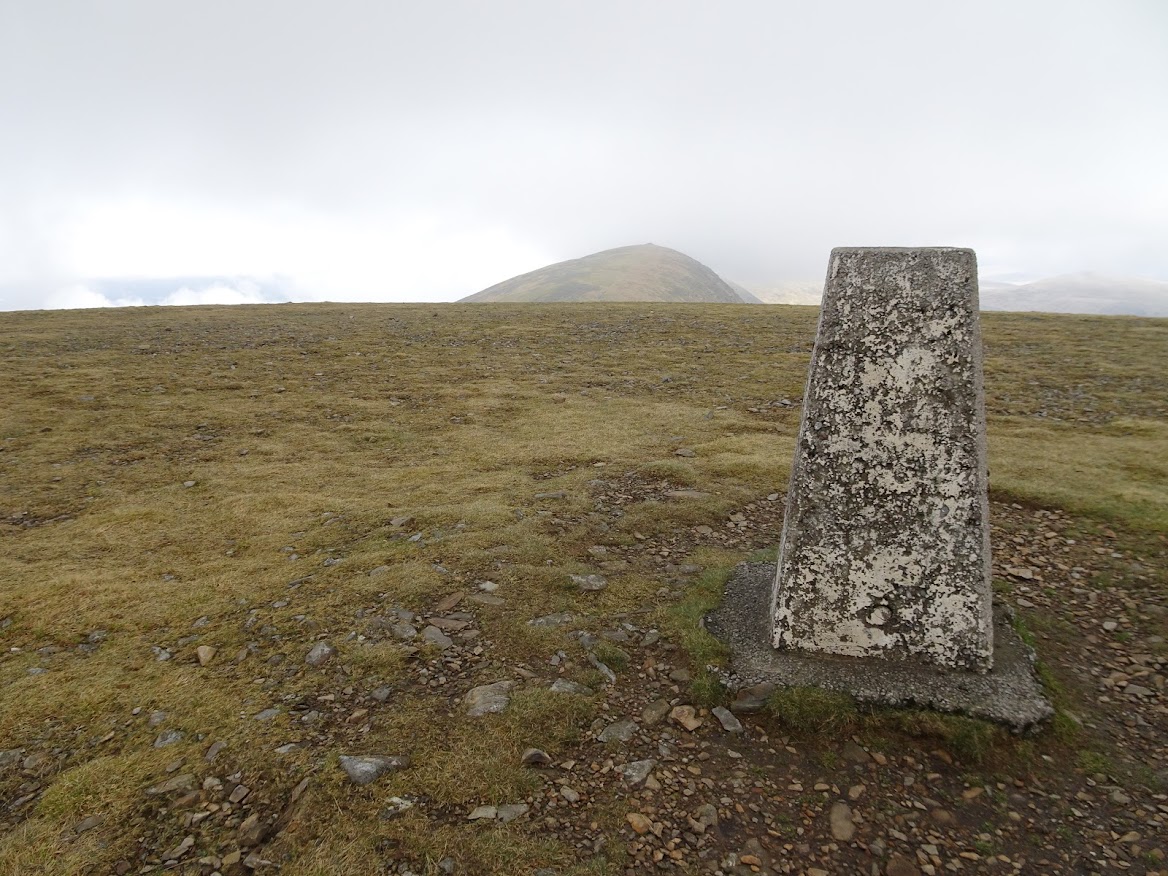 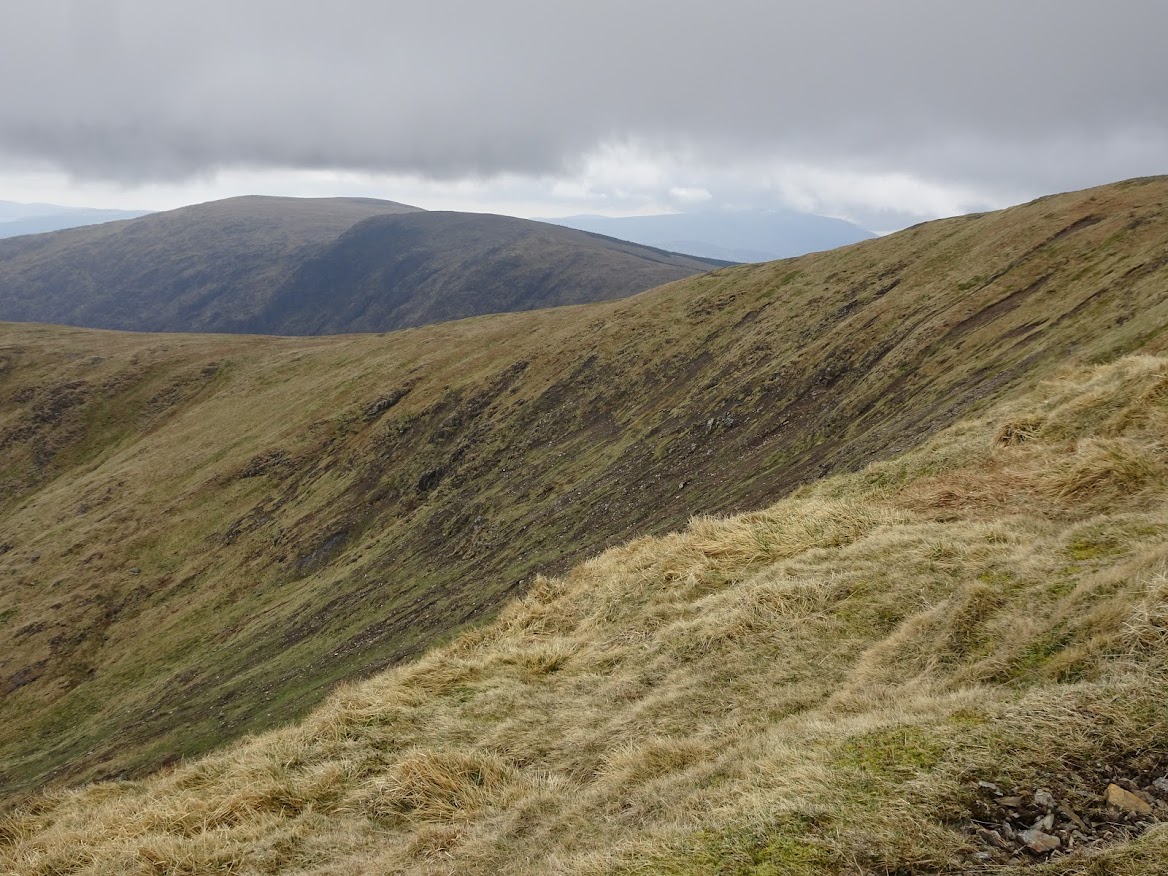 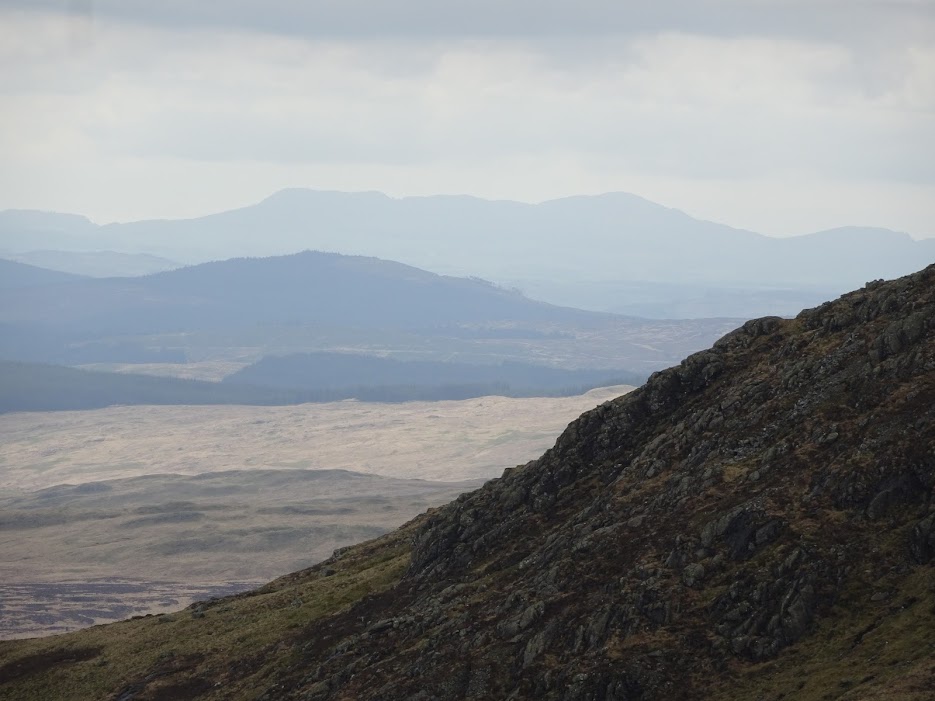 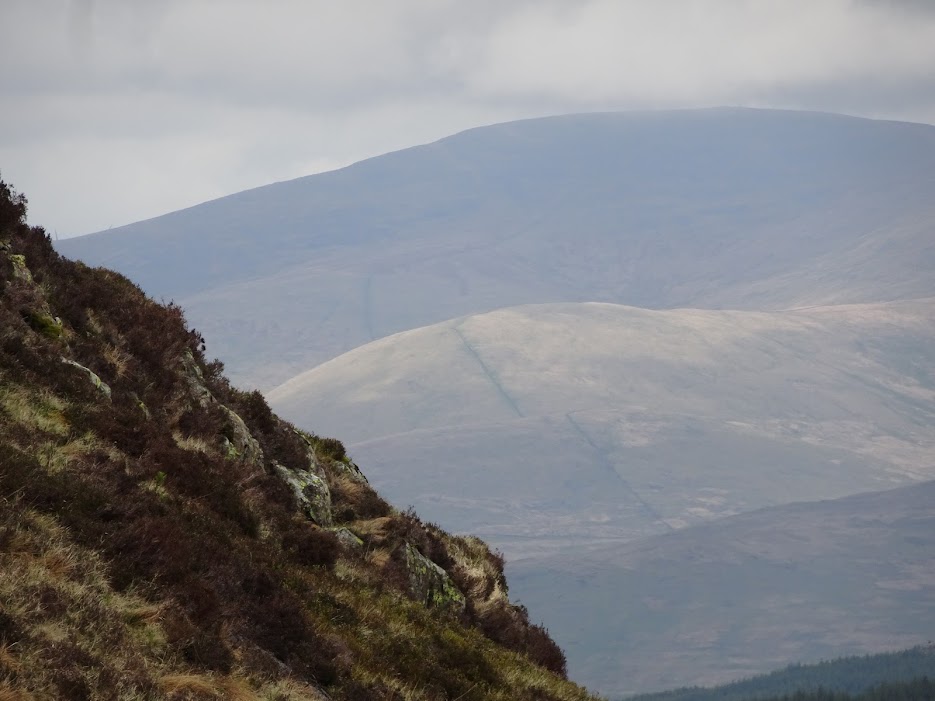