First report in a while.
An ever growing family, new job and other commitments meant i only managed one Munro last year and it wasn't even a new one - a repeat of Lochnagar for the umpteenth time, not that it was a hassle as it's a fine walk.

Changes were needed so with a less stressful and time consuming job and a very understanding wife i'm back. Thats now five new Munros this year and two new Corbetts - FTF

Beinn Eighe was on the cards for this May day holiday, my dad said do this one in fine weather as the views are awesome so with a decent weather forecast it was marker penned in.

I love the romance of the Northwest Highlands, Applecross, Altnaharra, Coulags, Achnashellach, Inverpolly, Plockton, Shieldaig, Incheril the list goes on. Long drive for the day but who minds a long drive when the destination is TORRIDON. The place that sends the anxious, excited shiver down every hillwalkers body when you mention the name Torridon. Only the second visit for me but boy was i lucky. 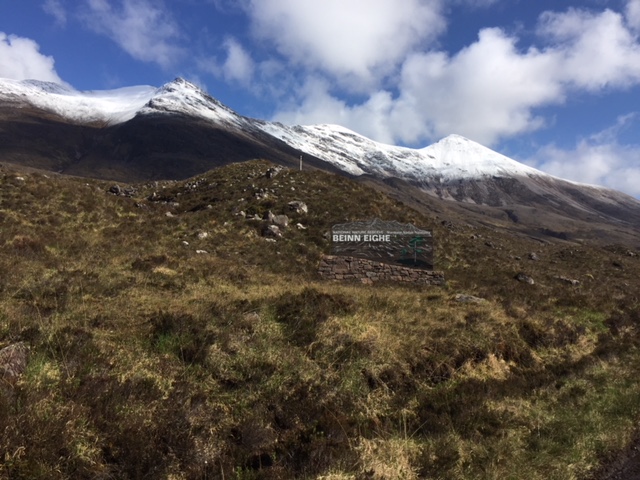 Parked the car at the Coire Mhic Fhearchair car park and walked the 2km along to the start point on the Coire an Laoigh path. Great views to the profile of Battleship Mountain Liathach. Start of the Coire an Laoigh path I was feeling the heat going up the path and the amount of snow up top made me wonder if i should have had the axe and crampons with me. Well i didn't so nothing i could do but carry on and turn back if it was not safe. Fine path leads up to the corrie by which time i had stopped a few times for air and substance. The dogs were skelping on and kept coming back to see what the hold up was Approaching the corrie and the snowline

I made the snow line and met a young lad coming down, he was only doing Spidean Coire nan Clach today and it was an up and back route for him. The snow was about 5-6 inches and was that fresh sludgy stuff that was slippy in places. Snow getting deeper in places Fine ridge over the eastern peaks of Beinn Eighe The final climb up to the ordinance survey trig was tough in the snow but we made it. We didn't stop and a piece was promised to the dogs on our return to the trig from the perched summit point of Spidean Coire nan Clach. We tiptoe'd over to the summit, only one bad step in the snow. Cracking views over to the Black Carls and the Eastern summits of Beinn Eighe. What a beauty she is. Back at the trig point sandwiches, hot coffee and tit bits were had. Here we were overtaken by a young couple who made short work of the ascents in the snow - jealous i was of their fitness We set off along the ridge heading for the bealach, passed a good few walkers that were happy to stop and chat. Always nice to hear others stories. We eventually made the bealach where we continued on up the rocky ascent. Zeroing in on Ruadh-Stac Mor This soon flattens out and the final slopes were in around 6 inches of snow leading to a fine summit and viewpoint to the Fisherfield and Letterewe Forrests and the mighty Slioch. To the south the triple buttress came into view and then the Achnashellach and Coulags hills. Amazing. Also it was hard to miss the battleship mountain of Liathach. We stood and spoke to a nice couple from Kinross and their wee feisty dug Bella, she gave the springers a few nips over some food. She was a nice wee dog and i love seeing Lochy getting owned cause he can be a wee sh*te at times Summit dogs - we laid a stone for our pal Tarsuinn whom we were thinking about today and my pal Eric. We could see the Fisherfield Summit of Beinn Tarsuinn of which he was named. First views of the triple buttress

It was some chore to leave the summit but we did and headed back for the bealach and the drop down into the floor of Coire Mhic Fhearchair via the narrow scree gully. This was not as hard as i'd expected and we were soon negotiating the Glacial Eratic boulders and the sandstone terraces before finally making the path that runs along the side of Lochan Coire Mhic Fhearchair. I couldn't wait to get to the exit stream from the loch to get the best picture of the magnificent triple buttress. Boy did it impress - absolutely stunning and well worth the walk in itself, there was a few walkers that had walked up Glen Torridon just to see this magnificent rock feature. Took a few pics and we were on our way. Even with an iphone this pic is good

The walk out to Glen Torridon is a joy and the legs were feeling great and still are today. Considering my thighs were killing me for about a week after the two Mamores on the last Munros i did i am well pleased the legs held up, maybe i'm getting back into the swing of this hill walking malarkey and i can start thinking about a compleation in the next couple of years............or decades???

Cheers Torridon, you didn't disappoint, heres to the next walk.
P.S. This one was for our friend Tarsuinn - a faithful hound to the end

Wonderful day although the snow sounded rather challenging but does look good in your photos. At least you managed more munros last year than I did

Sorry to hear about Tarsuinn (electricfly's four legged friend I assume) but a nice way to remember. Thanks

Hi Matt,
Good to see you're out in the mountains again and it looks like you had a grand day out on Beinn Eighe. great report.
I'll get in touch soon to see if we can get together w/c 19 May, we'll try and get you closer to the finishing post

Brilliant walk for a return

Glad to hear all's well, and a day with the dogs like this makes it all worthwhile. As you said 'for Tarsuinn'

Well done those spaniels and in the snow too! When my Tess did it (on much warmer day than you) I was told by someone coming down the ridge was no place for a dog, and there was no water up there... but she was fine as long as she got a fair share of my water to drink. Looks like that wouldn't have been a problem for you!

Congratulations on the expanding family! Beautiful photos of a stunning place, I reckon you stood in the same spots that I did 15 months ago to take these shots, but the snow gives your photos the edge

Great to see spaniels on the hills, however feisty they are