Lingmell was the last mountain around Wasdale and the penultimate trip out on Denise's catch up campaign, after today she has Red Pike, High Stile and High Crag above Buttermere to do, after that we're all set for the final two fells,
The Nab and our mutual finishing post Catstycam.

We wanted to get home in good time so Lingmell was an ideal Wainwright for a short trip, we were based in Whitehaven so it made sense to do it on the way home.

We used the N.T carpark at the head of Wastwater, It's handy being a member of the National Trust, what we've saved on car park fees this year up to now has just about paid for our annual membership

We were off at 09:00 heading for Lingmell, straight up the nose so we could take advantage of the views 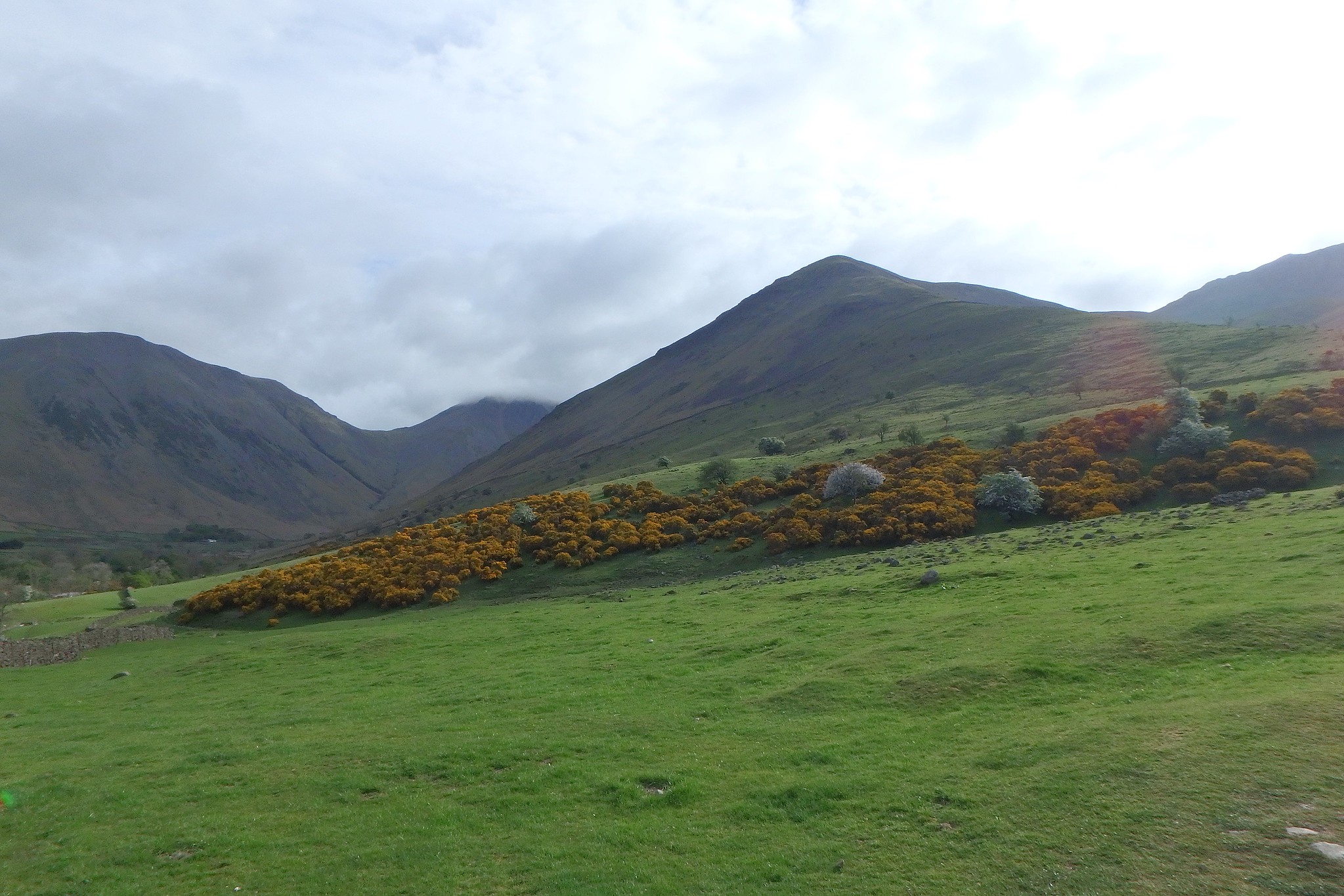 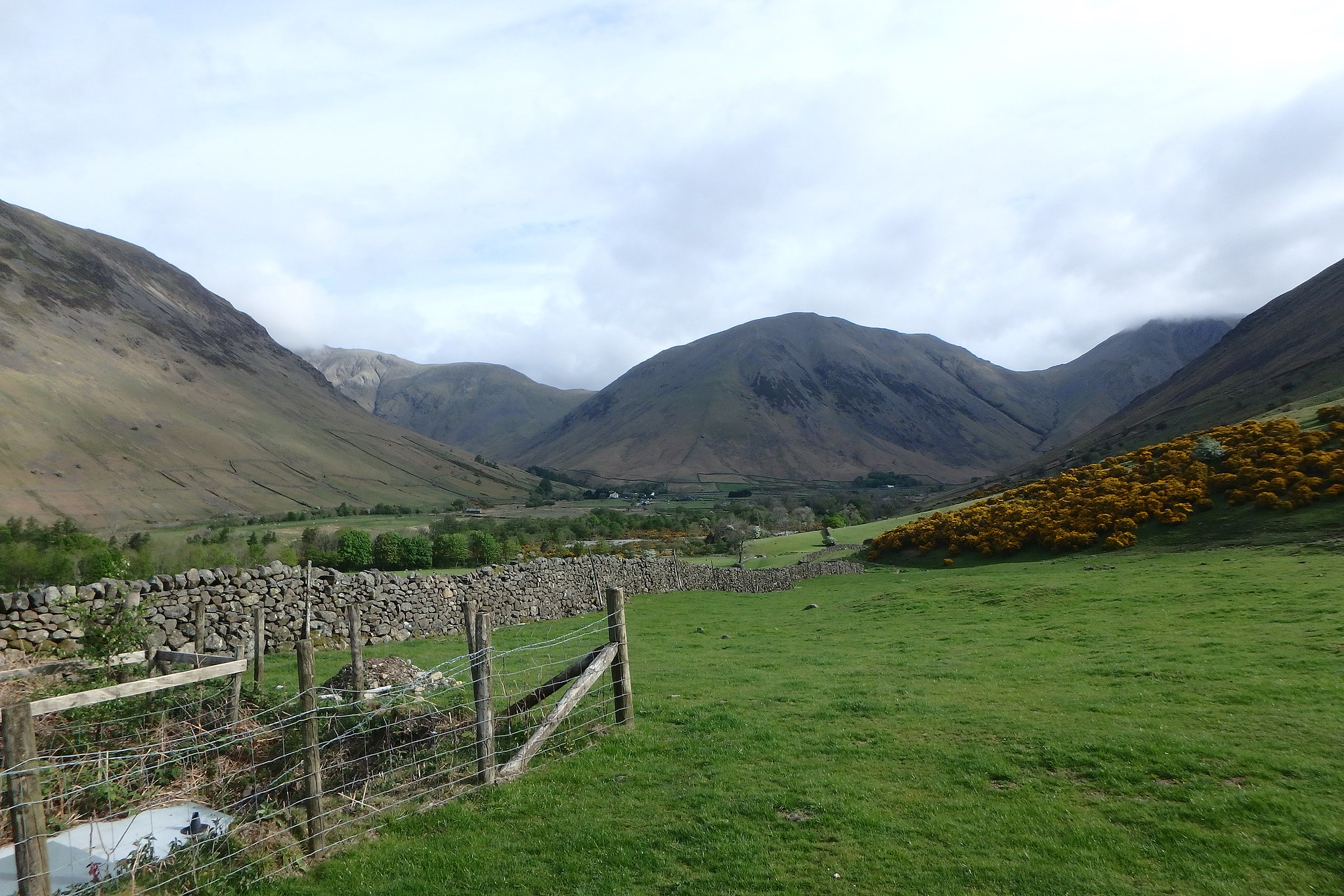 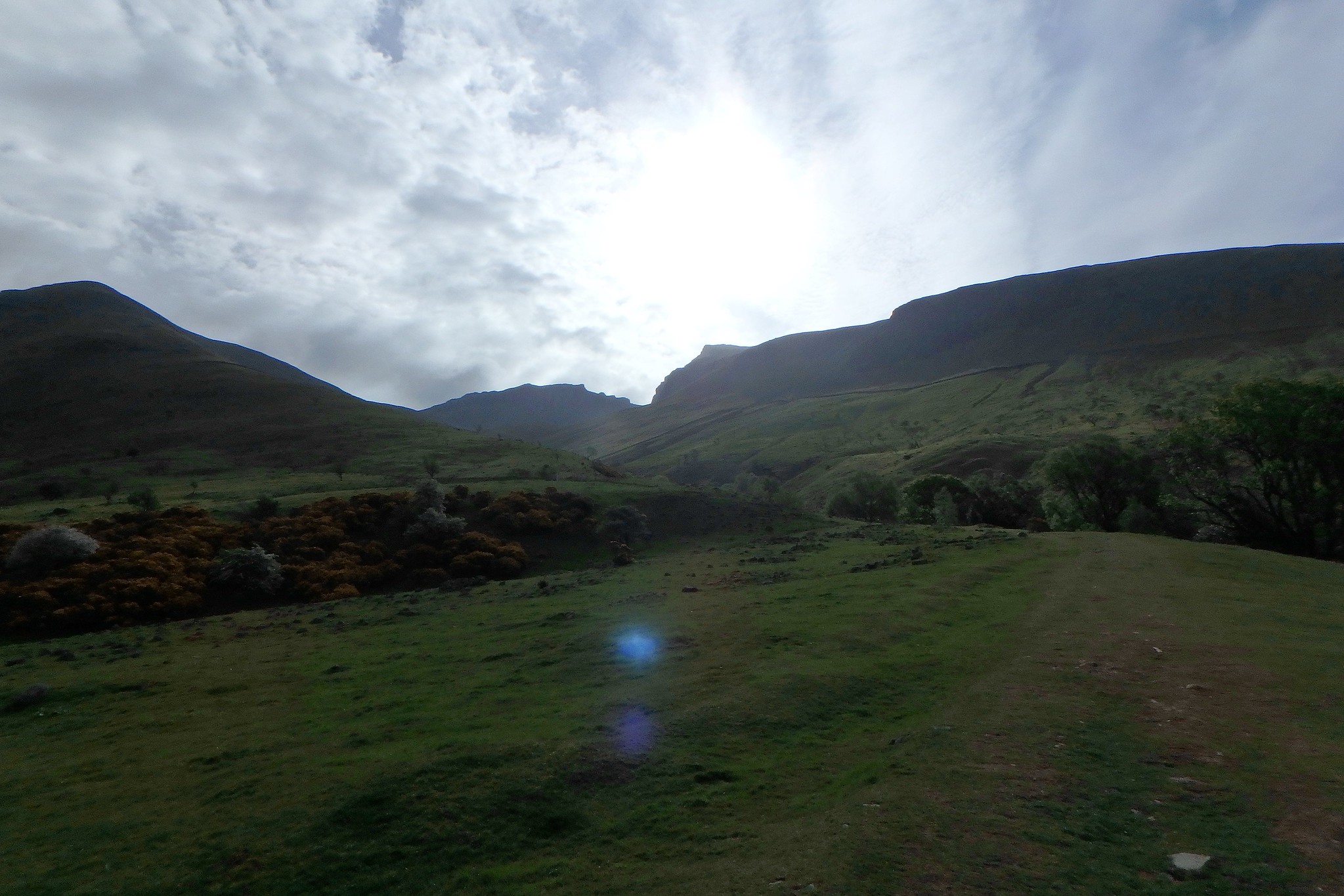 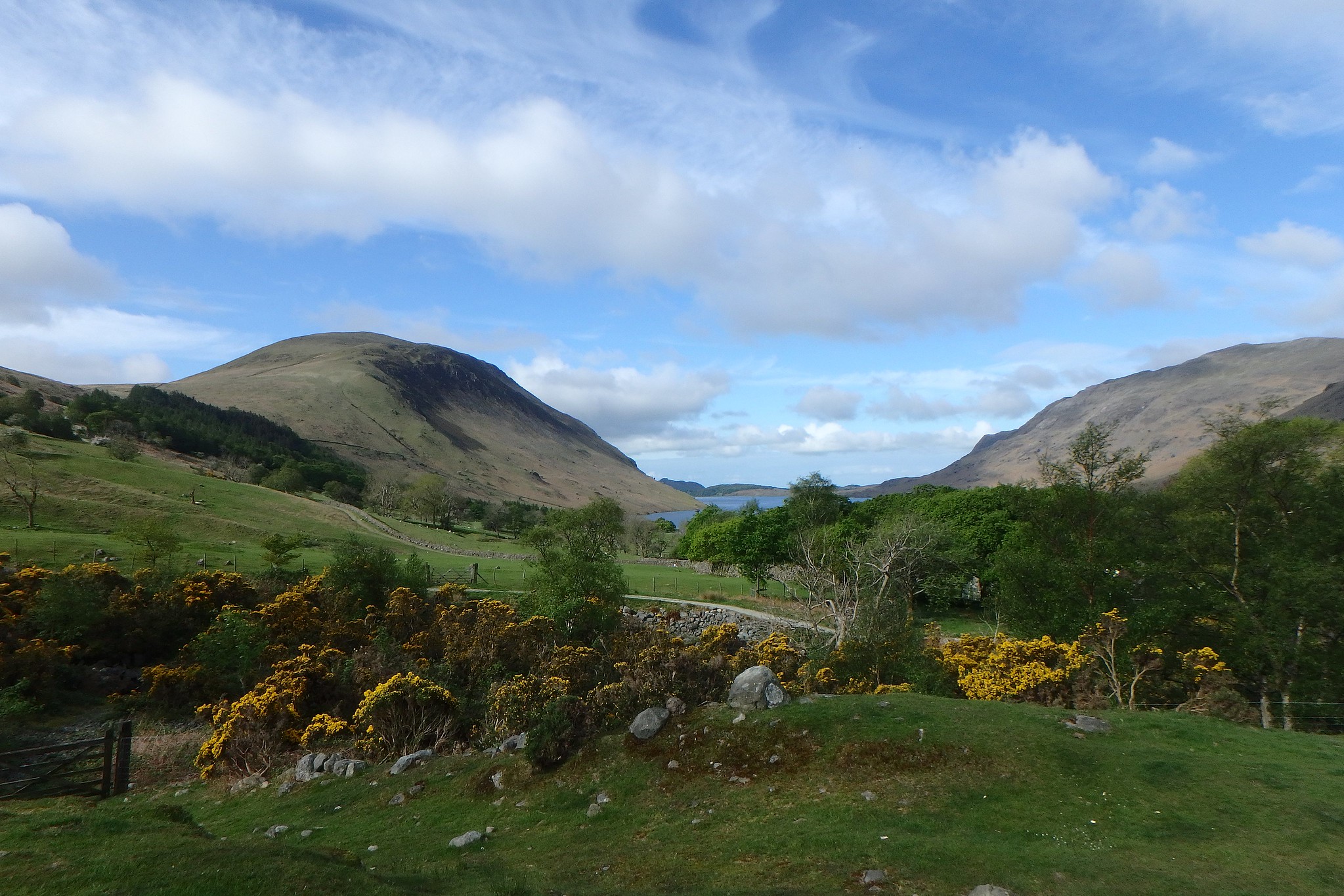 This ascent is not nearly as bad as it looks, there's a wall about half way up with a stile in it, that was to be our first rest break, once there we knew that not much further up it levels off and the hard work was done, we started our plod up, it seemed no time at all when we reached the stile

Views from the stile 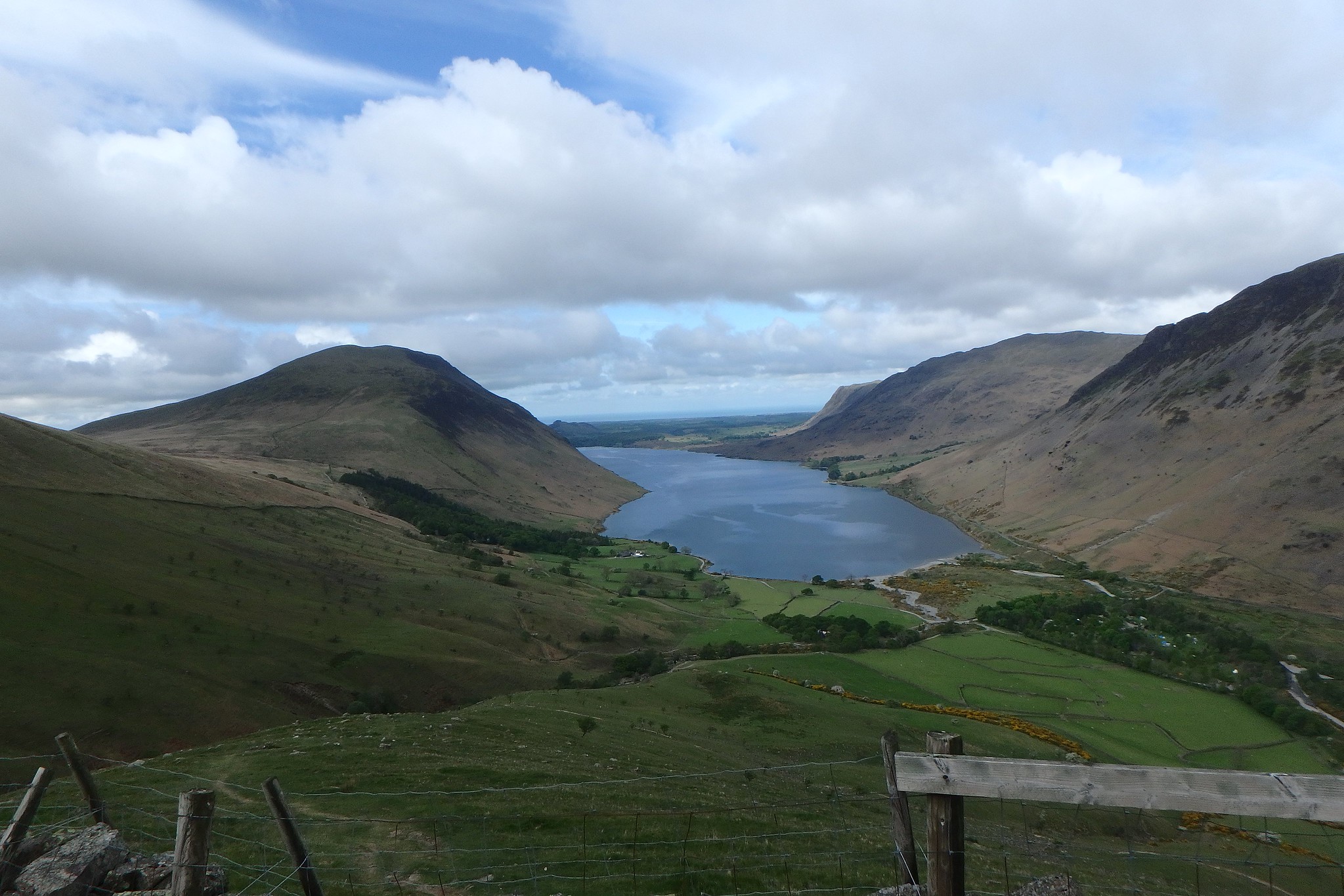 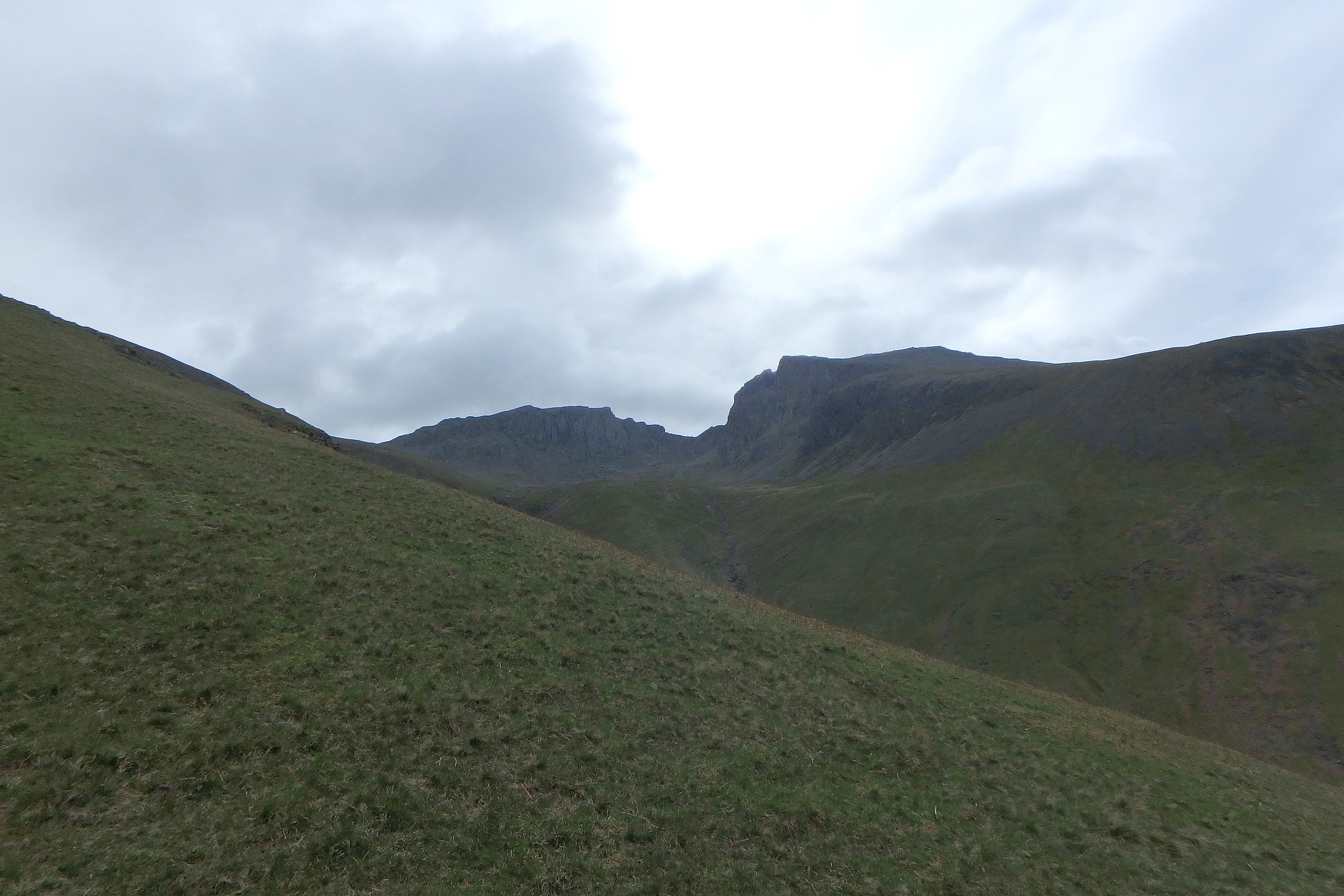 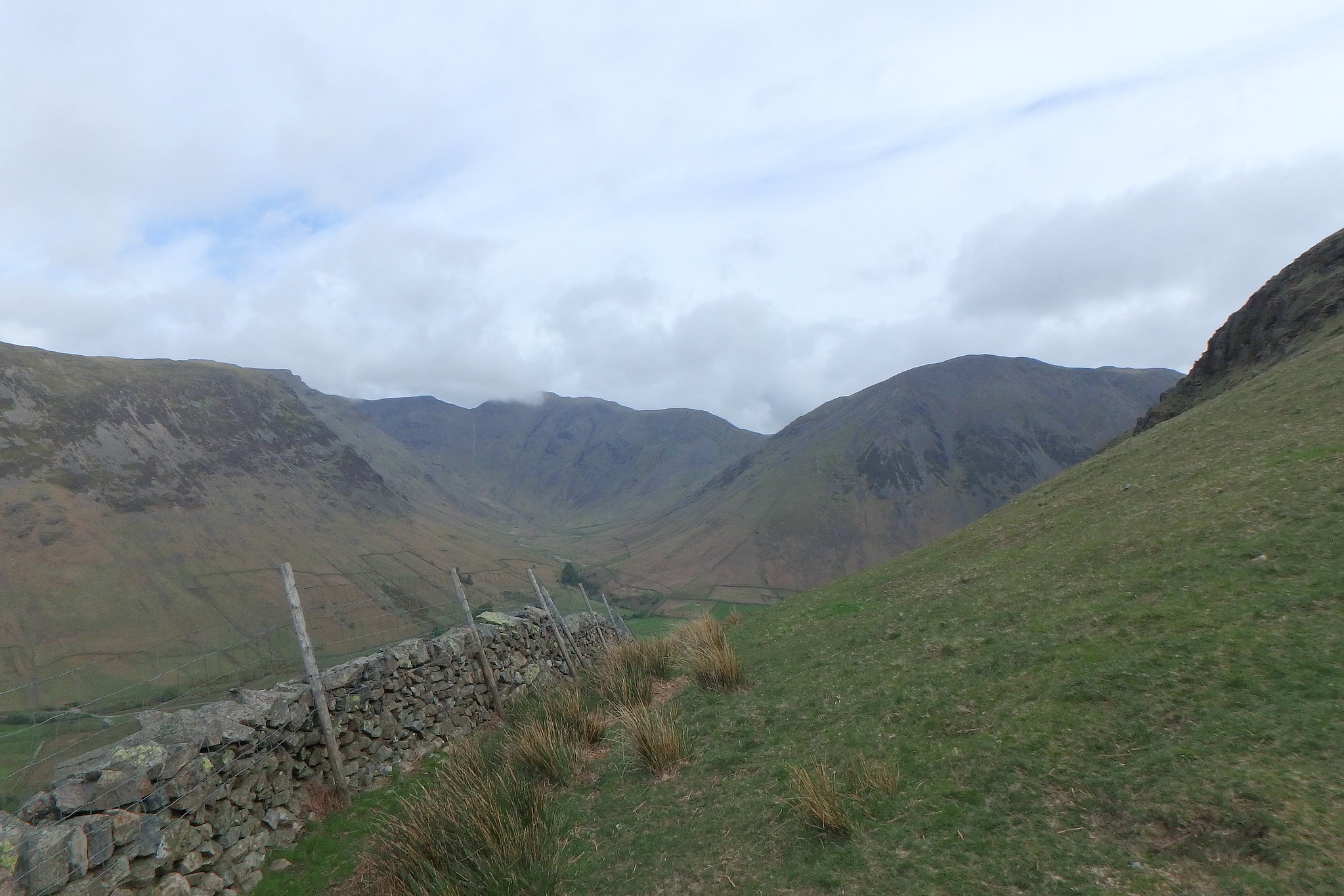 We had our rest then carried on to the rocky ground higher up. The path zig zags through the scree to make the going easier, once above this it levels off, the going is much easier and you get the first view of Goat Crags just below Lingmells summit which is all very uplifting after a quite sustained climb.

The path becomes a grassy track, on a warm summers day it would be nice to stop here, sit down and relax looking at the view down to Wastwater 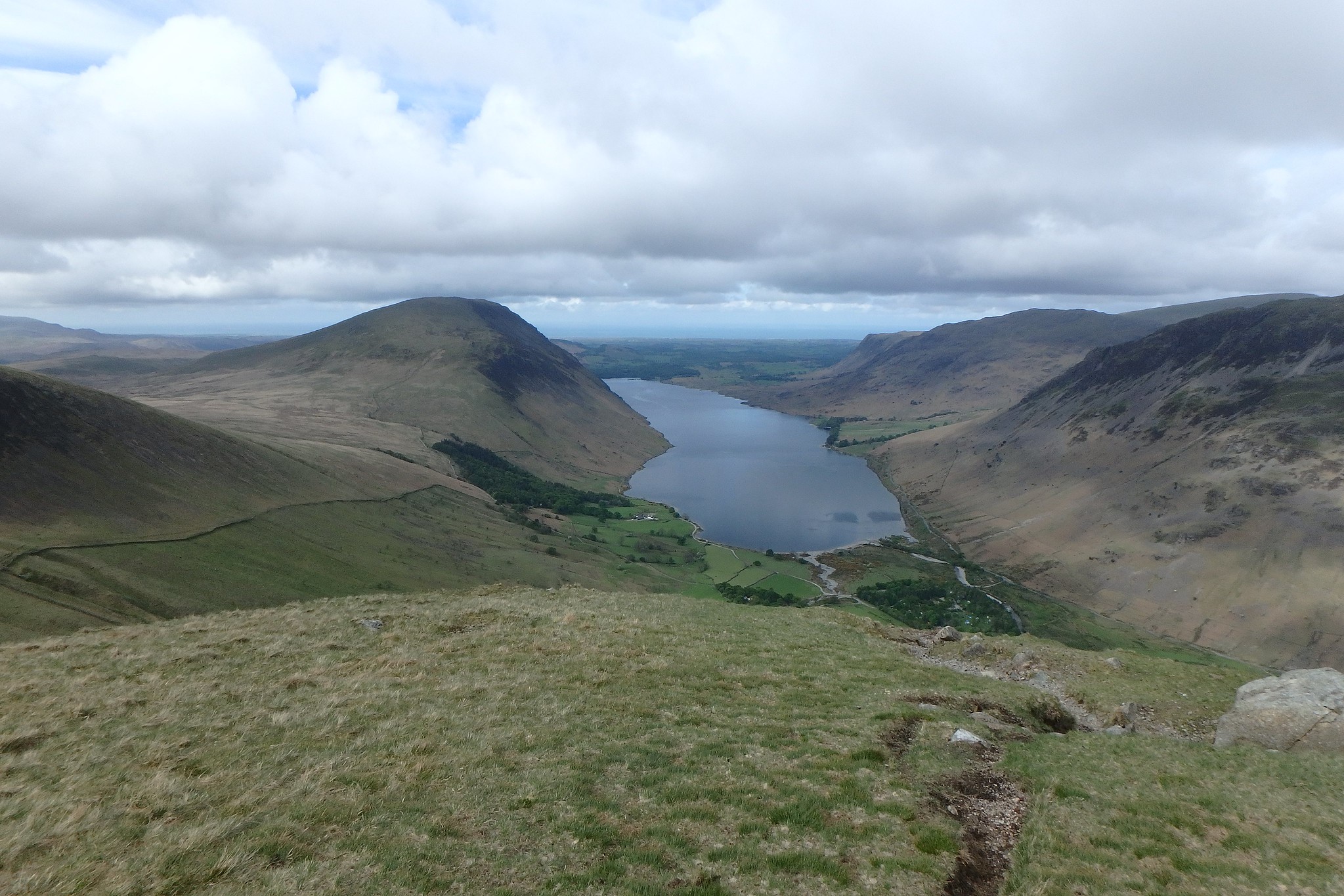 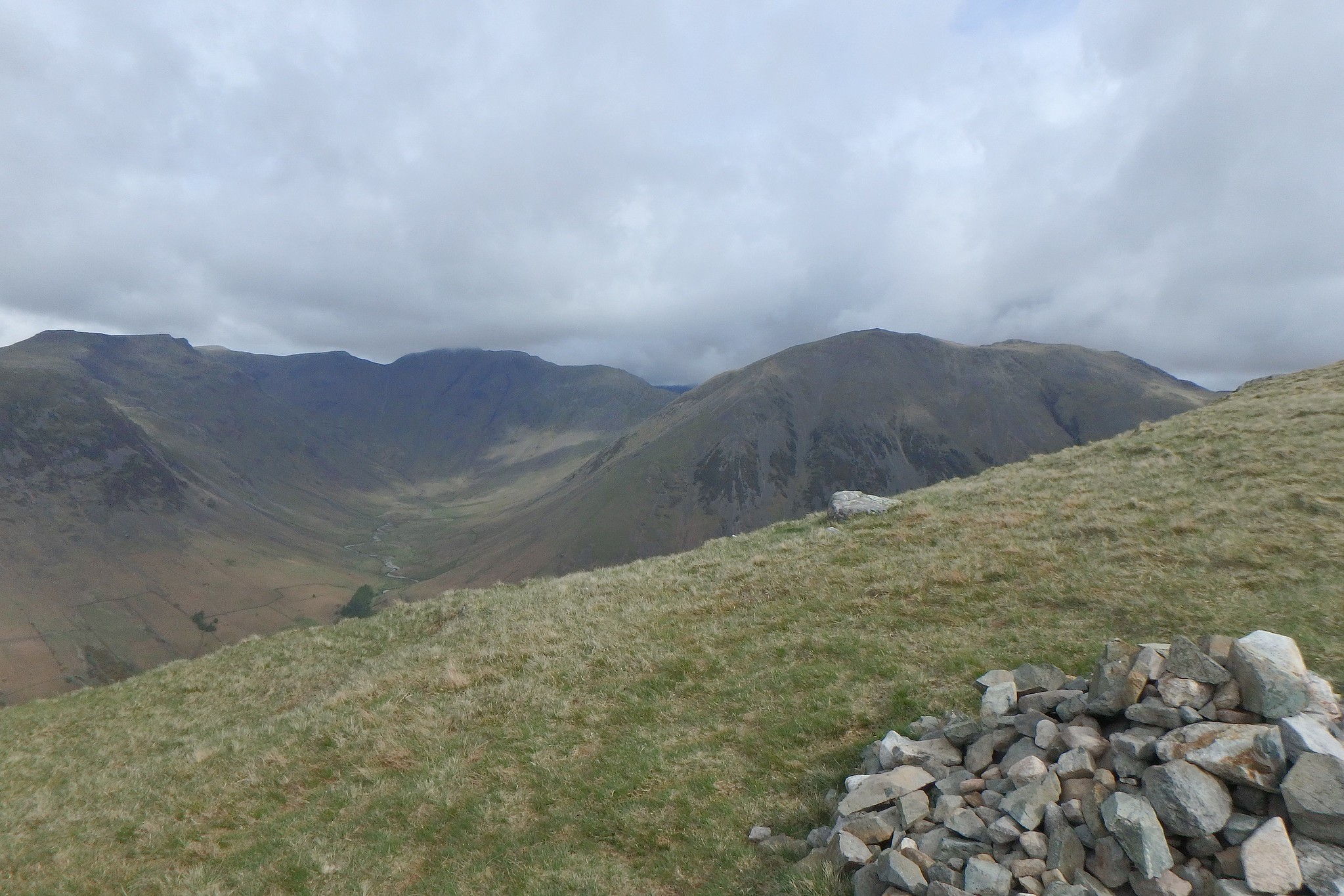 and the crags on the Scafells. 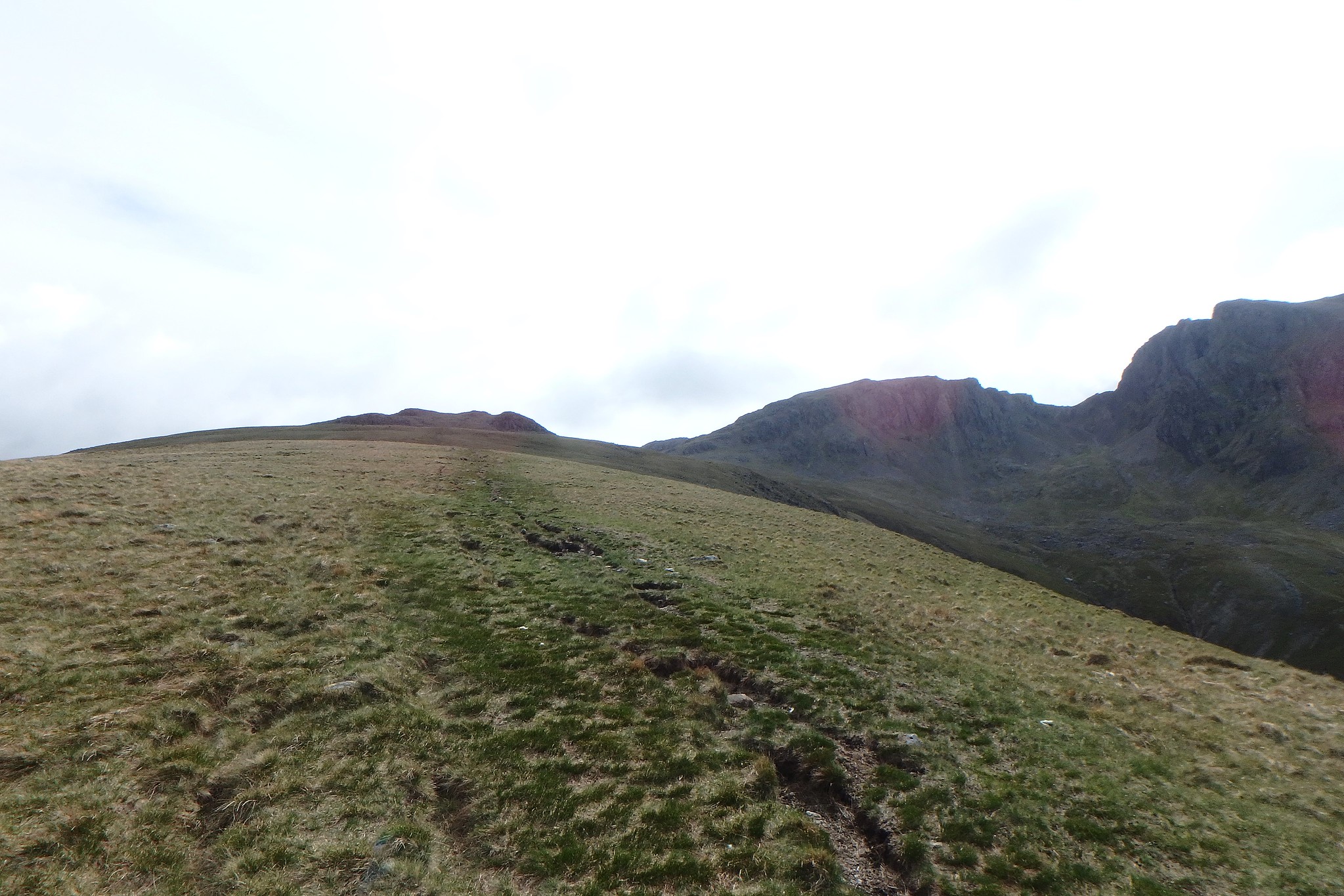 I often think about the early pioneers who saw all this before the paths were established and any other changes to the landscape us humans have made, I bet it felt wild and unknown.

It's a steady walk to the summit, steepening for the last 30 or 40 metres or so. As you approach the summit you're met with the most amazing view, Lingmell Crag and the sudden drop down to Piers Gill, wild exposure, what a sensation, we spent ages just looking, the Scafells looking magnificent (except the path), Great Gable, Styhead etc etc, it's a stunning place to be. 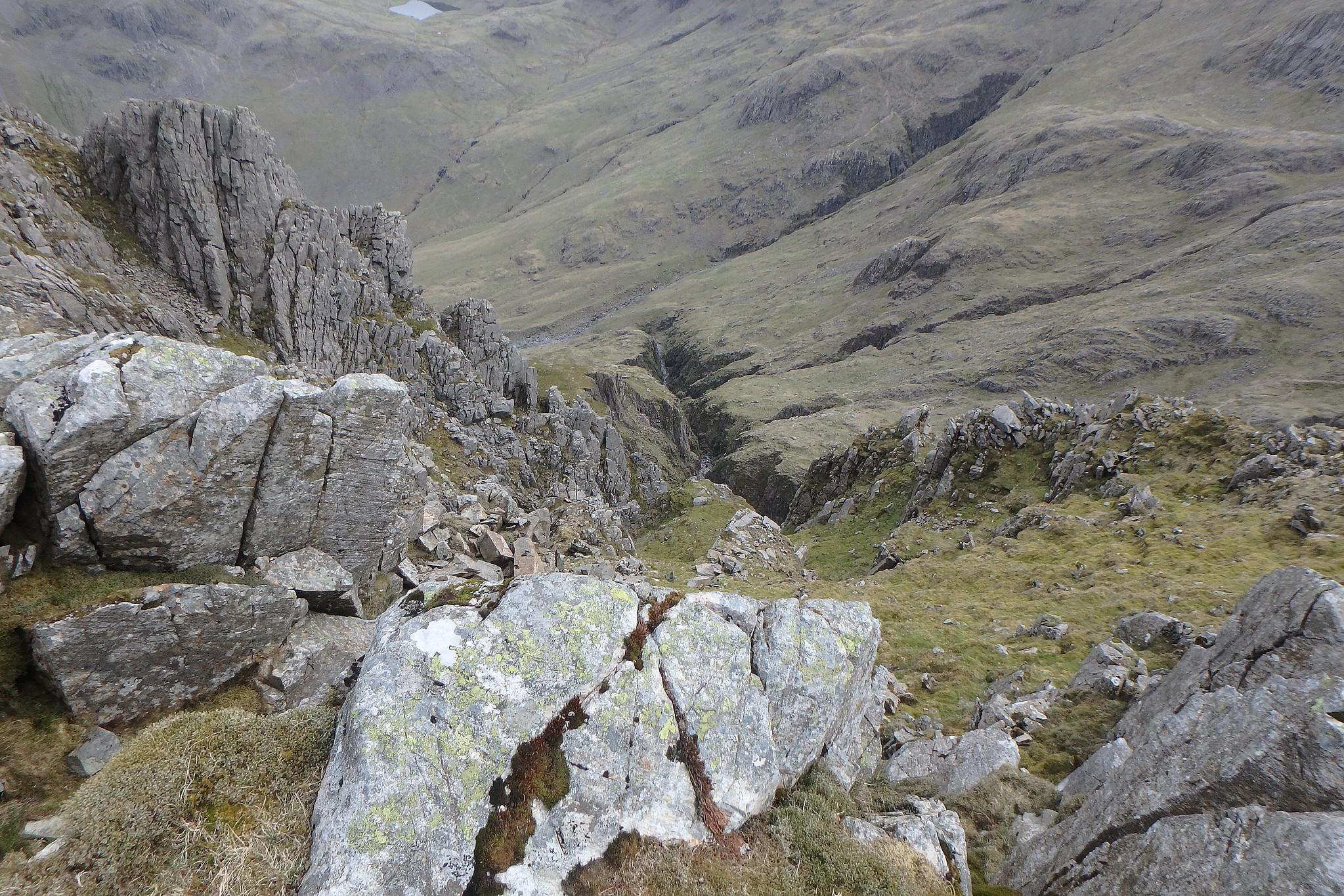 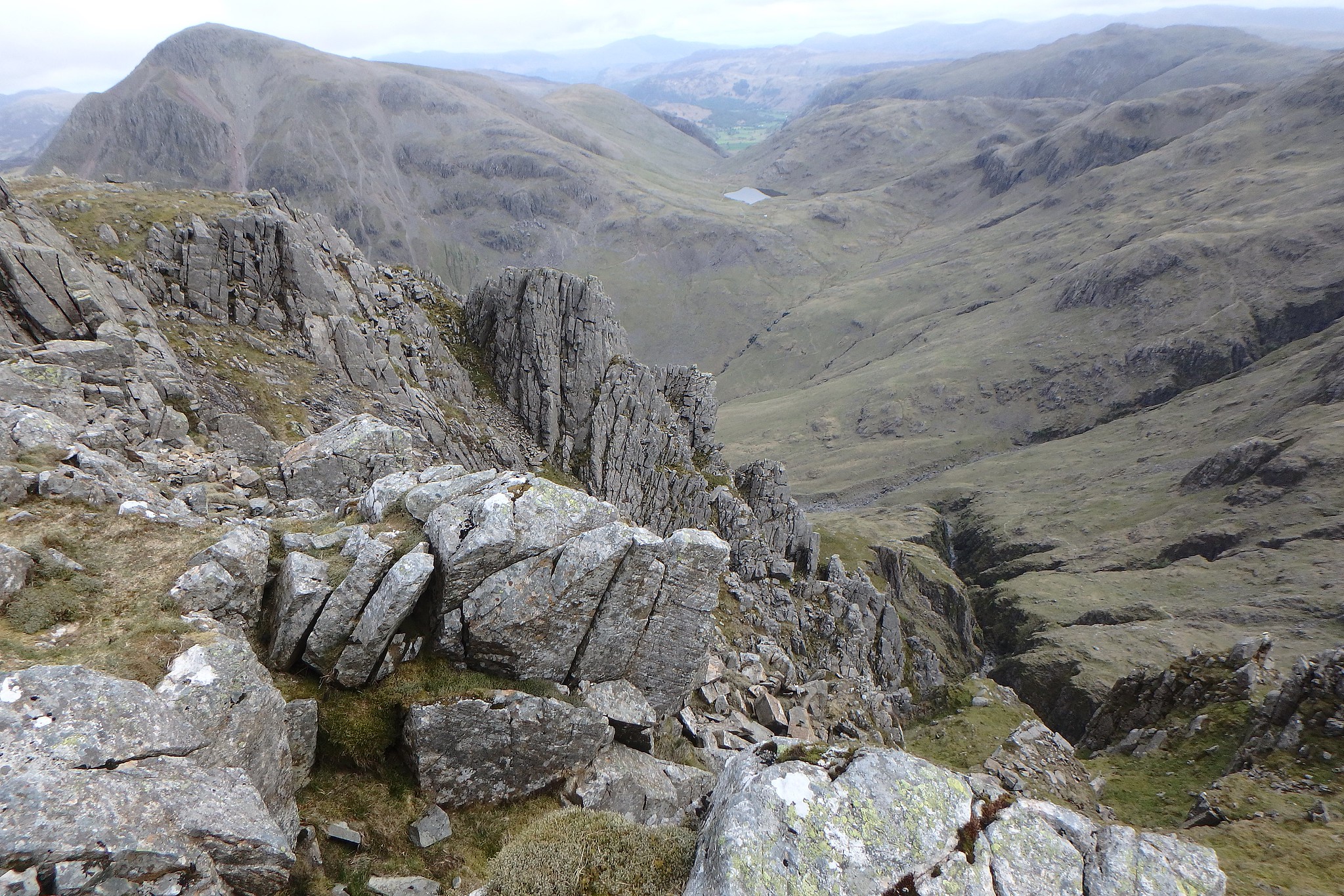 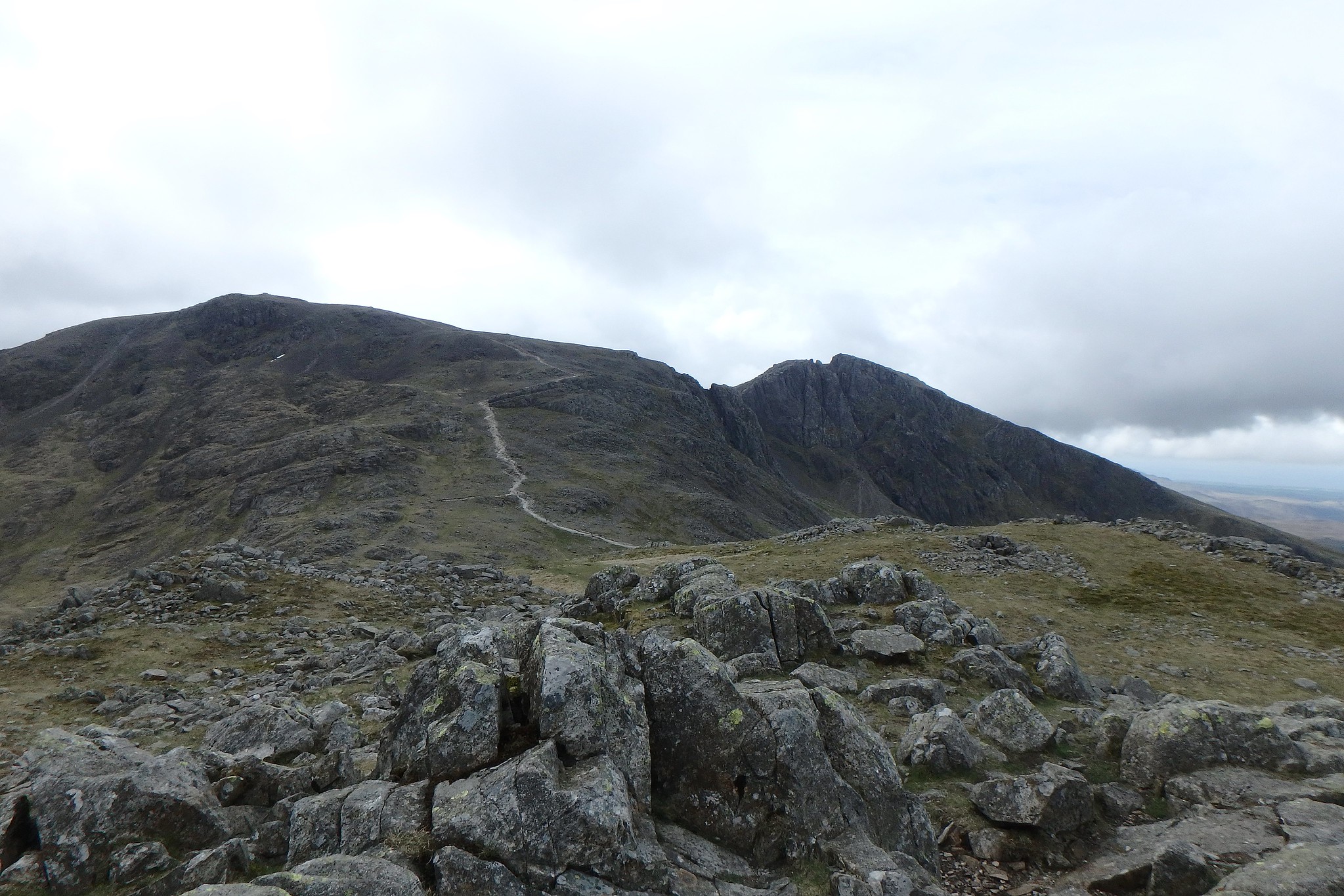 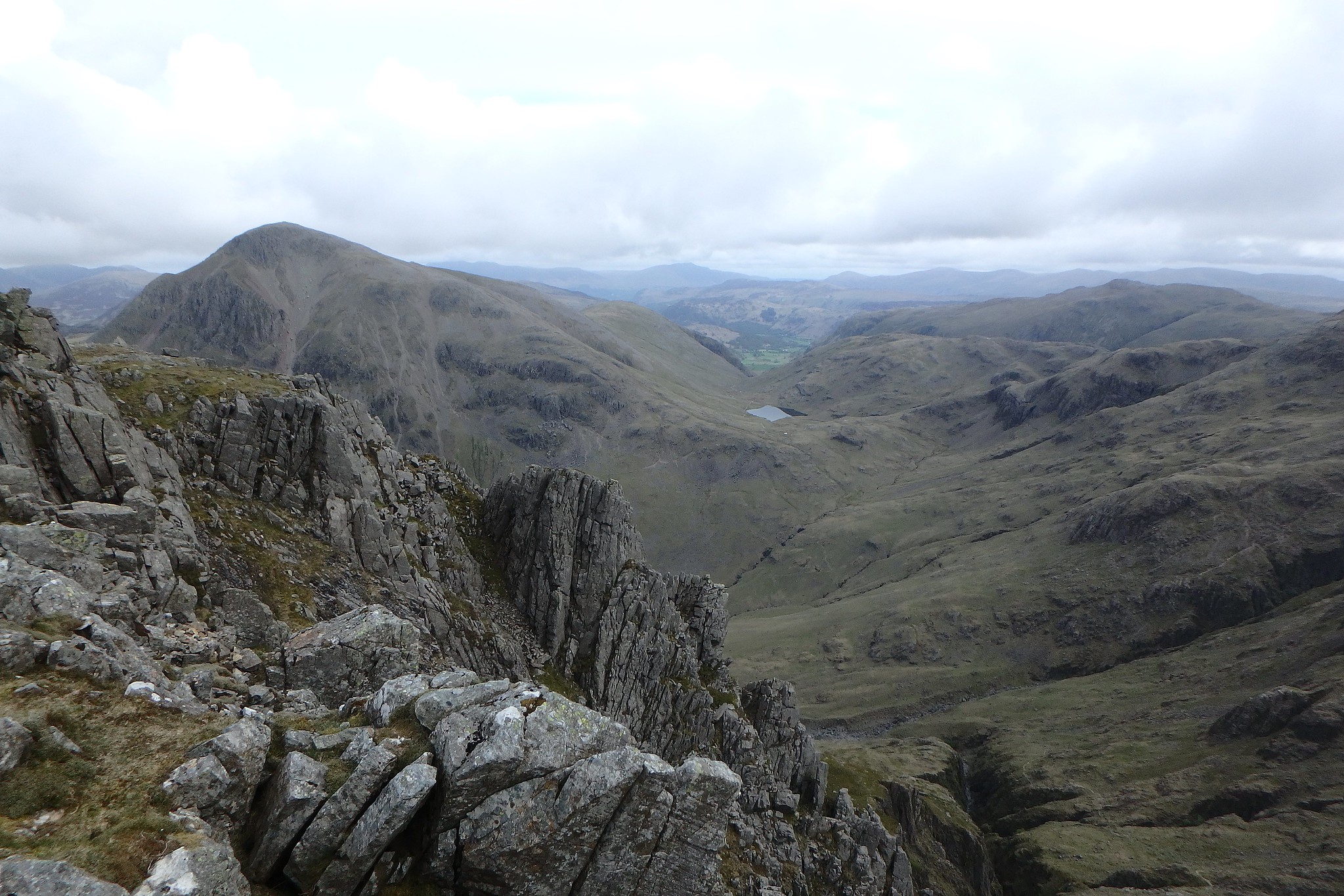 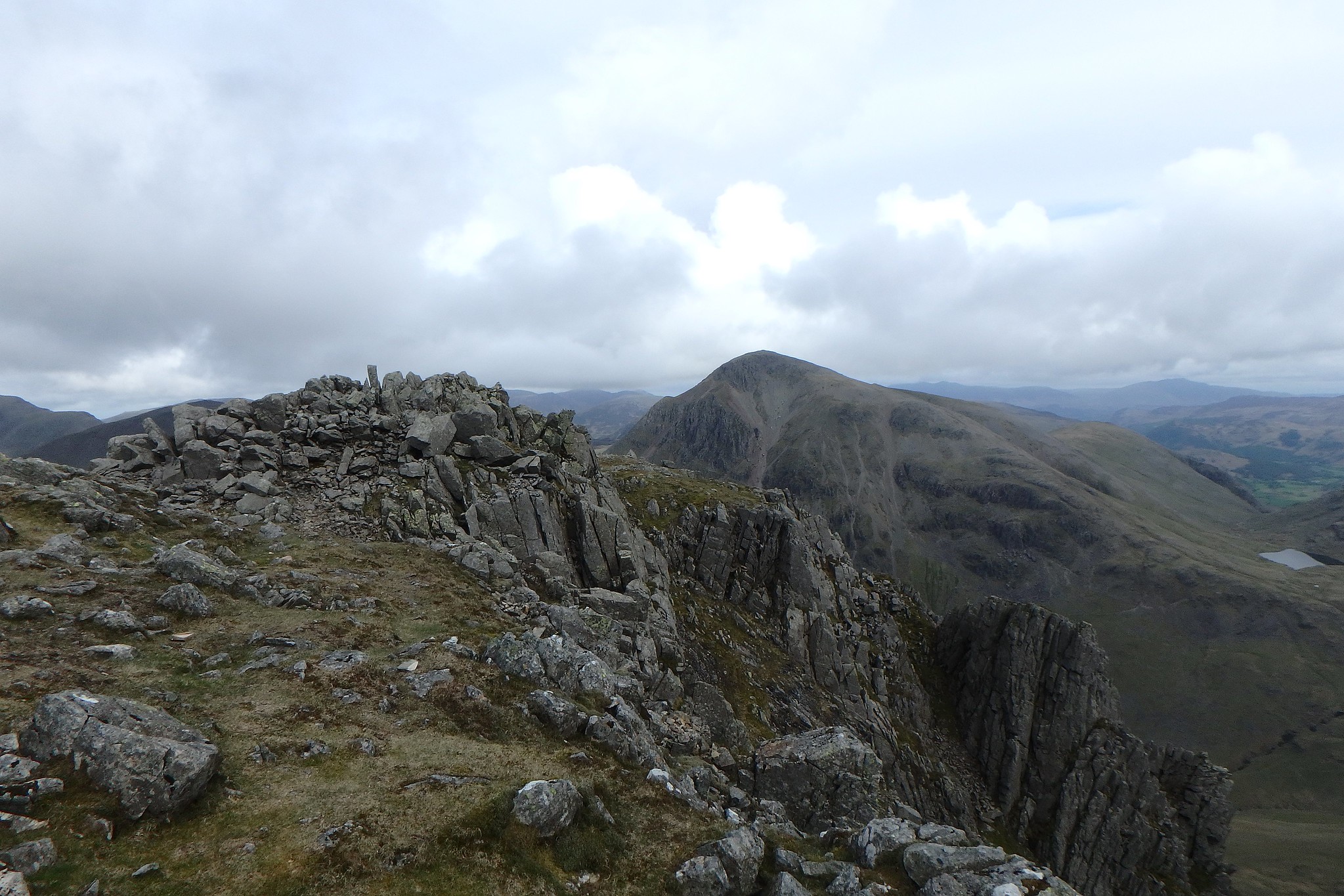 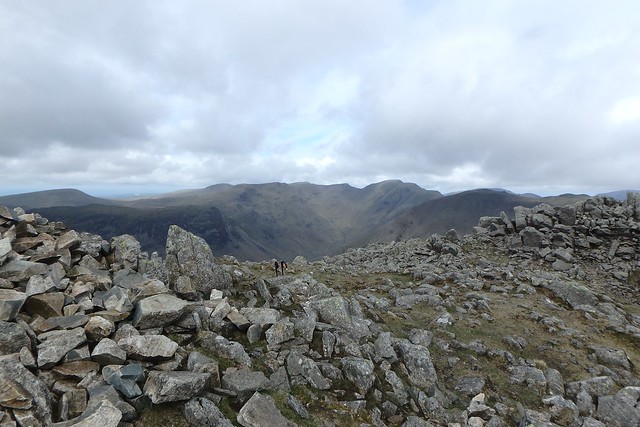 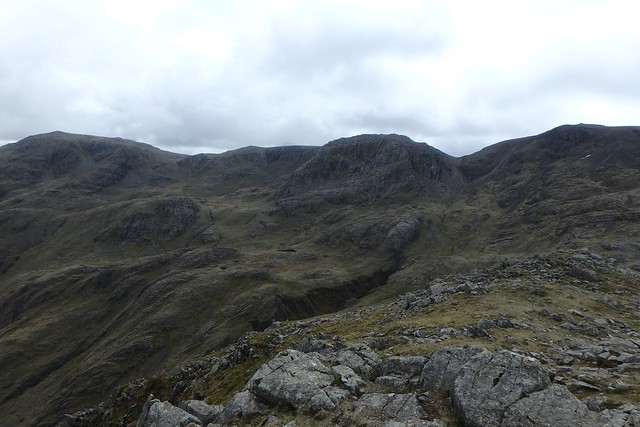 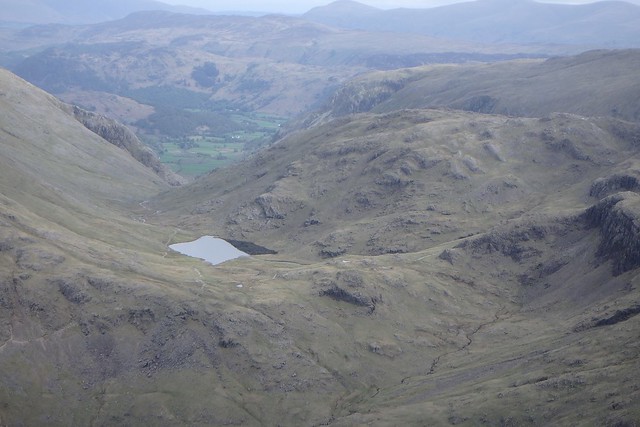 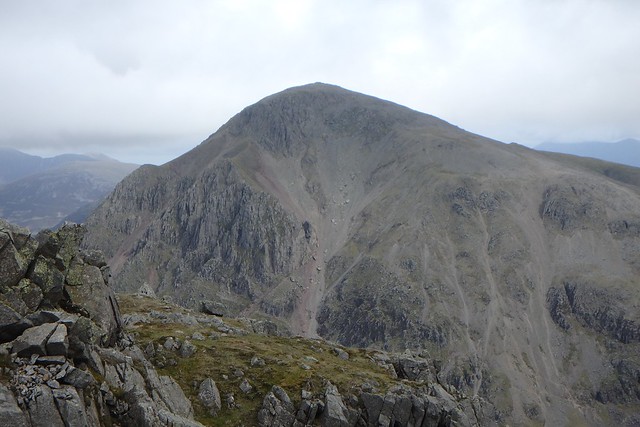 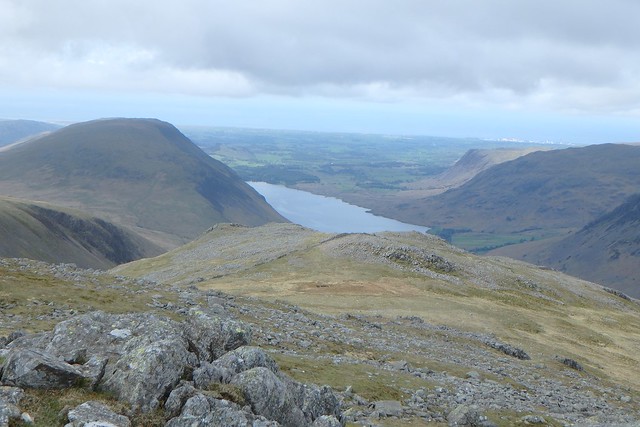 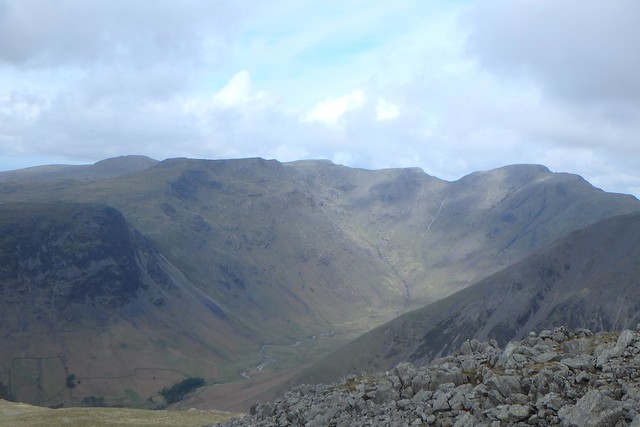 We had our lunch on the summit, taking our time, there was a coolish breeze, we had no problem with that considering that by now we should be in cloud with the chance of snow

the views were fantastic 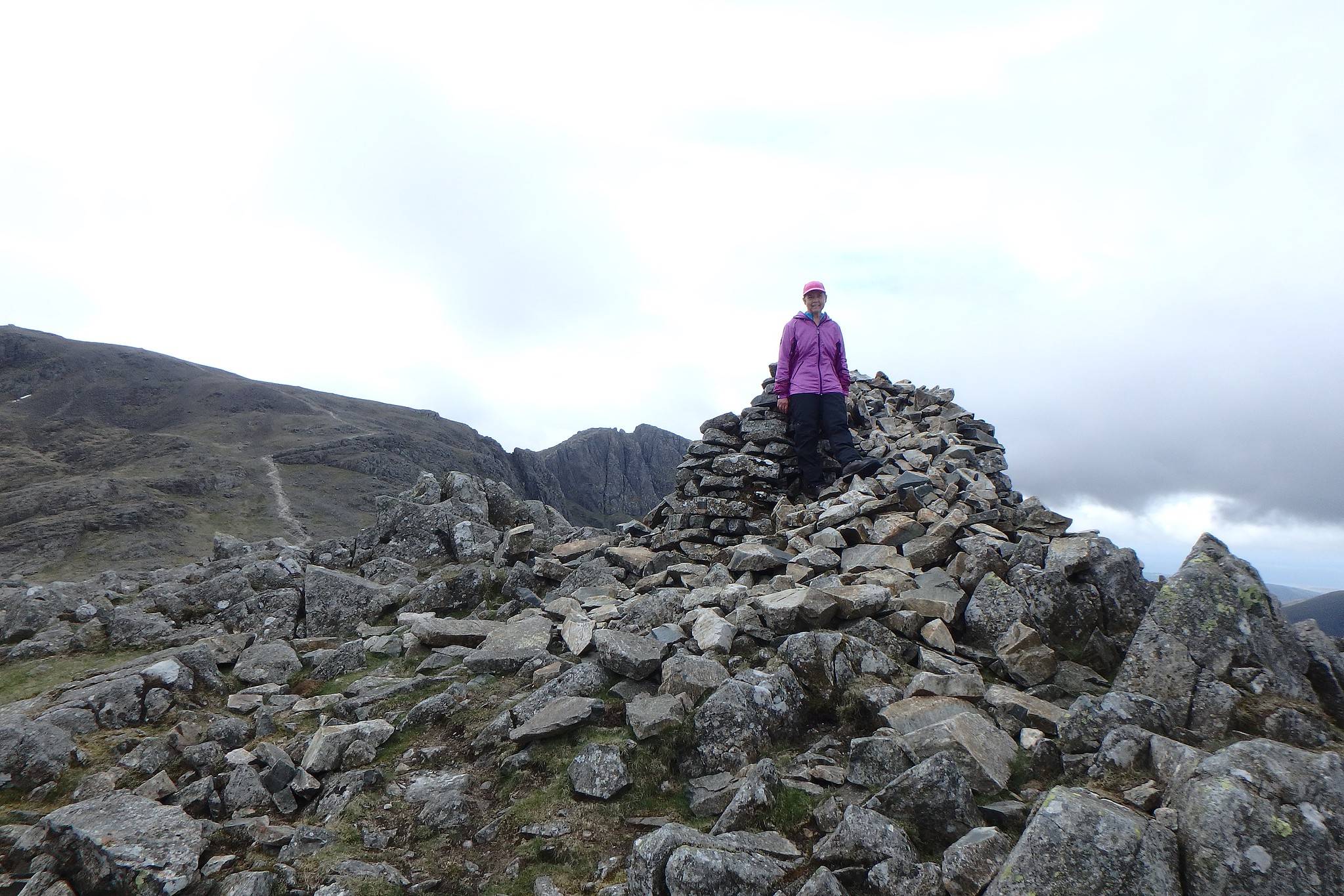 We had to get going, unfortunately, so we packed up and headed down to Lingmell Col and picked up the main path coming up from Hollow Stones, just above the zig zags. We hadn't met a soul up to this point, as we were getting lower and closer to Lingmell Gill we started to meet people on their way to Scafell Pike, the odd one at first, then more and more, by the time we'd got to the bottom of Brown Tongue it was looking like a busy town centre, it's good that people are getting out and enjoying the outdoors, I just hope they don't build a railway up the Scafells

Nearly down, the view back. 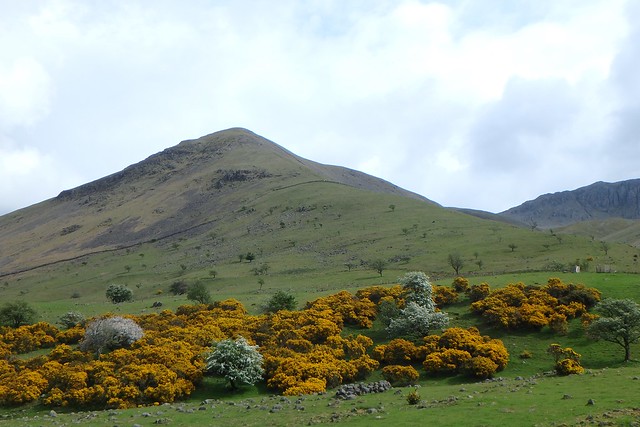 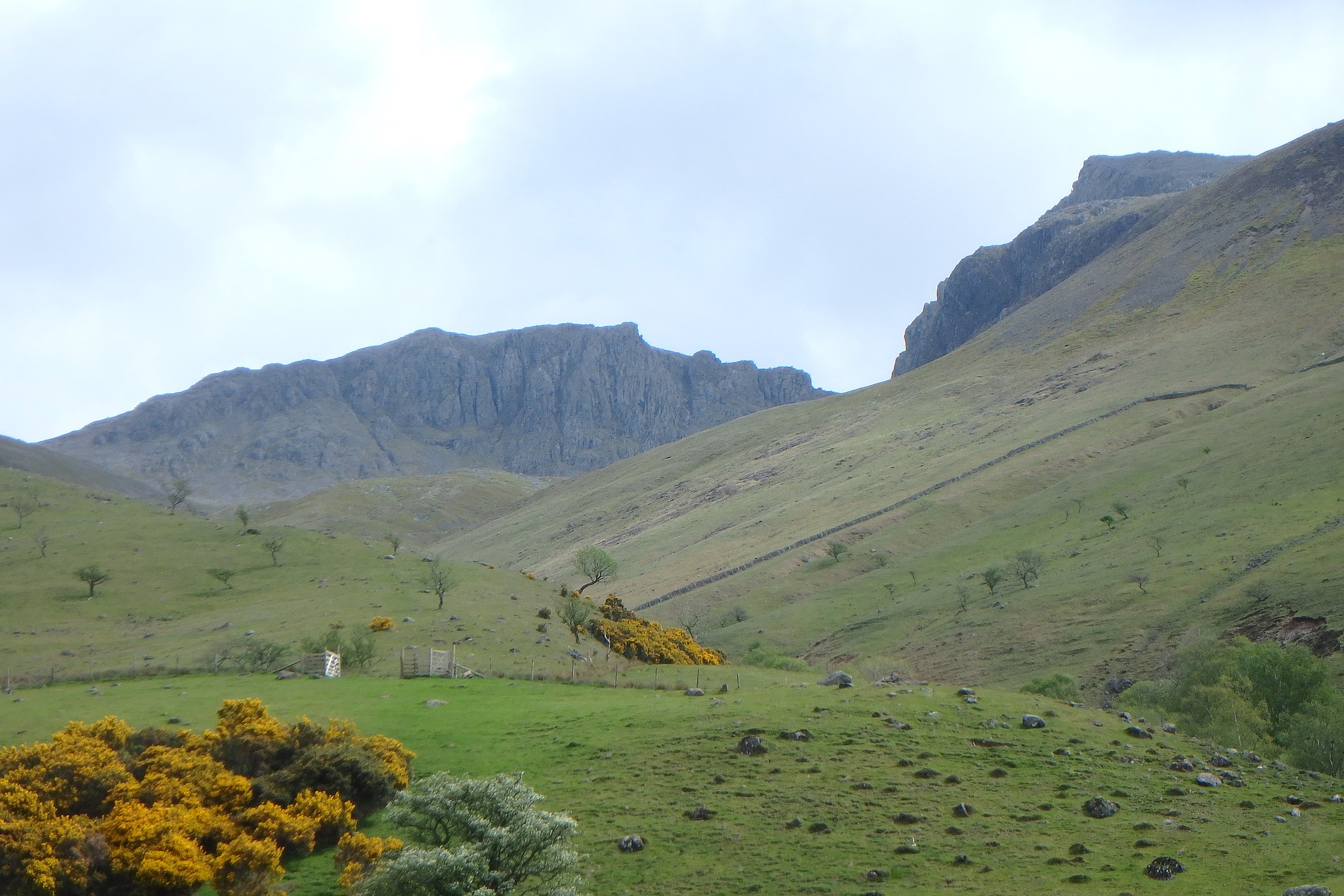 As we were nearing the car park we noticed that a ewe had just popped a set of twins out, they were very wobbly and searching for milk from mum, it's amazing how quickly nature takes care of life, before long they'd sussed out where it came from but hadn't got the technique of latching on quite right 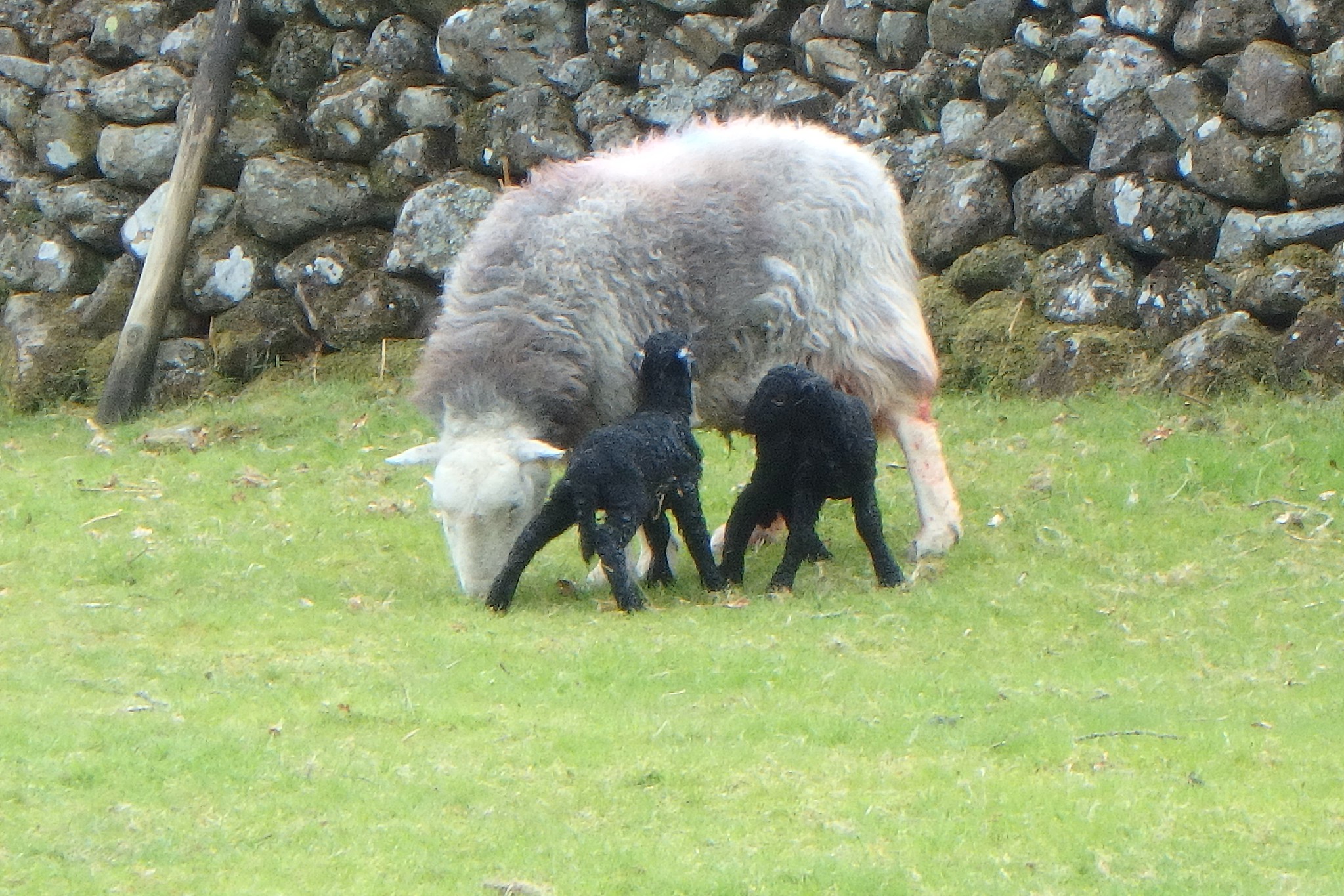 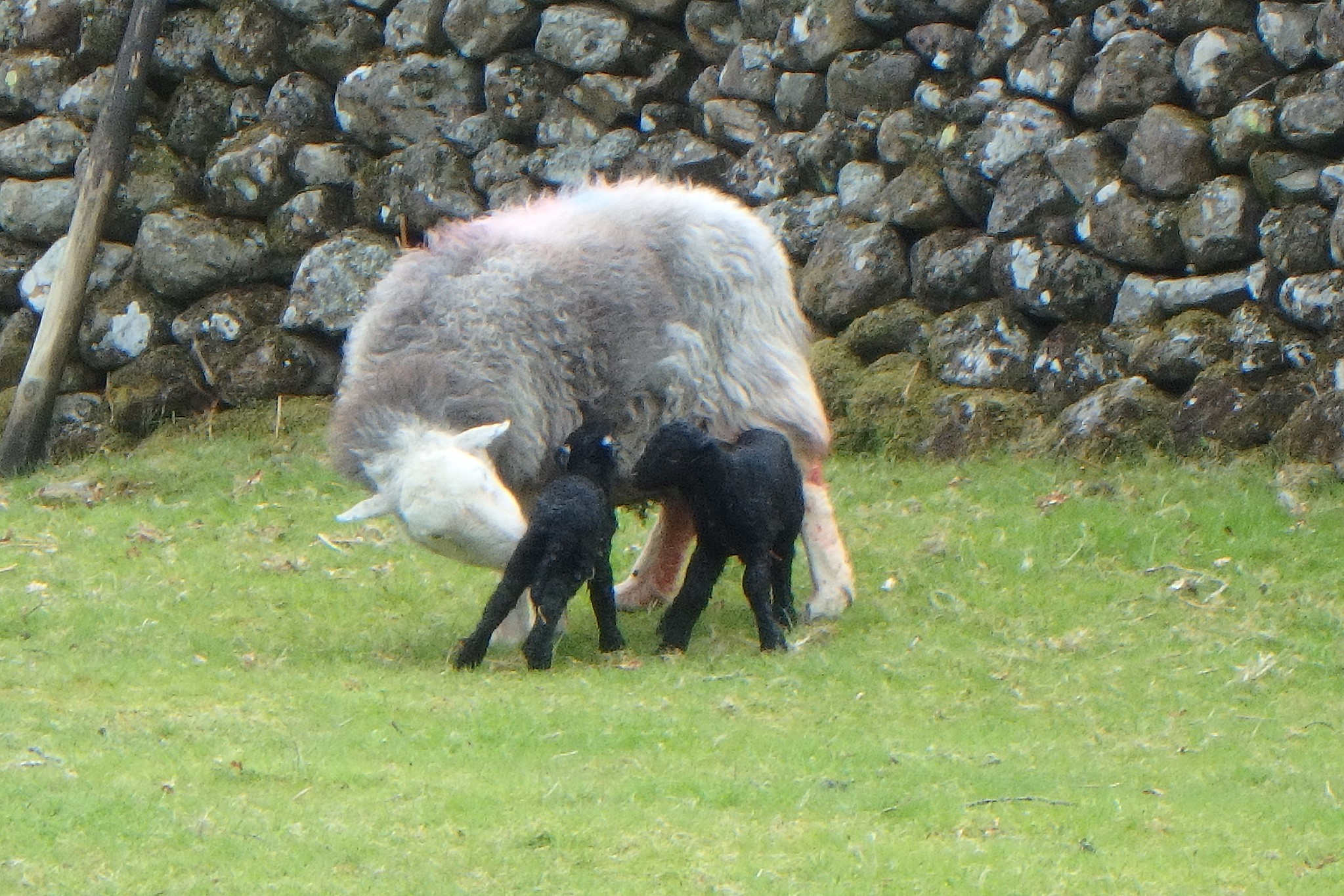 Back at the car park by half twelve, plenty of time to get home.

With just 3 "catch ups" to go we're already planning the next weekend away, at the moment things are on schedule, I love it when a plan starts to come together

And yet another good day on the fells for both of you with the bonus of some great weather. Great report and pics

trailmasher wrote:And yet another good day on the fells for both of you with the bonus of some great weather. Great report and pics

Yes, I'm looking forward to that day out, I last did the ridge in 1978 so it'll be like 3 new 'uns for me too, Buttermere is probably my personal favourite area in the Lakes.
Cheers.

Lingmell was our number 213 and is a fine fell in it's own right.Nice to get it on a good day.

johnkaysleftleg wrote:Lingmell was our number 213 and is a fine fell in it's own right.Nice to get it on a good day.

I've always liked Lingmell, the views of the bigger hills around make it worth spending more time up there to appreciate England's highest mountains.
Cheers