Having walked out from Peanmeanach, I had already done 5km and 200m ascent before taking the ferry across to Inverie. I arrived in Mallaig around 0900, in plenty of time for the 1030 ferry departure. The ferry was to be the WESTERN ISLES, a different boat to the return journey. I had learnt from experience that it is best to put on extra clothing when going out to sea and with a softshell jacket, it was a very comfortable crossing of Loch Nevis. I assume that this boat is preferred when there is extra cargo such as flat packed furniture, while the return boat was faster but with less storage space. Taking a boat does add to the sense of adventure.

The hill opposite Inverie looks worth doing as a sub-2000. After donning my gaiters to try and prevent ticks crawling up my legs and stopping at the cafe for a bacon butty and tea, I headed off for Kilchoan. ....a bit surprising considering the number of holes in the deer below! I had originally intended taking the bridge 1.5 km further upstream, but instead took the lower bridge across to Kilchoan and followed the track to a second cottage before heading up steep slopes of bracken and long grass. There were faint signs of a path but it was still very strenuous, especially with a big pack.
Looking towards Loch an Dubh Lochan with Luinne Bheinn to the right. The nearer ridge rising out of view on the right is the usually route to Meall Bhuidhe; one I have yet to explore! I have made two ascents of this mountain and neither were by the most popular route. Though hard work, this slightly more circuitous route did lead to a wonderful photo opportunity across Loch Lagain Loisgte and Loch Bhraomisaig. Great views of the Inner Hebrides .... Eigg, Rhum and Skye.

Looking east towards the the summit of Beinn Bhuidhe. The pointy peak to its left is Sgurr na Ciche, further left, (Going L to R) Sgurr Mor, Gairich and Ben Aden. Bidein a'Chabain is the main hill seen to the right but Ben Nevis can be spotted in the distance. Beinn Bhuidhe sports a fine cairn .... perhaps the Ordnance Survey considered its status higher (at least in the context of cartography) than the Munros to the north which have very modest cairns marking their summits.

Mam Meadail looked so close but there are a couple of significant bumps to traverse before I was to set up camp. There were good stops earlier but I wanted to be close to running water.

Taken at 0621 the next morning. Another beautiful day!

The route up to Meall Bhuidhe from Mam Meadail is steep and passes between broken crags. There is faint signs of a path but clearly is not a popular approach for Munro baggers. There is the occasional rock placed on a slab of rock or a small cluster of stones that is always too insignificant to call a cairn. I suspect that the route has been marked by estate workers rather than hill-walkers. I am always impressed with Ben Aden. It has a grandeur beyond it's modest height. Geologists will notice the folding in the rocks in the foreground. Looking back up the east ridge of Meall Buidhe. After spraining my ankle last summer and on several other occasions, I had descended the ridge with great care and progress was slow. Ladhar Bheinn left and Beinn Sgritheal right. The ground around the lochans below looks like there is potential for camping with other options on the east side of the ridge. However, it would have been the small hours in the morning had I pushed on to camp here. Looking towards Gairich and Sgurr Mor. The lochan is Lochan nam Breac which I camped/Bivvied at the far end of in early June 1994. The summit of Luinne Bheinn using a 10 second shutter delay. 25 Years and 26 days between ascents! I took very few photos back in the film days, so comparisons are not possible. Perhaps that is just as well! The modest summit cairn of Luinne Bheinn with Ladhar Bheinn and the Cuillin ridge beyond. I knew that I was pooped when I reached Mam Barrisdale and did consider setting up the tent there and walking down to Inverie the next morning, but I decided to press on! I often drink from small burns on the hill and on this trip, I had also taken water from small lochans, which I boiled to make a hot drink. I had filled the hydration bladder with water from the hill the previous evening. I had also soaked my sunhat and "smelly helly" to cool myself down. I had tried to rest in the shade of large boulders. However, the heat had taken its toll and I was keen to get down to the shade of Aonach Sgoilte and find some cold running water in which to dip my feet. On reaching a suitable place, I was feeling a little unwell and I lay with my eyes closed for a while.

While the path is clear, it is quite rough and very wet in places, even after a couple of days of hot, dry weather. Besides the amazing scenery, there was a fair amount of bird life to add interest, including a pair of black-throated divers. These were momentary distractions from my sore feet and the fact that my rucksack seemed heavier and heavier, each time I raised it onto my shoulders. I was hoping to make it to The Old Forge before closing time and I arrived a little after 1000. I ordered a beer and asked about food. Much to my surprise, they could rustle up some venison stew! However, after a while, I had to step outside for some fresh air. I felt dizzy and was breathing fast, even at rest. I went back in side but then had to leave again and go and lie down on the cool grass across the road.

JP, the landlord brought out an electrolyte drink with lime and a lot of ice. Later, my food was brought out to me but JP suggested that I sat in the refrigerated room where the kegs of beer were kept. Staying there for 10 minutes and replacing my body fluids did lead to some degree of recovery and I was able to go back to the main room to eat my food. Eating seemed difficult, but became easier with each mouthful. I was even able to engage Julian and his partner in conversation, They had been sat on the next table and had shown some concern regarding my well-being.

Having eaten all the stew and half the chips, I was feeling somewhat better but still did not really want to walk down to the Long Beach campsite, so I asked if I could lay my sleeping bag down in the shelter diagonally opposite. I was unaware of the story behind the shelter. See https://www.pressandjournal.co.uk/fp/news/highlands/1746983/remotest-pub-in-scotland-now-has-a-rival-as-local-hostilities-erupt/ for more on the matter.

I cannot comment on his relationship with the local community but he showed great concern for my welfare, doing everything he could to assist my recovery. For that, I shall be forever grateful., The weather changed during the night. I could hear waves crashing on the rocks at the back of "The Table". At times, it sounded like a train was coming followed by a sudden gust of wind that slightly shook the shelter. I did sleep reasonably well, but I was up and about quite early, certainly before the rest of the village had woken up. I went for a stroll along the "Main Street" and got talking to a fellow hill enthusiast called Chris. We were both planning to be on the first boat back to Mallaig, though neither of us were booked on the first sailing. This was not a problem. The boat was a twin-hulled, speedier looking vessel which transported us back to Mallaig in what seemed like no time at all. Our arrival was met by this Harbour Seal, which was looking for an easy meal. I guess it cannot distinguish between a fishing vessel and a passenger ferry. Excellent account. Having been in Knoydart myself fairly recently I can sympathise with hoe tough an area it is. It's not called the Rough Bounds for nothing....

Great report with some superb pics.

This place is so magical when you have decent weather.

Coincidentally I also had a real almost-collapse phase when walking the Rough Bounds last summer. At the time I attributed it to dehydration, but in retrospect I think it may have been a precursor to the heart trouble I now have. It might be worth checking with your GP.

The view of Ben Aden is fabulous, and makes it much clearer to me why I had such a struggle to get down it on the south west side.

Looks fabulous - and yet another reminder of why I need to get my finger out and get to Knoydart this summer!

Grat Report, but wait until you start doing the lesser hills (I made a mistake with Ben Bowie. 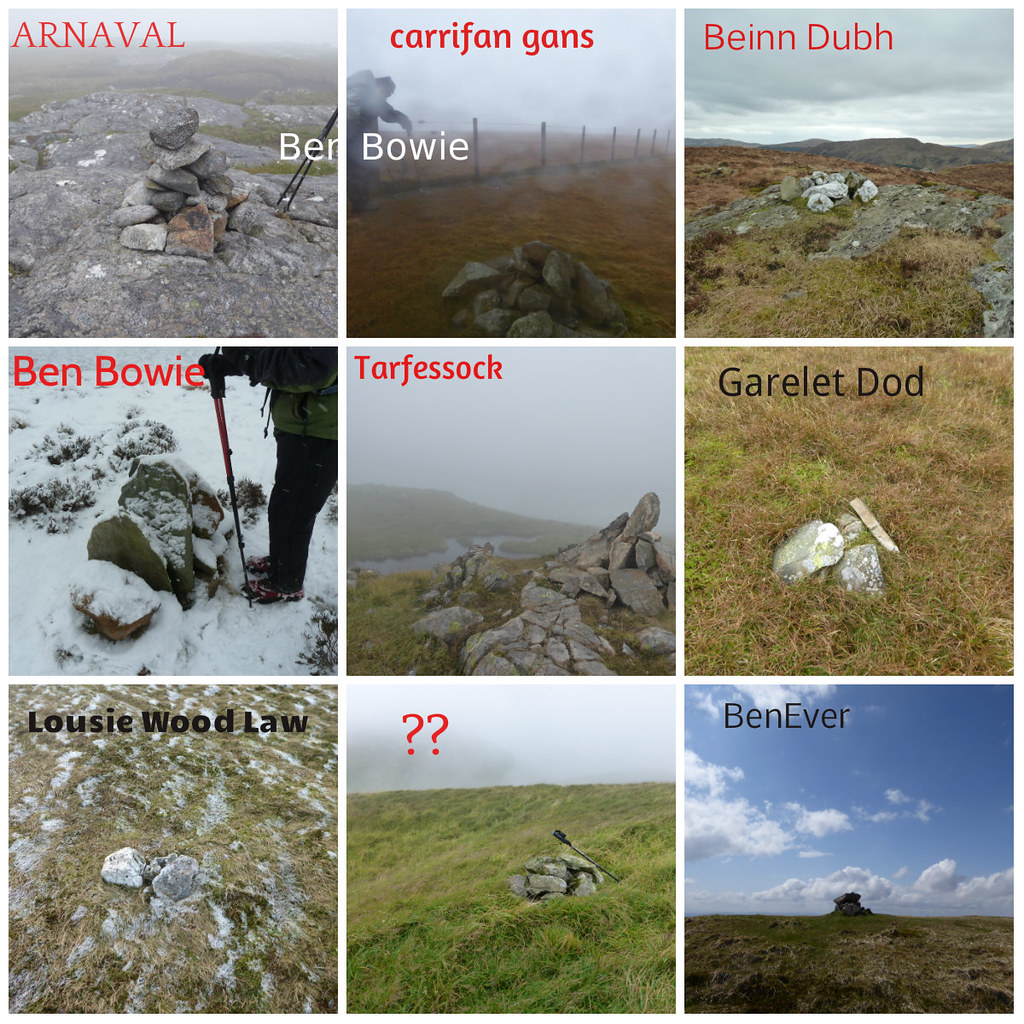