Checking the weather forecast a couple of days before the weekend showed a lot of rain for the Western Isles, but 27 degrees for Aviemore at the weekend. Sold! It was a no-brainer to change our plans and to head east to Aviemore to tackle the Cairngorm 4000er route that I had been saving for a special weekend.

We parked up at Cairngorm Mountain ski centre car park about 10am on Saturday morning. I locked up our mountain bikes in a hidden place for the weekend while we were in the hills (didn't want to risk leaving them on the car in the Sugar Bowl car park). Grabbing a motivational coffee first, we started walking from the ski centre about 10.45am, heading up a very windy "windy ridge" path to the summit of Cairn Gorm. Halfway up I was wondering if this route was a good idea since I was staggering sideways with the wind trying to blow me off the path. As always, my laden overnight rucksack was doing a great job of being a sail to make progress pretty slow. We reached the summit of Cairn Gorm at 12.25pm, but never bothered hanging about much as the wind was strong. Ben Macdui next, and I was looking forward to walking along the tops of the Northern Corries, which I saw none of the last time we did the Cairn Gorm/Macdui route (we were in the cloud from the car park and it never lifted all day!). 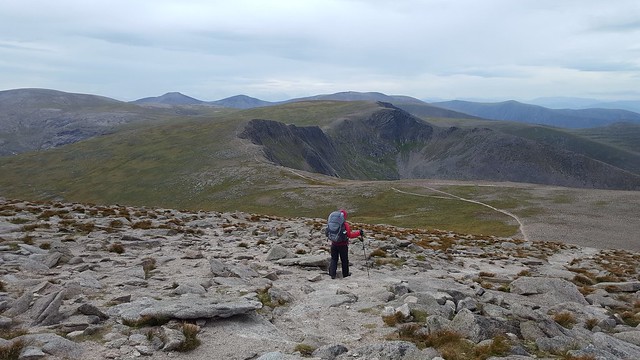 Descent from Cairn Gorm towards the Corries 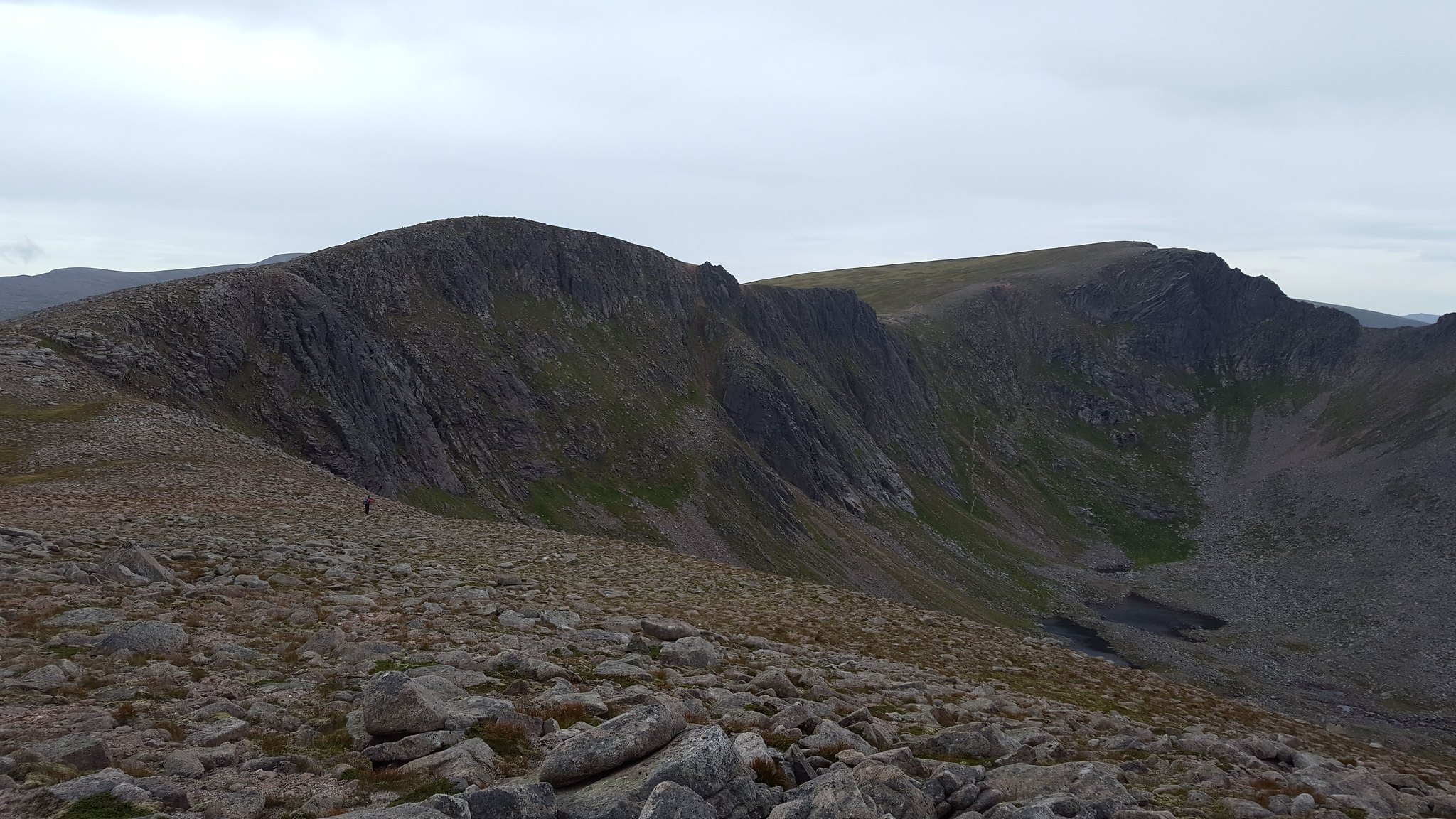 Laura in the foreground giving some scale

Enjoying the views down the corrie cliffs, we slowly made progress towards Macdui. It was nice being in no rush at all, we had plenty of time before our planned camping spot by Corrour bothy. My eyes were fixed on Cairn Toul, Angel's Peak and Braeriach, which were tomorrow's objective under what I hoped would be a cloudless blue sky. 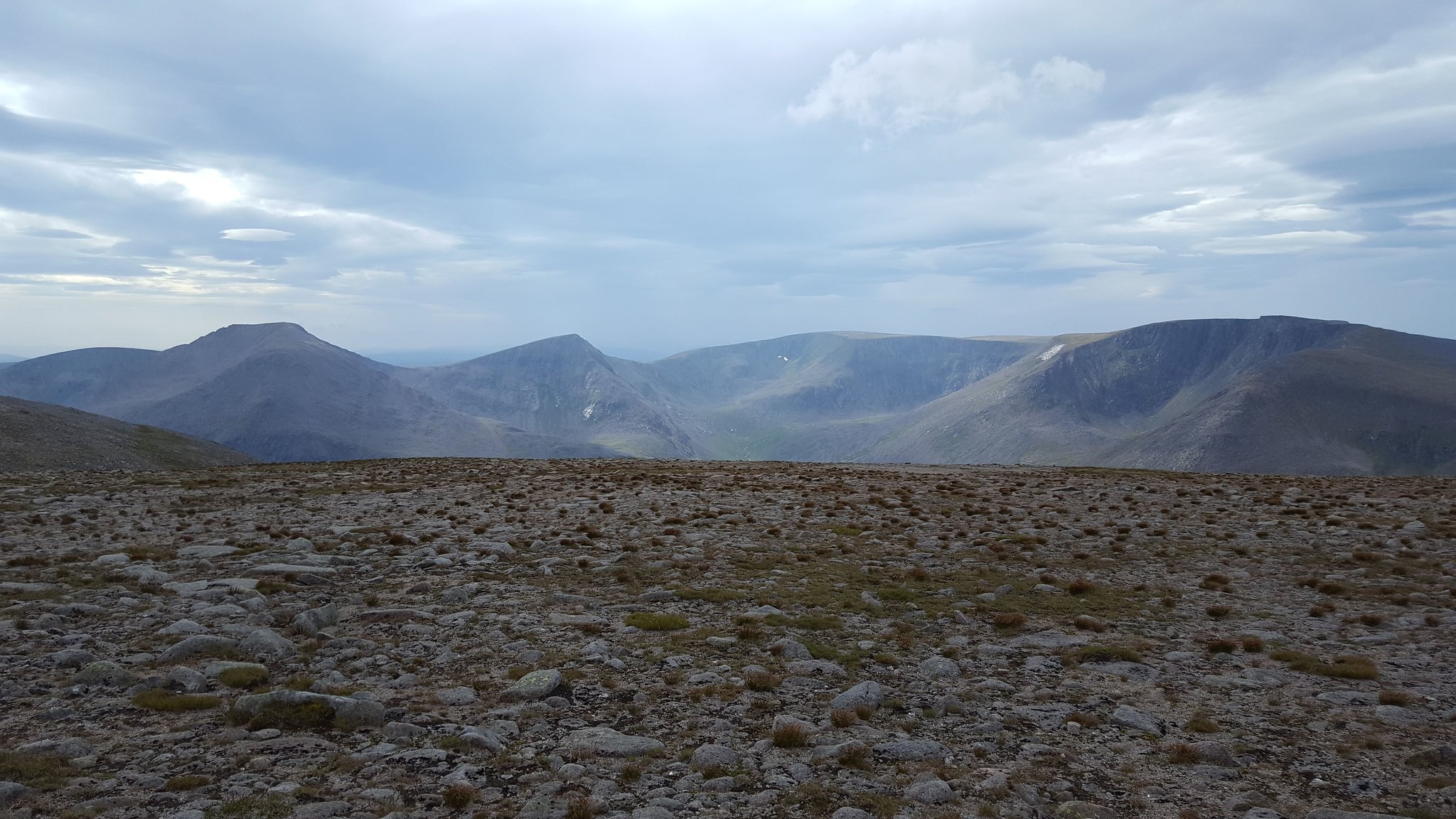 About 3.20pm, we were standing on the summit of Ben MacDui again, although it was nice to see the view this time! There were probably 25 people on the summit when we arrived, but none when we left, all heading back towards the ski centre. We faffed about eating peanut butter and jam sandwiches and checking the map to confirm my chosen descent route of following the Allt Clach nan Taillear burn, to the SE of the summit. It was also nice to see that the high grey cloud that had been overhead all day was starting to break up! 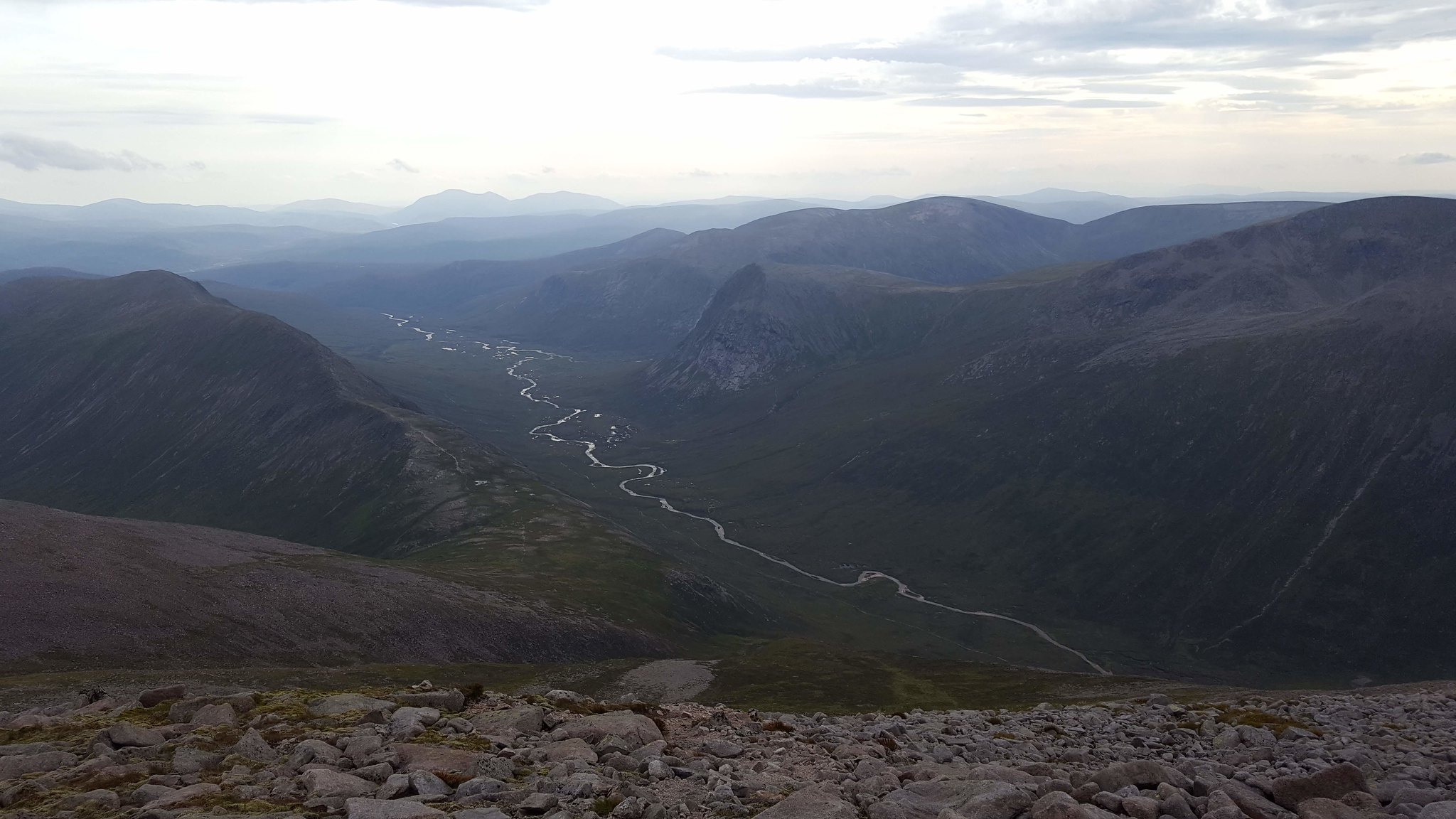 Stunning views east down to Lairig Ghru to the Devil's Point and beyond. 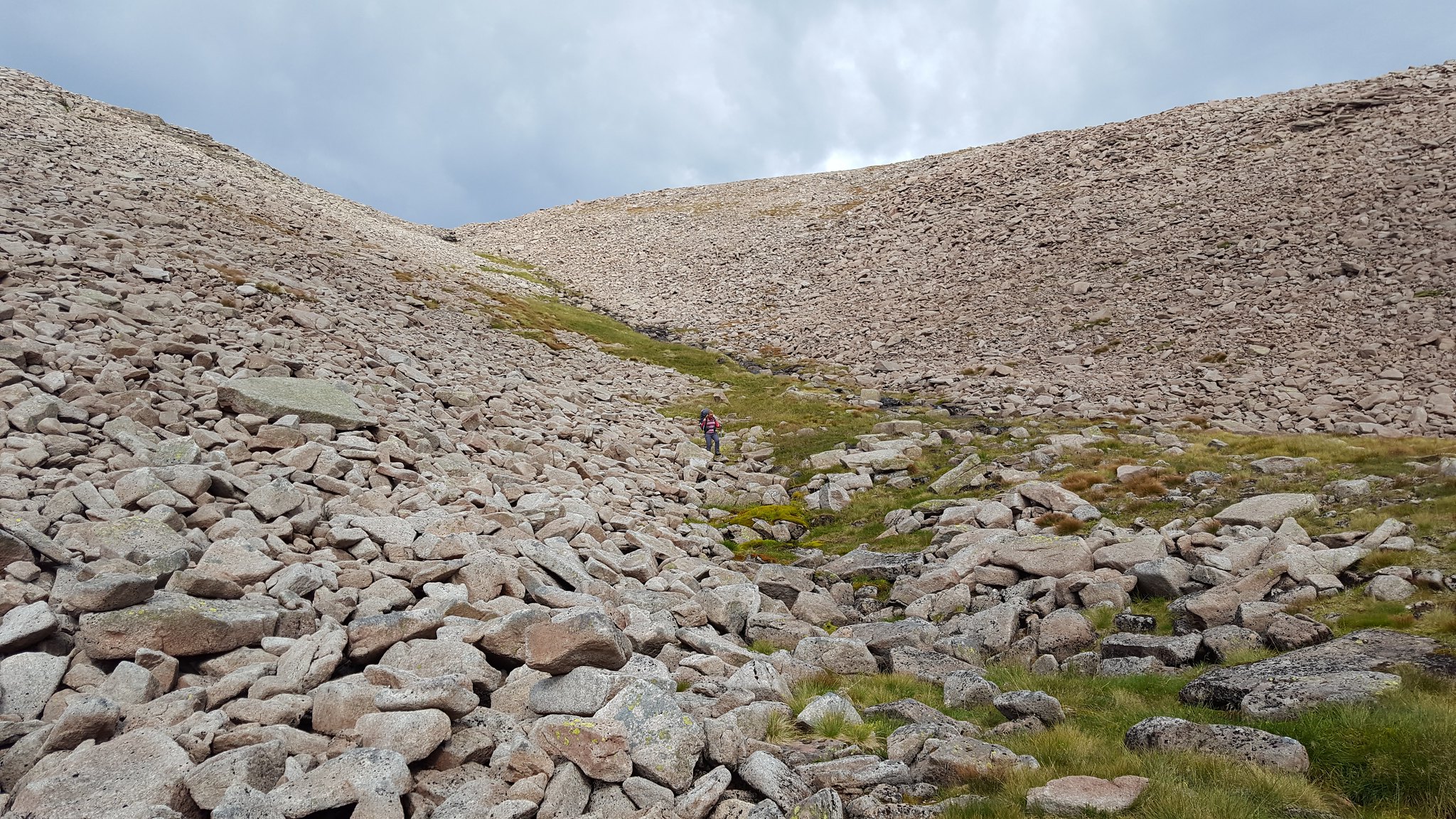 The long descent down the burn to the Lairig Ghru (path at top and bottom sections). 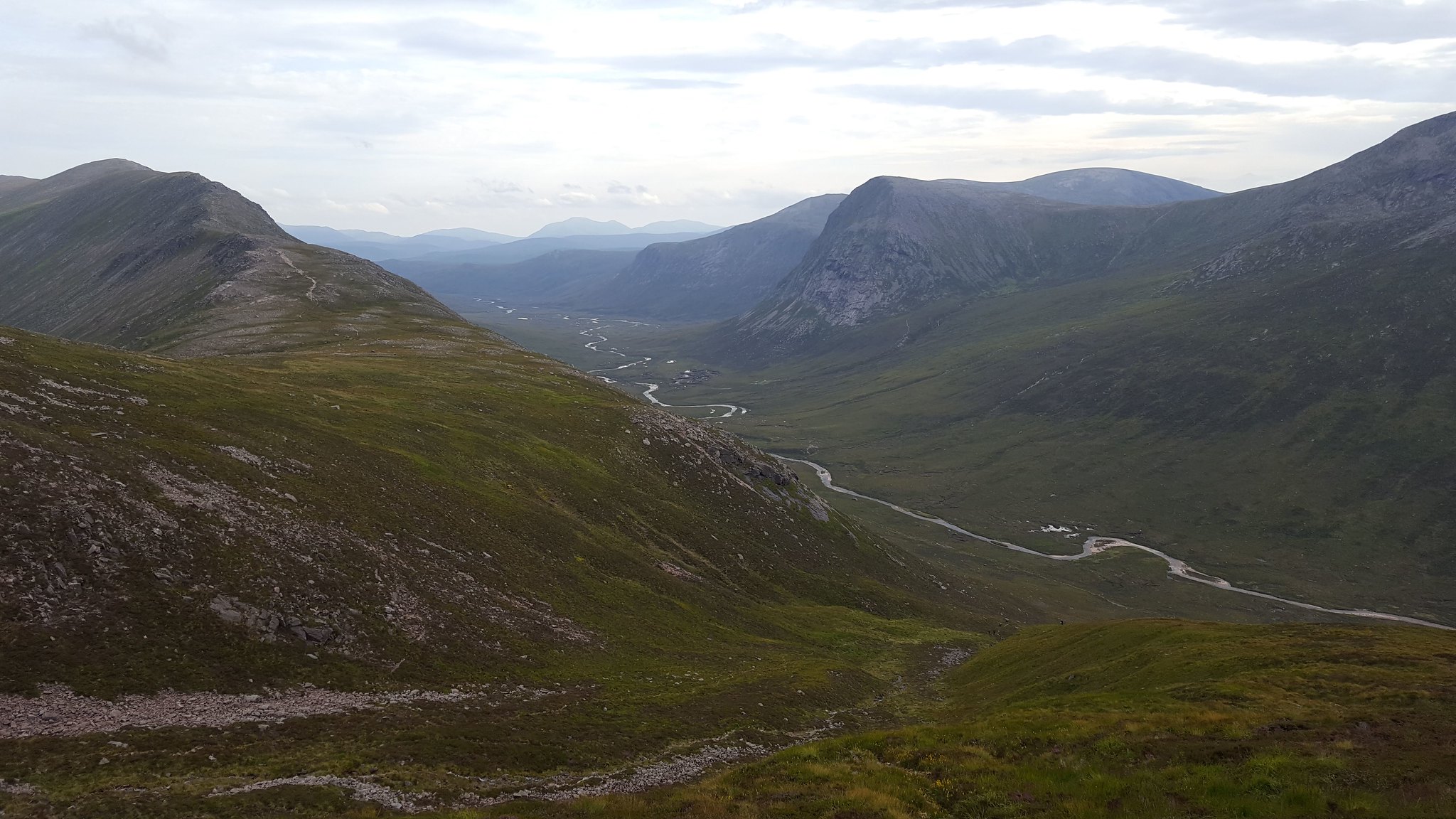 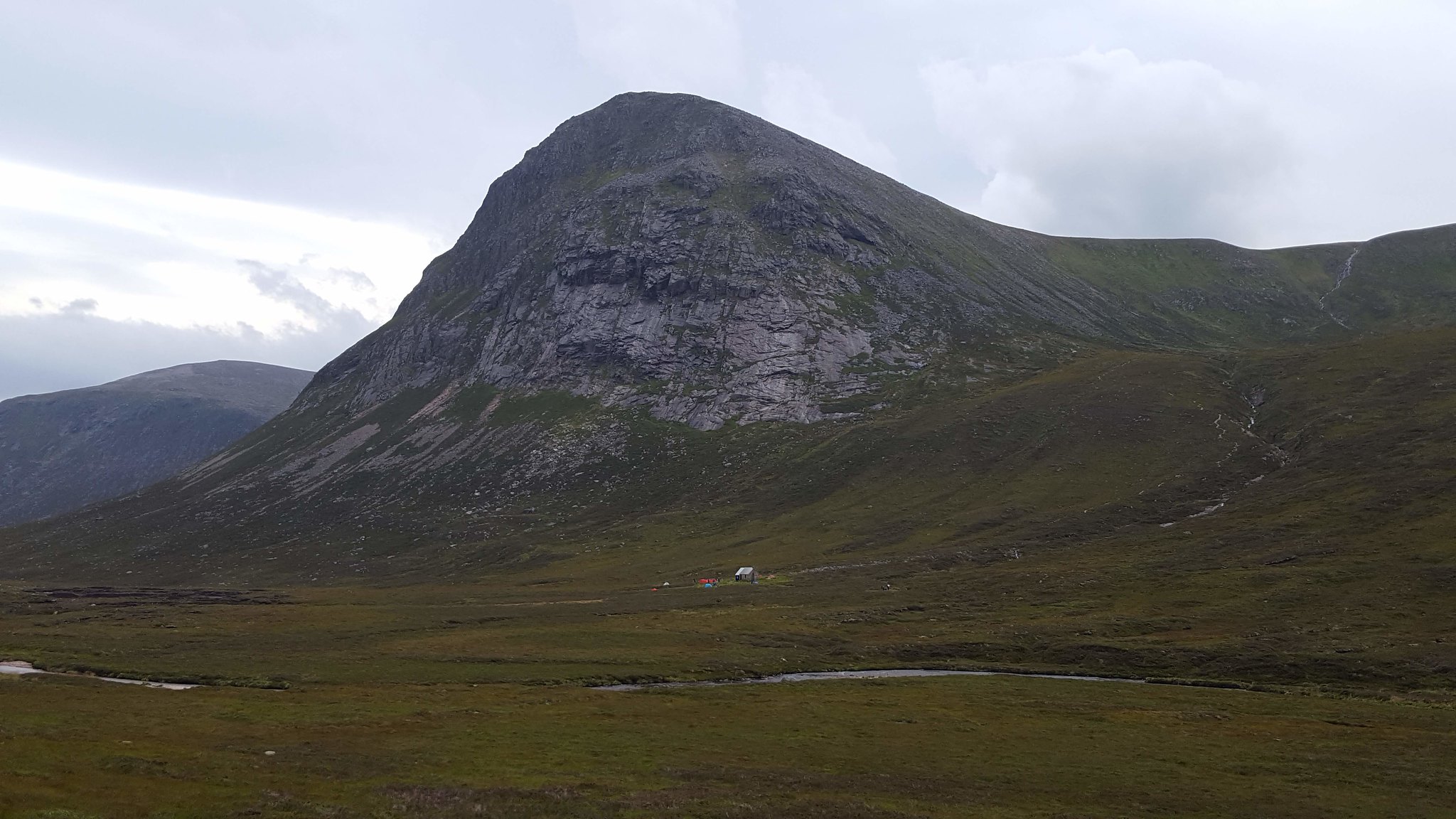 Finally down in the Lairig Ghru, looking to Corrour bothy

After a long descent down rock, scree, minor bog and path to finish, we reached the Lairig Ghru path and started the 1km or so walk towards the bothy. We had seen about 6 or 7 tents already set up and a steady stream of people walking along the Ghru path. I was becoming concerned that we would struggle for a pitch! Of course, it was a bank holiday weekend and the forecast had obviously inspired everyone to have a similar idea...

About 6pm, on approaching the bothy, we both noticed a bad sign....everyone had hoods up/midge nets on/or had hands clasped over their faces in desperation! UH-OHHH!!! We experienced a few midges on the path to the bothy, but as we got within 30m or so, they exploded into mega swarms of the wee buggers. Literally clouds of them everywhere. Biblical midges....nightmare! Without even pausing, we ploughed straight through the array of tents and made a bee-line for the path up to the Devil's Point bealach. Stopping only to deploy our own midge nets, it was the fastest we had walked all day by some distance, despite now being tired and thinking we had reached the end point of the day. I wasn't entirely sure if there was a good spot to pitch the tent at the bealach, but spending the night by the bothy was not an option. I would have sooner kept walking all night! Another group 15 mins in front of us had the same idea, but there turned out to be acres of space above the waterfall at the bealach, and NO MIDGES! woohoo!

Pitching the tent and getting dinner fired up on the stove, we then made the short 10 minute walk to the Devil's Point summit so that we could continue the route first thing in the morning. The view was stunning! Heading back down to the tent, we turned in for the night in our wee tent. Mercifully the wind had all but dropped to zero, so it was a peaceful high camp for once!

I opened the tent door about 5.50am the next morning, and could see the sky glowing orange. Ah well, looks like I was heading back up to the Devil's Point for sunrise! So glad I did... 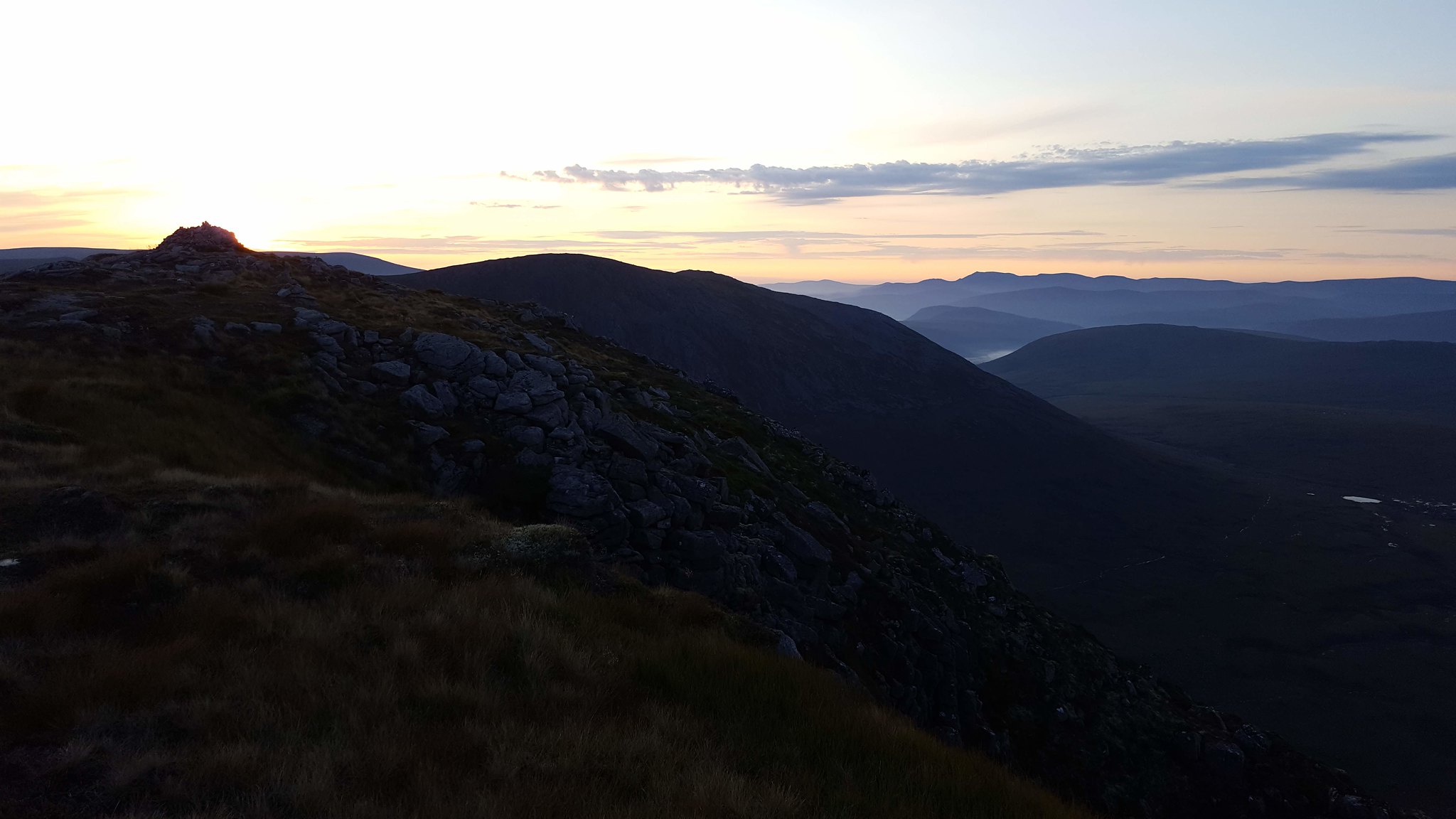 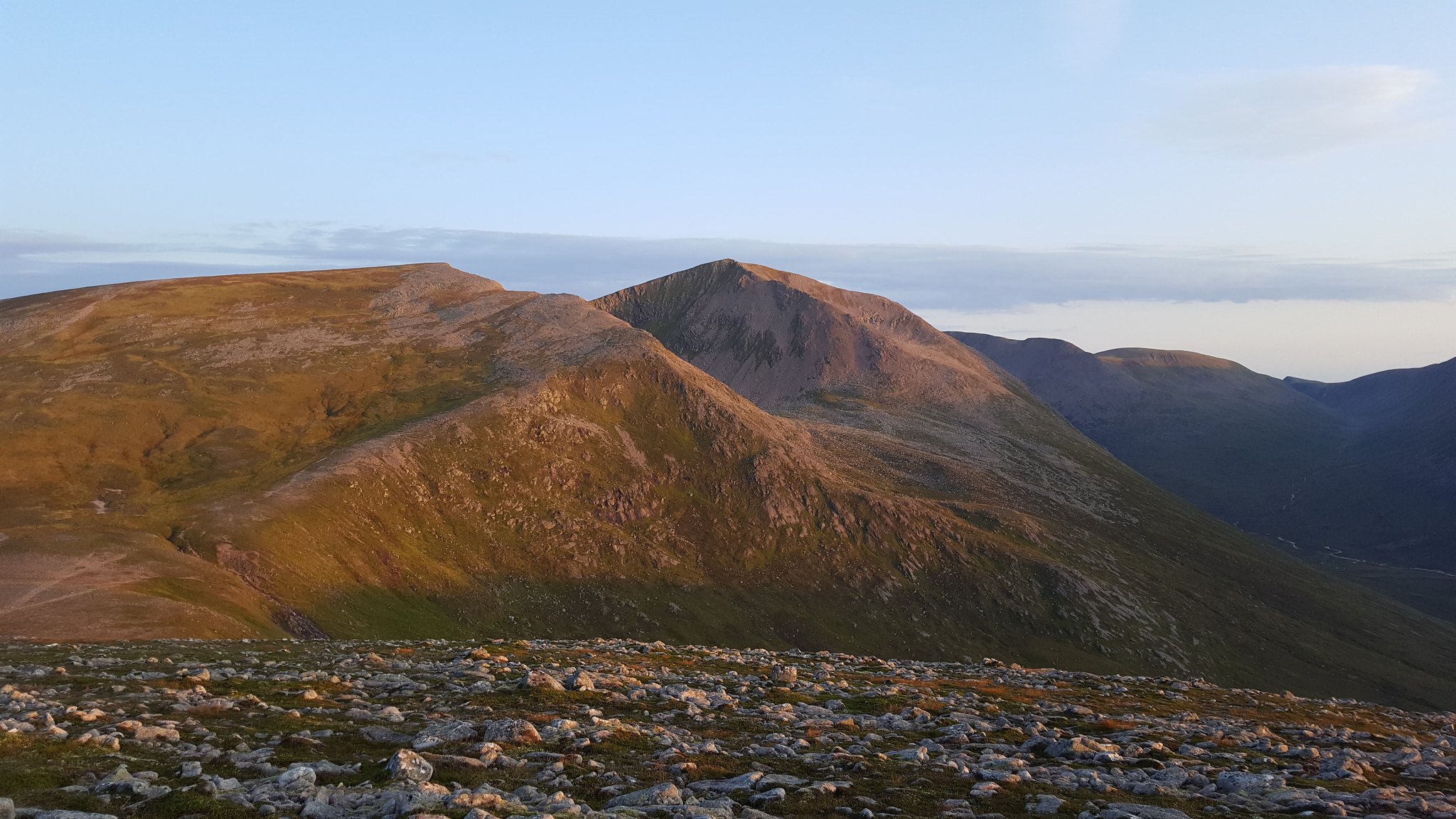 Watching the sun light up Cairn Toul was an amazing sight and definitely one of the highlights of the trip. I had the summit to myself too! Perfection. 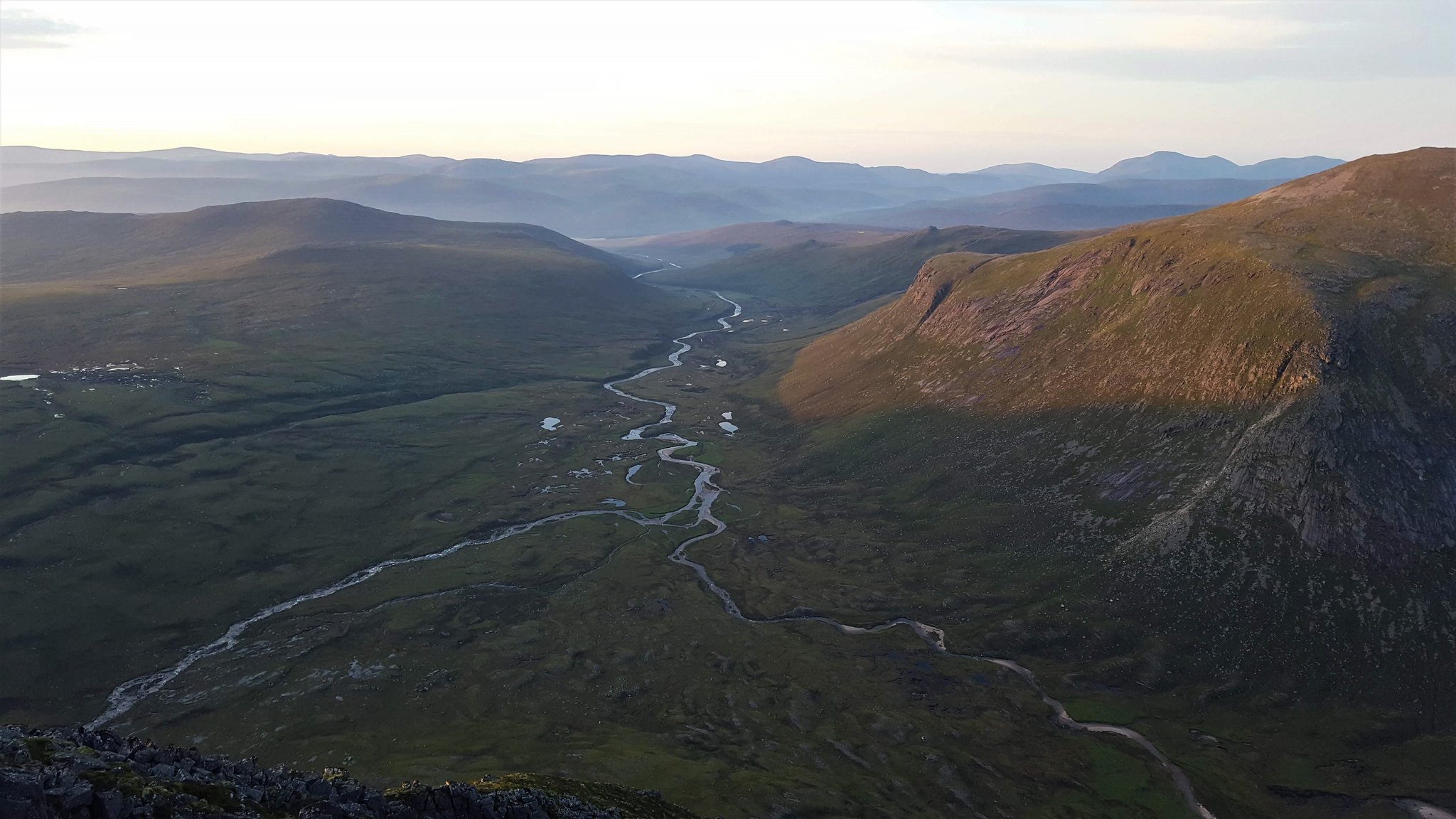 I then headed back to the tent and grabbed a wee picture of our pitch before taking it down and setting off again for the day I had been looking forward to for ages... 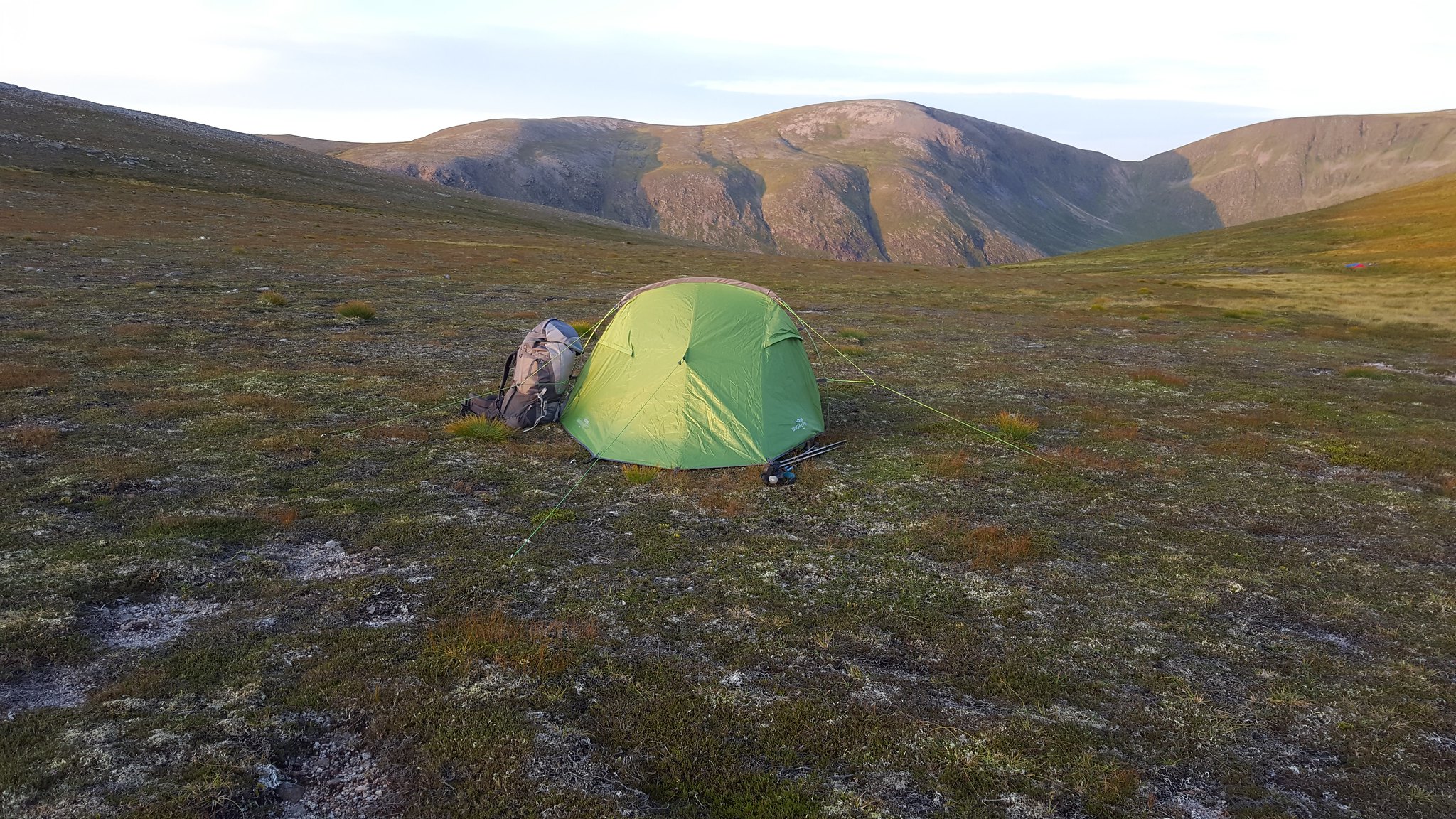 Bealach pitch. Macdui behind me and Monadh Mor straight ahead.

About 7.10am, closely behind our fellow bealach campers, we set off for Cairn Toul in the most majestic morning light. As forecast, there was hardly a cloud in the sky and next to no wind. It was already warm and T-shirt weather from the start. Yaasss! 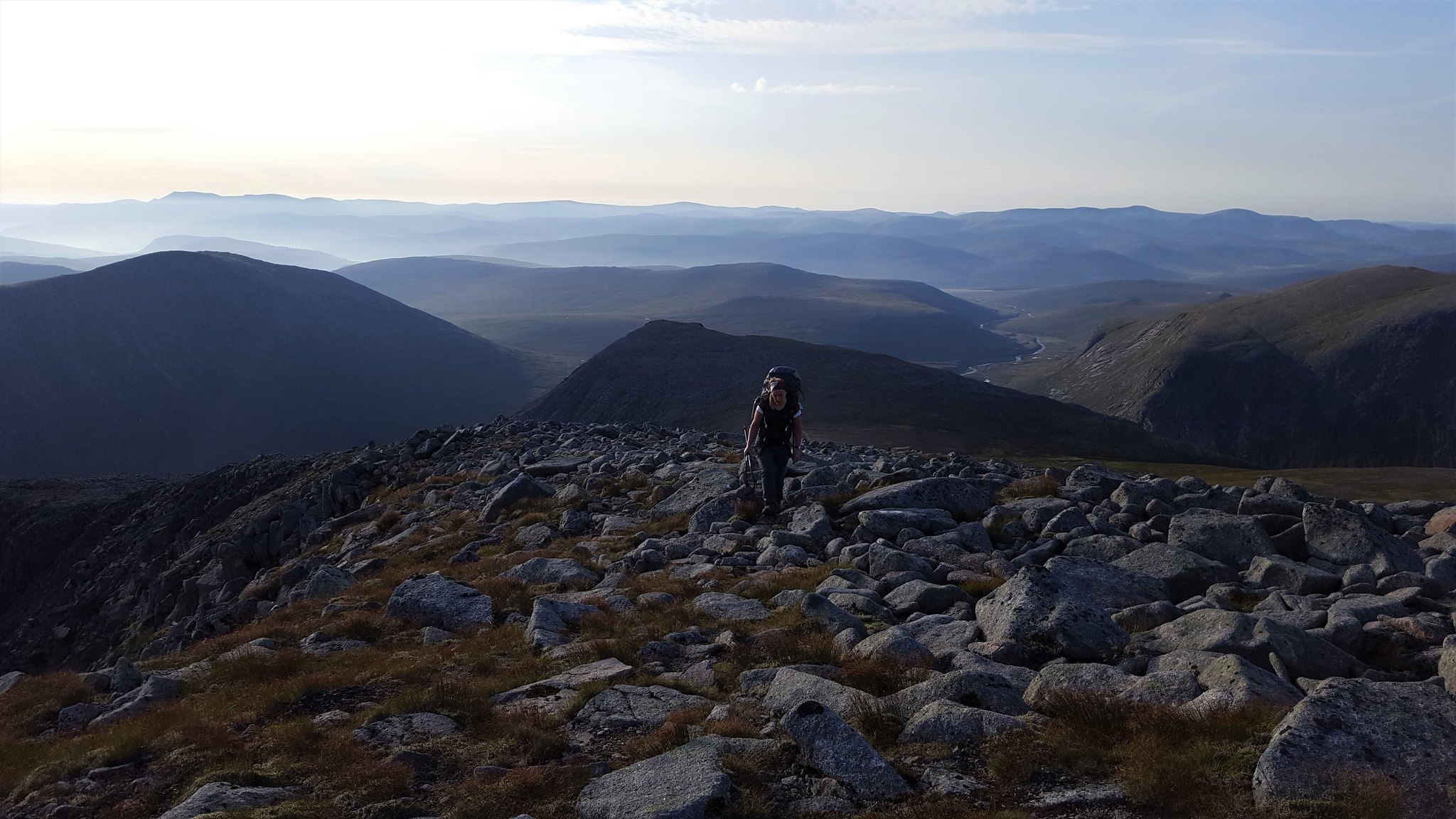 Laura following the ridge line up to the Cairn Toul summit. 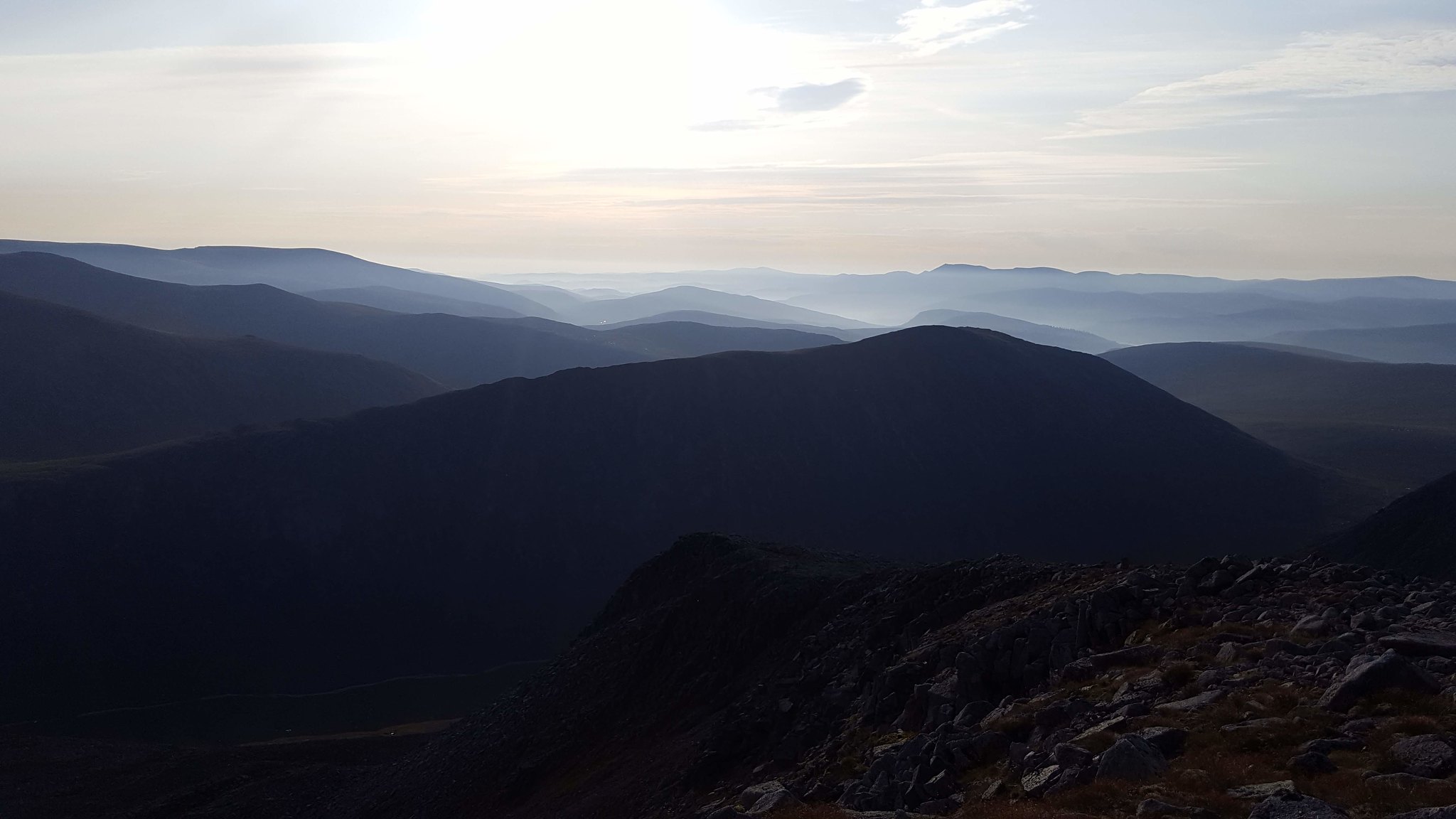 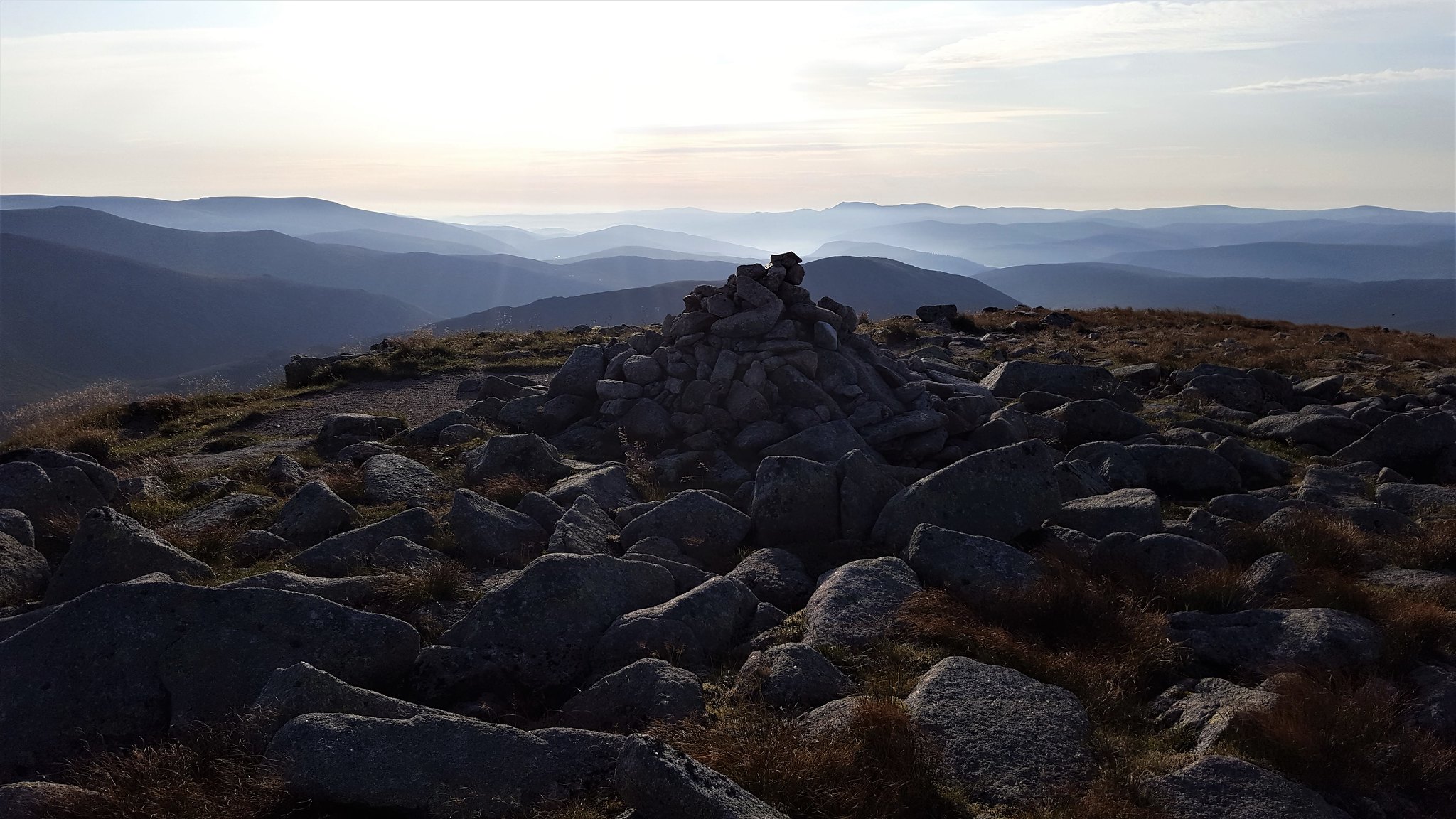 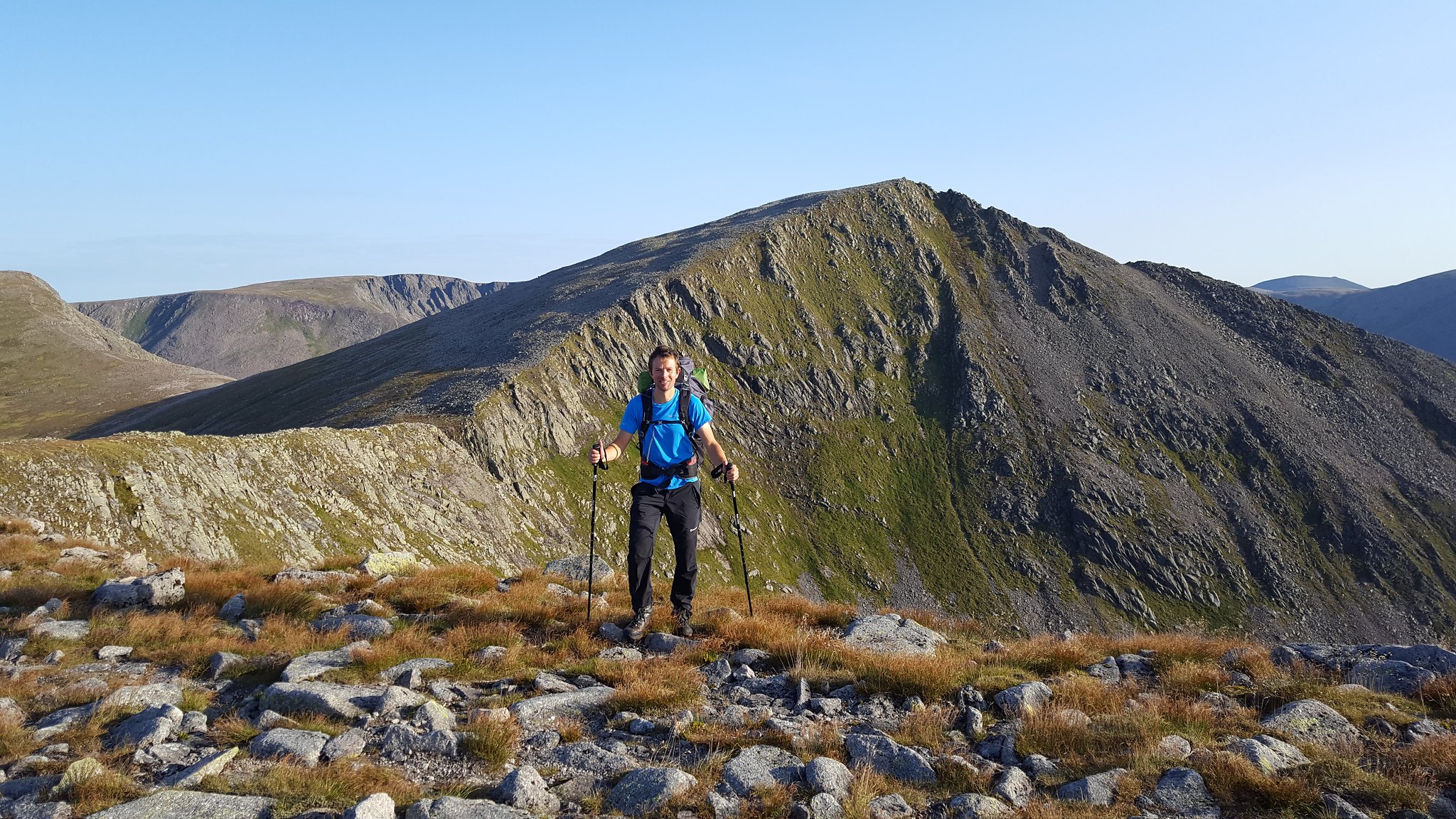 As you can probably guess, progress was rather slow as we were just gawping at the views in all directions and then sunning ourselves at every invitation to pause for a few minutes. After reasonably easy walking, aside from a few bouldery sections, we hit the summit of Cairn Toul at 8.50am. What an incredible place to be.

The next peak was Angel's Peak, and apart from another boulder field on the descent, it isn't far at all. Even at sunbathing pace, we stood on the summit at 9.45am, chatting away to our fellow campers and also a solo walker on holiday from Birmingham. My first objective was to look down Angel's Ridge, which is also high on my to do list! 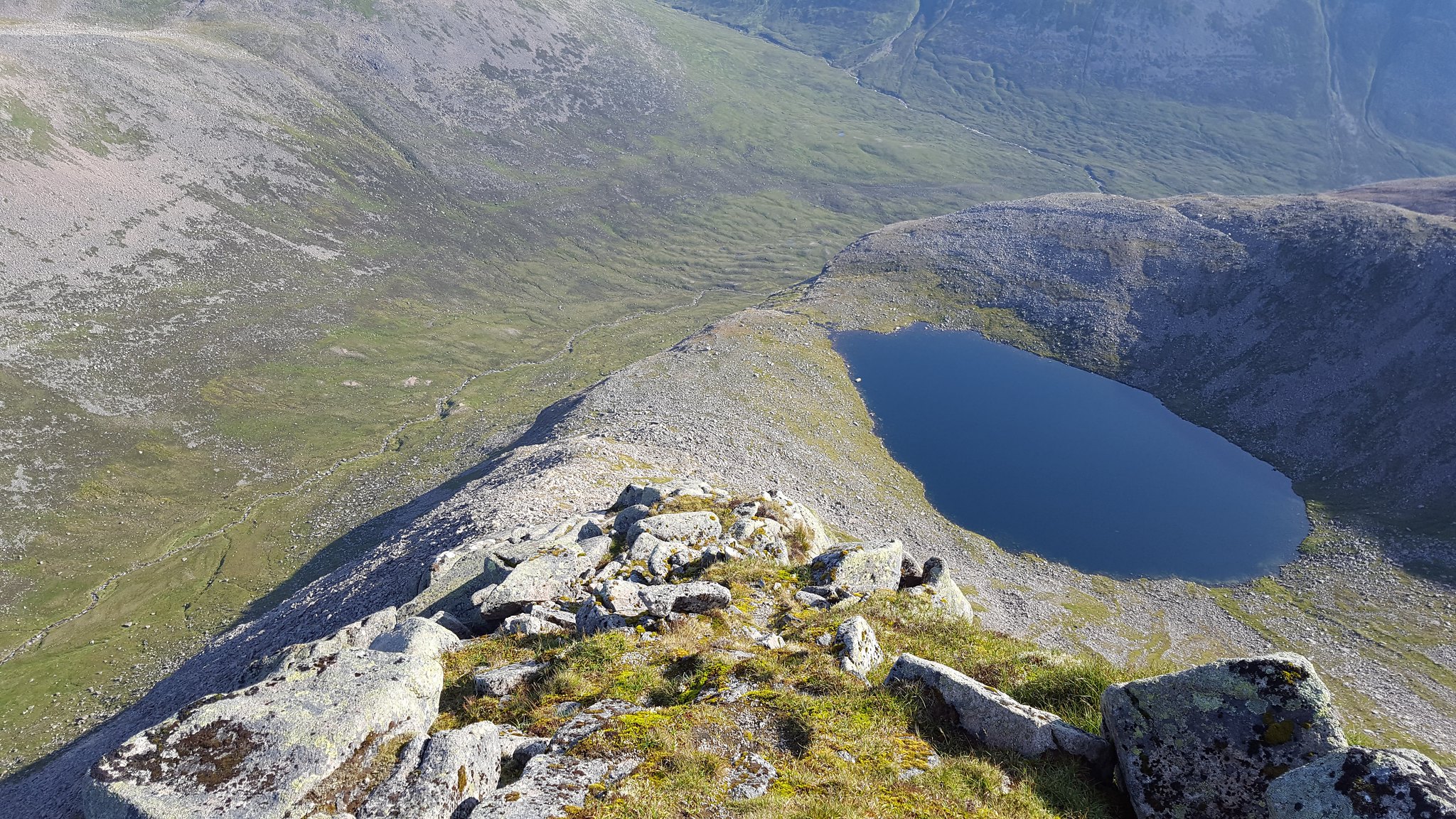 The mighty Braeriach and our next target. 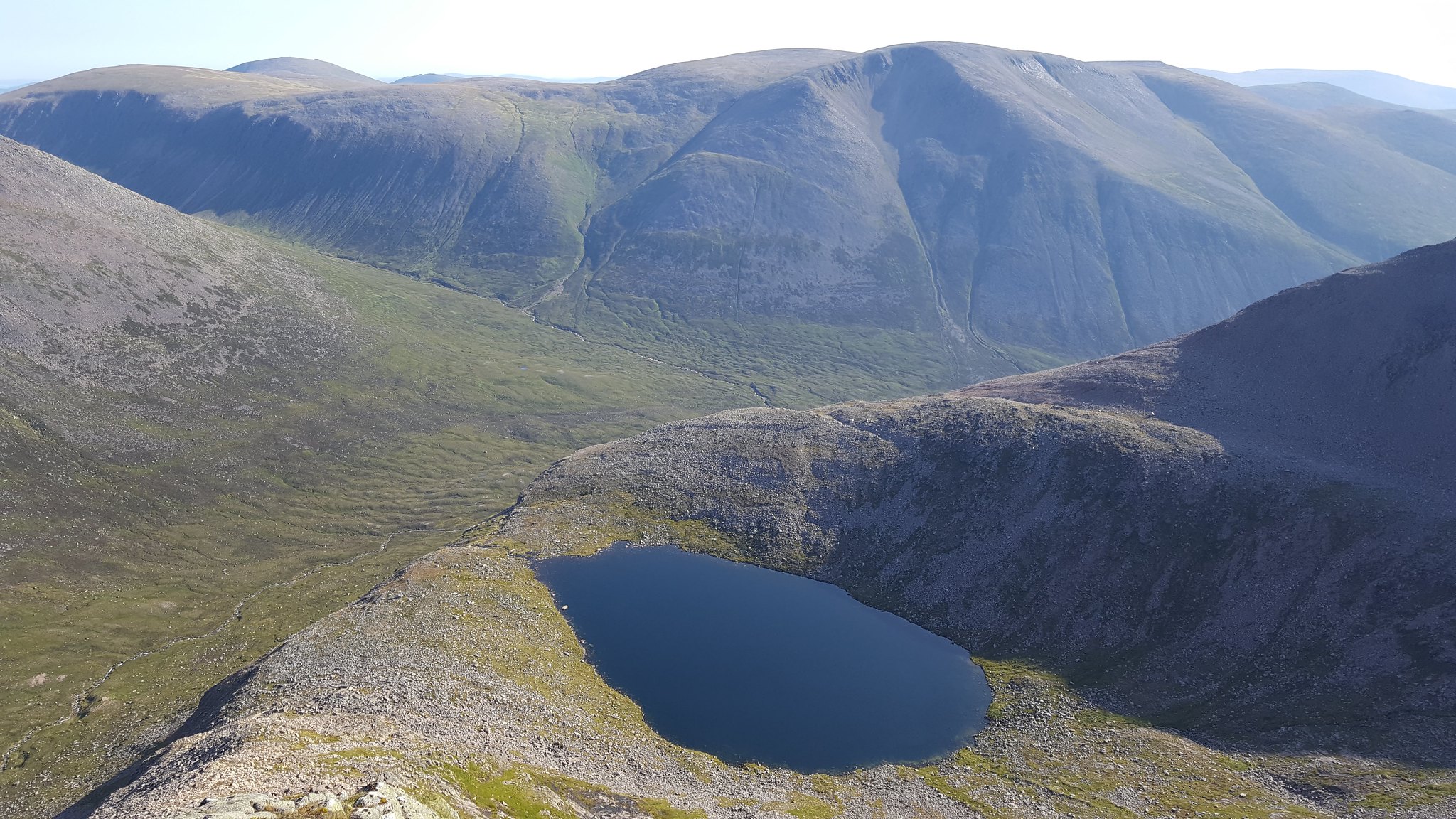 Looking back to yesterday...Ben Macdui and Cairn Gorm (left).

The sun was really starting to belt down and it was proper hot, even at 4000ft! The long trek above Braeriach's massive corries was well interspersed with sandwich, chocolate and water stops. The scale of Braeriach is just immense, and those cliffs, wow! I couldn't wipe the smile from my face on this traverse, I felt so lucky to be experiencing these mountains in such idyllic conditions. More photo stops... 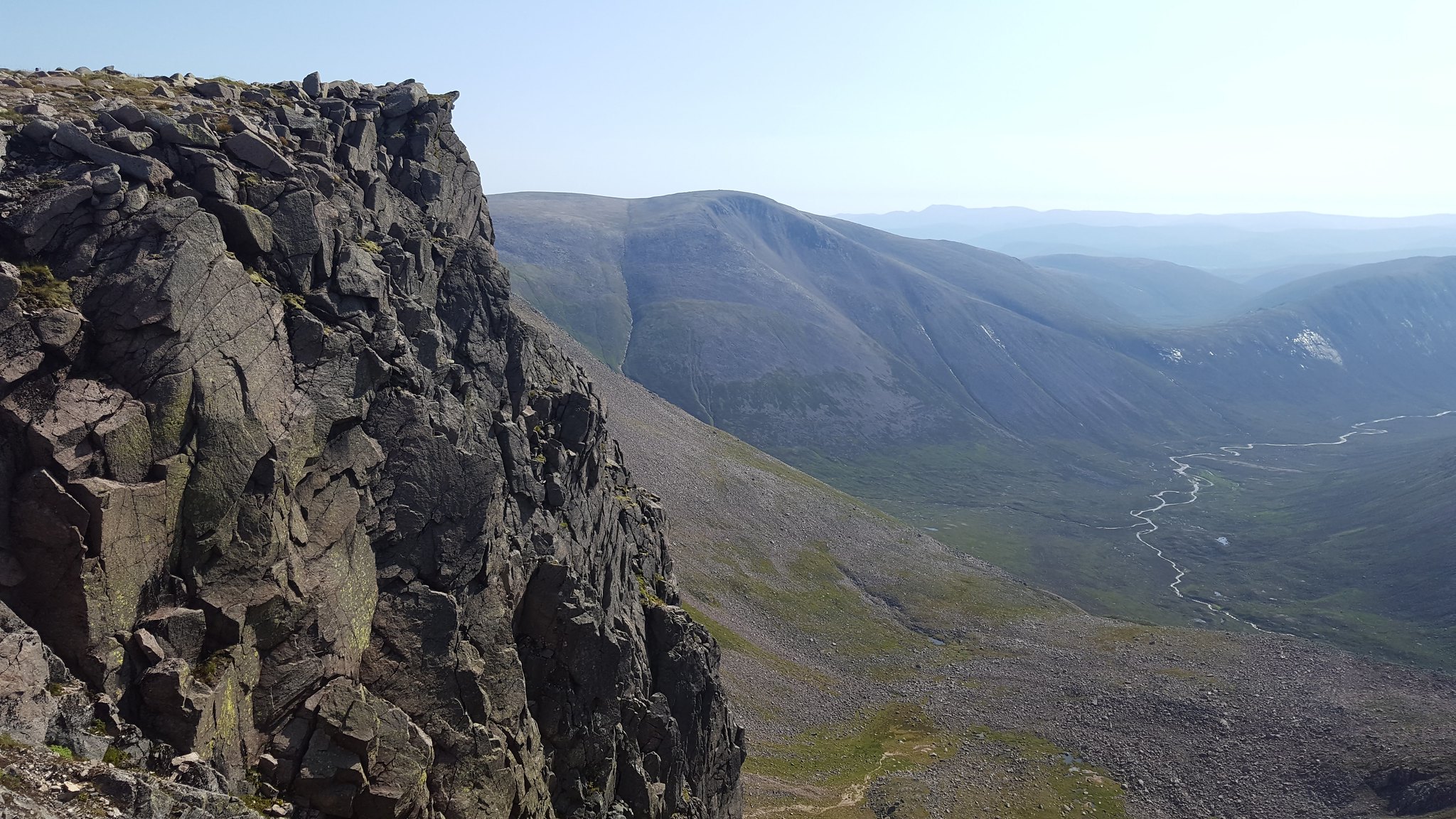 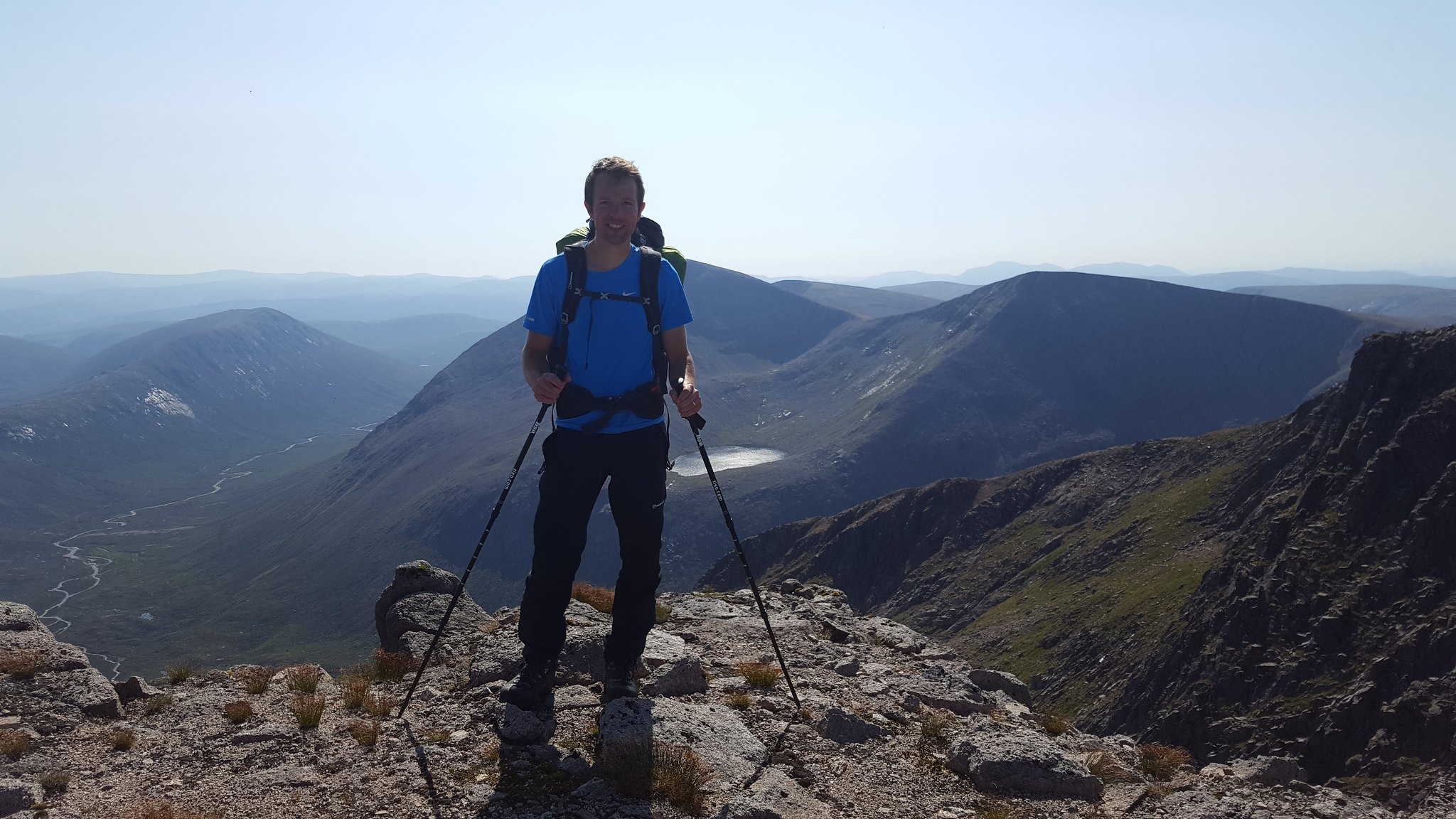 Living the dream is overused, not for me today! 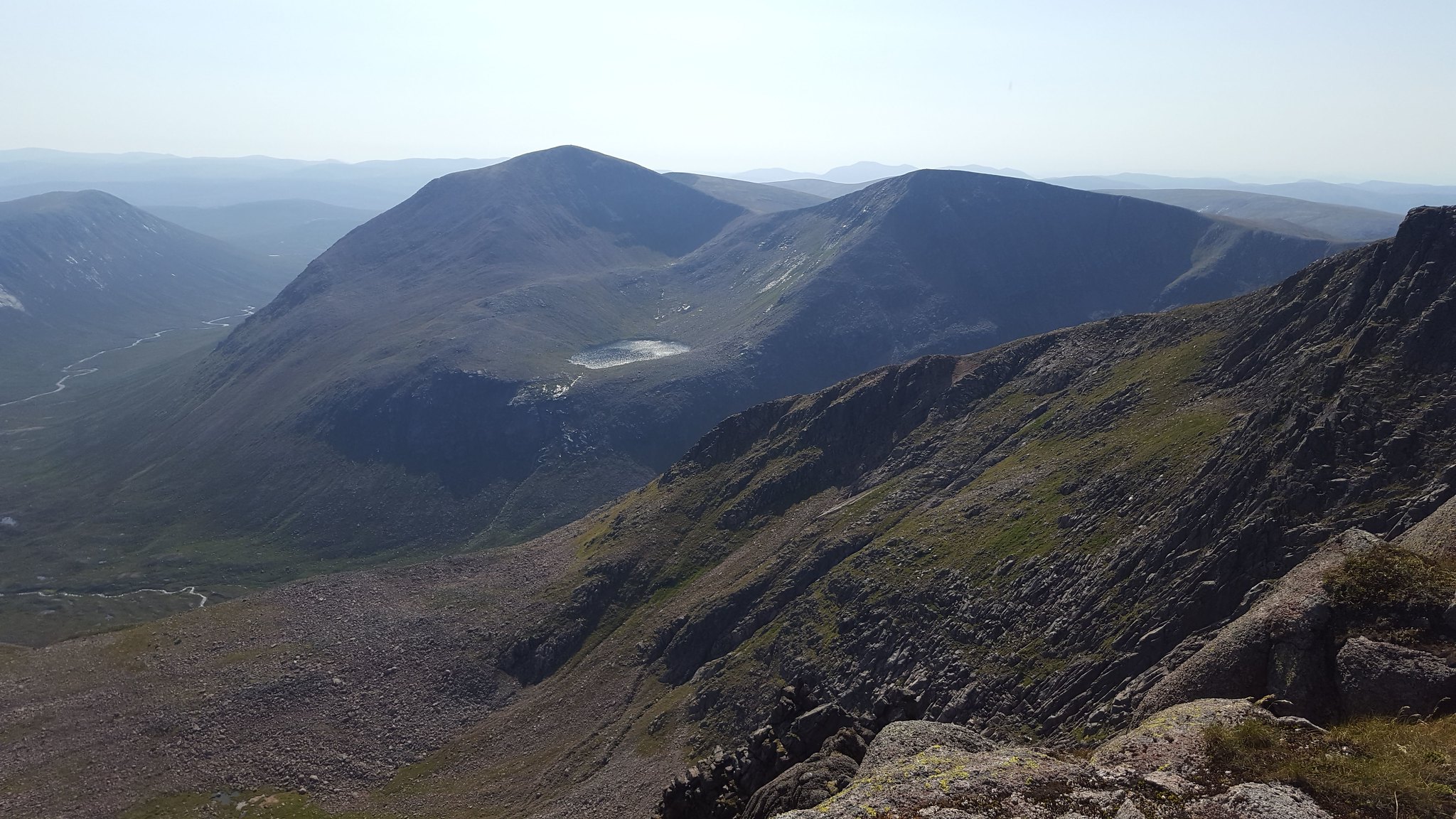 Cairn Toul without me in the way.

Probably my favourite photo of the day, panorama of the full traverse. Epic!

The summit of Braeriach was reached at 11.45am, after a long but easy traverse of it's massive bulk. We sat and took in the views, chatting away to another couple of guys from Glasgow who appeared from the Chalamain Gap direction. Our Birmingham friend was also there to talk hills with, and it's fair to say that we were all in our element looking at the amazing views. It was sad to leave, but we started the absolute trek back towards Cairn Gorm ski centre, stopping for a couple of last photos en route. 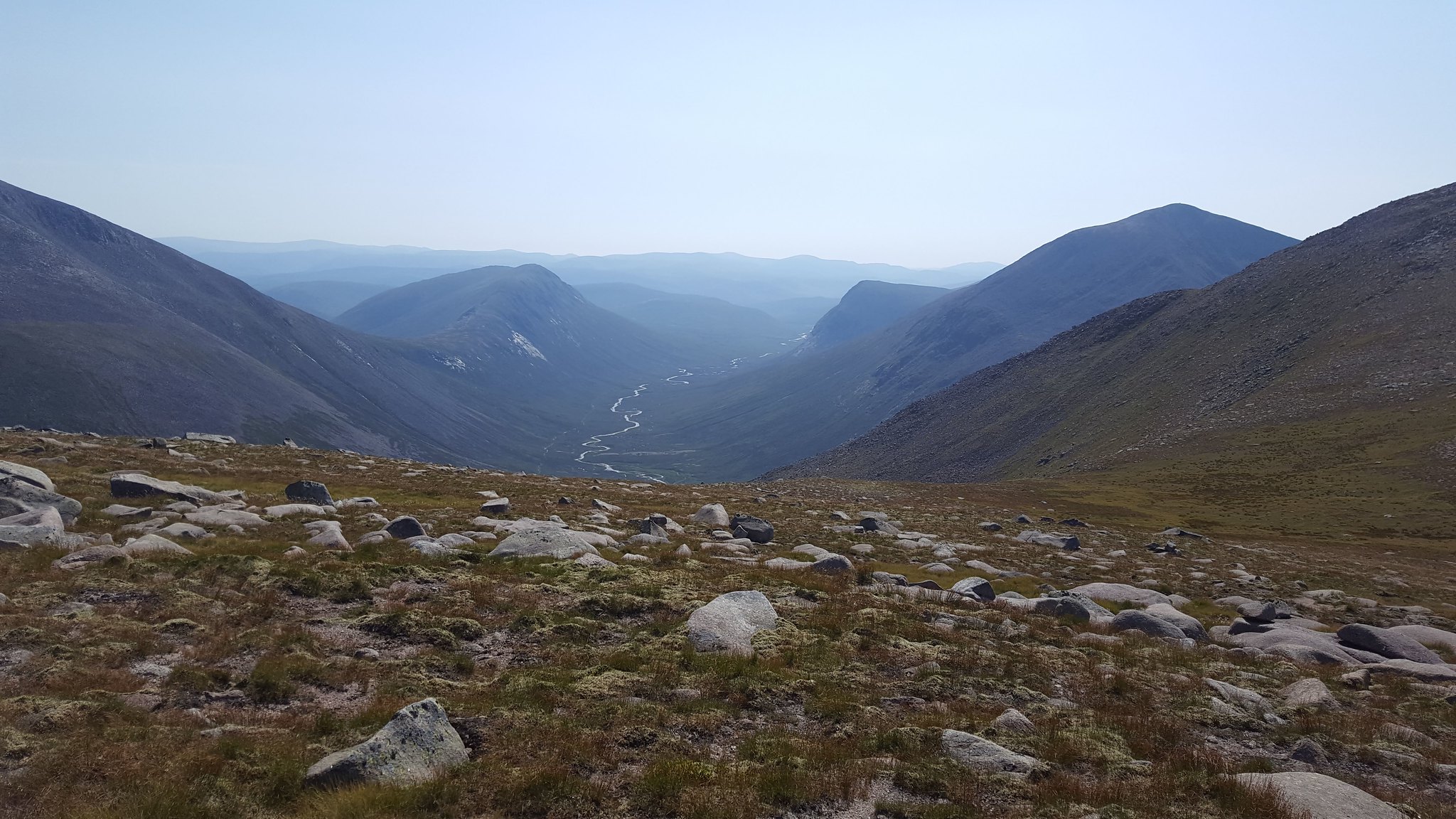 Back down the Lairig Ghru with the Devil's Point looking like a wee toy. 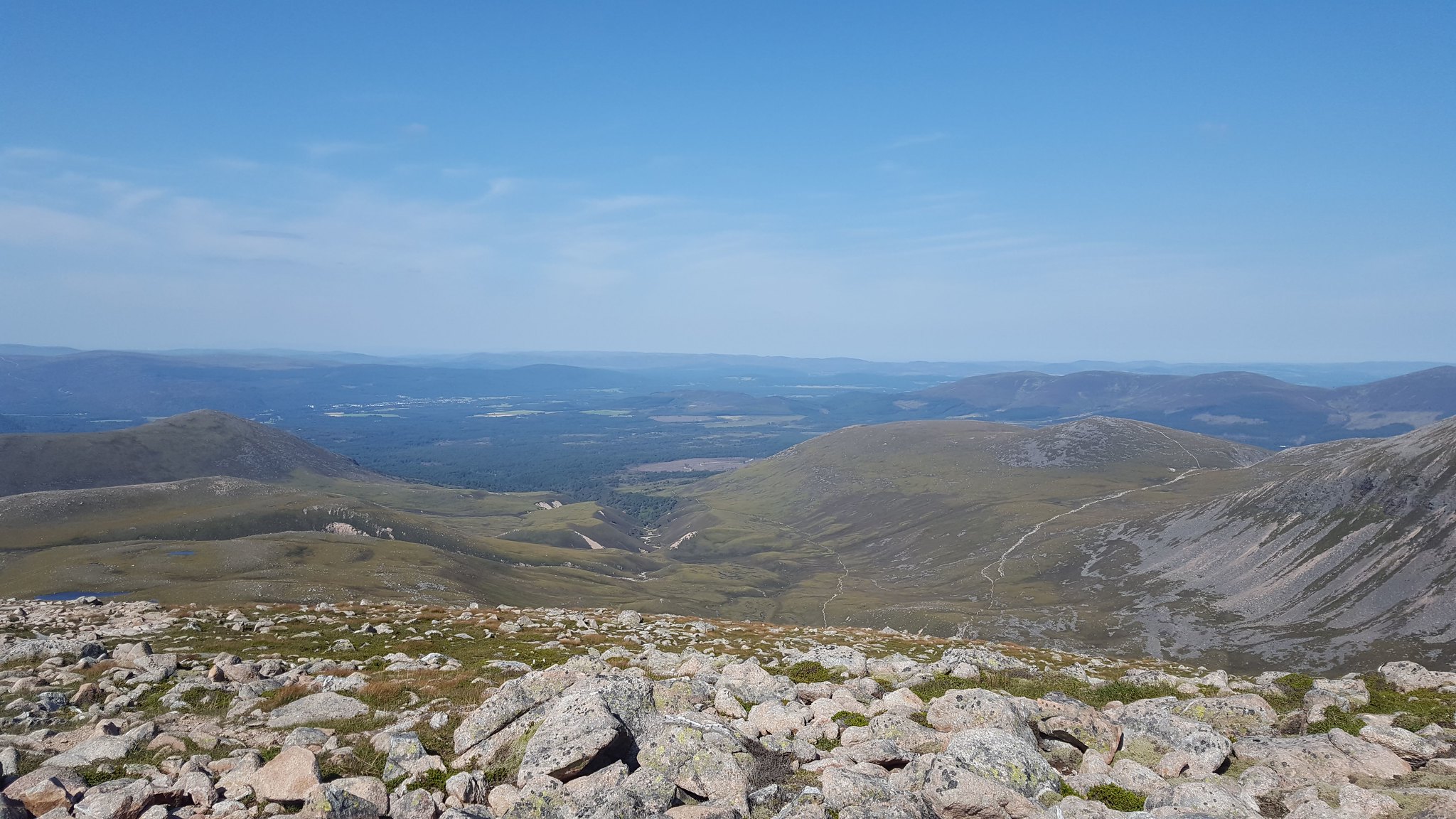 The never ending path back to the Lairig Ghru, ascent to Chalamain Gap, and beyond...

Oooft this descent is a slog. It feels like it goes on forever, and due to the massive scale of Braeriach, you walk for an hour without seeming to make any progress! Ha, luckily it was a beautiful day, but we were both running out of water and getting battered by the sun. I knew better than to complain however! Back in the Ghru, we filled up 3 bottles each of beautiful cold water, downed more on the spot, and treated my face and hair to a wash. It felt amazing! Next, the ascent to the Chalamain Gap, which is fairly steep! 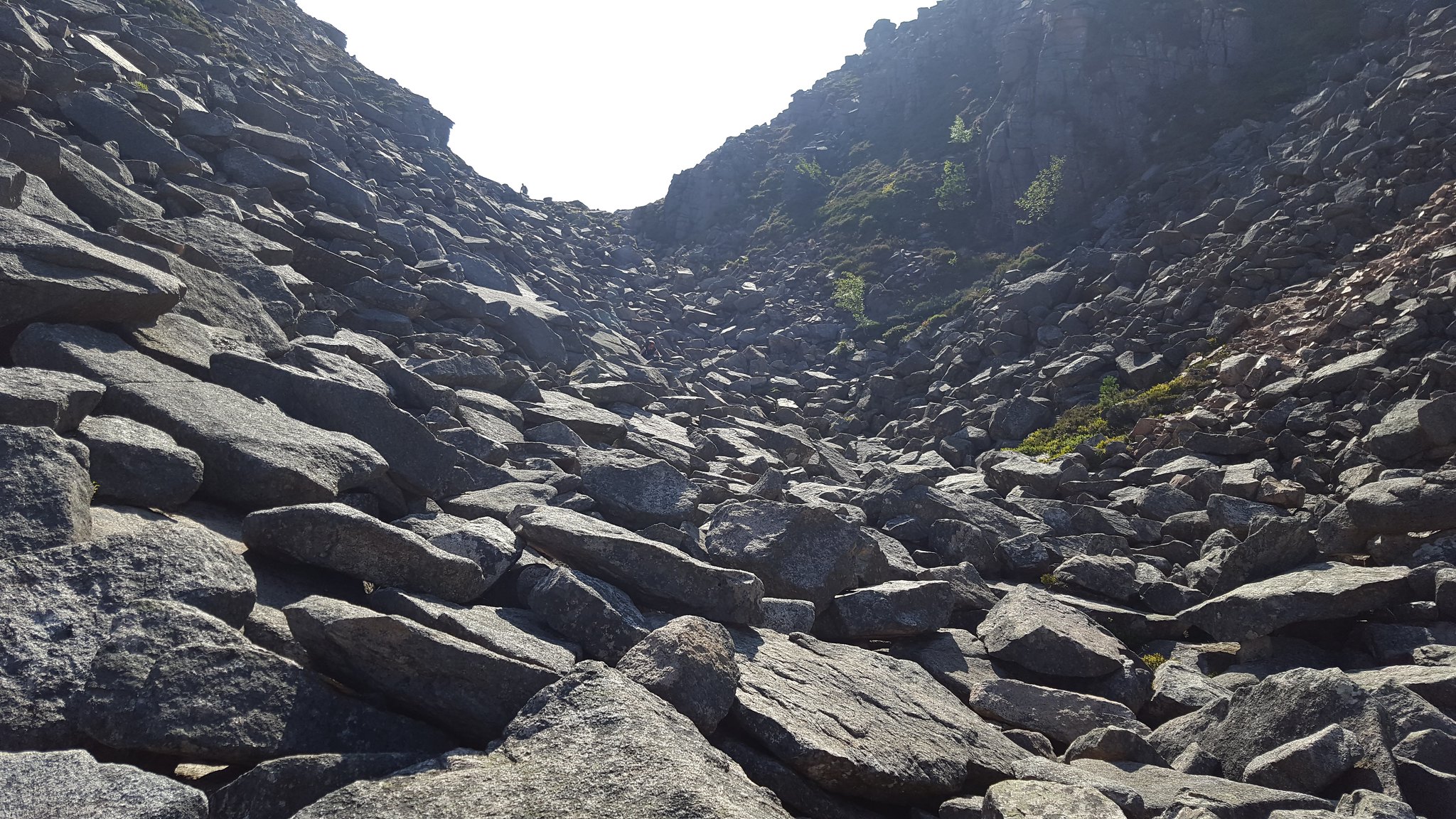 The Chalamin Gap... not exactly top of everyone's wish list after a long two days...

Eventually, after almost 4 hours since the summit of Braeriach (not all walking time, but a healthy portion), we reached the Sugar Bowl car park. The only catch was our car and mountain bikes were at the ski centre, so I dumped my pack and hiked up the road to retrieve them. I tried hitch hiking but no takers...until our fellow bealach campers picked me up 500m from the ski centre, cheers guys!

What a weekend!! A seriously amazing adventure, and one of my favourites to date (although I seem to say that every weekend now). I would highly recommend the 4000ers to everyone, just leave early enough to camp at the Devil's Point bealach and not at the bothy!

Final shout out to the Visit Cairngorms Facebook/Instagram page, who shared my photos of the weekend on their social media pages (@jimbell21 is me).

Re: The Cairngorm 4000ers on a hot August holiday weekend.

Re: The Cairngorm 4000ers on a hot August holiday weekend.

Thanks, just clocked your comment. One of my favourite trips that, awesome couple of days!