Weather forecast not too good today - the weather fairies must be on holiday ! GC was at a funeral, so it was just Harvey and me.
Drove down , passing the massed workies queued up to get into Aberdeen at the back of Stoney. Took the quick route through Kirriemuir then out by Kingoldrum and Dykend. Missed the turnoff to Freuchies and had to trun around. At Freuchies, I continued on the tarmac until at petered out into a forestry track - obviously well used by the folk up at the Glenmarkie Lodge and farm. I drove up the track to find a place to turn round, but there was none until the road forked, so I just parked up there as there was plenty of room.This was very convenient - right between Crock & Hare Hill. Just a wee smirr o drizzle. Found out what the smell in the car was - I hadn't taken my wet fleece in to dry from last week so it was honkin'. Being practical, I just shoved it on, as rain was forecast - no point in getting another fleece wet !
Strode off down the track humming and across the bridge to find the "dead tree" mentioned by Coinneach on HB site.

HARE CAIRN
A buzzard flew off from the dead tree as we approached, and richt enough there was a grassy track left by a forwarder during the last clear fell in the middle of fairly newly planted conifers. Jist a wee bit overgrown wi grass.
The blaeberries were a-plenty, so the grouse must be fat ! I also guzzled a few on the way up - lovely. 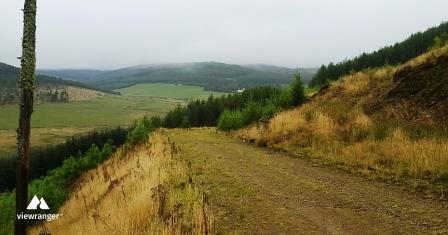 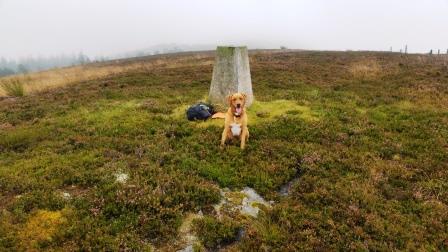 Harvey at the Hare Cairn Trig Looking up Glen Finlet to Glenmarkie lodge from Hare Cairn

Almost straight to the top. Wandered over to the Trig and had a piece. Quite claggy and damp, so no views. Down the same way and back to the car for "lunch".

CROCK
I hadn't read anything in the ether about the best way up, so walked up the forest track for a bit then did the same as Coinneach and threaded a route up through the mature trees, breaking out on to the ridge then picked up a path to the top and a wee cairn. Again, nothing to see, so a bit disappointing. However, the rain hadn't materialised yet, so we only stopped for a short while then headed down. This time tried the edge of the mature forest, but it was a bit jungly at the top, so broke out into the young larch and pine and threaded a way down to the track and back to the car. A 4x4 was parked in front of me, so I braced myself for a "dressing down " for wearing out their potholed road - but there was no-one in the vehicle. Drove off sharpish and escaped to the north with my lugs intact.
Stopped briefly for a photoshoot at Kingoldrum to show my good lady how it had changed since she lived there.
Drove through a number of rain showers on the way home, so glad we escaped a drookin.

Users browsing this forum: No registered users and 128 guests