our_route.gpx Open full screen  NB: Walkhighlands is not responsible for the accuracy of gpx files in users posts
As munro baggers from north Wales who have visited most of the summits below Fort William we can't just head for the highlands on a sunny day, and have to plan well in advance. So after an abortive trip in May (when the van broke down en route) we planned to visit again in August, and as the date neared and a yellow weather warning was issued for the area we were headed we were not going to pull out.
Driving up on Friday afternoon with windscreen wipers on full blast and the wind blowing the car from side to side, the only concession we agreed on was to cancel our plan to sleep under canvass and booked a hostel in Inverness (southern softies!).

Saturday dawned wet and misty, and we drove to Struy in driving rain and steering around the flooded sections of the road I steeled myself for a pretty uncomfortable day in the hills. We arrived at Milton cottage at about 10am to collect our ticket before the drive to the start point. We started walking just after 10.30, initially following the defined track uphill . As the track became narrower it also became wetter underfoot, until we were walking up a fast flowing stream.

After about a kilometre and a half the track crossed the river, but the crossing was totally impassable with the river a raging torrent, so we continued up on the eastern side of Allt Coire Mhullidh and then Allt Freumhach hoping to find a spot to cross higher up. This meant climbing up through tussock grass and heather (all thoroughly flooded), requiring more energy expenditure than we should have had to exert.

After crossing the river we struck a line for the bealach between Garbh-charn and Sgurr na Rhuaidhe then climbed steadily to the eastern shoulder and then a short climb over boulders to the summit, arriving at 12.45, where we grabbed a quick bite. 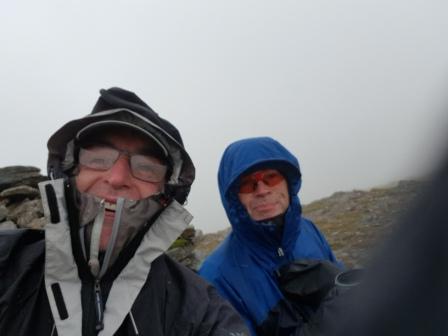 Heading off again we descending north west to the bealach nam botaichean, and then started the steady pull to Carn nan Gobhar. 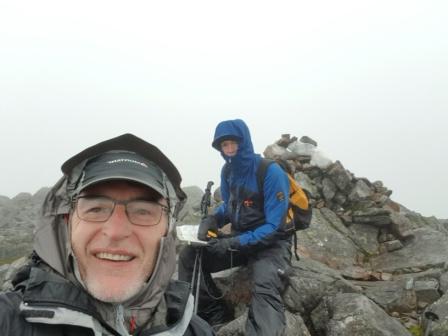 At this point I was absolutely soaked through, and with the wind chill I was very cold, especially my fingers, so we didn't hang around and set off for our next summit. Initially we descended south west to the Bealach Sneachda and then climbed to Sgurr a Choire Ghlais. On arriving here the weather improved a little and we actually had some views, but I was still very cold and keen to get moving again. 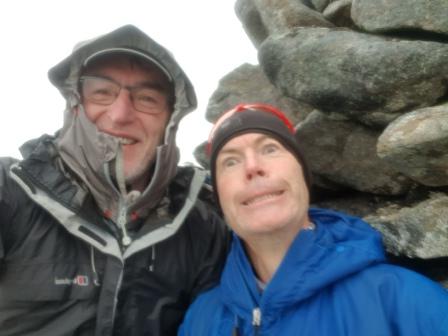 By the time we reached Creag Ghorm a Bhealaich I was warming up a little as the rain had eased off, but the clouds were rolling in again, so we wanted to maintain a good pace to get down before it started raining again, so pressed on to our final summit of the day Sgurr Fhuar-thuill. 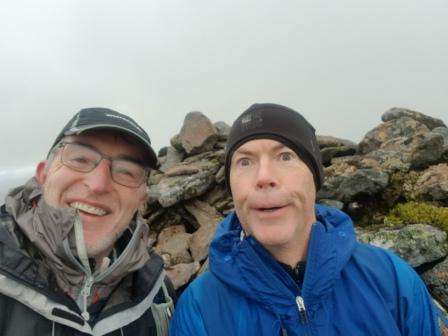 In our haste to descend quickly, we missed the track heading down towards Loch Toll a Mhuic (it is marked by a small cairn). The descent down to the loch was not too steep, but when we reached the crossing point of the Allt Toll a Mhuic it was totally impassable due to the raging torrent, so we were forced to stay on the eastern side trudging through sodden heather, and then it started to rain again. Eventually we came to a bridge than allowed us to cross back to the track and continued our descent. As we neared the roadway the weather improved markedly and it was actually quite pleasant as I wrung the water from my gloves.

Even in the good weather I wasn't looking forward to the long walk back to our car, and after only a couple of minutes a car came along. We stuck our thumbs out in hope and thankfully the driver pulled up, and despite a car full of walking gear and a bike we managed to squeeze in and enjoy one of the best car rides I have even had (to the driver of the car - if you are reading this you are a star!). At the car we changed into dry clothes - I put all my wet stuff into a bag and it must have weighed at least a stone (not including my boots). I'm hoping we have a little better luck with the weather for our next trip.

I bet they didn't give out many permits that day...

Well done for not cancelling!