The forecast was good and it was a Saturday so I didn't meet the usual early morning delays as I circled the Edinburgh bypass to the A7 on my way to Langholm and my first objective. I parked where others had and followed much the same route noting as I did that my first steps took me over a cattle grid and past some pens using telephone pole sized supports. 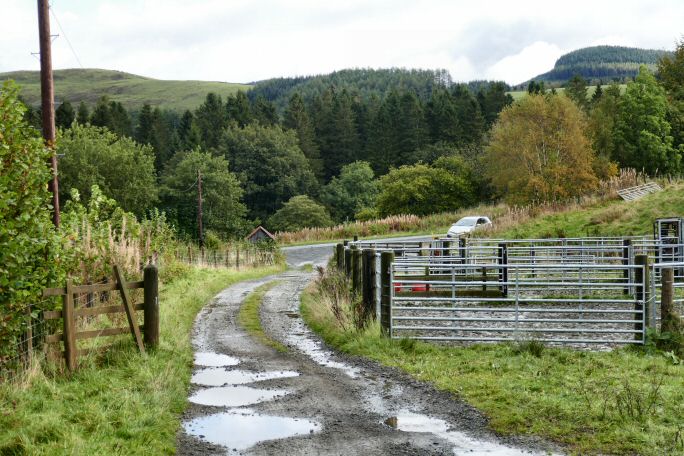 So I shouldn't have been surprised to see a sizeable black quadruped staring curiously at me from the top of the slope as I walked below the buildings at Old Hopsrig. There followed another cattle grid and a gate covered in warnings that Fife Flyer had photographed 18 months earlier for his report and were unchanged. Warning notices that were unchanged from April 2018.

I was then back among sheep and later a sizeable flock of pheasants at Calkin as I gazed down at the cottage. The few remaining pheasants after the rest had flown.

Most had flown by the time I got my camera in action. Following the upper track to near the forest gate I had thought of following the ATV tracks that looked obvious on Google Map's satellite view. The head of the ramp from the track but no ATV track in sight.

When I climbed the ramp up onto the hillside and ducked under the barbed wire strung across the gap in the fence, there wasn't one to be found. Perhaps like crop markings they need the right weather conditions to be visible. The ground wasn't covered in tussocks and was quite easy going, so I didn't waste time searching, but headed upwards and moved across to follow the fence. This did eventually lead me to an ATV track that I followed for most of the remaining 300m to the summit ridge and the gate in the fence. From there it was only a few minutes to the three or four sticks poked into the ground marking the top. Since it is almost entirely surrounded by forest it isn't a good viewpoint. It's not the worst - but I was meeting that later! On the return trip I tried to follow the ATV track all the way down, but it faded away and I just headed back for the ramp down to the track. Then it was a gentle stroll back to the car with no pheasants or cattle waiting to be photographed and objective number two, Grange Fell, waiting 24 minutes away according to my SatNay.
.
Grange Fell - 1.2hr, 3.2km, 180m

I had one worry about this hill - where to park. Fife Flyer hadn't found a good parking spot and my Streetview journeys up and down the road hadn't seen one either. I had read of one, but though recommended and used by several walkers it didn't look probable. The reports mentioned that it was possible to 'park below the trees' a few metres along the minor road that leaves the B7068 150m south of the field gate that is the usual starting point for Grange Fell. Fingers crossed I drove there. 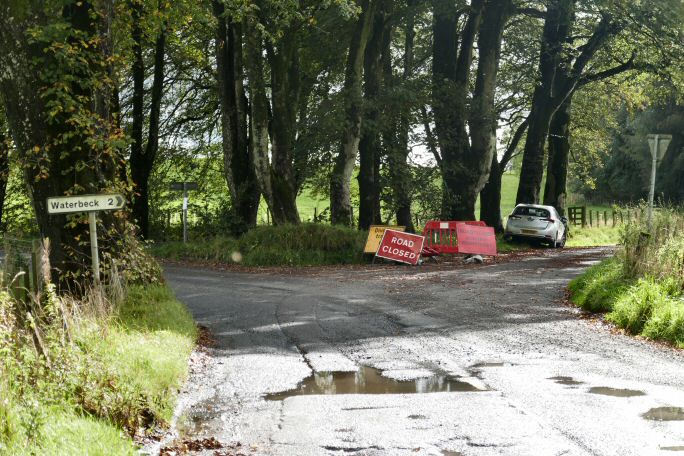 When I arrived I found a ROAD CLOSED sign at the junction. Problem solved. All I had to do was park on the road behind the sign. Then I found that if I'd wanted I really could 'park below the trees'. Drive between the two trees to park well off the road

Most of the area under the trees at the junction between the two roads is hard standing. There is enough room for several vehicles to park, though the entry between the two trees is only wide enough for one at a time to get in or out. This is one of the quickest Marilyns I've climbed for some time, but not as straightforward as expected. One wee difficulty was about half way along the track that zig-zags up the hillside. I started through the field gate and down to the bridge across the Kirk Burn to continue along the track as it climbed up the hillside. As I approached the first hair-pin I realised that I wasn't alone on the track. 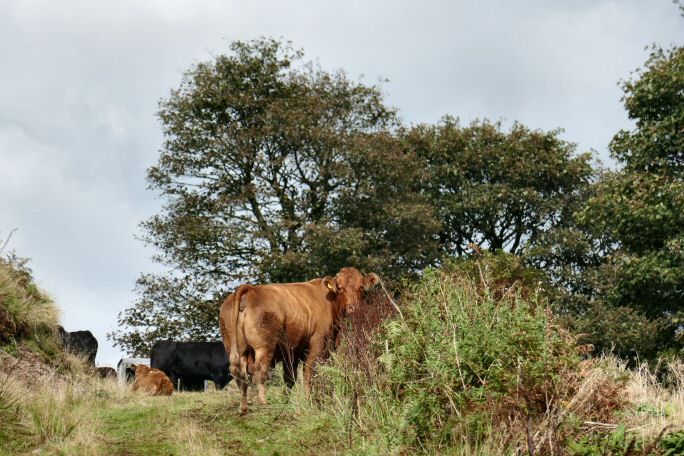 Meeting the residents at their cafe

I was being observed, and as I slowed to a stop, the crowd on the track started to move up it. Not wanting to herd a herd all the way to the top I slowly moved a short distance to where an easy clamber up the bank took me past the corner and above the entire herd. Another problem solved, though perhaps leaving one for the return journey. The next possible difficulty was finding the trig point when most maps showed it surrounded by forest.

My route through the maze Heading into the forest

A little forward planning had provided me with the satellite view from Google Maps which led me through the maze without any difficulty. I did have to divert around a toppled tree, but only one this time. The trig point at the centre of the maze

At the centre of the maze the trig point had a 360 degree view of - trees, trees, trees. For variety I navigated out along a different route - no fallen trees this time. 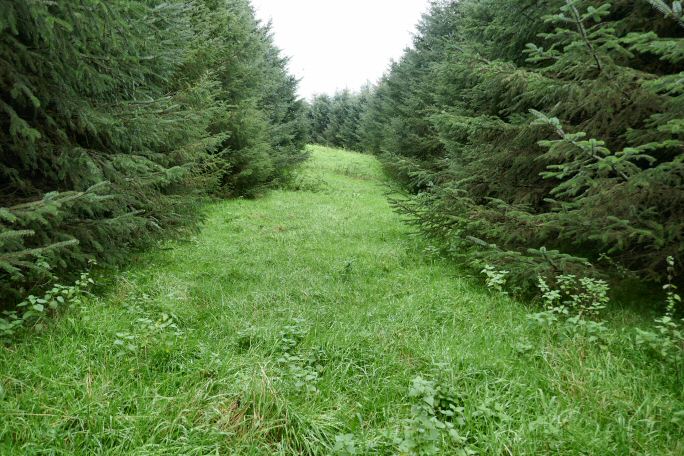 The main ride through the forest. Heading for the edge of the forest 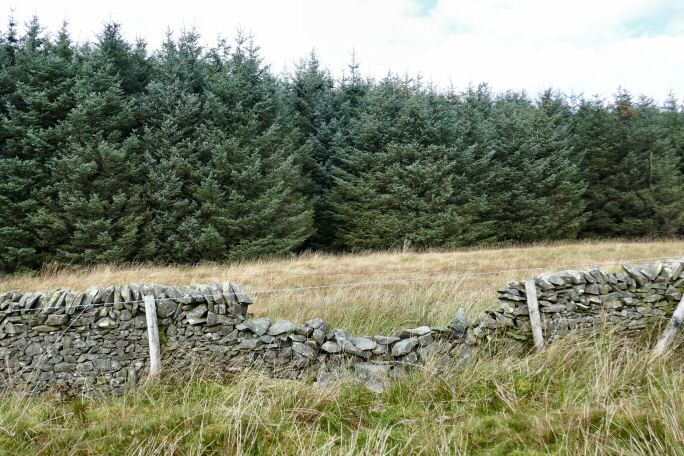 For my descent instead of using the track I avoided any possible bovine issues by heading down Ennie Gill. Starting down beside Ennie Gill

The ground bore plenty of evidence of trampling hooves, but the field was uninhabited and would provide a reasonable uphill route if the usual one was heavily occupied. The tree shrouded Ennie Gill. I ascended the track to the right and descended to the left of the trees.

For variety I returned to Edinhurgh via the A74, Carstairs and Forth. That took almost exactly the same time as my morning journey despite being three miles longer. Another fine warm day when once again I met precisely zero other walkers, and this time not even a single local - apart from the animals. There had been no need for the jacket I'd lugged around in my rucksack and apart from some 'soft' going under the trees I hardly got any mud on my trousers and finished with dry socks..

Great report and thanks for the mention, we seem to be gathering up the Borders Marilyn's between us. I have been using quite a few of your reports for the ones further south. Parking is always a challenge and it is just as well the Borders hills aren't popular yet.
Only 15 hills left to visit down south now, drawback is they are all round Dumfries which is the best part of a 2 hour drive, I plan to pick them off on my return trips down to Englandshire.

Fife Flyer wrote:Great report and thanks for the mention, we seem to be gathering up the Borders Marilyn's between us. I have been using quite a few of your reports for the ones further south. Parking is always a challenge and it is just as well the Borders hills aren't popular yet.
Only 15 hills left to visit down south now, drawback is they are all round Dumfries which is the best part of a 2 hour drive, I plan to pick them off on my return trips down to Englandshire.

Yes we do seem to be chasing the same objective and I've been treating your reports - and Inca's - as essential reading when planning my trips. I've nine left to visit down in Galloway (plus a couple of Donald tops) which means I'm likely to be supporting the local economy more with B&B stays, provided the Met Office co-operate by predicting some nice long spells of good weather. .

Two enjoyable hills. I approached Grange Fell from a back entrance to Grange Farm, just past the main quarry entrance. Resolved the parking issue, as plenty of space. But oh the brambles, nettles and self down Christmas trees on the walk. First hill I'd done in shorts and ripped my shins to pieces 😂