Purists can look away now! I am not a keen cyclist by any means, but there is a lot to be said for a good cycle out downhill after a day in the hills, and also I'd rather carry the camping gear by bike than in a rucksack.
So we planned a trip of "walk and cycle", or "bike and hike" if you prefer, tackling the five munros between Loch Lochy and Glenfinnan, and starting at Loch Lochy.
We left the borders (Shish's house) on Sunday morning and drove to the small parking area at Kilfinnan. Weirdly enough, Google maps thought the best route was up the Western side of Loch Lochy, and we were amused to see a laminated notice on the gate at the start of the track saying "GOOGLE MAPS IS WRONG!"
We left the car about mid-afternoon and it was a pleasant cycle through the forest to the start of the path uphill. You have to be a bit careful of the odd bramble shoot threatening to attack your tyres, but the brambles were fat, ripe and delicious. The track goes uphill at a steady pace then there is a long downhill section and just as we were beginning to think we had gone too far, we spotted the welly boot at the side of the road which indicates wehre to stop. 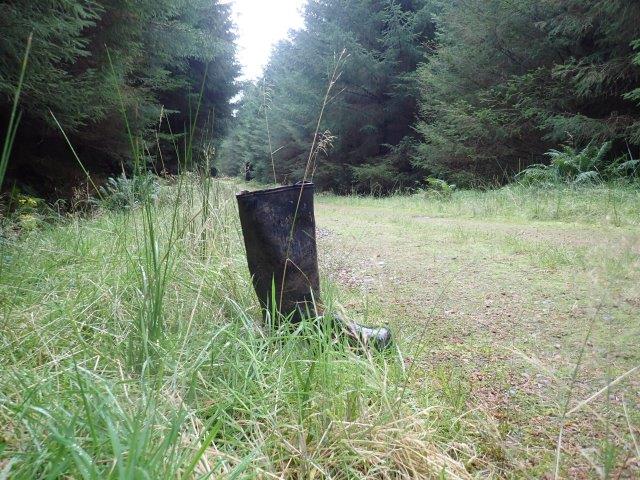 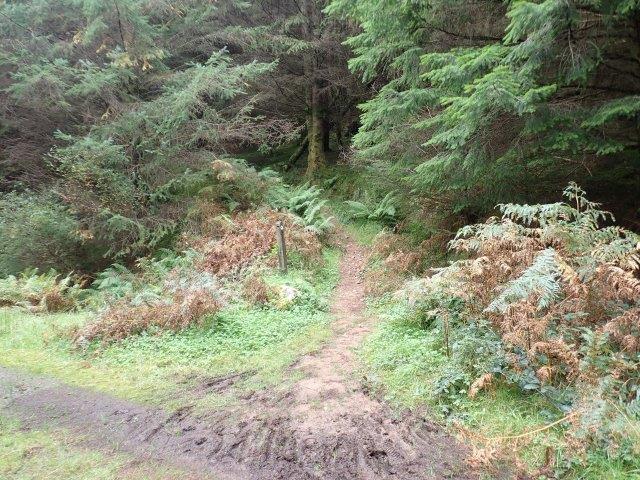 and more importantly, the start of the path.

We stashed the bikes in the wood, transferred the camping gear from panniers to rucksack and set off through the woods.
It was quite muggy and dark in the woods and the path is steep at first, but it soon comes out into the glen where the path climbs at a nice steady pace. We could hear the roaring of stags from all around. The cloud base was fairly low, and we couldn't se any deer at all. the path near the top of the forest 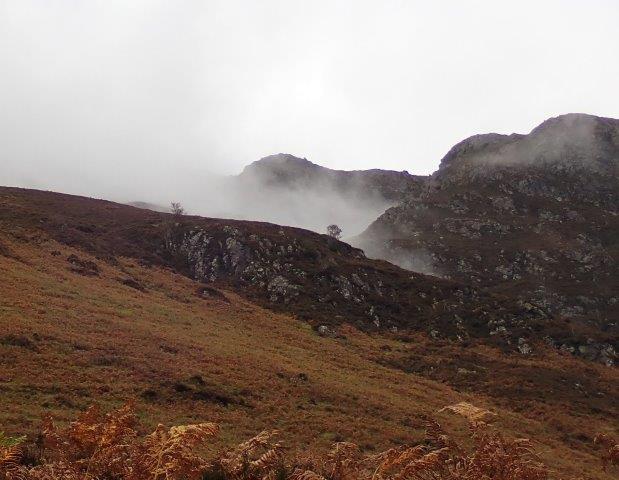 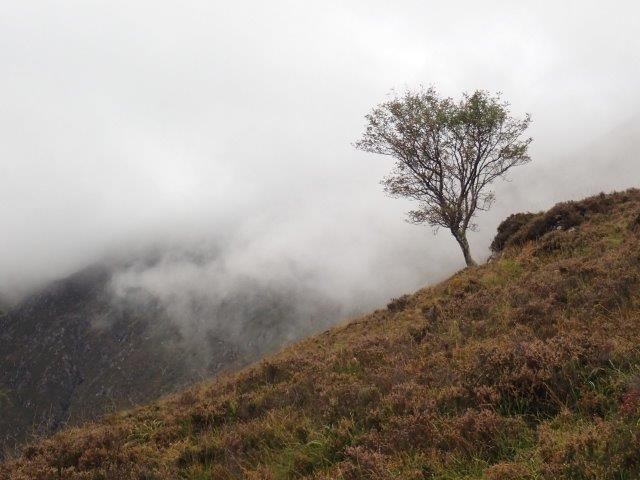 We arrived at the bealach about sunset time. It is a narrow, boggy bealach but there was just enough flat space to pitch one tent so it was just as well we were the only idiots wanting to camp! It was still and there were about half a dozen midges, come on boys, that is just unreasonable on the 29th September!! I was beginning to regret the saving of about 50g of weight by not bringing the Smidge, but then a wee breeze came up and blew them away.
By the time we had eaten our tea it was quite dark so we got a nice early night; I think we were both asleep by 8.30pm!
In the night we were woken by a stag roaring very close to the tent, which was quite exciting!
There was rain on and off all night, and we woke up to clag, which is not what we had ordered. We decided to leave the tent in the hope that it might clear up and we could pack it away dry.
We set off up Sron a'Choire Ghairbh where there is a nice zigzag stalkers path giving a very pleasant plod plod gradient, and it was not long before we reached the summit. Unfortunately there were no views to be had so a quick photie and back down to the tent, by which it was time for elevenses. 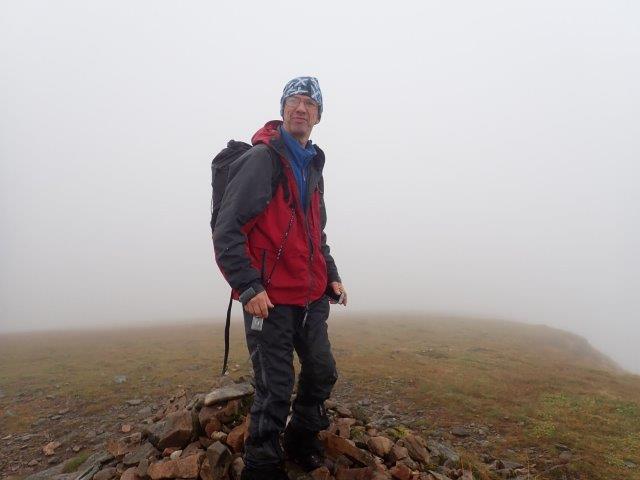 Rudolph on the top of Sron a' Choire Gharbh 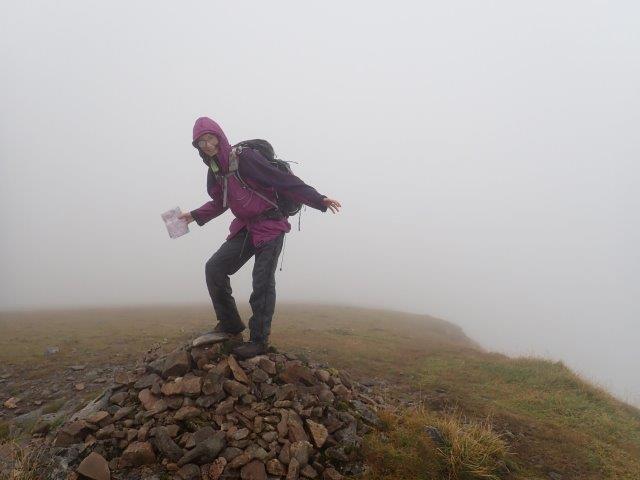 and me. Trying to do a Jaxter pose with both feet on the ground. It just looks silly.

By this time the clag had lifted off the bealach but the summits were still covered. However another hour took us to the top of Meall na Teanga. There's a muddy section around the side of Meall Dubh but after that it was a very pleasant climb and by the time we got to the top, the cloud had lifted enough that we could call it could-free (although no extensive views unfortunately). 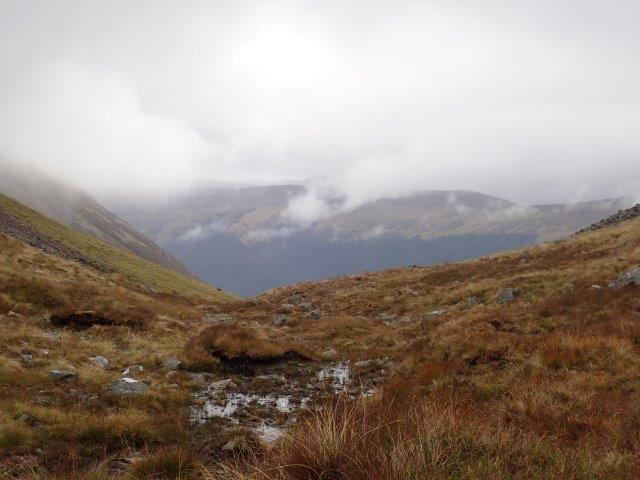 Starting to clear up 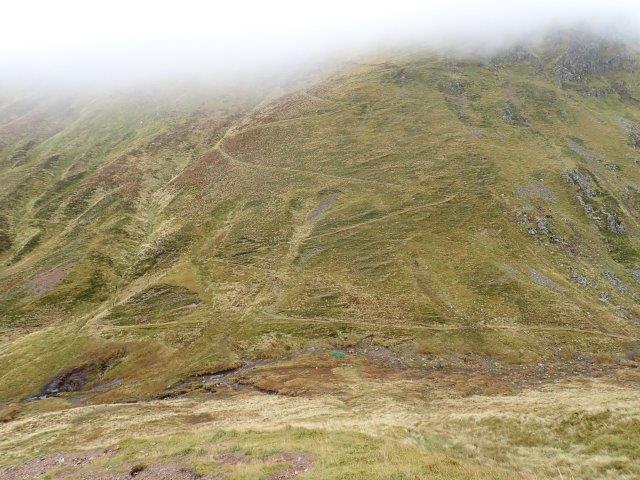 Looking back to the zigzags up Sron a'Choire Ghairbh 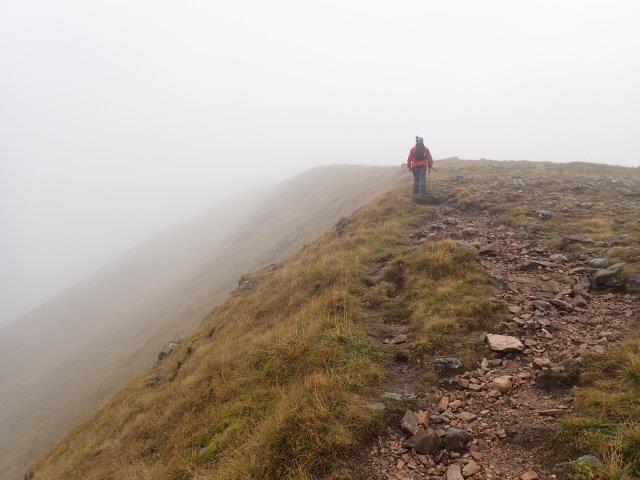 into the cloud again 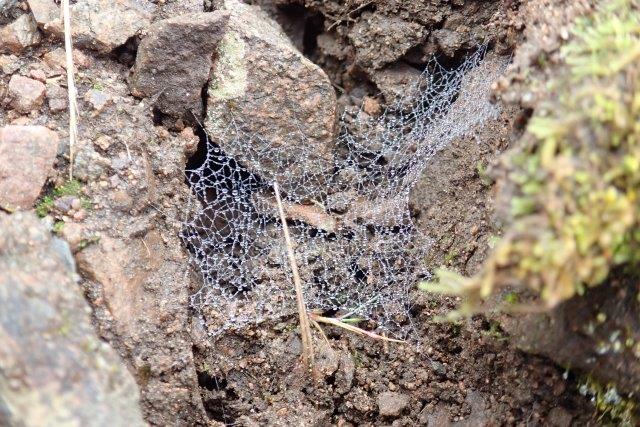 diamond-spangled cobweb (aka I need a breather) 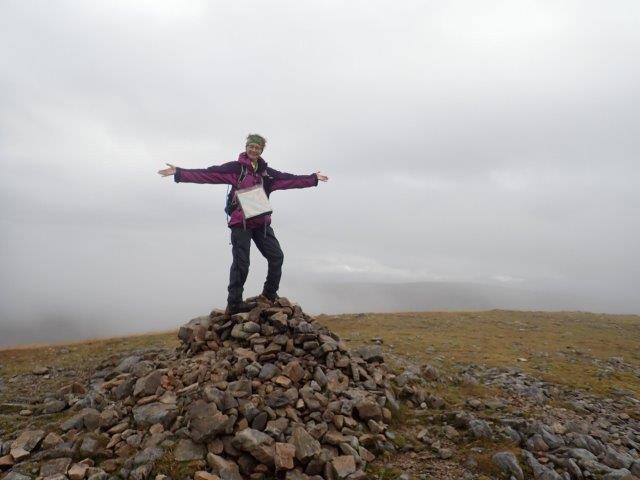 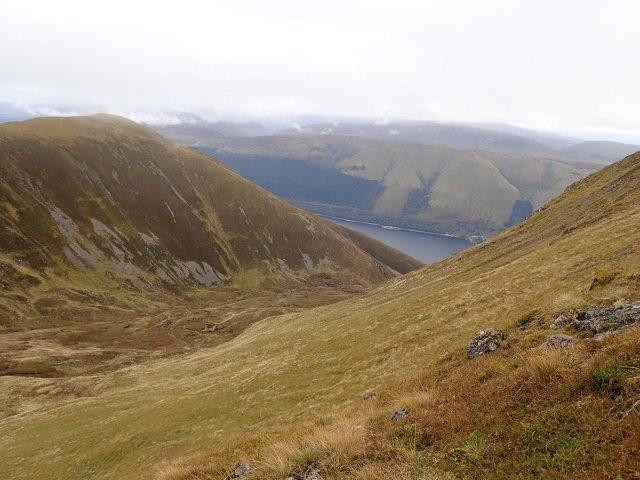 As we had hoped, after another brew and some lunch, we were able to pack the camping gear away all dried and aired, and as we descended the weather kept on improving. 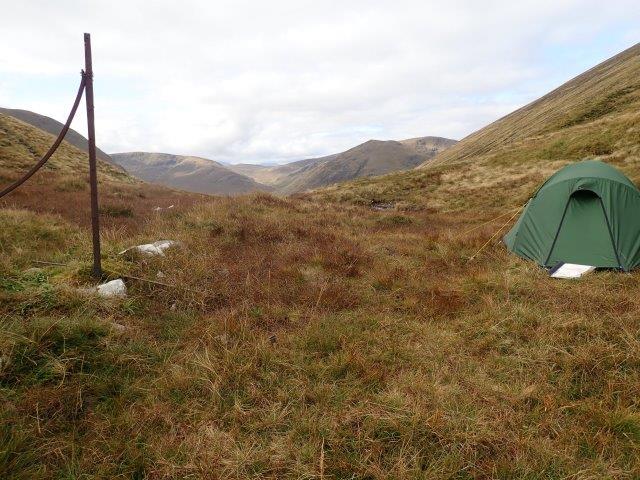 back at the bealach 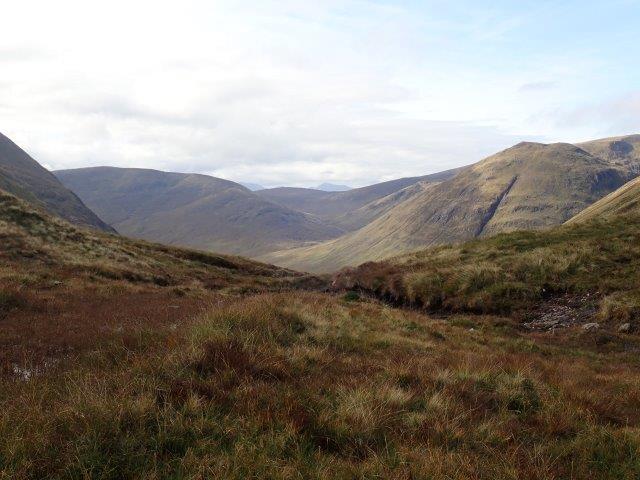 looking west from the bealach to some more hills

We felt a little smug as we were speeding down the hill on our bikes to pass a group of young lads pushing their bikes up; we oldies had cycled it without getting off!
And since we did not have many views to show off, here are some wee pictures of flowers. heather hanging on in there 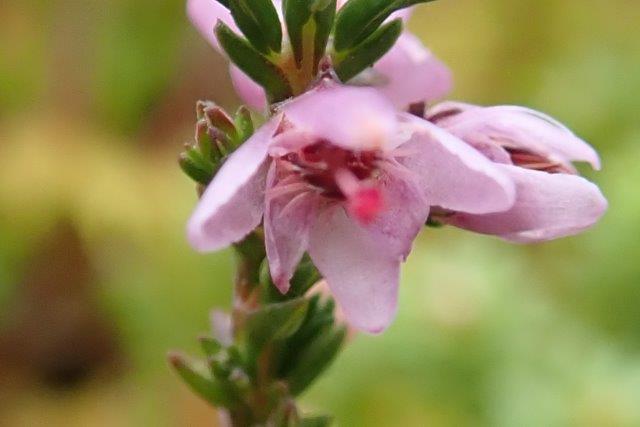 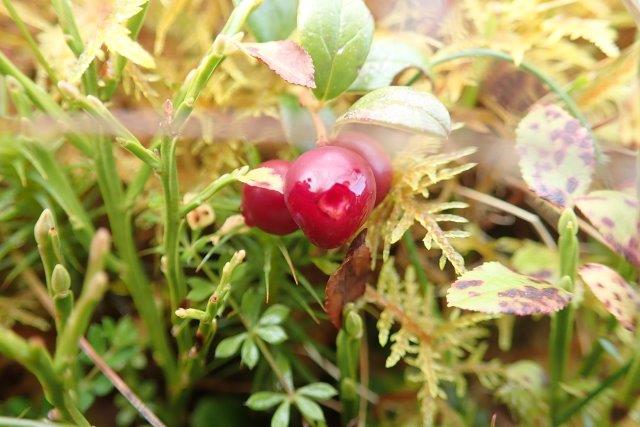 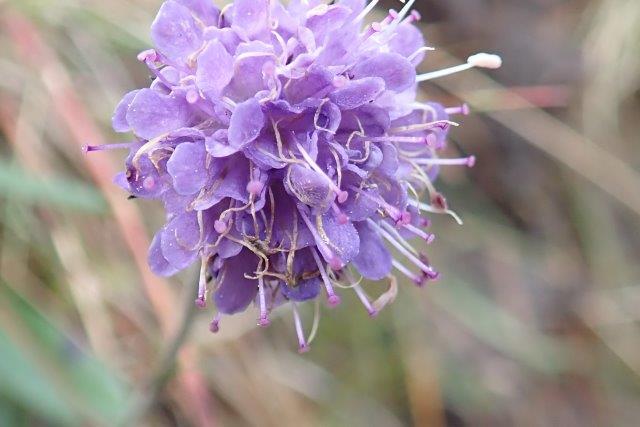 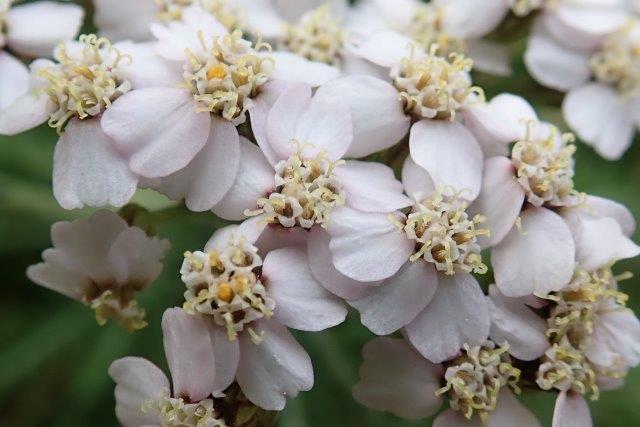 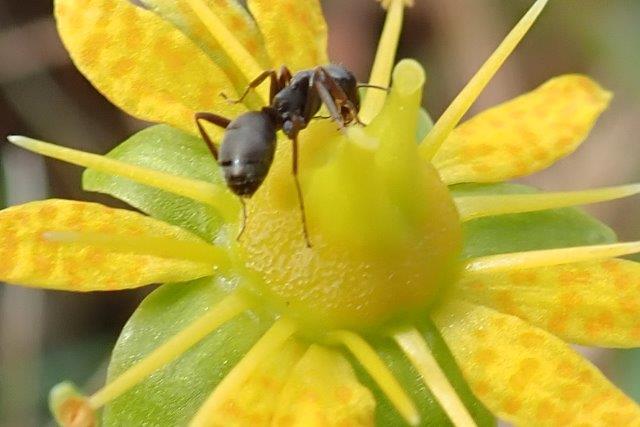 an ant on a little saxifrage

So back to the car, and off to the next adventure, Glenfinnan!

Great photos - enjoyed the flowers! Looking forward to TRs of the wilder west!

Bikes are great for this pair,I cycled also,locked the bike up,then couldn't unlock the chain when I got back

Thank you. I like flowers, they don't run away when you get close!

gammy leg walker wrote:Bikes are great for this pair,I cycled also,locked the bike up,then couldn't unlock the chain when I got back

Nooooo! We did have a wee moment back at the car when I thought I had left my wee drybag with the car key in it at the bottom of the hill path - then I found it.

Lovely pics and some very nice closeups of the flowers! Just off to say hello to these 2 hills tomorrow.

Jan Vi0la wrote:Lovely pics and some very nice closeups of the flowers! Just off to say hello to these 2 hills tomorrow.

Hope you got some views!

I somehow managed to miss this first time around; but good to catch up. And to see bike and hike catching on!

I too had a good deal of mist when I walked these, though of a different character, it being mid-winter.

The zig zag path down from Sron a' Choire Ghairbh show up just as well in the snow!