We'd been playing hide and seek with thunderstorms all week in Kintail and on Skye, and so far, we seemed to be winning. Most days we'd erred on the side of caution and opted for low level walks where we'd never been too far from the car - but it had mostly stayed dry, leaving us wondering whether we should've gone for something more ambitious. Yesterday we'd finally gone up an actual hill (the Corbett of Sgurr nan Airgid), as it was doable in half a day. Yet still the thunderstorms didn't arrive! So with a similar forecast today, we decided to go with something just a tiny bit more ambitious: the horseshoe of three Red Cuillin summits west of Broadford. This was still a relatively short route, but as a ridge walk it was a bit more exposed than the previous day's hill.


Beinn na Caillich.gpx Open full screen  NB: Walkhighlands is not responsible for the accuracy of gpx files in users posts

It was another gorgeous morning as we parked by the road end at Corry. No-one else here, and indeed we didn't see another person all day, despite it being a bank holiday weekend! We'd been expecting a completely pathless ascent, but in fact there's now a faint path just at first, helping with the heather hopping at least for the first few hundred metres. The first summit - Beinn na Caillich - didn't look too difficult to reach, but its dome shape had the effect of making it look easier than it really was... Once the path had fizzled out it was a real slog across deep heather and moss which concealed a scattering of uneven boulders, making for difficult walking conditions. Finally the heather was replaced by a steep boulderfield, which was more interesting but still hot work in the morning sun. We generally kept on the right side of the photo below, with views to the right into the impressive Coire Fearchair: Improving views back over Broadford Bay as compensation, however: 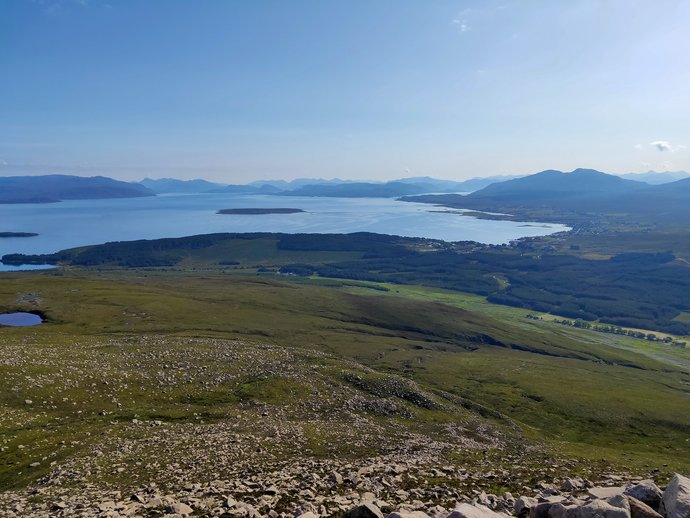 Back wall of Coire Fearchair: Eventually the gradient began to relent and we popped out at the massive summit cairn of Beinn na Caillich - the highest (but still only a Graham) summit of today's round: If this was the main course, the dessert and petit fours of Beinn Dearg Mhor and Bheag looked equally tasty: I'd always thought of the Red Cuillin as a compact hill group, but looking west over the rest of them you can see they're quite a sizeable range. Note the clouds already starting to build: The Black Cuillin were poking out behind Beinn Dearg Mhor, but there were better views of them from the next summit. Beinn Dearg Mhor in full view - next on the circuit: Looking across to Beinn Dearg Bheag: Looking back along the graceful west ridge of Beinn na Caillich: The ridge up to Beinn Dearg Mhor seemed to be over in no time at all - it's a much more interesting climb than the previous slog! I think this summit (also a Graham) had the finest views of the trio. The rest of the Red Hills now looking much closer: But it was the Black Cuillins which were really breathtaking: The character of the ridge changed from here onwards, with a steep scree run to the next bealach. Though straightforward in descent, it was still one of the loosest and steepest descents we've attempted, and I really wouldn't want to be doing it in ascent! Looking down from the start of the "slide" - it doesn't look too bad from the top! Coire Sgreamhach from the bealach, with the Isle of Rum in the distance: 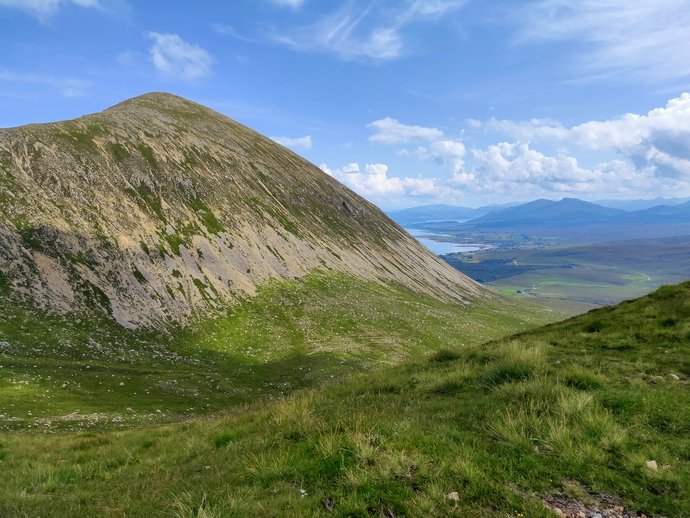 A little way up Beinn Dearg Bheag, the full horror of what we'd just descended could be seen Beinn Dearg Bheag is much lower than the other two hills, so the reascent was fairly brief. Approaching the summit we came across one of the most bizarre weather phenomenons we'd ever witnessed. We first noticed the very strange sound of what sounded like a vacuum cleaner with a nozzle fitted to the end of it - except this was of course at the top of a hill on a nearly windless day. We walked towards the noise and, as we got close, could see clumps of of vegetation being whipped up by what was essentially an invisible tornado. But a miniscule one - barely more than a foot in diameter. Since we were now on a plateau with no large drops around, I decided to put my head in it

- where it was incredibly noisy. I was leaning forward so my feet and torso were still in the calm air surrounding it, so the updraught made me feel like my head was being pulled off the rest of my body. I have, of course, previously seen little areas of leaves being whipped up by gusts and the like, but what was fascinating about this one was how localised / tiny, stable and strong this was - it's difficult to guess, but I would have thought at least 50 mph winds inside the tiny funnel.

After the wind had blown all the dust out from in between my ears we continued up to the summit cairn - leaving the micro tornado where we'd found it, still doing its weird thing. This summit had the best of the views towards the Small Isles: Heading down the long east ridge, little clumps of grass and moss began falling from the sky and we realised that this was some of the vegetation that was being picked up by the "tornado" several hundred metres away on the other side of the summit

View down the ridge: The ridge had a faint path and provided a nice, gradual descent all the way down to the burn coming out of Coire Gorm - the coire we'd been encircling today. Coire Gorm: 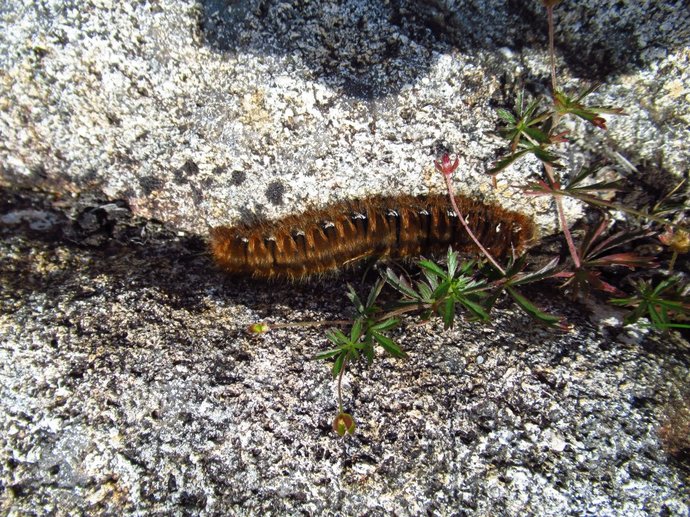 Beinn na Caillich from the descent: 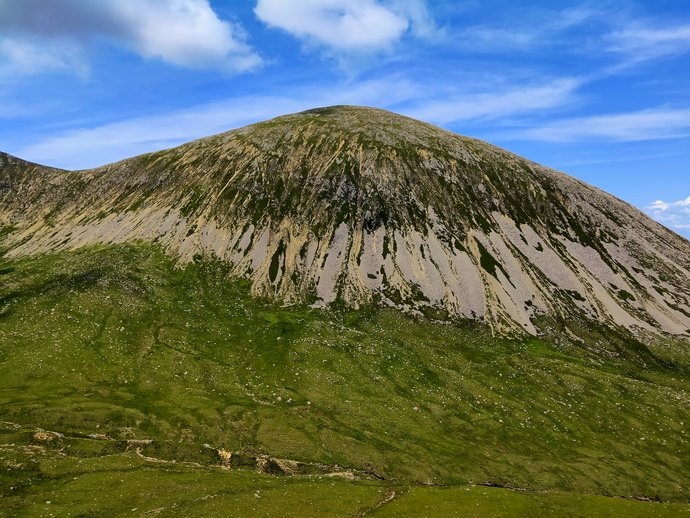 A final look back over the horseshoe: Soon we reached the Allt Beinn Deirge, which was easily crossed. The weather was holding so this seemed a good place for an extended break, during which we decided to reroute the main water channel

Next was another rough tramp across heather and ferns - fortunately slightly downhill - before a faint path is picked up leading back towards the car park. 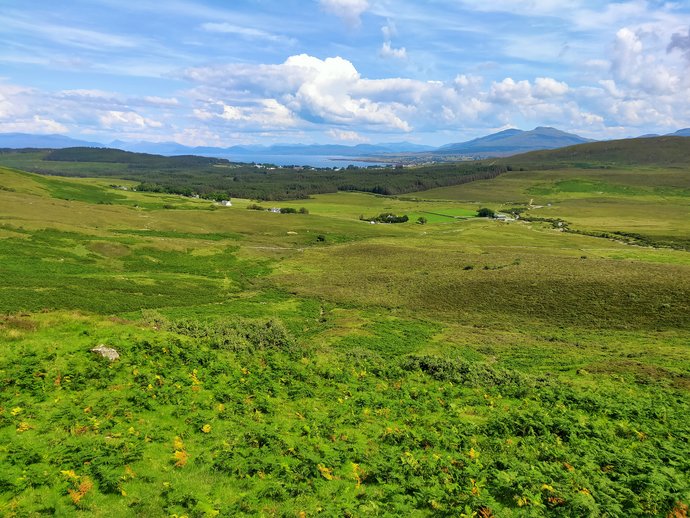 An excellent round, and one that I'll remember mostly for that very strange micro tornado - has anyone here seen anything similar when out and about?

Lovely photos of a great wee set of hills!

denfinella wrote:An excellent round, and one that I'll remember mostly for that very strange micro tornado - has anyone here seen anything similar when out and about?

Yes, reasonably often, though they are usually a bit bigger that what you described, and tend to move around more. Normally known as whirlwinds or land devils, but also as dust devils or snow devils when they pick up material that makes them visible. They can be driven either by convection (i.e. rising hot air) or by wind passing over an obstacle. In hills in this country the latter type, triggered by flow over ridges is probably more common, but you probably observed the former type.

That sounds tough going in places but plenty of reward views-wise. I've not encountered any tornados but I do recall a strange gust on an otherwise windless day, strange in the sense that I could see a small area of grass being blown about but as if it were moving along the ridge I was on. A wall of wind or maybe it was a tornado on the move.

Thanks both, certainly an interesting experience.

It's a great circuit!