So, the time had finally come!

Since moving up to Scotland in September 2019 I had climbed everything there is to climb in Glencoe and surrounding areas. Bidean nam Bian, both Bookils, Meall a'Bhuridh had all been climbed twice and I had even made a good dent into the Corbetts and Grahams. Everything that was except the Aonach Eagach!!

Why it had been left until now I'm not really sure. Maybe subconsciously I didn't think I was ready for it? Then it was winter and I certainly didn't want to attempt a winter traverse. Maybe I was leaving it as kind of Grand Finale. Whatever the reason, and after a week of intense 'prepping', reading countless walk reports and guide books, studying maps and enduring hours of harrowing POV You-tube videos (My personal favourite being Muriel Gray on the Munro Show) today was the day and with perfect conditions, and feeling fit, I was as ready as could be.

I quickly dismissed the idea of taking a rope. Whilst I do own one, I would have little idea on how to make best use of it solo, reminding me that I really should book a course to learn some basic rope skills!. Instead, I took my helmet to at least mitigate some risk of rock fall and plenty to eat and drink. Having done so much research beforehand I felt I knew the route intimately already but in the back of my mind there was still so much uncertainty. Will it be easier than I think or much harder? Will I stick to the crest of the ridge as advised or resort to seeking out the 'chicken runs' below? How 'bad' is bad 'step step' off Am Bodach? What is scarier, the descent off Am Bodach or the crazy pinnacles? I guess, one way or another, all these questions would soon be answered.

Setting off at 8 am sharp from the lay-by at Allt-na-reigh and fuelled on adrenaline, fear and excitement I made the summit of Am Bodach in under an hour. Passing two lads who had travelled from Fife and wearing canvas plimsolls and the sort of backpack you would carry on your first day at school, I didn't know whether I should feel more confident or call for Mountain Rescue already!!

Usually by now on a hill walk. at that point when you know you have done most of the hard uphill stuff, there is a sense of relief and satisfaction knowing that from there on in, everything would be easier. Alas, this was certainly not the case today, quite the opposite in fact with potentially the hardest part of the day just minutes away. Anyway, after a snickers and carton of juice and a few obligatory pics, I set off west from the summit. As the Aonach Eagach ridge loomed into view and the scale of the days objective became clear, I instantly felt a tightening of the muscles in my legs and my heart starting pounding harder and faster than it did even on the ascent. Quite abruptly the well-worn path on the summit crest drops steeply away and its only by creeping tentatively closer to the edge can one see the series of rocky ledges that will form my vertiginous route down to the col. I set off confidently at first, trying not to think about the consequences of a slip or the 900m drop below. The rock is thankfully grippy; first big relief, the holds are plentiful and reassuringly jug-like; second big relief. This is not to bad I thought to myself as I neared the bottom. In fact, it was only the very last awkward step down, where a protruding rock upset my centre of gravity and balance, did I pause for thought. Safely down onto the col, the continuing narrow ridge with it ups and downs and a few enjoyable bits of easy scrambling led quickly to the days first Munro summit of Meall Dearg. Was this the hardest part over, I considered, as I stopped briefly for more to eat and drink or was the worse yet to come? 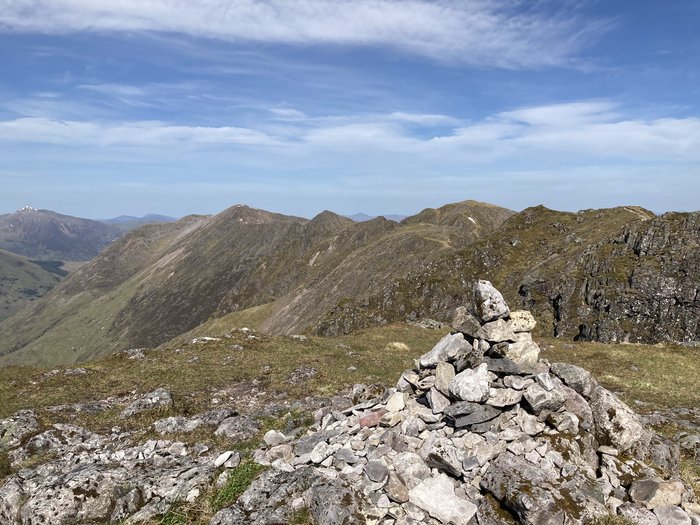 Looking back at Am Bodach and its impressive, near vertical NW face,...'I just climbed down that' I thought proudly to myself. 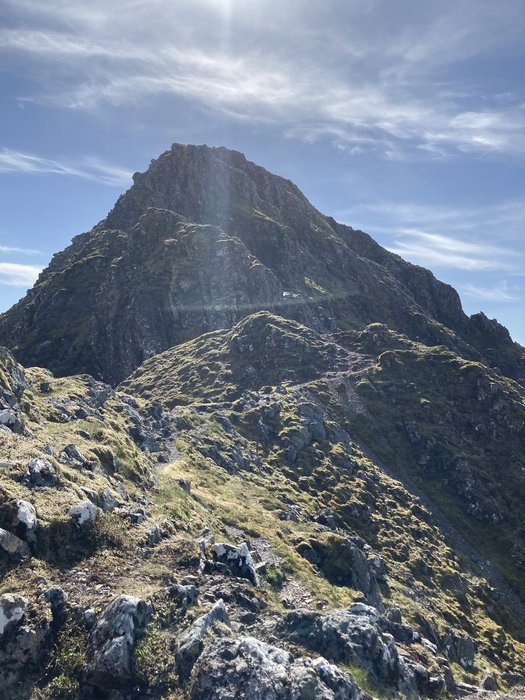 From Meall Dearg all the way to Stob Coire Leith the route is laid out before me. With twists and turns, up climbs and down climbs, chimneys, gullies and plenty of narrow rock ridges the overwhelming sensation now is one of excitement interspersed with trepidation. There is no escape route between here and Stob Coire Leith, something I must have read over 100 times and something which is now repeating over and over in my head. 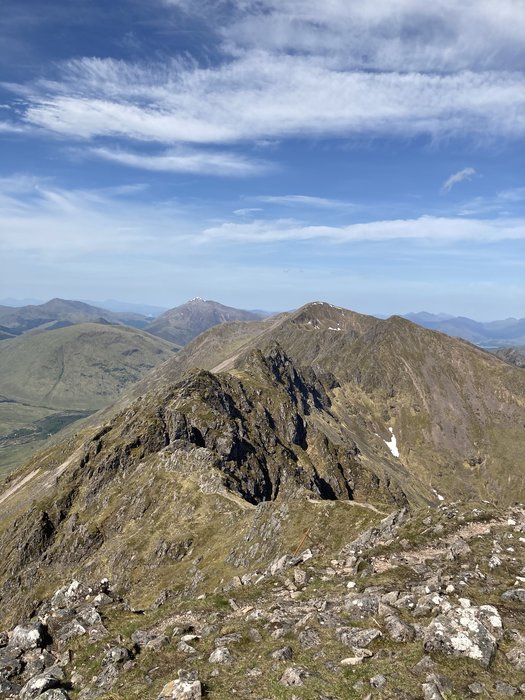 My camera is safely stowed and the shoulder straps tightened on my pack as I set off along the ridge.
At the first real obstacle a by-pass path looks tempting,...'stick to the crest' I repeat to myself, which is exactly what I do. The scrambling is intense and sustained, but never feels that scary, the exposure and sense of airiness is always there but never becomes crippling. The chimneys and rocky narrow up climbs are a complete hoot and negotiating the Crazy Pinnacles is probably more fun and exhilarating than I have encountered anywhere else on the hills. In fact, it was all over far too soon. So much so that I considered briefly changing my plans and reversing the route just so that I could do it all over again. I was buzzing with excitement like a kid after too many Fruit Shoots and I ran from the summit of Stob Coire Leith to Sgorr nam Fiannaidh. Why, I don't really know!
I passed a family group of 4 on the final approach to Sgurr nam Fiannaidh and it was only there, the second Munro summit of the day that I finally sat down and took stock. Allowing the heart rate to finally lower and feeling mightily proud of my accomplishment one can't help but dream of the next adventure; An Teallach, Liathach, Skye,....a lifetime of adventures await. 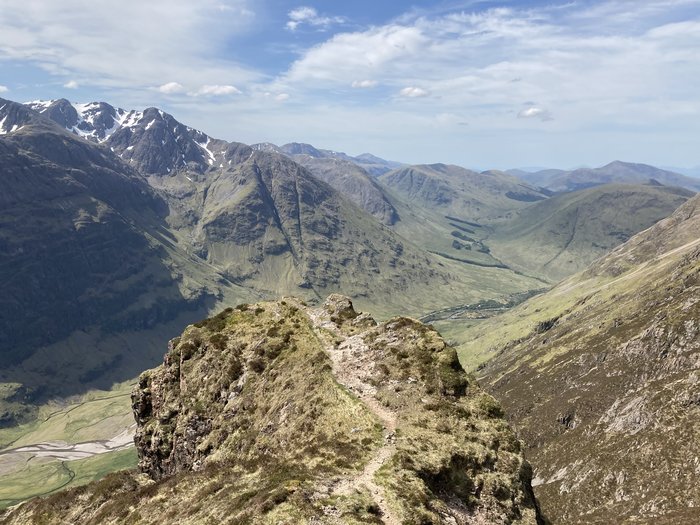 Feeling utterly blessed to live in the very heart of this beautiful mountain landscape I started my descent, sending a tribe of wild mountain goats scampering (I had to Google the collective noun!!). Avoiding the dangerous Clachaig Gully descent option I instead, continued west down easier rock slopes to rejoin the Pap of Glencoe path all the way down to the road below. 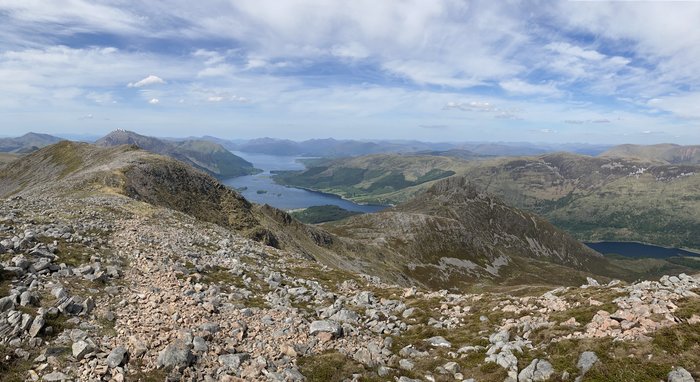 The traverse had taken, in all 5 hours, foreshortened greatly as my wife was there to pick me up at the bottom saving a lengthy slog back along the A82.
The rest of the day I spent smiling like the Cheshire Cat, enthusiastically recounting my achievement; my wife probably ready to punch me by tea time!! 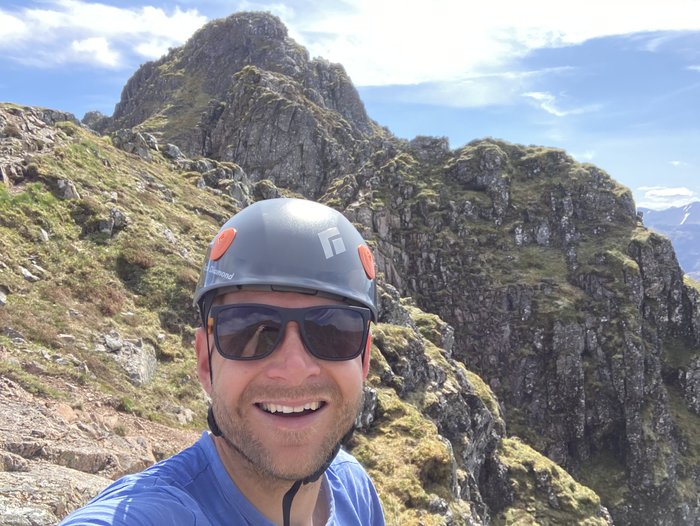 The Aonach Eagach traverse makes for a spectacular day out. Answering all my questions I had at the start of the walk; it was neither terrifying nor too technical. The exposure was never intolerable. The descent from Am Bodach I found the most challenging and the Crazy Pinnacles a complete blast.
A truly memorable, quality mountain day that I will think on fondly for many years to come.

"...utterly blessed to live in the very heart of this beautiful mountain landscape..."

So think we, the envious ones who don't live in the very heart of it, also...

A great read; and what brilliant weather you had for it...

I guess within your own Park....Kentallen just a few kilometres from Glencoe.

Maybe more in tune with the current situation amongst the mountain fraternity if staying away from the higher hills had been observed... Or if a cycle had been used as transport. Never have quite understood these driving distances that have been part of the deal when in the Highlands a round trip for supplies can easily exceed the distances to be driven a couple of times a week.
In my own area using my bike from home and staying low has been my own exercise during the past few weeks...and it does not take much looking to see that a few folks have been on the hills during the virus spread. I guess that they have had good safe days out during the brilliant weather in the 'stay away period'.
Perhaps now we are not too far away from the unlocking but even then a great deal of care will have to be observed.

Nice - but in wet and windy weather it can be a lot harder. We used a rope for the last slippery slabby section down to the final col, when a big storm suddenly blew in from nowhere

you made much the best descent - the direct one to Achtriochtan is extremely steep all the way down. Without poles my quads ached for two days

Nice one. Looks magnificent. Love that first picture. Hard to beat a day like that on the Aonach Eagach.