Freedom had ended on a very good outing: way back in the middle of March, I’d spent a few hours surrounded by the snow-covered hills near Tyndrum, little knowing that the memories of that day would need to sustain me for more than three months. Covid-19 had arrived in the UK with a vengeance by then, and when I arrived home that afternoon, I heard the words “no unnecessary travel.” It was another 10 days or so before full lockdown arrived, but for me, hillwalking adventures were suspended as of 13 March.

I’ve kept busy with various domestic tasks and projects, and have taken long local walks nearly every day, discovering new nearby places—some of them quite nice. I have, of course, missed being able to head for the hills on a whim, or with good weather, but it hasn’t been all bad. I’m so very lucky to be in, and am appreciative of, my current circumstances, when so many have lost loved ones and/or jobs, struggled with home schooling and challenging domestic situations, and have otherwise negatively felt the impact of this crisis.

Jimmy and I were meant to have been travelling to France today, to begin our GR10 adventure. We’ve known for a long time now that we wouldn’t be going: I’d put my kit away weeks ago, not without a tear or two. The accommodation arrangements that I’d worked on for hours and hours and hours over many weeks took all of a half hour to cancel. Jimmy’d been fully refunded for cancelled flights. Again, compared to many others scrambling around trying to rearrange or get refunded for holidays, we’ve been very fortunate to not be left out of pocket. We’ve pencilled in another attempt for next year.

I’ve been thinking about heading to the Hill of Stake from my house for a few weeks now. The weather has been so dry; there probably won’t be any better time to go for it. I’d mentioned it to Gillian, and she was up for it. It’s a long way—5-6 miles—just out to the mine track at Muirshiel, and that’s from near Hardridge Farm, which is about 2 miles from home. I’ve been across Duchal Moor a couple of times, but I’ve never done it from home. Gillian texted me the night before suggesting that we take the cars for the first 2 miles (there and back, remember, so saving us a total of 4 miles), but after a lot of swithering, I opted to leave mine at home. A decision I’d come to regret.

I’ve always before gotten a bit of the heebie-jeebies walking across the moor; there’s no logical rationale for it; perhaps it’s only due to its desolation and lack of features. Today, though, in the sunshine and with company, it felt much less creepy, which was no doubt also mitigated by the pure pleasure of being out on a “proper” hillwalk, wearing long-neglected boots (another decision I’d come to regret) and carrying full rucksacks—waterproofs, water, sandwiches, everything! 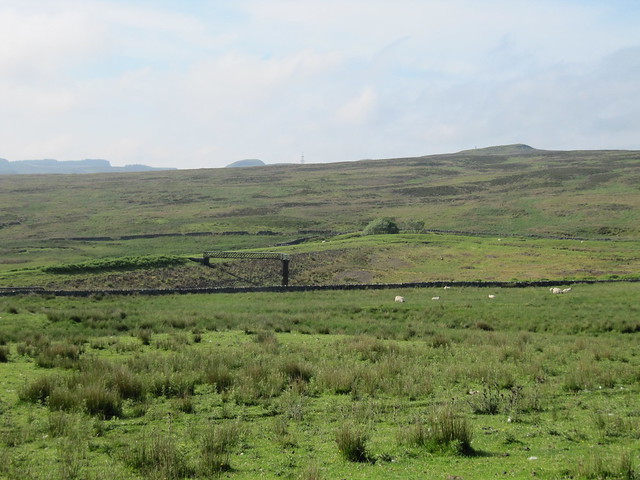 the High Kilmacolm Dam holds no water these days 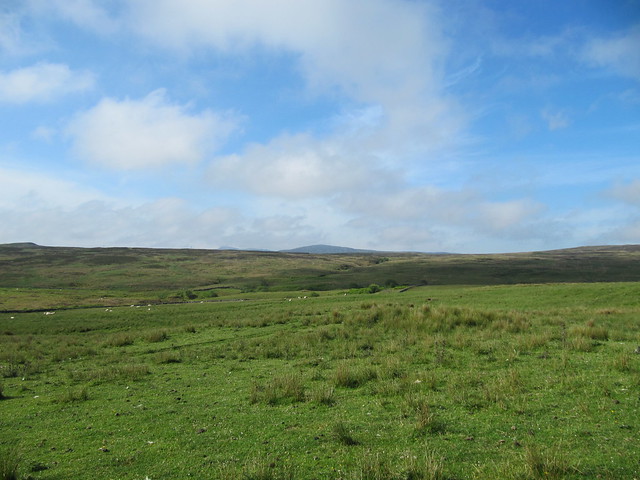 bleak. featureless. At least it's green, and I think that might be our hill in the distance.

There’s not much to say about the moor; as above, desolate and featureless. We happily chatted away, and the hours and miles passed. When we could see the mine track across the way, we left our track, forded the river, and made our way across the rough ground, shortening our distance by a km or two. It was still a fair distance to the mine, and then a trek up the hill across the treacherous rough ground that I remembered well from my most recent recce of this hill, in Feb 2019.

The high point of this section of the walk was the abundance of bog cotton. There wasn’t a path, but at least it was mostly dry. 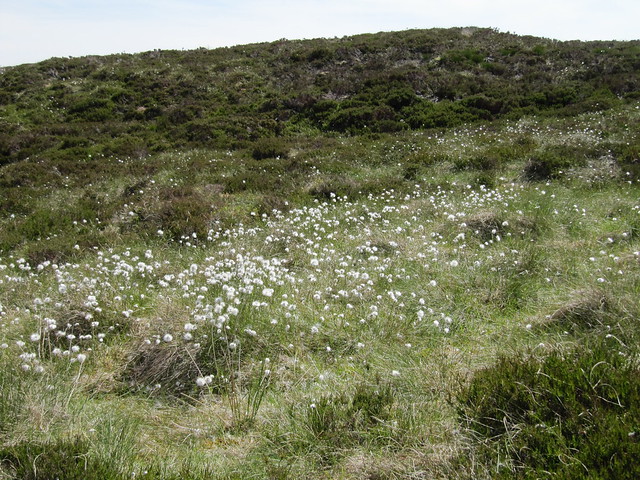 an abundance of bog cotton 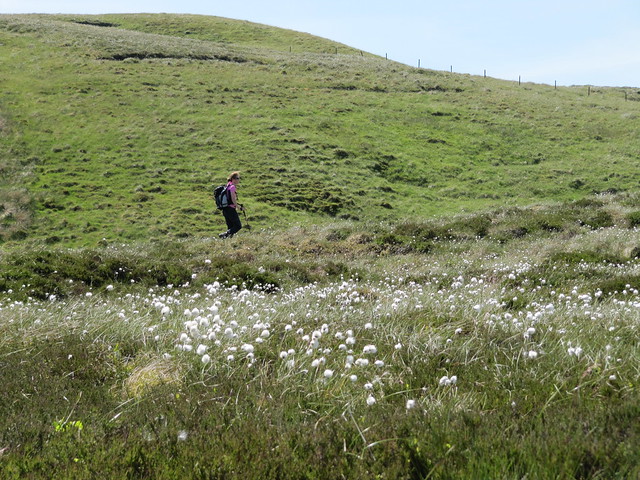 and Gillian making her way through it

There was a surprisingly good view from the summit—across Cumbrae and to the hills of Arran. Panning around, we could identify Dunoon and the Cowal hills, the Loch Lomond hills, including Ben Lomond, and a big pointy hill somewhere in the middle that we thought might be Cruachan, but couldn’t swear to that. A persistent haze prevented us from seeing any hills to the south. 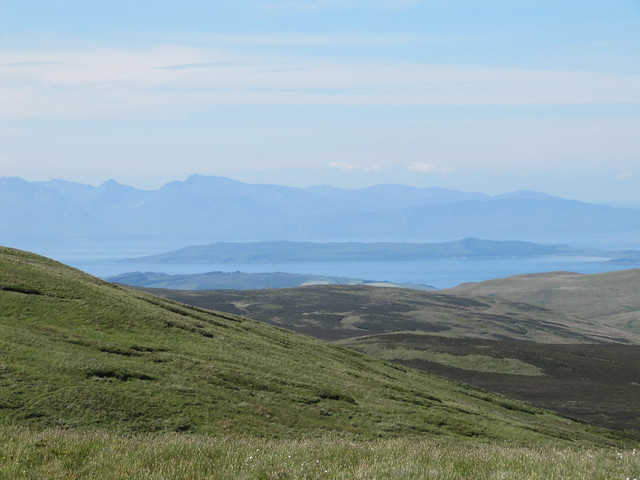 toward Largs (unseen), Cumbrae, and across to Arran

We had our lunch a short distance from the summit, tucked down out of the wind behind a wee rise. Eating a sandwich on a hilltop with a view—such a simple joy, one to not to be taken for granted ever again, or at least for a while! 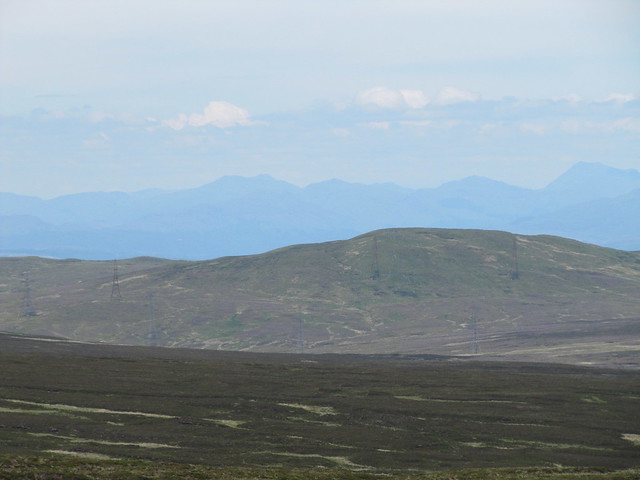 still bleak on the return journey -- what IS that pointy hill at the right of this photo?

The descent was fairly horrible. We hacked our way through waist-high heather, broken up by boggy sections of dense grass, and interrupted with lethal channels (man-made, I’m sure, but for what, we couldn’t figure out) that weren’t very wide—an easy step across, assuming you saw them in advance—but that were 3-4 feet deep. It was hard work, and just about the time I was declaring to Gillian that I’d not be making a return visit any time soon, if ever, I stepped knee-deep into some of the muckiest bog I’ve ever encountered. 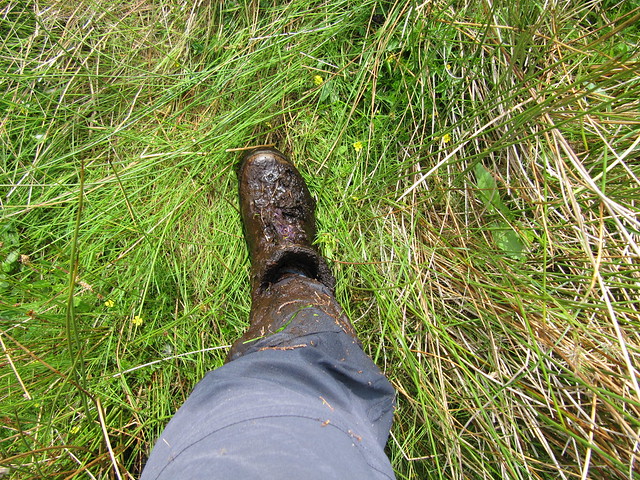 We finally reached the mine track again, and began the long march home. My feet, unused to being in boots, were very sore, and I was dreading walking the final 2 miles on tarmack by my lonesome. Gillian offered me a ride, which saved me from crawling home painfully. I was at first reluctant, having dutifully followed the distancing rules to the letter for the last 12 weeks, but the level of discomfort ruled the situation.

I sat in the backseat, sani-gelled my hands before getting in, wore my buff over my face, and hung my head out the window.

It wasn’t the GR10, but it was great just to be out and about. And although I’d felt duty bound to get to the top of this hill, given that it’s my local—(likely) never again. I feel fairly safe typing that from the bog-free safety of my office.

Postscript: My boots were an absolute horror. I’m still unsure how I’ll ever get the one fully cleaned on the inside. Two days on, they’re still sitting on the porch. I could barely move the day after; I’m horrified at how hill un-fit I’ve become—it’s been years since my legs have been so sore following a walk. Not only that, but I’ve got some fairly nasty blisters on my heels. With the benefit of hindsight, I now know that my first outing after such a long interval should have been on a much shorter, and maybe even path-ful route.