Though decided to try a different route rather than the approach from Glen Doll, partly because I suspected Glen Doll would be busy but mostly because I fancied a change and had read a couple of reports doing these from Glen Prosen somewhere I've never really explored.

We parked up just before a bridge not far from Glen Prosen Lodge where there is space for around 4 cars and a bin for rubbish. There was one other car when we arrived, I'm guessing it may have belonged to the only people I saw on the Glen Prosen side during the walk. Following the road over the bridge we passed a few houses and some estate buildings and continued to follow the track that ran along the bottom of the glen. It was raining, but I didn't care I was just glad to be back out! The track led along to Kilbo bothy, here the route deviates from the OS map as the forest has been felled and the track through it disappeared with the trees but there is a new clear track just a bit further along to follow. Around here I saw several pairs of kestrels, a short-eared owl and I THINK maybe a merlin, seemed to be a bit quick for a kestrel and smaller but it was just a fleeting glimpse so I'm not 100% sure. Looking back down Glen Prosen

I dragged myself away from watching for birds and continued on uphill, Mayar looked very far away and Driesh when it came into view looked even worse but we kept going the good track ending and we followed a grassy/muddy ATV track passing a couple of golden plover on the way and Zena pouncing on an lizard that didn't do a good job of keeping concealed on the path, fortunately it wriggled away but a regrowing tail suggests maybe this little lizard needs to be more alert! 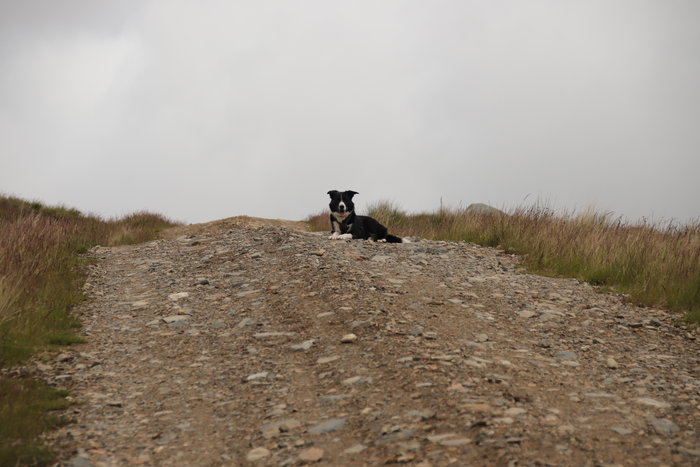 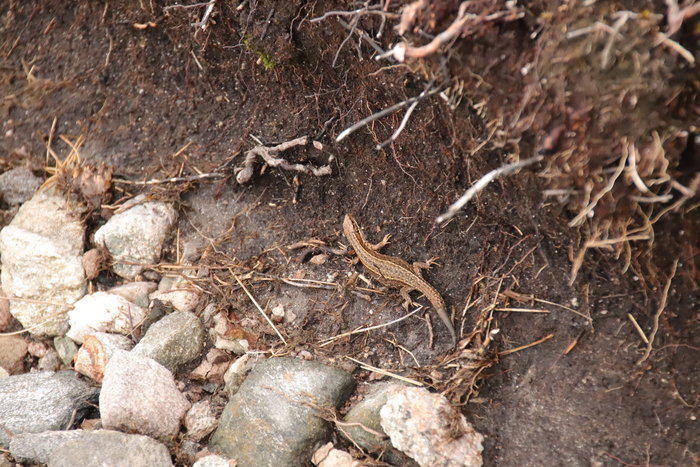 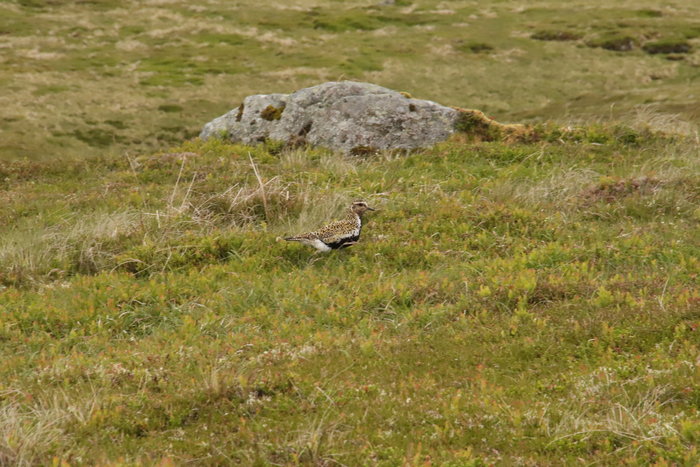 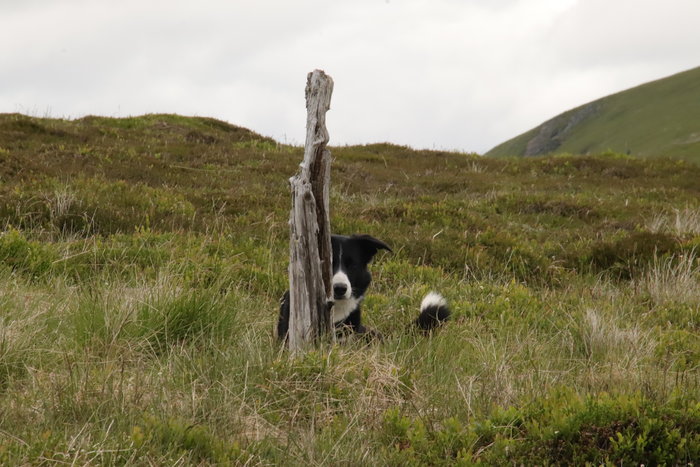 On the summit of Mayar I could see people, every time I glanced up there seemed to be people coming or going from the summit. I think my Glen Prosen ascent was a good choice! Reaching the path between Mayar and Driesh, we turned to head up Mayar first. As it turned out, the ascent of Mayar wasn't as bad as it looked with steps making the going easier - I really don't remember these the last time I was there! View from the ascent up Mayar 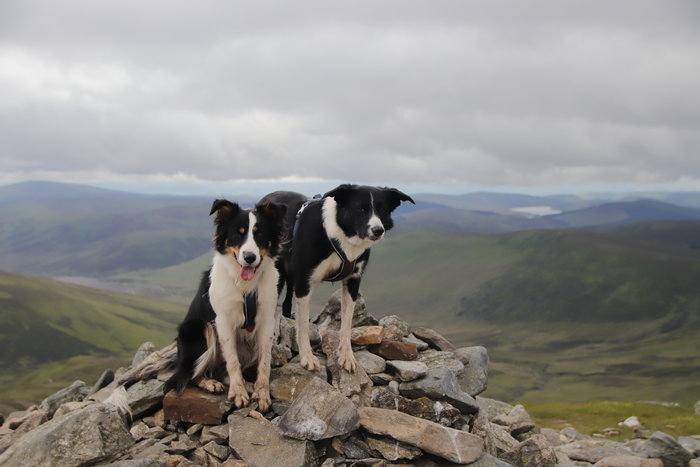 We didn't spend long at the summit, waited to get Zena her summit photo and then headed back down to go across to the second Munro of the day - Driesh. There were a lot of people coming down from Driesh as we went up, but at the summit we were the only ones there (for a short time anyway). Zena was given some off-lead time here so she could have a run around and a roll about to celebrate. It was only 2 weeks last Tuesday when she was in for her 'big girl op', something I didn't think we'd get done until after her next season which would have been this month leaving us still restricted, but fortunately the vets got in touch and managed to get her in. We opted for a keyhole spay, she only needed to rest for 2 days before returning to normal walks! Just as well, it was a nightmare keeping her quiet for 2 days wouldn't have fancied having to keep her quiet for 2 weeks 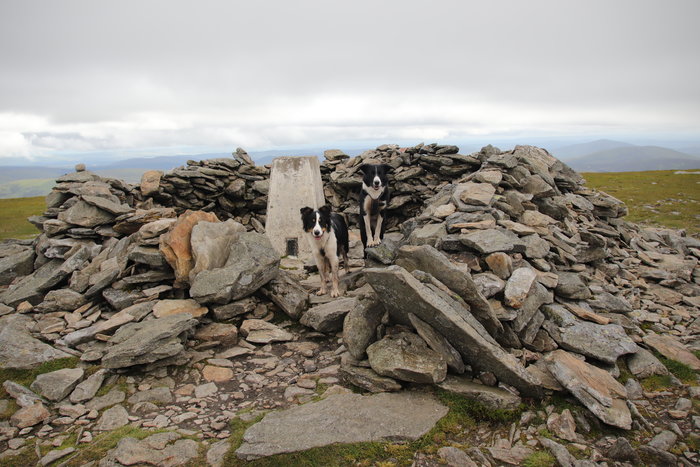 Zena's belly, all healed up after her spay!

From the summit of Driesh we followed a faint path to the remains of a fence, it's a bit hard to spot as is the faint track heading down the Shank of Driesh which we were using for our descent but just a short way down some of the fence posts are still standing. The clear track we were heading down to was all-too obvious though. The path became a better ATV track, and then the big track which lead us over Lick spotting a hare along the way. 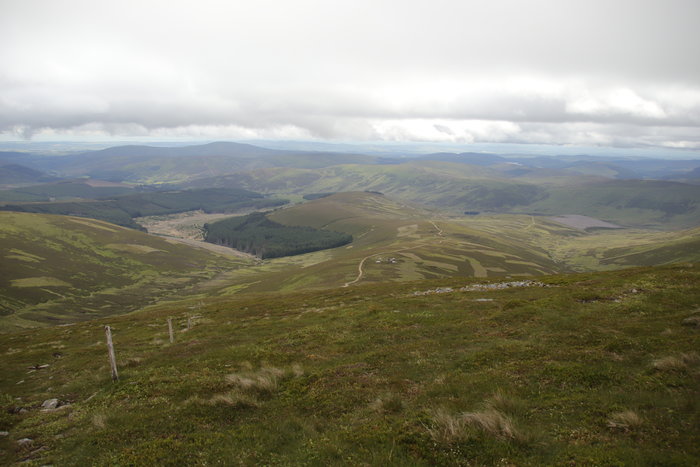 Descent route following the fenceline, the track we were aiming for clear to see. 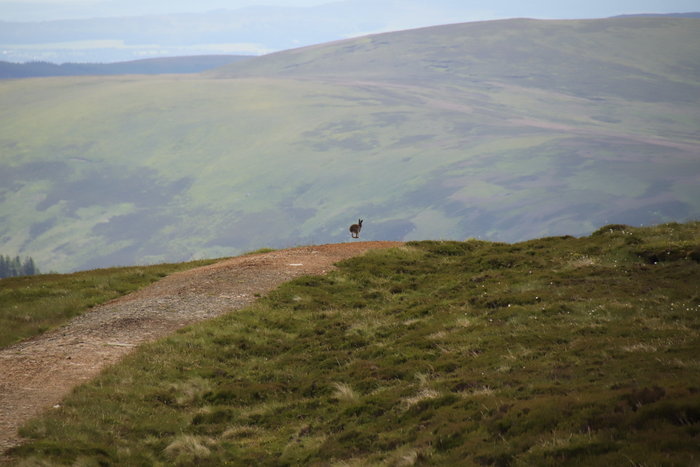 At a fork Moss found some entertainment in a wide pipe that she could run right through before we continued on taking the track to the left heading towards a forestry area and down to the outward track through a field full of baby rabbits, or the same baby rabbit running rings around us lots and lots of times winding the dogs up! 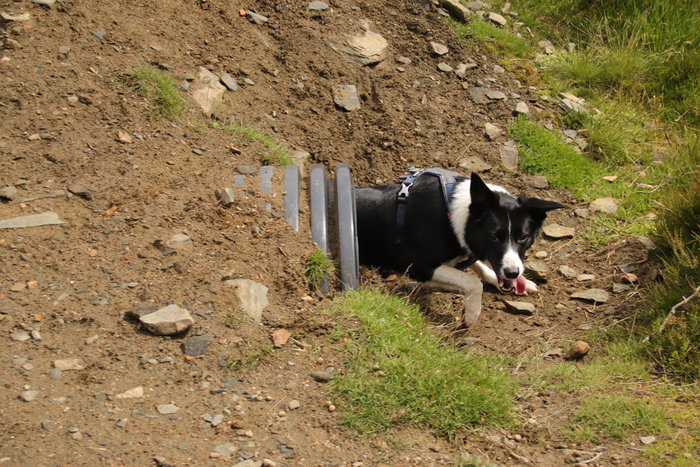 On the last road stretch we picked up two plastic bottles. I spotted one, and then an identical bottle just a few steps further along. Bit disappointing to be picking up plastic in such a quiet glen, but they were safely deposited in the bin at the car park.

It was great to get back in the hills again, and I don't think I was the only one to think so as Moss seemed very happy to be back out adventuring again! I think the usual ascent via Glen Doll taking in Corrie Fee is by far the nicer approach for these two, but especially in the current circumstances the quieter Glen Prosen approach was definitely a good choice. 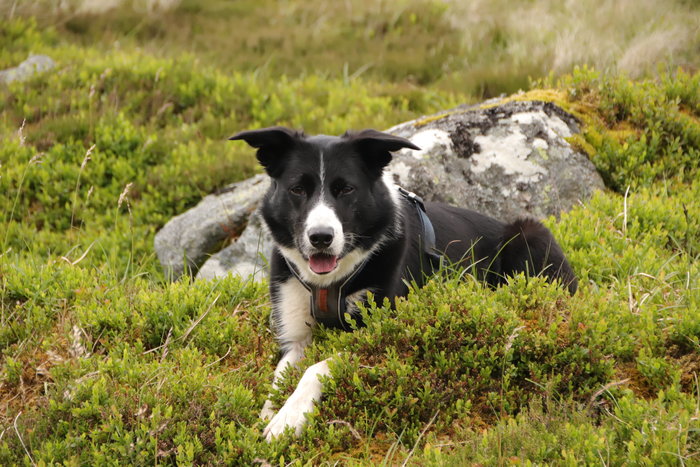 Been up these from Prosen as well. Nice enough approach and we also saw owls.
Not sure you’d be so welcome in the grouse season though.

Great to see the collies out on the hills again. Love the photo of Moss enjoying the pool.

What fantastic wildlife and dog photos! Especially the short-eared owl. I climbed Mount Battock last year - a relatively dull walk, but brightened up by lots of golden plovers. I think they were trying to draw my attention away from their nests. Beautiful birds.

prog99 wrote:Been up these from Prosen as well. Nice enough approach and we also saw owls.
Not sure you’d be so welcome in the grouse season though.

We tend to be a bit more choosy in grouse season, plenty of other places to go to avoid conflict

dogplodder wrote:Great to see the collies out on the hills again. Love the photo of Moss enjoying the pool.

Thanks, it was great to get back out again. Though rather than tiring Moss out she seems to have more energy than she's had for ages

natubat wrote:What fantastic wildlife and dog photos! Especially the short-eared owl. I climbed Mount Battock last year - a relatively dull walk, but brightened up by lots of golden plovers. I think they were trying to draw my attention away from their nests. Beautiful birds.

Mount Battock is great for Golden Plovers! Aside from when on Orkney, that was where I saw my first (also found an empty golden plover eggshell)