I know that I've walked most of the Union Canal before, and there's a good chance that I'm only missing the stretch from Falkirk High to the wheel - but there was just enough doubt in my mind that when I started to walk the Forth and Clyde canal the year before last I just set out from the Kelpies, and left the Union canal to worry about later. So there was always a decent chance I would just walk it all again - the first time was so long ago that I don't remember much about it - and now the first sections had become a nice opportunity for local walks.

I was a bit doubtful about setting out, however, when the appointed day came round, because it was so misty that you could hardly see anything - I decided, however, that you didn't need to see much around the canal, and that I needed to get out, and set out for Lochrin Basin. 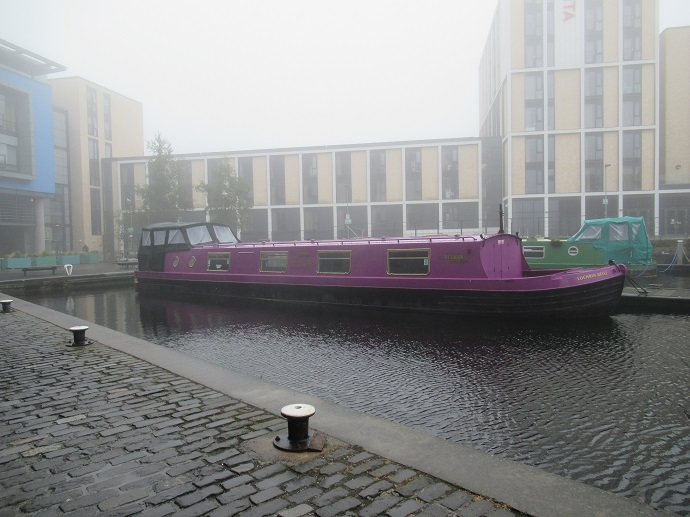 This is not the original start of the canal - it once ran on around a bend and along the line of what is now the end of the approach road, to finish at a basin beside Lothian Road. The end now is tucked in just off Fountainbridge, and there are always boats in this first bit, including one selling coffee.

There are usually real swans about, but the benches at the end have a great collection of swan statues just to make sure. 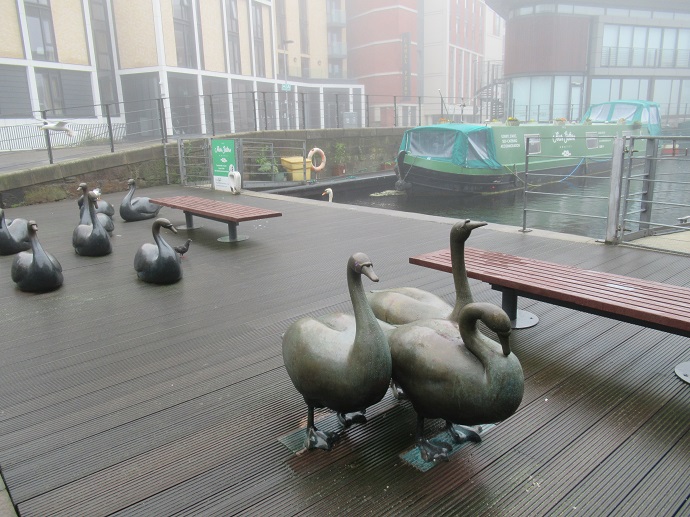 The hoardings along here have boards up with information about the history of the canal and the area - market gardens at Fountainbridge, and an assortment of local industries, and the work of building the canal and the coal and stone transported along it.

The Leamington Lift Bridge is a landmark of the area - I'm not sure I've ever seen it open, but it's a beautiful piece of machinery. 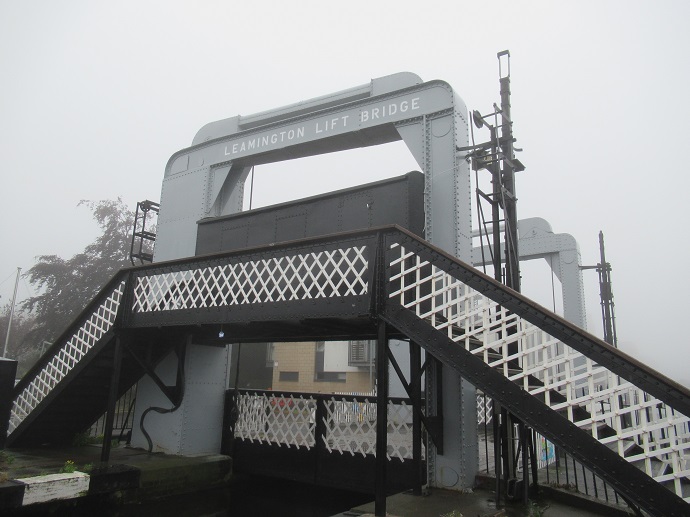 Beyond that is a long stretch mostly between the backs of houses - pretty at this time of year, though, both the banks of the canal itself and the flowers growing over garden walls. There's a bridge here which you can't get up onto from the towpath, which has caught me out before - a very self-contained kind of place. 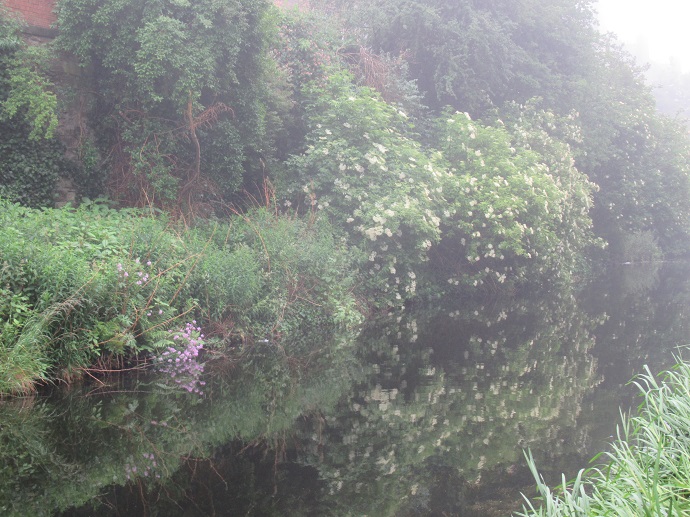 Eventually the right hand bank opens out onto the green expanse which is Harrison Park - a very hazy expanse this time. The next bridge is beside the church at Polwarth, and this time you can get out to the road - the church has a kind of garden running down to the water, as well, and generally the world is less turned away. 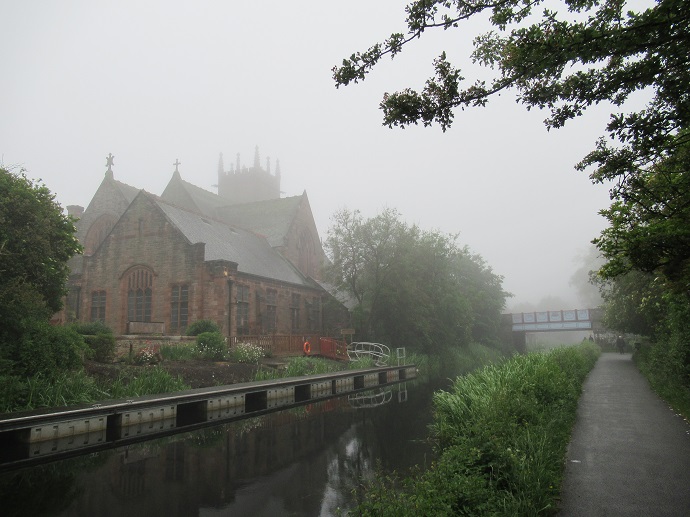 No boats in the boathouse now, but it's still a nice splash of colour in the grey. 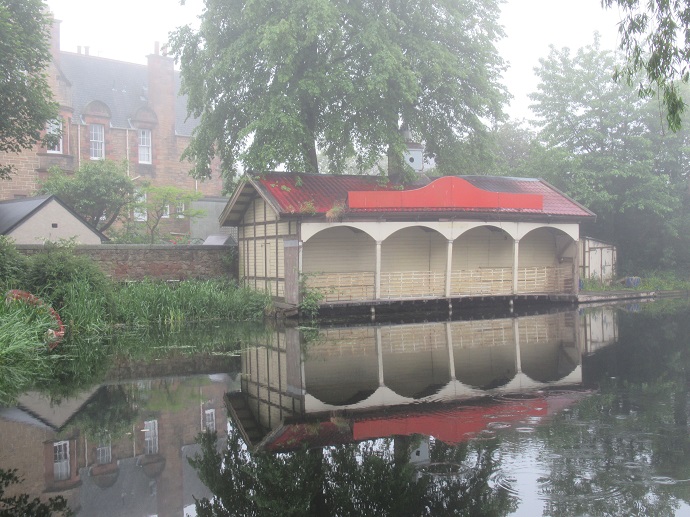 Eventually two aqueducts turn up quite close together, the first carrying the canal over Slateford Road - this one is fairly unspectacular and fairly modern, but apparently is known as the Prince Charlie Aqueduct, as it's close to where he camped in 1745. 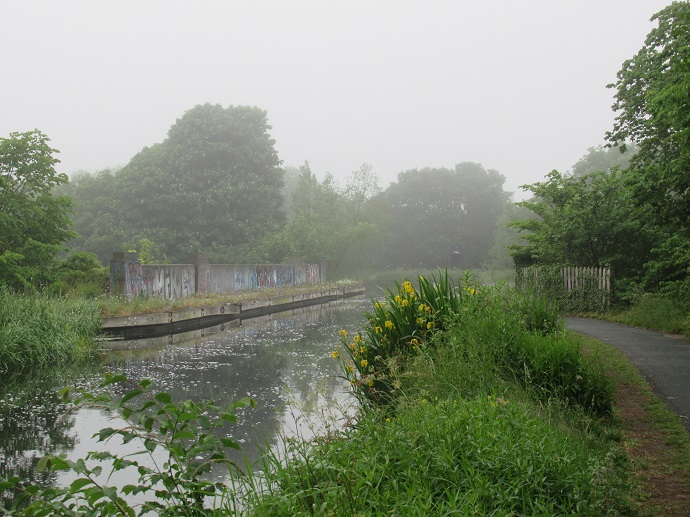 The second is the real showpiece of this stretch, the eight-arch Slateford Aqueduct, built between 1818 and 1821, and the second longest aqueduct in Scotland. It carries the canal over the Water of Leith, and I had been here just a week ago, on a very different kind of day, picking up the John Muir Way where it joins the river. Up until now I had been following the John Muir Way again, but now it was heading off down the steps to the riverbank, and I was keeping to the canal. 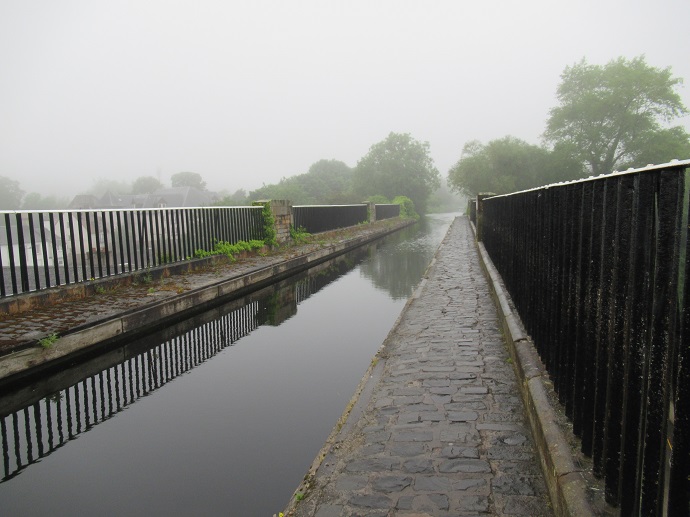 The next stretch was pretty and tree lined and uneventful, until a misty space opened up again at Hailes Quarry Park, from where stone was transported along the canal for the buildings of the new town. 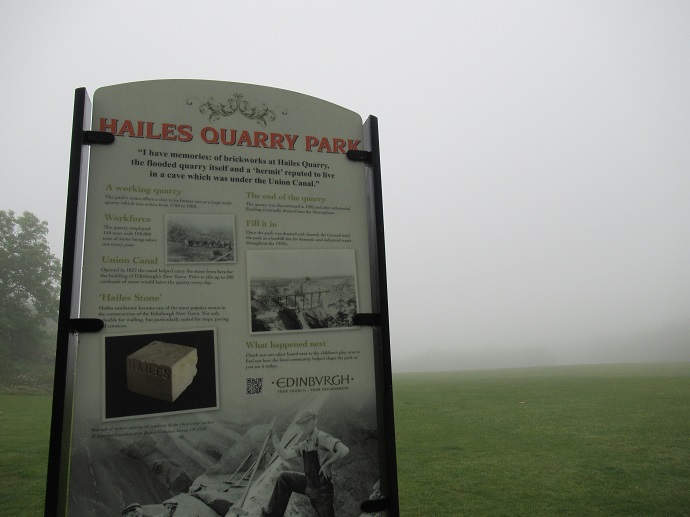 There was another short stretch here that I had walked not all that long ago, making my way across towards Bonaly and Allermuir - it's not the nicest of areas, but the bank of the canal was bright with flowers. There are about a dozen bridges, one after the other, but eventually the canal passes under a bigger road and into a less interrupted stretch - two swans here had five cygnets and a duck in tow. The canal bends quite sharply, and leaves houses behind - the noise of the bypass and big office buildings on one side, and some rougher open ground on the other, with some beautiful artwork on metal storage containers. 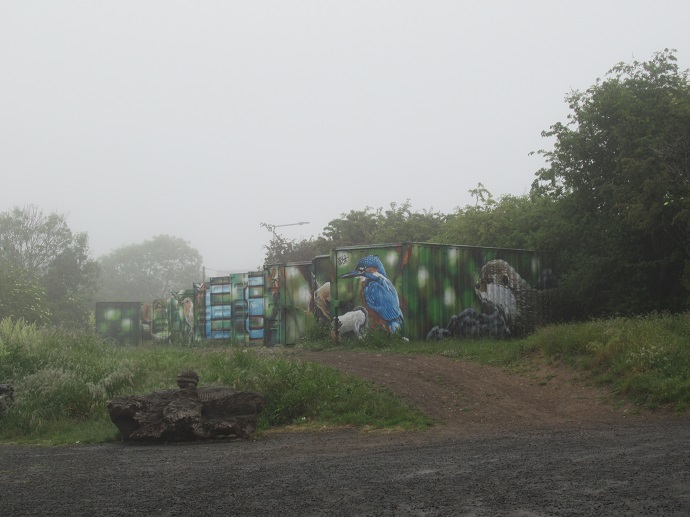 The next bend was my nearest point to home, and I left the canal to find a way through the odd loops of South Gyle. The weather looked more promising when I set out for the second time - the forecast was for sunshine and showers all day, but so far the showers had been heavy but brief, with sunshine predominating. The weather changed its mind once I was out, however, and I walked through heavy rain to get back to where I had left the canal.

Not far beyond the bend is the relatively new Scott Russell aqueduct, built in 1987 to carry the canal over the city bypass - John Scott Russel was the first observer of a soliton wave, further along the canal, and there was a sign attached to the railing with information about it. 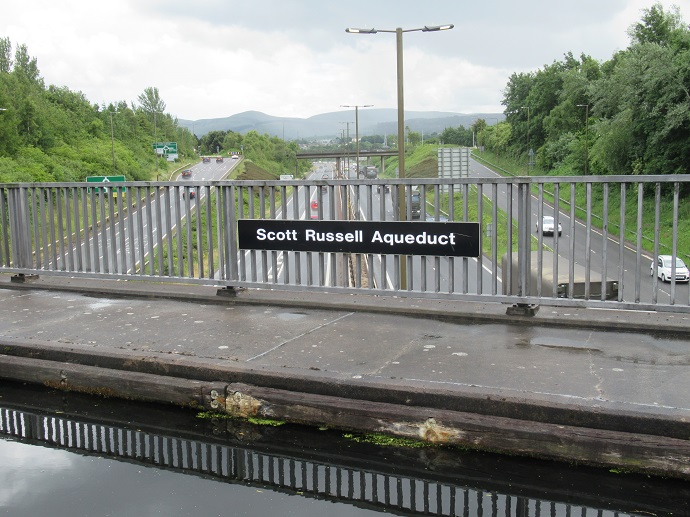 Just beyond was the first of many bridges.The canal looked surprisingly full here, and maybe the heavy rain really had filled it faster than the overflows could empty it again. The rain came on again steadily, although never quite as bad as it had been the first time round.

I was starting to remember something about this stretch from the last time - it's green and pleasant, but without much more to say. It's essentially a stretch of bridges - carrying minor roads and farm access track, and some of them very attractive, but there's not really much else here - trees and farmland, with the southern view rarely more than a rising bank, and the glimpses of wider view to the north tangled in clouds.

A great tree had come down across the water just before one of the later bridges, so there can't have been much travelling here lately. Beyond the first set of bridges there was a stretch without, and some cows sheltering in the corner of a field - the first time animals I'd seen in all the green fields. Just beyond that again the canal crossed above the Gogar Burn down below, although it wasn't obvious at canal level that it was a bridge. A little further on again water was running out of the canal at an overflow, so it must really have been quite high. I'd met a handful of walkers and far more cyclists, but it took until beyond Gogar Moor Bridge to see people actually on the water, in a real canoe which they were paddling with an oar each. A surprisingly impressive house seen through the trees turned out to be connected to a golf course, while an odder glimpse on the other side looked to be an old church, but the canal left both of them behind without any more to be seen. One point had a decent view to the north, however, and after that the far bank was dappled red with poppies. When the first houses of Ratho came in sight they were definitely modern. There were canal boats here for the first time since leaving Edinburgh, and various bits of historical information by the path - all quite a change from the empty places. I didn't remember the Ratho Marina, which looks quite shiny and new - maybe it really has appeared since I was last along here, although that would make it even longer than I thought. A more traditional view was the bridge and the Bridge Inn - I've always meant to come out for a drink here, but that will have to wait. I pottered round the village a bit, which I didn't do the last time round - some nice old stone houses - but I had to get home for dinner. This was a walk of two parts - Freelands Road flings itself crosscountry, passing under the M8 and over the railway, and was a very pleasant country road, while walking the pavement of the A8 was a bit different, although it still has some decent views!

Re: Union Canal - Lochrin to Ratho

Enjoyed reading this and your photos complimented the writing. Thanks for taking the trouble to do the report.