This is a sort of follow-on from Cuillin's excellent how-to report for getting to the proper summit of Stac Pollaidh. Having failed to meet up with Cuillin at the start of the month due to work commitments, I had planned to visit with my sister at some point.

With my sister (Laura) and her Canadian flatmate (Chloe) visiting this weekend, we decided to go for it. The weather was looking less than promising, with low temperatures, high winds and lots of showers forecast for the Sunday. The drive over was wet, and I didn't have high hopes for getting on the hill at all.

Having managed to get to the proper summit of Stac Pollaidh once (in 2002), I had since bottled out twice, and saw reaching the summit again as a way of regaining my scrambling mojo. Laura and Chloe were both regulars at Alien Rock in Edinburgh, with occasional forays outside, so I thought they would be better placed than me to get up it.

View from the bottom: 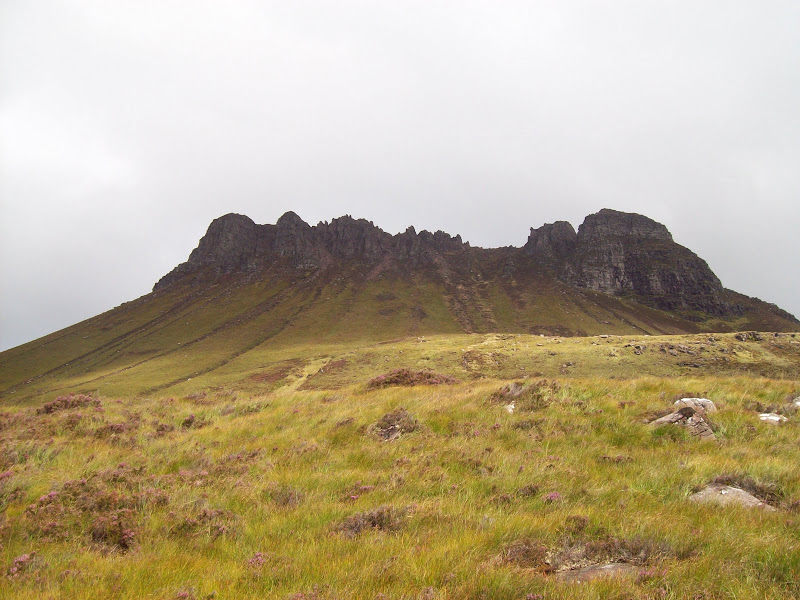 Having driven through the worst of the weather, we arrived at the carpark just before 11am to find conditions dull and windy, but dry, and with the summit clear. We made a quick start to avoid getting caught behind a large group, and in less than an hour we were on the col where the fun begins.

Looking N up the coast: 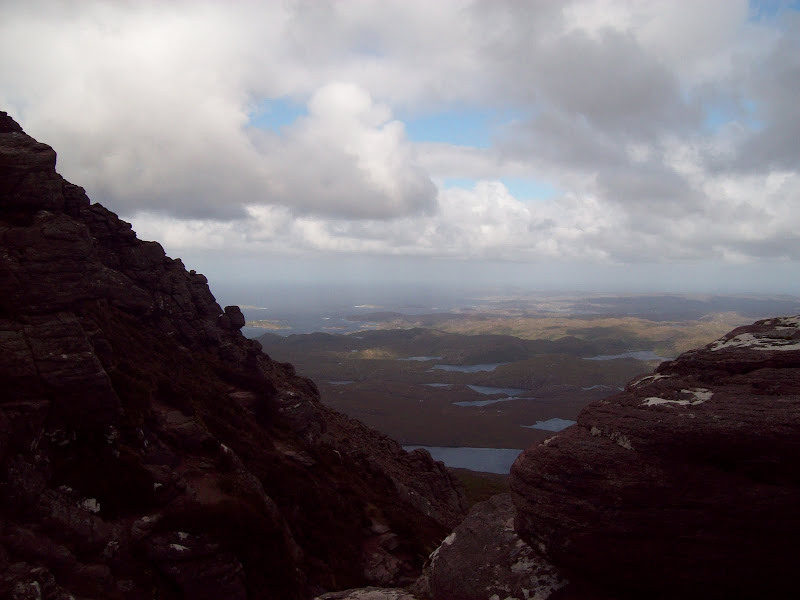 Laura was keen to do as much scrambling as possible, so we ended up making a couple of false starts before finding a point where we could get onto the ridge. I soon recalled that I had done this before, as we arrived at a slightly awkward descent, where you have to jump across a narrow gap to reach the next section of hill. I distinctly remember squirming about above this for a good half hour on a previous visit in the snow. Thankfully, today was much easier! 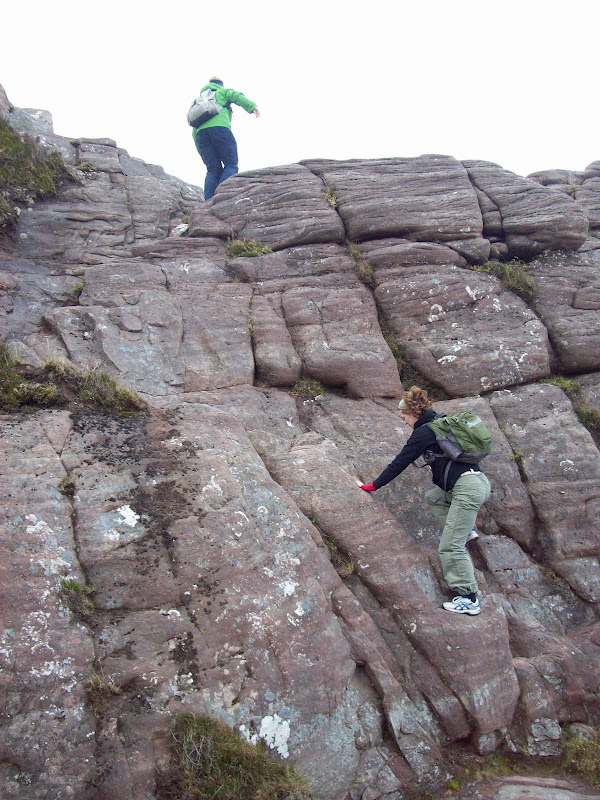 The weather was improving slightly, with some dappled sunshine around and all the peaks in the immediate vicinity clear of cloud. However I thought I'd throw in a couple of photos from one of my failed attempts (in 2008) as the weather then was truly spectacular. 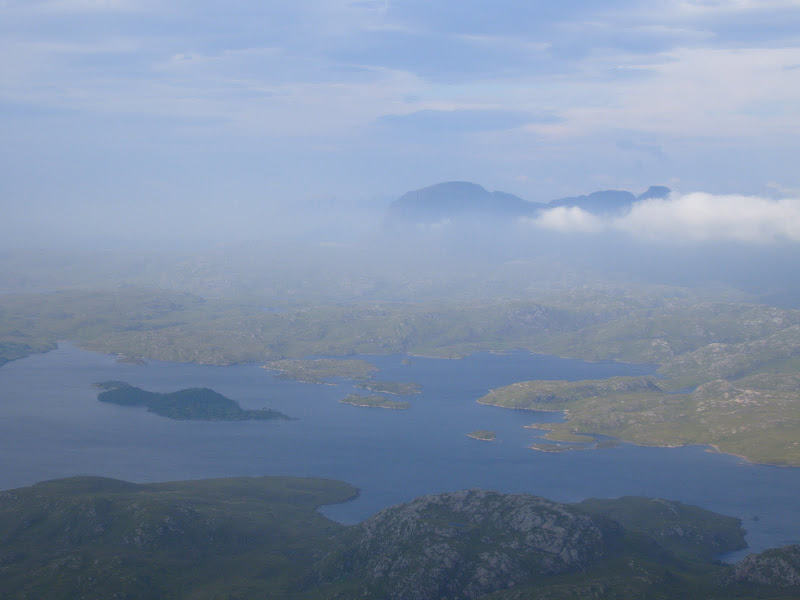 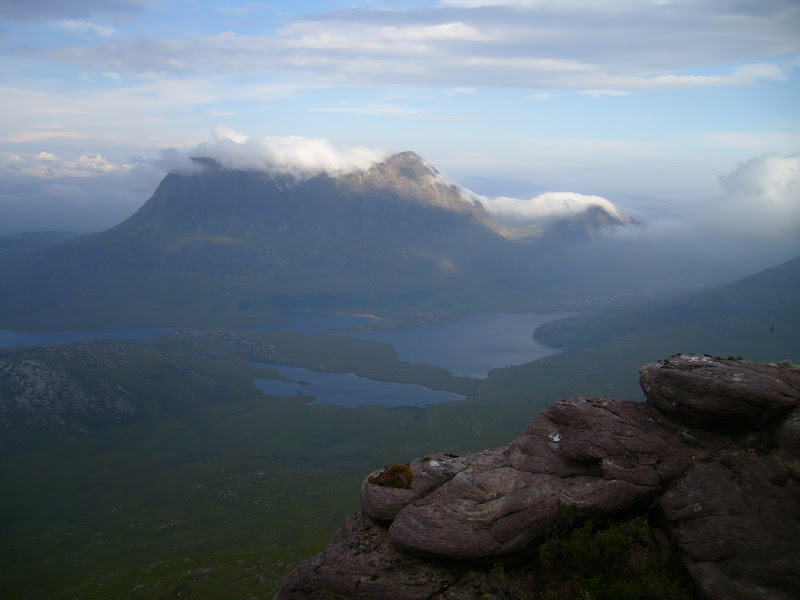 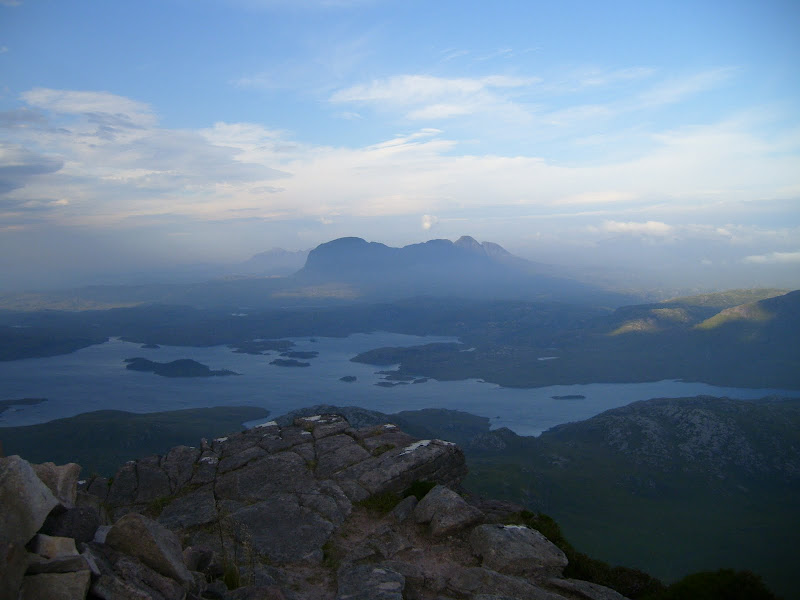 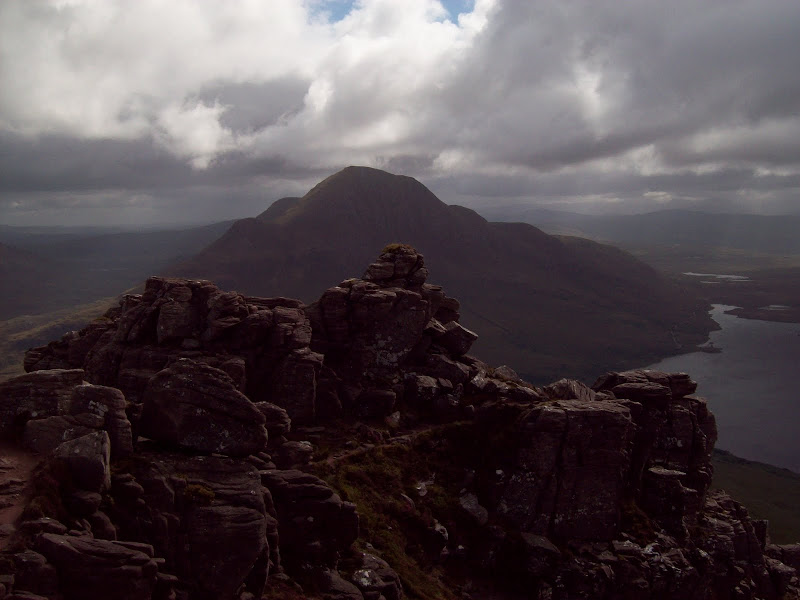 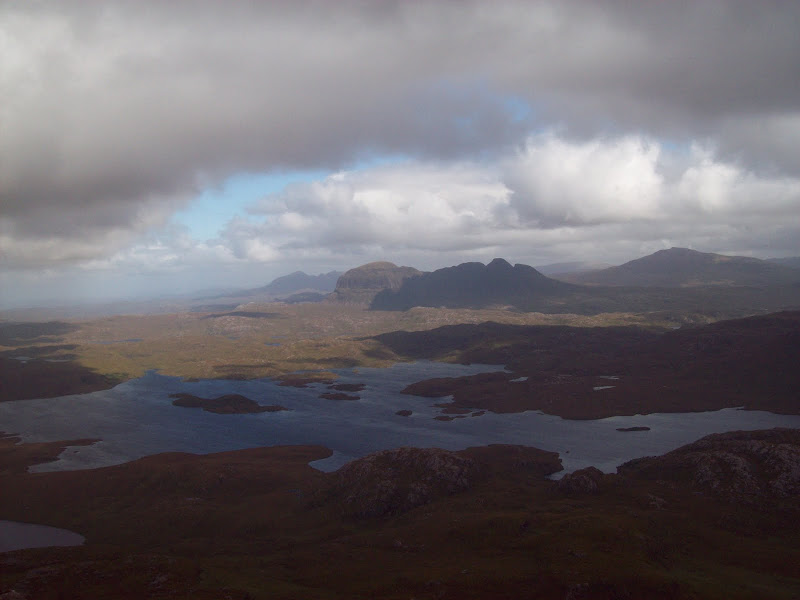 Even getting to the 'false' summit involves a small section of squirming along a ledge on your backside to reach, although this doesn't seem awkward until you actually try it. Once on the 'false' summit (only a meter or so lower than the true summit), our nemesis was in full view. 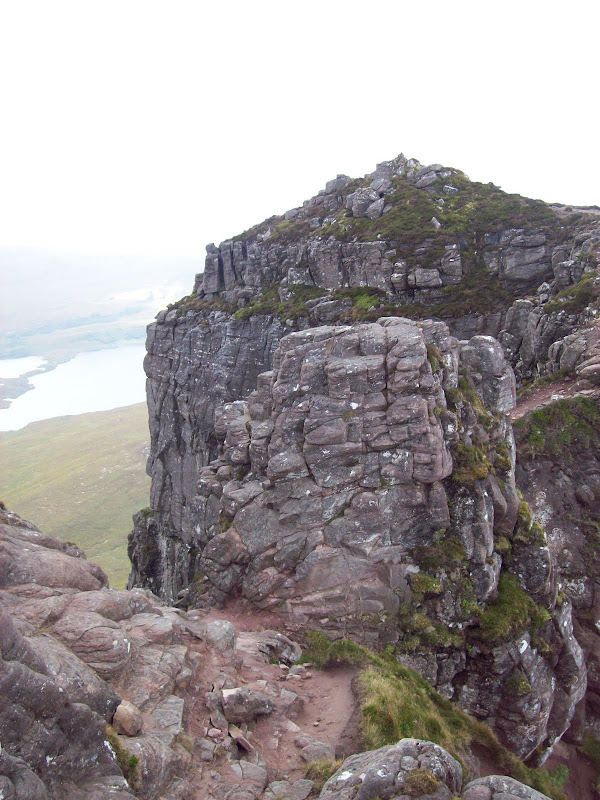 Lots of debate about this pinnacle, with some claiming that to get past it is harder than doing the In Pinn. I now believe that while one move is harder than anything on the In Pinn, it is nowhere near as exposed or committing, so I'd say it was less serious. Cuillin's report showed a good way to avoid it, but I wasn't convinced that it was any easier. More protected maybe, and possibly suiting people who are good at squirming.

We attempted various routes between us. The direct route is shown below, with Laura trying out an alternative start. That didn't really work though.

Direct line is as follows: 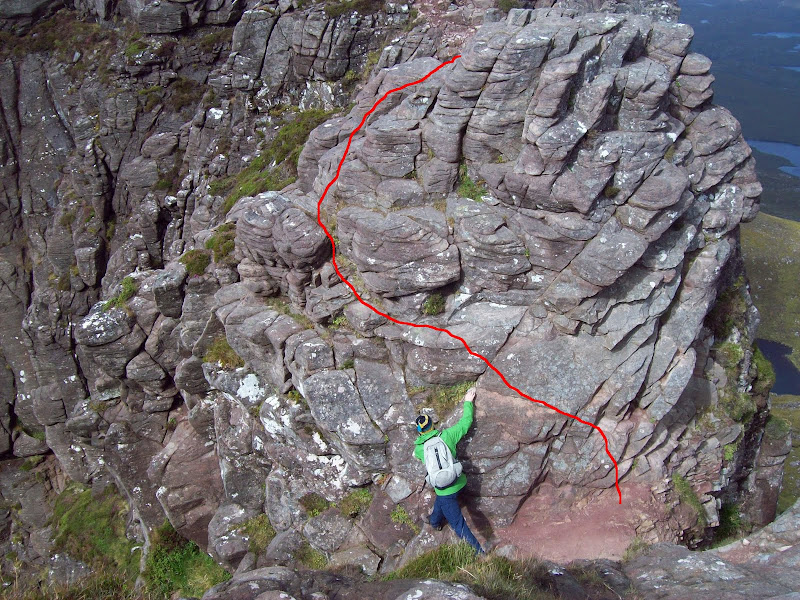 After trying various ways, she went for the bypass. 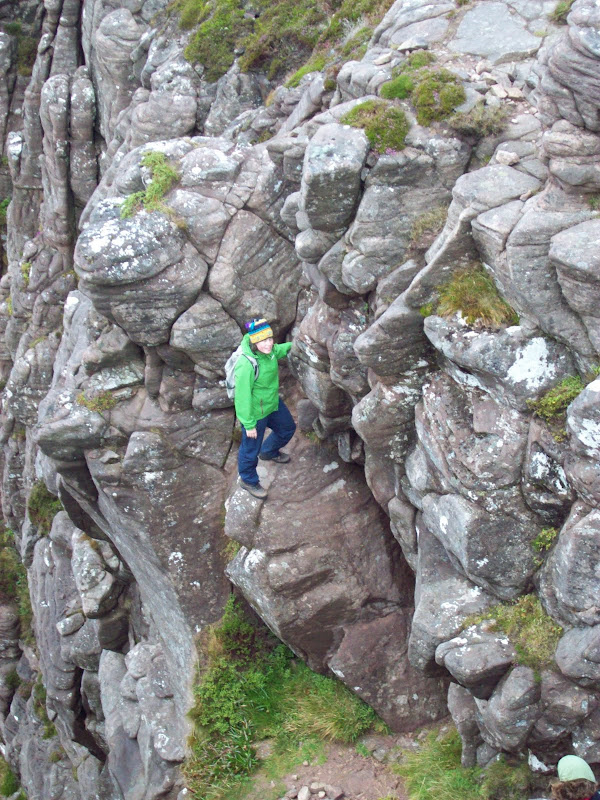 Top of the squeeze: 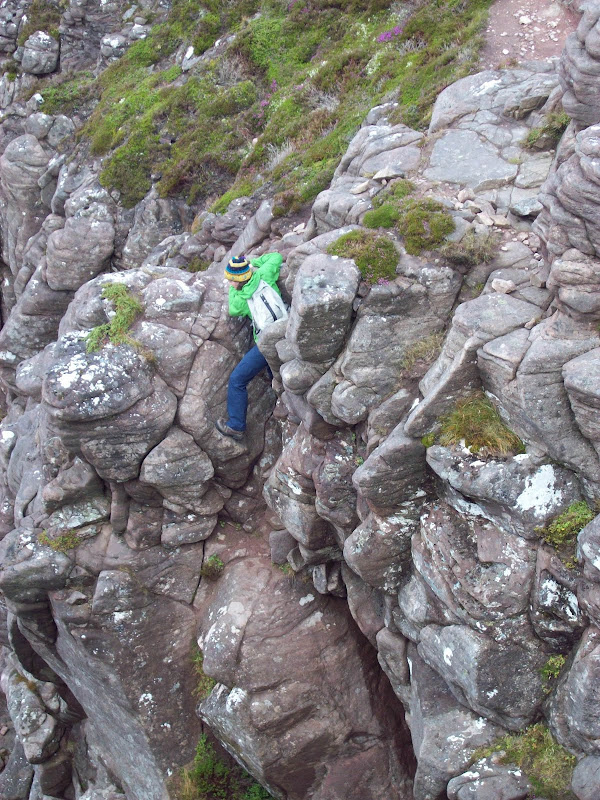 Onward to the summit: 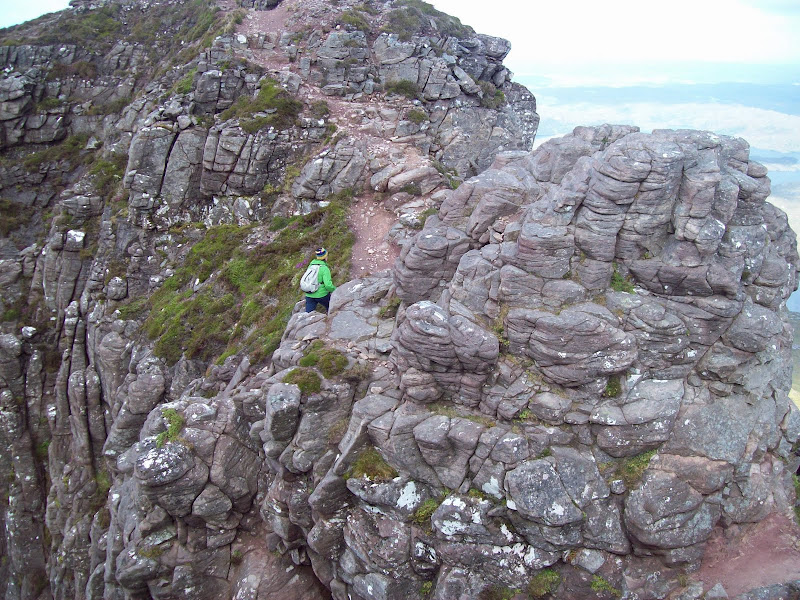 Chloe did much the same, ending up taking the bypass. By this time, Laura had come back round to the top of the direct route, and almost descended back to the start again.

Chloe has a go at the direct route: 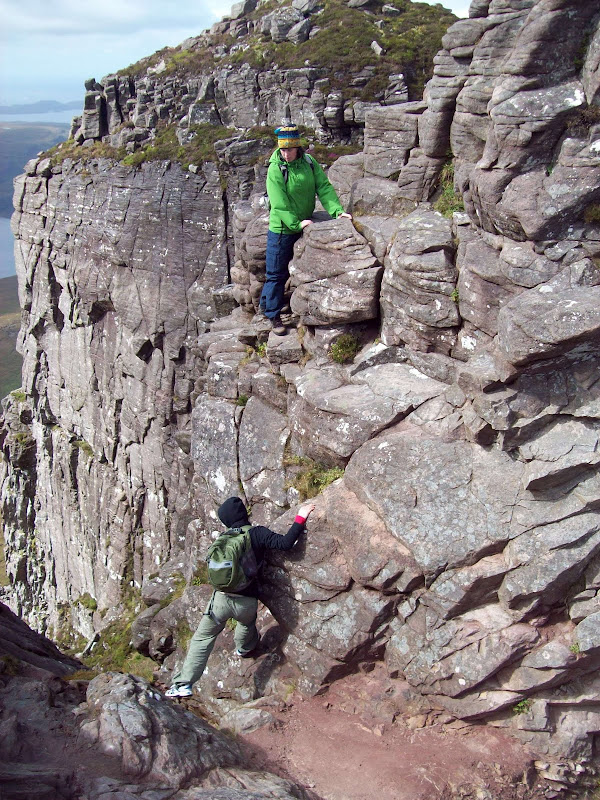 I thought I'd have a go at the direct route. I could see that the best way was to start up on more broken rock to the right. This gave the best handholds. The key move was then an awkward reach over to the left. The footholds were obvious as they were quite polished. After checking out handolds, I went for it. Turned out to be OK. With all of us up, we pushed away thoughts of how to descend and continued to the summit. While the route is easy once over the pinnacle, the cliffs surrounding the summit are massive and vertical. Not a place you'd want to fall off!

Back from the summit to Cul Beg: 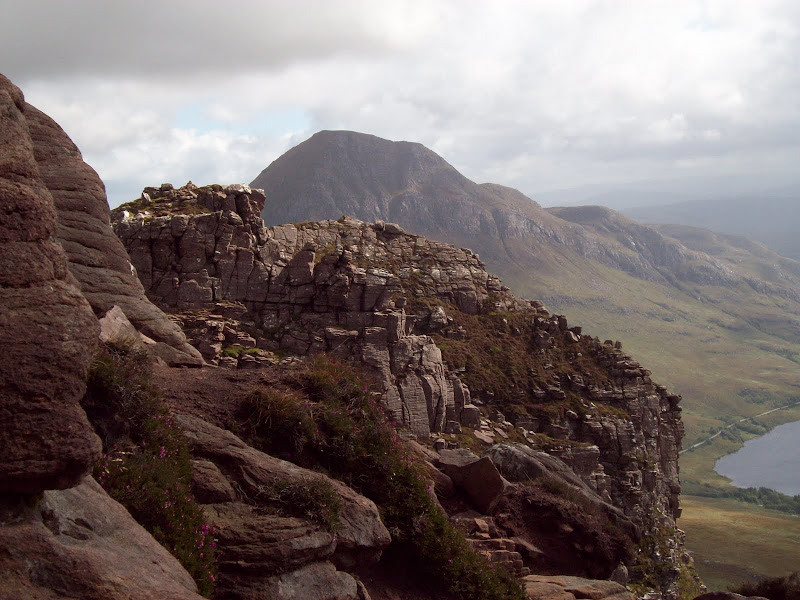 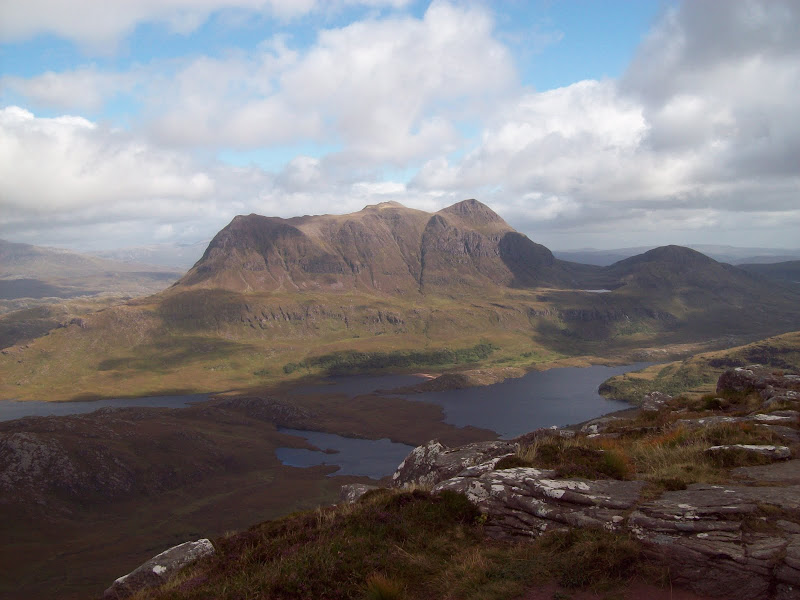 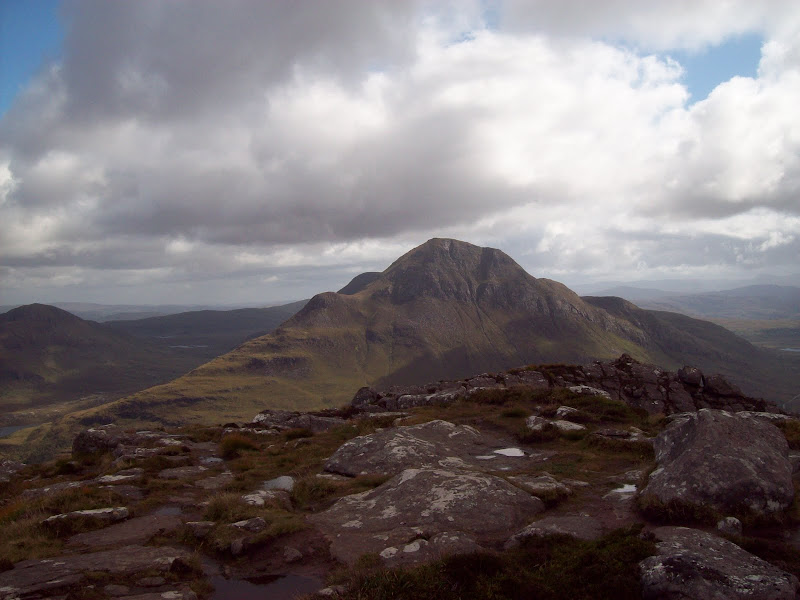 The wind was still quite gusty, so we decided we'd get the awkward return out of the way before stopping for lunch. Chloe opted for the bypass route, and descended with a controlled slide. Laura wasn't happy with that, so went back down the direct route. After a bit of hunting for holds, she made the awkard reach across and was down. That just left me. I followed the same route.

Me descending the pinnacle on the way back: 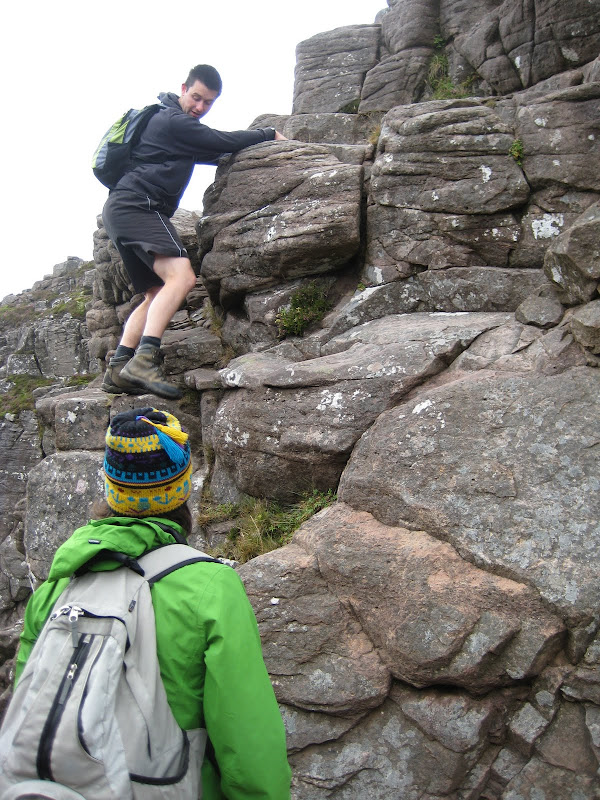 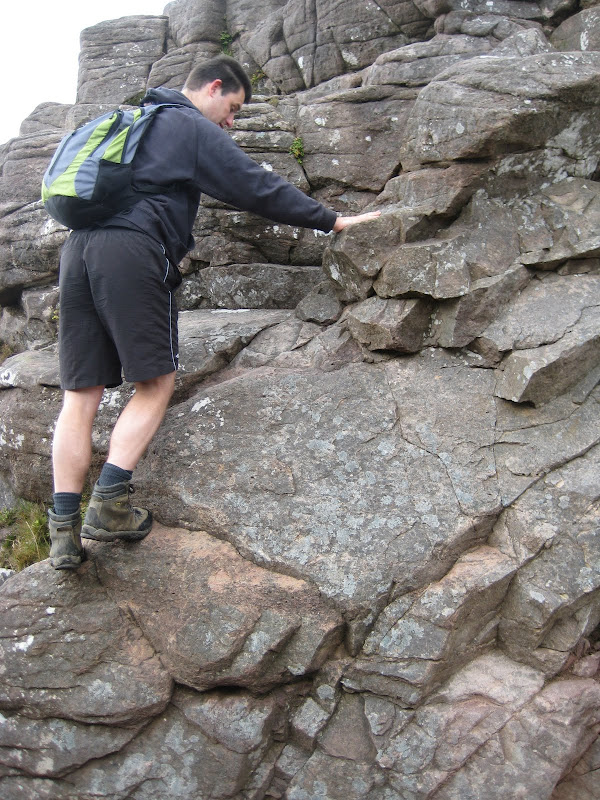 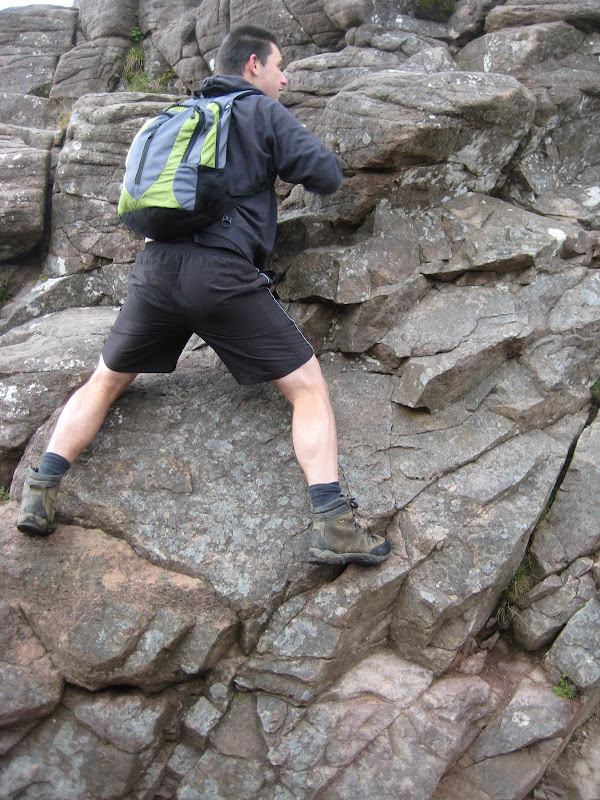 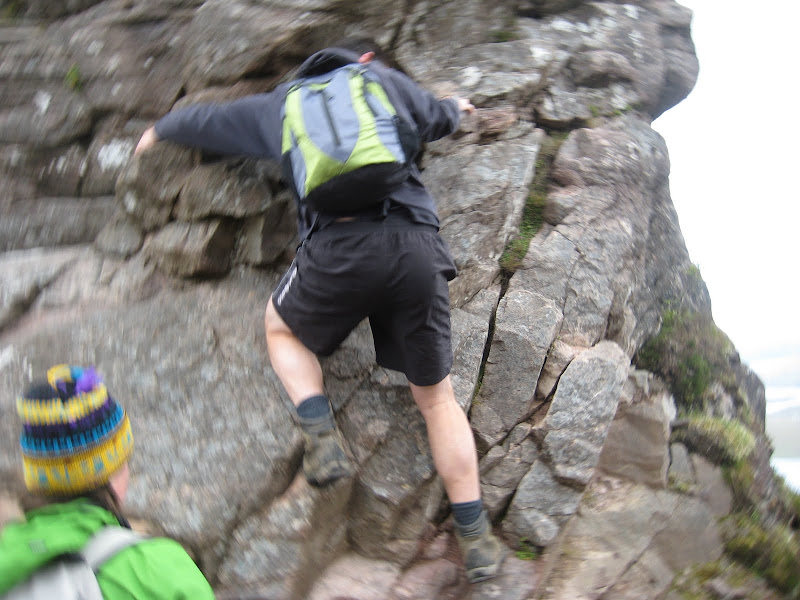 We continued back down the ridge, mainly taking the route of least resistance, before stopping for lunch near the col.

Beinn an Eoin, Ben Mor Coigach and Sgurr an Fhidlheir: 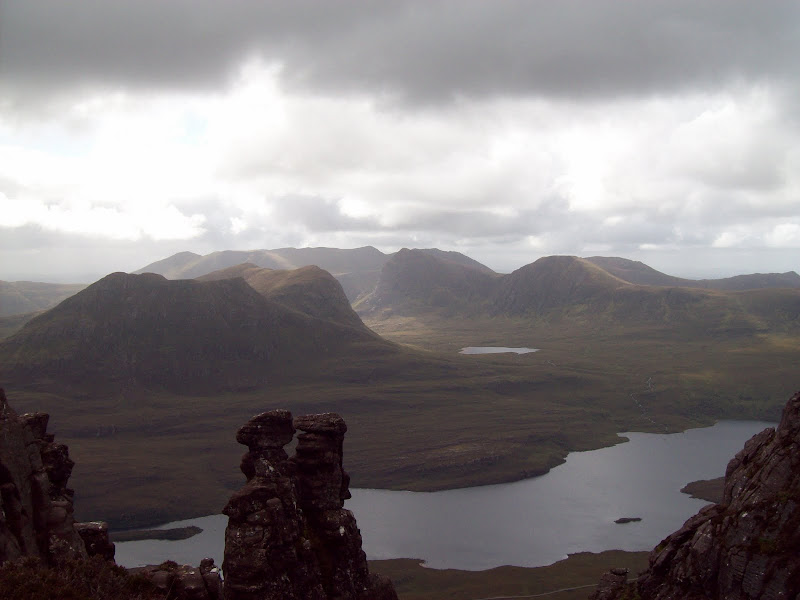 We made a quick visit to the small summit at the eastern end of the ridge before heading back west and following the path which took a descending traverse, allowing us to complete an anticlockwise circumnavigation of the hill. 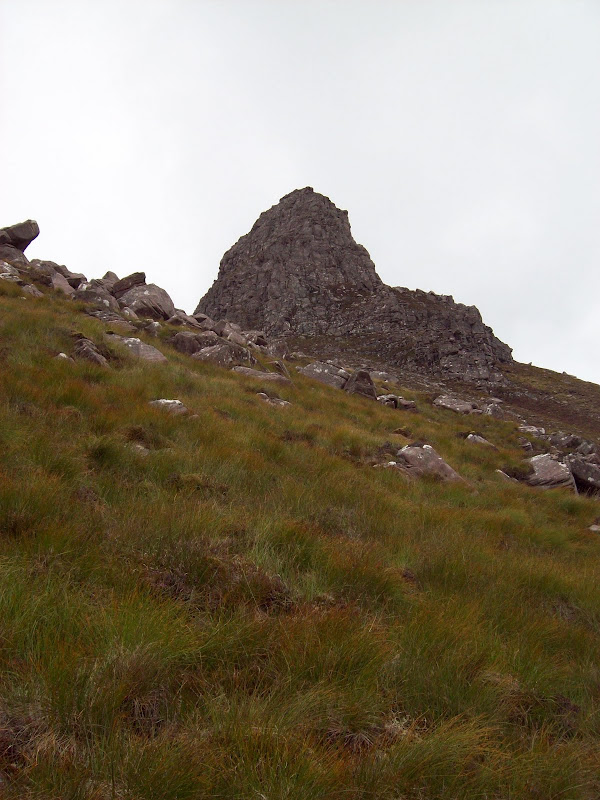 We were pretty happy with our achievement, not least as the weather had held out for us, and it definitely put a bit of a spring back in my scrambling step. The wind had mostly died away by now, and the sun was out. We celebrated by taking a trip round to the Fuaran Bar near Reiff for a pint. By now it was even warm enough to sit outside! Then the inevitable rush back to Inverness to make sure that Laura and Chloe caught their bus back to Edinburgh.

Can't think what all the fuss is about - looks a really easy scramble... if it was in a nice, flat field!

I might go up it but would never come down it so would have to book the helicopter first!

I'll show Richard it - he can have a go next month!

Great photos of that pinaccle bit, looks a bit exposed to me. Need some of those 'bravery' pills before takling that one!

Excellent stuff with some good shots of your route, it looks a hell of lot harder than The Cobbler. I saw a trail magazine You-Tube video a while back which I posted on here and they went directly up rather than bypassing. I`m doing the In Pin next summer and doing some climbing wall stuff too so might be ready for this little belter soon!

Another detailed report - a cracking hill no matter what though

The wind got the better of me last time I was there so gave up rather than risk anything silly. Have to say though, training shoes for a mountain? or were they mountain shoes of sorts!

Nice to see the hill again.

Cheers for the comments. The way is fairly obvious really, but if this report assists anyone in getting to the summit, then that can only be a good thing

MarkD wrote:Have to say though, training shoes for a mountain? or were they mountain shoes of sorts!

They were trainers. Fine for many hills in the summer - particuarly ones like this with a well made path to near the summit. For scrambling they can be good on some bits, but a bit too flexible for others. They weren't a problem here though.

Lifeonloop wrote:Excellent stuff with some good shots of your route, it looks a hell of lot harder than The Cobbler.

Don't tell anybody, but despite ticking the Cobbler off on my map, I haven't actually done the bit at the top. Couldn't work out for the life of me how to start it! Will have to go back before I try claiming Corbett compleation

Nor me - but then I quite often don't go to the top of tors on the summits etc... I'm still counting them though... I'm a walker, not a rock-climber!

And some trainers can be very grippy - they're certainly more flexible than walking boots so that's a good thing for scrambling... I do all my local scrambling (admittedly on gritstone) in trainers or approach shoes - never my walking boots...

Okay, the first photo made me feel scared immediately, malky_c, and the rest of them made me feel even more dizzy

. I'm sure it will be a big help to others

I still insist that scramble looks extremely easy... it's just the drop that bothers me!!

I've been studying it the last couple of days at work though for when I get there so I can have a go... if I can actually get that far along the ridge! God knows how I'll get back down though!

Great report Malky.... that scramble is definitely quite a bit harder than the Cobbler if you ask me!

Paul Webster wrote:.... that scramble is definitely quite a bit harder than the Cobbler if you ask me!

Not denying that at all! Was up there a long time ago, hadn't read the guidebook properly, and it was late in the evening with no-one around. Couldn't work out how to start off at all, and no-one about to follow. Turns out I was trying to get up on the wrong side of the summit - explains why I couldn't even get off the ground!

Loved this report, really interesting and exciting! So much in Scotland worth going back for.... love to do some more decent scrambling

Thnx for your reply on my report of the Eggishorn
I see some nice scramble parts too in your pictures. It doesn't look harmless if one foot slips away.
I hope the outdoor season will last for a littel while: getting restless already .....

I fancy a scamper up there tonight looking at your pics

Users browsing this forum: the bearded wanderer and 46 guests