Well, living way down south in Brighton I don't get to the Highlands very often, but was rewarded on this occasion by two glorious days on Beinn Eighe and Liathach (report to follow). Two fabulous mountains, on two beautiful days - what more could you ask for?

My route was the 'western summits', but with an extension towards the western extremity of the ridge at Sail Mhor, hoping to get a birds-eye view of the obvious chasm on it's northern flank.

I started the ascent on a stunning morning, already warm at 9.00, with mist lingering in the valley opposite. Further on the route up to the ridge line became clear, with the daunting slopes of Sgurr Ban and Sgurr nan Fhur Dubh prominent to the right. 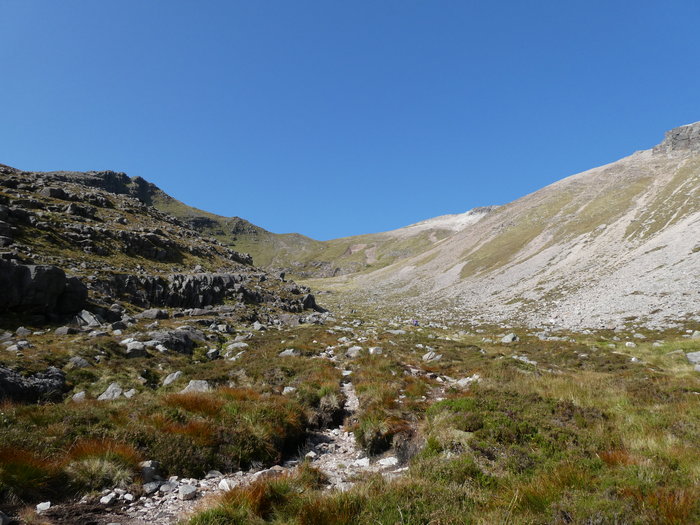 Having reached the ridge proper, a short detour east takes you to Spidean Coire nan Clach, the first munro of the day, left of picture here, with a view towards the second, Ruadh-stac Mor. 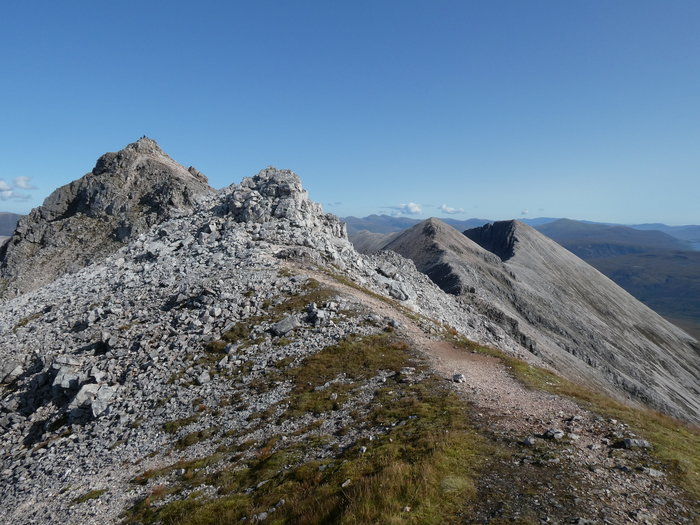 I made my way along the ridge towards Coinneach Mhor. I'd been wondering for some time whether to have a look further along the ridge towards Sail Mhor, and as I at this point seemed to have plenty of time I decided to give it a go. Coinneach Mhor is a reassuringly pleasant, grassy plateau after all the earlier bare rock, and on the way out I hugged the tops of the huge cliffs of the Triple Buttress, giving an interesting view back towards the gully which would some time later be my route down. A little further on a huge cleft opened up, with a dramatic view down to Loch Coire Mhic Fhearchair, with Sail Mhor rising menacingly above it. But at this point I found my path towards Sail Mhor obstructed, with an unappetising choice of steepening ledges and slabs or a sketchy looking gully. I don't mind a bit of a scramble but fear of the unknown set in, and I decided to beat a retreat. Anyway, I'd get a good look at it from below, from the path back to the road, I thought. Now of course I'm cursing myself for being such a wimp, because I'm pretty sure that was easily doable. But if anyone out there has done this it would be great to hear how you got on. Maybe that would be an excuse to go back and have another look - not that I really need an excuse to go back for another look at this wonderful mountain.

So now, after an out-and-back to Ruadh-stac Mor to tick off the second munro (not that I'm really a 'bagger'), it was time to take on the gully, pausing for the traditional snap of the Triple Buttress. As the route description says, the scree in the bed of the gully looks horrible and loose, but hugging the right-hand wall (in descent) you stay mainly on rock, so getting down isn't that hard. It's still a relief to finally get off the lower scree slopes though, and here I suddenly found myself in a much more welcoming, watery world after the barren ridge, refilling my water bottle with sweet, cold water from a stream. I needed that!

And there was plenty for the camera to look at too. 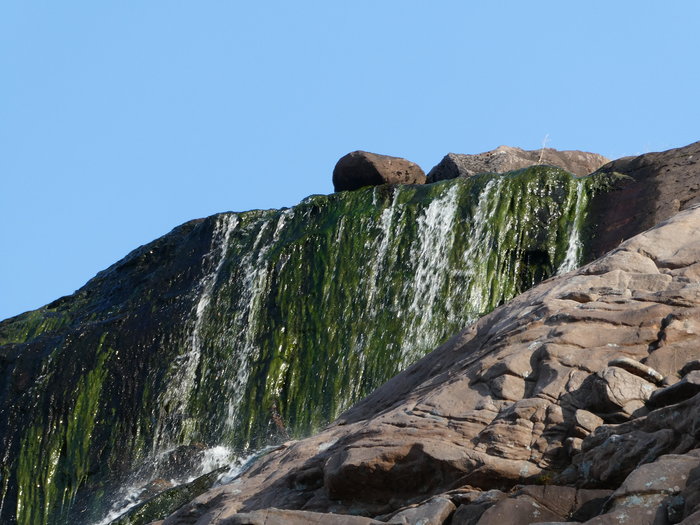 And, well, who can resist this view over Loch Coire Mhic Fhearchair to the Triple Buttress? Now it suddenly dawned on me that if I didn't look out it would be getting dark before I got back to the road - and, more importantly, the hotel kitchen would be closed by the time I got back! So I set off down the seemingly never-ending path at as fast a pace as I could muster this late in the day. And guess what - I was so intent on getting back to the road that I completely forgot to so much as glance up at Sail Mhor, I still have no idea what that chasm looks like!

This is what the rock step down off Coinneach Mhor (known as Ceum Grannda, literally "Ugly Step") looks like: 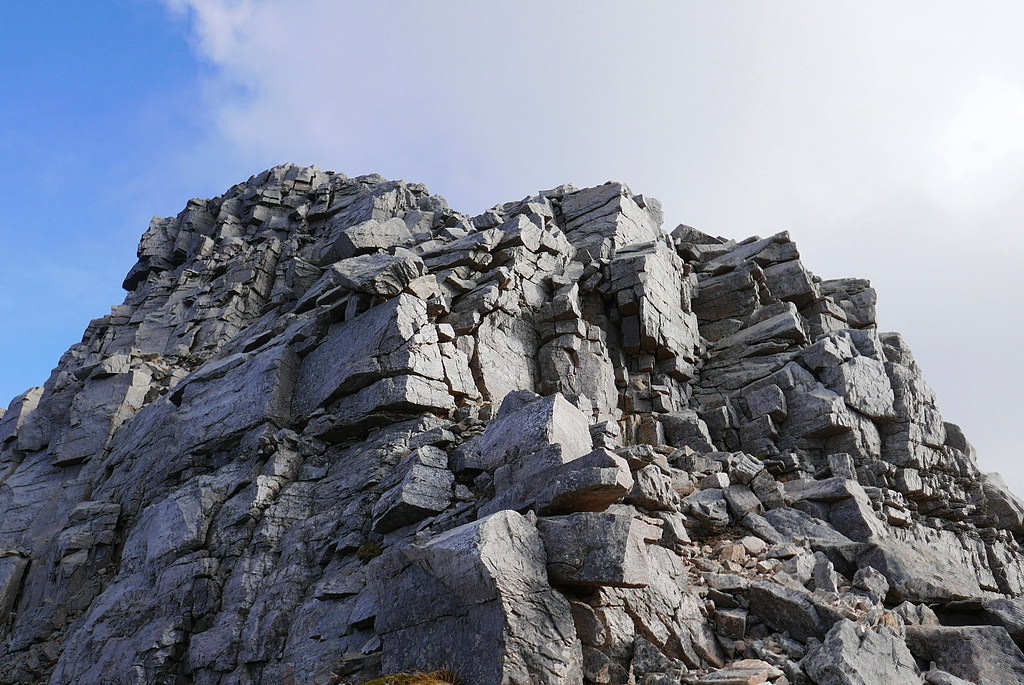 You can't see it at all from the path below! It's a Grade 2 scramble: steep, but on big positive holds. I think it would be quite intimidating in descent without prior knowledge. A gully (out of shot to the right/south) may be easier, but probably looser.

Thanks jmarkb. That actually looks like fun going up, but I didn't fancy it coming down. I'll have to go back and try the route your way round, though I think (hope) there's an easier way up to Sail Mhor than the one you chose!

You are very welcome!

brightonrob wrote:I'll have to go back and try the route your way round, though I think (hope) there's an easier way up to Sail Mhor than the one you chose!

Yes, there is a straightforward. route up the back of the corrie from the S end of the lochan.

The Ugly Step can be intimidating, especially if you can't see what lies below... We did it last year but went to Sail Mhor first (up col between Sail Mhor and Coinneach Mhor) then traversed the Step and descended via the stone chute. I found the scrambling relatively easy if exposed. Here is my report (quite long as we also visited and described in detail the plane crash site below the Triple Buttress):
https://www.walkhighlands.co.uk/Forum/viewtopic.php?f=9&t=90171

It is quite interesting that in March 1951, when the Avro Lancaster crashed into the buttress, the ridge was in full winter conditions and the rescue party had to climb the Ugly Step in strong winds and half a meter of snow

Thanks BlankPanther, I read your report too and previously knew nothing about the plane crash and wreckage - yet another reason to go back!

Yep, I too have looked at the 'Ugly Step' from above and decided it was too ugly.

I did Beinn Eighe in August, and went the conventional route up the stone shoot to Ruadh-Stac Mor and had planned to go over Coinneach Mhor to Sail Mhor, before continuing back to Spidean Coire nan Clach. Like a few others, having started descending from Coinneach Mhor, I couldn't see an easy/obvious way down. Now knowing the route is called 'the ugly step' I can understand why, looked an ugly descent!. Discretion won, so I turned back, but always wondered how to get over to Sail Mhor, so thanks for the route guidance

Some fine images in there bringing out the grandness of Beinn Eighe. When traversing around the vast Coire you are drawn into getting down into it for even more grandness.
First time that we went out for Eighe over fifty years ago we thought that Sail Mhor was the summit of the hill so out and back again to reach the true summit. Eighe is a hill that you just have to walk on all of its ridges and from several different approaches.

gaffr wrote:Eighe is a hill that you just have to walk on all of its ridges and from several different approaches.

Yes, completely agree - so much to explore on one 'hill', and thanks to the replies on here I now know I've got to get back to do Sail Mhor and the ugly step, and have a look at the crash site. And the east end of the ridge looks terrific too!