We had bagged both Mona Gowan and Morven in the past, both summits via the easiest routes, but both visits were done in cr*ppy weather: rain, wind, cloud, snow showers, you name it

Besides, I always fancied a route combining the two, so here it is. No crash sites anywhere nearby to incorporate into our walk, so today's report will be purely hillwalking on ATV tracks, paths and heather-covered slopes in the heart of the rolling-rolling landscape

The shortest route up Morven is from the east, but if joining the Corbett and the Graham, the best approach is from the west. The old military road reaches as high as 550m and one can start from the highest point of the pass but we parked in a large layby about 500m south. There is also room for parking further down the road, next to the track leading to the ruins of Glenfenzie. Wherever you start from, you will end up going up and down several times, but it's supposed to be HILLWALKING so you shouldn't be surprised!

We decided to go anticlockwise, into Glen Fenzie and past Morven Lodge, then up a track to Morven (we discovered that the whole ascent can be done by following different tracks - easy navigation!). From the Corbett we traversed back west over several tops including the summit of Mona Gowan. The highlight of the day was the visit to the Slack of Glencarvie. The circular route is nowhere near as boggy and peat-haggy as we had expected and could be even done in winter conditions if the day is long enough.

Track_MORVEN MONA GOWAN 19.6KM.gpx Open full screen  NB: Walkhighlands is not responsible for the accuracy of gpx files in users posts
The old military road also known as A939 Forecast was dry with a chance of some good sunny spells in the afternoon, but windy. Thankfully, for the time being we were protected by the surrounding hill tops so the gusts didn't bother us much. Kevin noticed that Mount Keen had a layer of fresh snow on the summit:

The ruins at Glenfenzie. From here, it is possible to take a track straight up Mona Gowan (a smaller circular if doing the Graham only), but we aimed for Morven today!

A good track leads all the way to Morven Lodge: We gained roughly 50m, only to have to lose it to reach the lodge. Morven entered the stage and it looked mouth-watering! The good track continues past the lodge and crosses Morven Burn (which could be a problem in spate, we were in luck, not much water in it) and continues up to the col between Morven and Peter's Hill:

Looking back at the buildings of Morven Lodge and the stables: 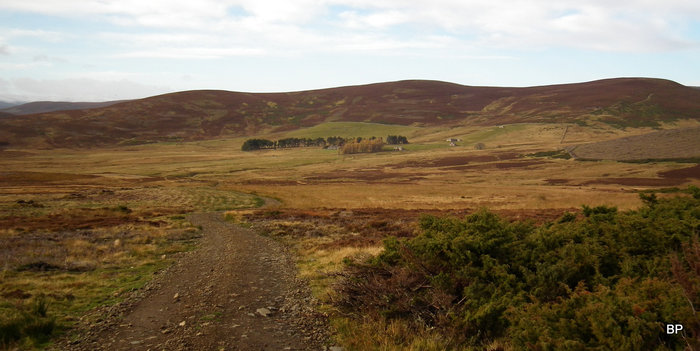 On the 1-25k map, there is no marked track to the summit, but Kevin said half-jokingly that he had a "sixth sense" there could be some kind of path to the left hand side. We continued to the top of the col (492m) and bingo! Here it was, if a bit boggy: This track, though not marked on maps, will take you all the way to the summit of Morven. It was more than we hoped for. I must relay on my husband's sixth sense more often

Having gained some height, we looked back and noticed a flock of sheep descending the track from Peter's Hill (I wonder who the heck was Peter???):

View back west with Morven Lodge framed by the lower hills, the Cairngorms on the horizon:

The summit now in sight - and the wind has picked up!

On the summit we had to wrap up in additional warm layers and cover our faces - it was blowing a hoolie! Most folks approach Morven from the east and the wide path is well worn on this side. Views are nice from the summit, but I was more interested in trying not to fly away with the wind

Eventually, we found shelter behind the large cairn to have our lunch. It was a new Corbett for Lucy (her 117th): The Cairngorms from the summit of Morven:

Having warmed ourselves with hot tea, we set off to traverse to Mona Gowan. We were walking into the wind now, so balaclavas proved useful!
We retraced our steps down the track to the 731m shoulder. From here, we could follow old fenceposts over a col to the next top (681m). Here, we encountered the only serious area of peat hags, seen here from below, looking back at Morven: We negotiated the hags carefully, descended another 150m on heathery slopes and crossed the bealach, aiming for a small cairn we spotted on a small bump before us. Here, we stopped for a short breather, Kevin took some time to adjust his boots (he was testing a new pair today and wasn't sure if he needed extra inner soles). I just admired the landscape:

We continued on the pathless but relatively easy ground over the 681m top and started descending again, this time towards Slacks of Glencarvie. We were surprised to see such a rocky little glen in the middle of the rolling landscape: One can easily avoid the steep section by going south along the edge for a short distance, but Panther wouldn't be Panther if she didn't try something crazy every time she's let off the leash The rocky tower to the right side of the photo is called Castle Wilson. Now I wonder again, who was Mr Wilson and did he have anything to do with Mr Peter of the Morven sidekick? We took some photos and admired the Slacks but a cold shower came and reminded us that we needed to move on. Days are so short now and we definitely wanted to finish the walk before darkness!
View east with Morven in the background:

The shower passed quickly and we enjoyed the sunshine despite cold wind: 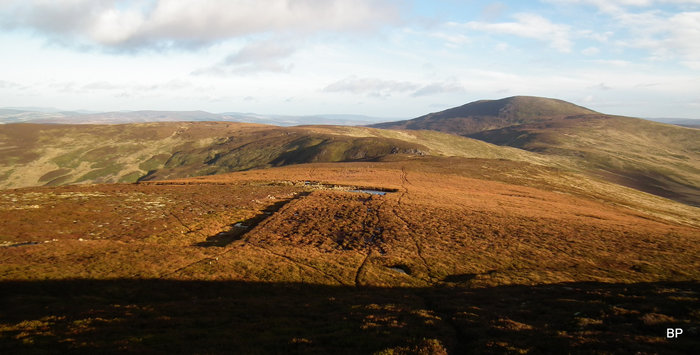 From the summit of the Graham, we still had two tops to traverse to return to the road we started from. A few peat hags, but generally, very pleasant going:

On Cairnagour Hill, we passed through another shower and as a reward for not complaining, we were presented with a rainbow: From the last top, Scraulac, a track descends back to Glenfenzie ruins, but we took a shortcut over heathery slopes, descending straight to the layby where our car was waiting. The whole circuit is nearly 20km but not on a difficult terrain. Peat hags are few and far between and the Slack of Glencarvie are a nice bonus

In my next story I'll return to wreckage hunting on the wet moors above Inverness. TR in progress!

I like the look of this route for winter .... but that would require me getting up early to do it in daylight AND the hills being covered in snow but the Cock Bridge-Tomintoul road being clear of it ..... so I suspect I'll be leaving it for summer ...

gld73 wrote:I like the look of this route for winter .... but that would require me getting up early to do it in daylight AND the hills being covered in snow but the Cock Bridge-Tomintoul road being clear of it ..... so I suspect I'll be leaving it for summer ...

In deep winter the snow gates may be closed, so it would be impossible to get to the start of this walk from Inverness side. I was thinking more about March-early April when days are longer and snow still present on the higher hills.

Good for any time of the year anyway