Sunset in the Cairngorms

Sunset in the Cairngorms


Scottish Novembers rarely offer good days for rambling over hills. It's usually rain, wind, low cloud or all three together. As experienced hillwalkers, we had our share of such days so we didn't expect much from the time off in early November. As it turned out, we were lucky with weather, especially on Friday and Saturday. Both were used for longer excursions (as much as short days allow now) and were the highlights of our autumn 2020.

Creag Mhor could be called "the forgotten Corbett of the Cairngorms" as it is usually climbed as a sidekick of Bynack More and as such, it is rarely explored in detail. Which is a shame. I can wholeheartedly recommend a separate trip to this hill and dedicating more time to appreciate its beauty.

We had visited this hill in 2012 via the usual route from Glenmore Lodge. We really liked it but it was a very windy day and we struggled to stand straight on the summit, so having bagged the Corbett, we run back down into the shelter of the glen between Creag Mhor and Bynack More (appropriately called "Corrie of the Barns"). Since then, we returned to Bynack several times (our favourite Munro in the Cairngorms, after all) but a second visit to Creag Mhor was still on our list, with a note "pick a good day - low winds, sunny". Friday the 6th brought plenty of sunshine and moderate winds so it was time to return to the forgotten Corbett!

The most popular approach for this hill follows the Lairig an Laoigh path past Bynack More to the Corrie of the Barns. We took the opportunity to walk along the wide ridge, explore the tors and rocks around the summit and enjoy the autumnal sunnshine. We had just about enough time to return to Glenmore Lodge before the last rays of sun died over the horizon.

Track_CREAG MHOR GLENMORE 26.7KM.gpx Open full screen  NB: Walkhighlands is not responsible for the accuracy of gpx files in users posts
We started from Glenmore Lodge (parking wasn't an issue on Friday) and walked past the Green Lochan. Usually, we stop here for a few minutes, but today we needed all the daylight we had. The morning was a bit misty, but by the time we turned onto the path to Nethy Bridge, the mist started to lift:

The track must have been recently used by four wheel drives (or quads?) as it was very muddy in places. Higher up, we found safer, drier ground: On the bridge over River Nethy:

Walking up the Lairig an Laoigh path is always a pleasure, especially when the sun shines and the vast views of the eastern side of the Cairngorms.
Back to Meall a'Bhuachaille:

Stac na h-Iolaire, a top we haven't visited yet. As we walked up, we discussed possible options to do it as a part of a larger circular walk including Cairngorm. One thing for sure, it will not include a return along Strath Nethy

It was surprisingly warm as for November. Kevin even pulled his sleeves up. He didn't go as far as Malky-style short trousers but it was still unusual for this time of year... 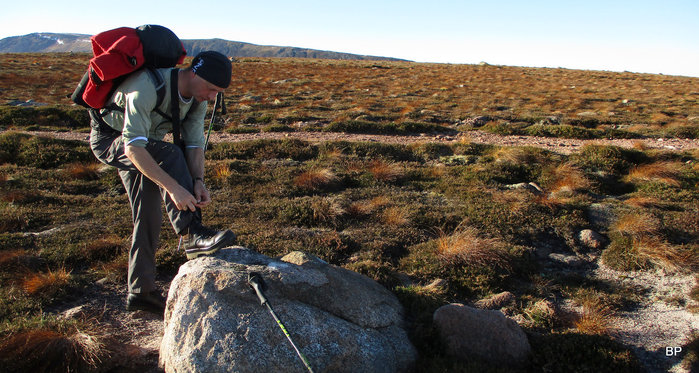 Ben Avon and Beinn a'Bhuird from the top of the pass:

The path passes east of Bynack more and descends about 50m into the glen, heading for the fords of Avon. Creag Mhor is the long ridge to the left hand side: Looking up the eastern side of Bynack More from the Glasadh crossing. Barns of Bynack well visible: We left the path before it reaches Lochan a'Bhainne and started the final ascent of about 100m to the summit ridge. The sun was low and our shadows looked suspiciously like the caricatures of the Big Grey Man. Here, my shadow pointing at the path we used in approach: A man hungry for the autumnal Cairngorms Big and Little Barns of Bynack from higher up the climb to the summit of Creag Mhor:

Instead of going straight to the summit, we took a small detour to the southern top (875m). It is topped with some impressive tors: On a longer day one could practice scrambling here, we opted for a slightly easier ascent on wobbly boulders: On the ridge, the wind was chilly but still pleasant enough to allow us some exploring. There is something special about this corner of the Cairngorms and I'm always happy to return here for more views...

The summit of Cairngorm behind A'Choinneach from the 875m top: Beinn Mheadhoin is rarely climbed from this direction:

It was time for lunch with views! We found a sheltered spot below the tors: It is worth noting, that the Big Grey Shadow Man is lurking around the ridge of Creag Mhor. I spotted him performing his tribal dance 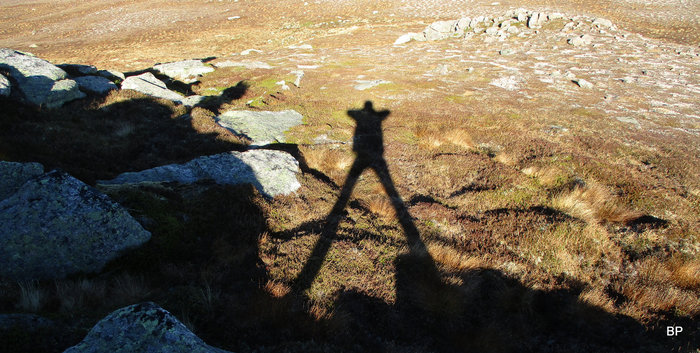 After sandwiches and a cuppa, we headed for the summit, which is the next tor when walking north along the ridge: Barns of Bynack were probably the most interesting feature to photograph... ...but the eastern vistas with the tops of Ben Avon and Stob an-t Sluichd were just as breathtaking: Stob an-t Sluichd has a plane crash site which we would love to visit. The best way to reach it would probably be from Tomintoul, up Glen Avon. We had cycled most of this route once when climbing Ben Avon from the north. Hopefully, next summer we will climb Stob an-t Sluichd and photograph the site. At the moment, we had to satisfy our Cairngorms fever with celebrating a re-visit to Creag Mhor. Lucy was here for the first time - her 118th Corbett! From the summit we continued north along the ridge to the next top called Dagrum (848m). It is topped with a set of tors, some of them of quite unique shapes: 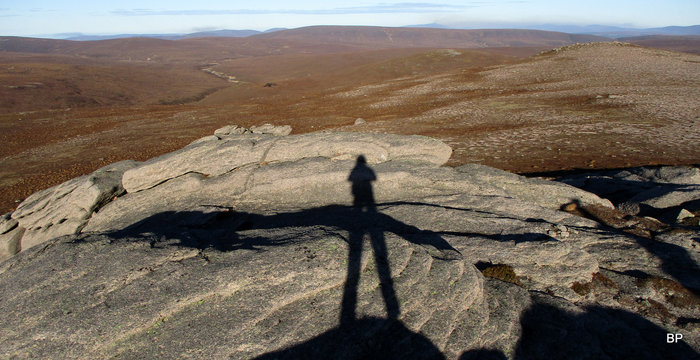 When describing the eastern vistas, I should mention a very much neglected Graham, Cnap Chaochan Aitinn. It can easily be climbed from Tomintoul using estate tracks and it is a superb viewpoint to the tops of Ben Avon. My old report HERE.
The Holes of Creag Mhor The Cats of the Cairngorms We couldn't have dreamed of a better end to the year. When posing to this happy snap, I didn't expect that our autumnal adventures were not over just yet...

To return to the path, we descended about 100m down the heather-covered slopes due west and crossed Glasath stream on stepping stones: We had a couple of hours of daylight left to return to Glenmore which we used up to the last minute. The Cairngorms looked very atmospheric in sunset mode and the good path meant we had no issue with navigation.

Our next targets in this area are Stac na h-Iolaire (just because it looks interesting) and Stob an-t Sluichd (for the crash site), but these are longer trips so we must wait till next year. Creag Mhor can be done in 6.5 - 7 hours if just walking quickly to the summit and back, but I think this hill deserves some extra time for tor explorations. And you'll most likely be alone - few people even notice this mountain let alone climb it...

On Saturday we tackled a certain route in Torridon. We had been discussing it for weeks and waited patiently for perfect conditions. TR in progress

Re: Sunset in the Cairngorms

Great photos. Moira and I enjoyed this hill when we climbed it a few years ago and loved the summit tors with holes in them.

Re: Sunset in the Cairngorms

Nice! I haven't been in this area yet - one for the post-lockdown future!