The forecast being for high winds and fairly low clouds we chickened out of today’s target, Liathach and spent too long debating an alternative. The winds being Southerly we thought Sgurr Ruadh the most suitable option. It seemed a long way to walk from the Annat in bad weather so we drove via Strath Carron. Starting out from Achnashallach station on a good road and path, we were quickly into the forest; the bulk of Fuar Tholl on the left. After the trees easing up the slope to the right, parallel to the right hand branch of the Allt Coire Lair, past a sign about the estate, we met a cyclist walking back down the path with a split tyre, he looked fed up given that today was his only free day. The ‘excellent stalkers’ path eased its way up the small valley out onto an open area where Fuar Tholl, Sgurr Ruadh and Beinn Liath Mhor all revealed themselves to be fine looking hills. 
The paths split, we took the left one, stepping across the ford of the river Lair, which would be tricky in wet weather, and over the undulations towards the bealach between Fuar Tholl and Sgorr Ruadh. The cliffs of Robertson’s and Raeburn’s buttress on the right and the bulk of Fuar Tholl on the left. As we ascended, the Maninreachan buttress came into view; there were walkers on the summit, the only ones we saw that day. We found a small rocky shelter from the wind and had lunch close to a lochan and with a good view of the great cliffs. East end of Loch Bhealaich Mhor and route to the summit Finding a straightforward route across the wide bealach was difficult, it being a jumble of lochans and slanting slabs. We took a beeline for the midpoint of the main slope and passed the largest lochan Bhealaich Mhor on its East end. There being no obvious paths up a very broad slope, we took the line of least resistance diagonally up a grassy slope trending Northwest, through rocky band and scree until the slope opens out. Towards the Northwest the most obvious rise is surrounded by scree but this was not too difficult to get through; Ben took a more eastward line and avoided the first small top, at the East side of the wide slope the tops of the big buttresses stood out above the grassy areas. 
The high winds were more prevalent at this level and, as we proceeded up the shallow sloping ridge towards the summit, got worse. Fortunately, there was a substantial summit shelter we could rest in, have a snack and take plenty of photos. The was reasonable visibility all round, but very little sun highlighting the hills, The Torridon giants almost black away to the North looked sinister. It being so windy and the route Northwards being uncertain we debated whether we go back on the route of our ascent but the thought of crossing the bealach again put us off. Instead we headed North off the peak 100 m or so and then scrambled down the sandstone cliffs, which were straightforward as they were dry and sheltered from the wind. We were onto the white quartzite mound you can see clearly from Loch Torridon; the rubbly scree was not too rough initially and the path clear until we got past the quartzite cliff to the East. The boulders got larger and the path indistinct slowing us down considerably. Once onto the grassy slope we took a Southerly turn and took an easy stroll down to the bealach path which we could stretching away to the South towards Achnashallach and to the North to Torridon. Next time we walk in from the North, more walking & less driving. 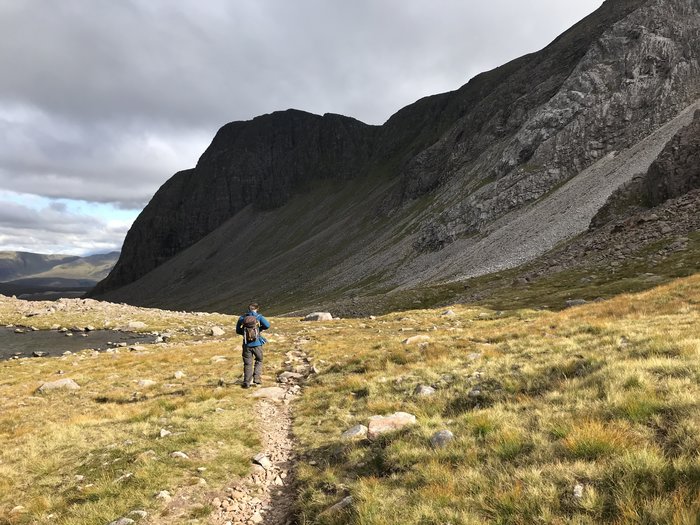 The walk out was along the ‘excellent stalkers path’ past Raeburn’s buttress pass Robertson’s, past Fuar Tholl and the end of Beinn Liath Mhor, past the carefully constructed cairn and down the glacial moraines into the forested area. An unexpectedly good day in all. We could have achieved more if we had started earlier but we will definitely be back. If we had crossed all three peaks there would have been less incentive to come back to this beautiful country.

Back to the Torridon SYH (almost dead centre in the panorama) for warmth and food. A special mention to hostel staff Matt & Em for making it so hospitable during the Covid outbreak; so professional and friendly. 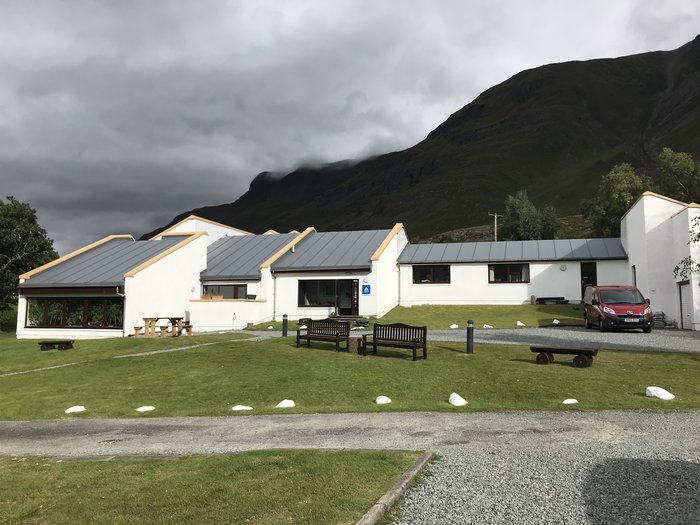 That 'pano looking North' is worthy of a Colin Prior calendar!

What a fantastic photo, Torridon really is other - worldly.

Anne, thank you. I just wondered how you managed to get that blue sky effect as seen in your great Stob Daimh report, is it a special camera or photoshop. Having spent three weeks walking in Scotland, i haven't encountered it yet!

Verylatestarter wrote:Anne, thank you. I just wondered how you managed to get that blue sky effect as seen in your great Stob Daimh report, is it a special camera or photoshop. Having spent three weeks walking in Scotland, i haven't encountered it yet!

verylatestarter - thank you!
No special camera, I was using a Lumix FZ200 , on Auto (the height of laziness, I've been shown several times how to use Manual and never do

) That camera generally takes more intense colour photos than a Nikon D500 SLR which I sometime use too ( but which is quite heavy to lug around on the hill.)

The light was great which might explain the really blue sky but I do download them to Lightroom for editing which allows you to enhance the colours/vibrancy etc. However, I don't remember doing anything much to them because there was such clarity. There is a Dehaze option in Lightroom which does tend to make the colours darker overall and I often use that.

I think it's editing the photos a bit, not too much though, that can make a difference.
The photos were also taken as jpeg not RAW images - taking the latter increases again what you can do with them during editing.

thank you. I shall pass this onto my son, who will be taking over photographic duties next time we go. I have a large file of dull photos with occasional decent ones resulting from luck.