I had a various walks i could have chosen to write about but I think i should start at one of the most iconic mountains in Scotland, 'The Cobbler' (Ben Arthur) Ben Arthur or 'The Cobbler' as it is known in da hood...

This walk was really a staff day out for me and some colleague i dragged to the hills with me, some had a little experience others had never done a walk in their life (i know what a sad existence) this meant the total time taken for the walk was probably on the generous side as there were at least half a dozens stops the total distance travelled is marked as 11.5km (this was according to a mates GPS) but we did do a lot of roaming around on the summit which may have added 500m or so.

Setting off from Edinburgh we arrived in the Succoth car park in mid morning. £1 thrown into the parking meter we were then set to climb. Weather was excellent but quite gusty. but eventually you will reach the straightforward path that leads to the Narnain Boulders. Me and 'The Cobbler' Im the one on the right of the picture....

From there we set off on the direct route up the mountain which follows the path on the left after it forks just past the Narnain Boulders (its the one that initailly crosses the stream very easy to spot) The path up the mountain is rocky but quite solid and there is a broad route to follow although there are many 'mini paths' that snake around obstructions within the route (which is about 3 meters wide) a bit of common sense will dictate your direction. Looking down the '1st stage' of the climb on the face, the part you can see when looking at the Cobbler from the Narnain Boulders. Looking up at the same point, just to give you an idea of the route/climb.

The climb to the central point of the mountain has 3 small stages the first being the longest but easy and the last the steepest with some larger rocks to climb over (no hands in pockets) but nothing too difficult and no real exposure that i remember of. North Peak and the overhang that God hangs his jacket on.

once at the top you can explore all the summits via easy, well defined paths, The north peak has a healthy overhang so be careful in bad weather. The smaller south peak is for rock climbers with no easy climbs to the top. The peak you MUST visit is the central one which follows the path to the left of the cairn as you reach the top. there is a small climb to the centre peak (no hands needed) but once there the views are great and it your chance to build up the courage to attempt the true summit. Im not a great fan of photos as they rarely do any area justice a point proven with the needle its a lot bigger than pictures suggest and most pictures of it do not show the drops The Needle (true summit of The Cobbler) Anyway.... Your here now so you might as well climb it eh? Its hard to say how difficult the climb is. For me, it was relatively easy i dont believe the climbing aspect is technically difficult at all, its the exposure and height that will soil your underpants. Im sure you have heard of the threading of the needle many times so i wont bore you of the details but what you do need to know is the part of the climb you cant see during the walk up to the needle this is the 'tricky' part, there are a couple of waist high (well if your 5'11"

The first boulder is easy in my opinion as your climbing into a sheltered section its the last bit that a little hairy as it is very exposed certainly not for the faint of heart. Looking up to the needle from the Lunch Spot. The Lunch Spot, pick a rock.

. A great place to eat lunch is just slightly to the south of the central peak a small path leads you down about 20ft into a quiet sheltered boulderfield pick a rock, sit and munch Looking back up the 'Staircase' Route, the more popular path with most visitors avoiding the harder slopes to the southwest.

The route back was the 'staircase' route round the north of the mountain, well made, easy to follow path slightly steep in some sections but im sure a lot easier than the route of ascent we chose. The path will eventually join up to the path that goes up Beinn Ime and Narnain but you need to follow it east between the Cobbler and Beinn Narnain. Once on it its a simple path back past the Narnain Boulders and down to the car park (tie your boot laces tight for the Zig-Zag walk down its punishing on the toes otherwise 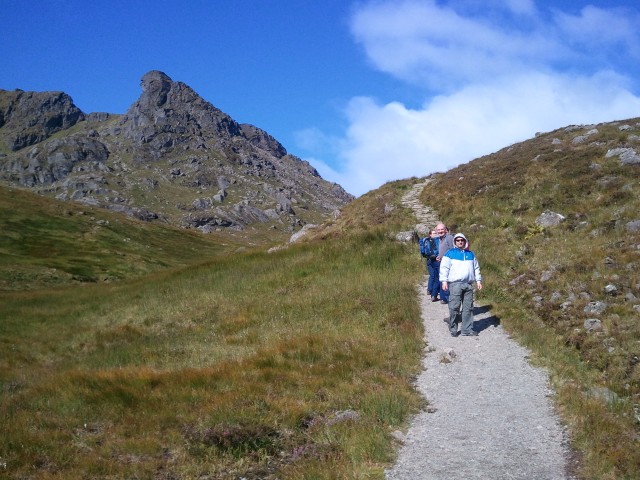 If anyone is thinking about going up the cobbler DO IT is a beautiful mountain and a far greater experience than many mountains in Scotland. Just avoid a wet/windy day if you wish to attempt the needle... if your not a confident scrambler.

Re: Where better to start off? Re: Where better to start off? - The Cobbler