our_route.gpx Open full screen  NB: Walkhighlands is not responsible for the accuracy of gpx files in users posts
Set off for Arrochar on a really chilly November morning arriving at the Succouth car park in decent time. We initially followed the Cowal Way track, before heading off on track that runs alongside Allt a' Bhalachain. Exiting the trees, and coming over a slight rise, the impressive bulk of Ben Arthur dominates the view. We carried on past the Narnain Boulders, aiming for Bealach a'Mhaim. Beinn Ime from the bealach.

Our initial thought was to ascend Ben Arthur first, before carrying on to Beinn Ime, but the amount of walkers heading up and down Ben Arthur changed our minds, as we didn't want to get caught in a jam at the summit. Down towards Rest and Be Thankful. We followed the long ridge of Beinn Ime, which had a nice gradient to it. Unfortunately, there was a cap of cloud on the summit which remained there all the time we were up there. As well as the cloud, there was a hard frost on the summit, so we didn't hang around, descending back to the bealach, before taking the faint path up the body of Beinn Narnain. Across Beinn Ime to Ben Vane. Because of the hard frost, what might have been a fairly boggy ascent, was made much easier

the summit soon coming onto view. 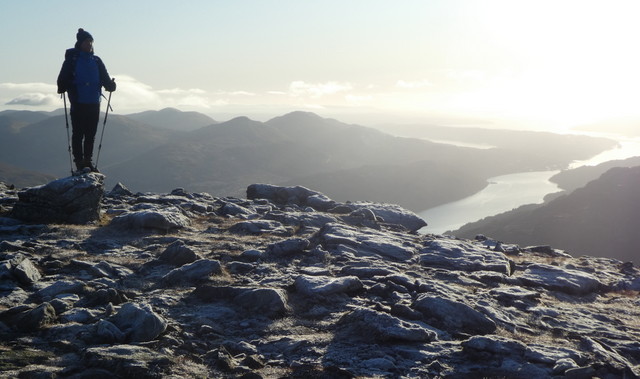 The cloud had started swirling in from the North, and I was lucky enough to enjoy my first brocken spectre, as we headed down. At the bealach between Beinn Narnain & Cruach nam Miseag, we noticed a faint track heading down towards Narnain Boulders, so we took that route. Not the most even of routes we've ever taken

but it didn't pose too many problems Once back on the track, it was a nice stroll in strong afternoon sunlight back to the car park.