It was with an uncharacteristic reluctance that I slowly blinked my eyes open on a frosty morning. Perhaps that's the effect of weeks of lockdown but as I set off along the Dunbeath river and climbed up to the 'top' of the village the sun crested the brae and nature had delivered her cure. 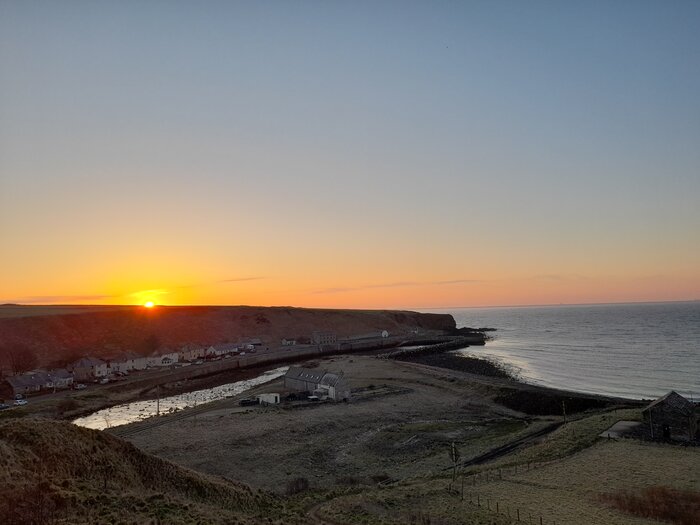 Only a delivery driver at the Post Office seemed awake in Dunbeath at that early hour and the trail drew me into the woods that flank the entrance to the privately owned castle. A coal tit flitted amongst still-bare branches, a startled pheasant shattered the chilly stillness yet something about this route felt wrong. It was, I realised, the coast or more properly the distance from it. Having journeyed along the trail from the north I hadn't thus far been any distance away from the cliffs (often on the very edge of them) and to be truthful I still wasn't, but the change from coast and open sea to a pleasant copse of trees was pronounced. Maybe I was simply still waking up! 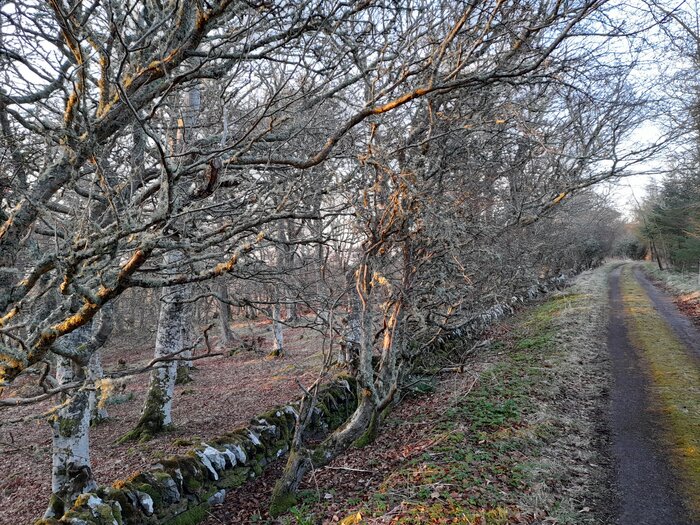 Soon however I made my way across a field and the comfort of the cliffs. Well-made stiles have been put in along here and steadily the trail will improve but something of the wildness will hopefully remain for there's an ingredient there that contributes much to the whole.
Nowhere else in Caithness do I remember seeing sheep creeps set so frequently in the dry stone walls. Mostly they were blocked off with a flagstone but at one point further on I would crawl through one - a new experience for me! 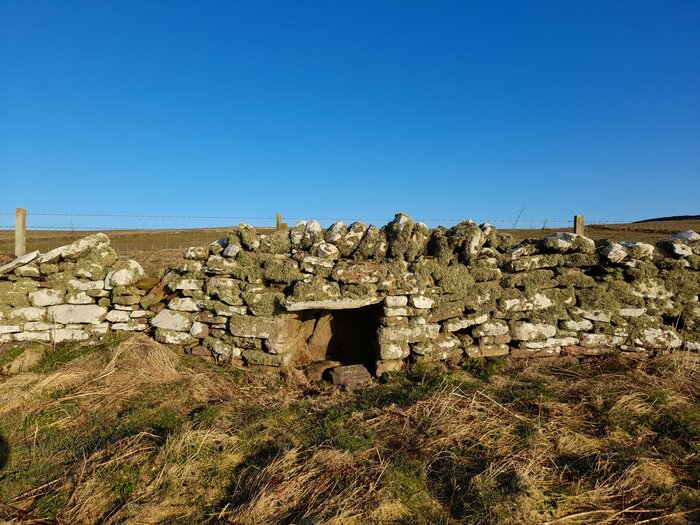 Now, looking back, I could see the fine sweep of Caithness coastline that runs to Clyth Ness. This was the view the young fisherman Finn would have seen in Neil Gunn's great novel 'The Silver Darlings'. Set mostly along this way it's a story that transports you back to the days of the herring boom and the crofters who lived and worked in the straths inland. Yet it's also about more than that with the great universal theme of the journey through life - isn't that what we take from walking? 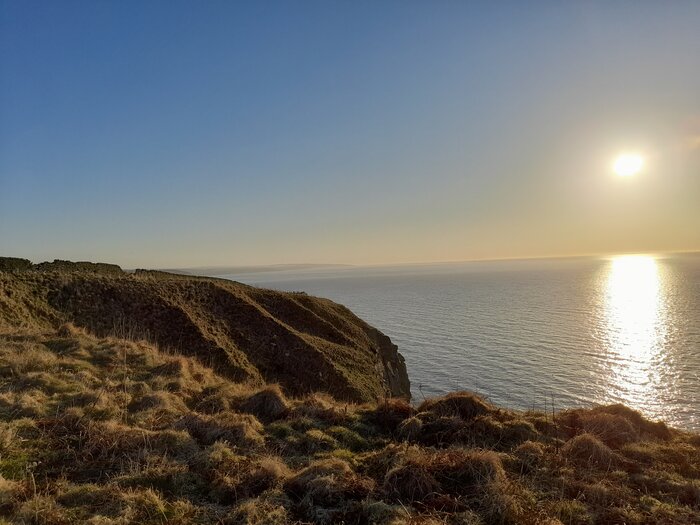 A great sweep of open coast fails to diminish the individual beauty of a yellow primrose . The sun was now shining bright across the Moray Firth and this wee plant - that had survived its winter dormancy being lashed by the foulest weather - now opened the first of its blooms to drink the energy gifted it across 92 million miles. 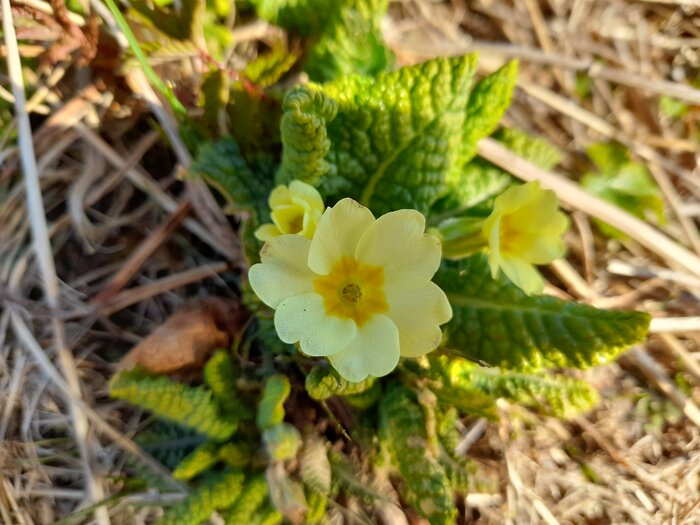 The Clett is a fine sea stack and with the tide well out it stood with its brief connection to the mainland preserved. Features like this hold the eye on a walk. Steadily you draw towards them, perhaps they draw you, eventually they pass behind - progress yielding memories. 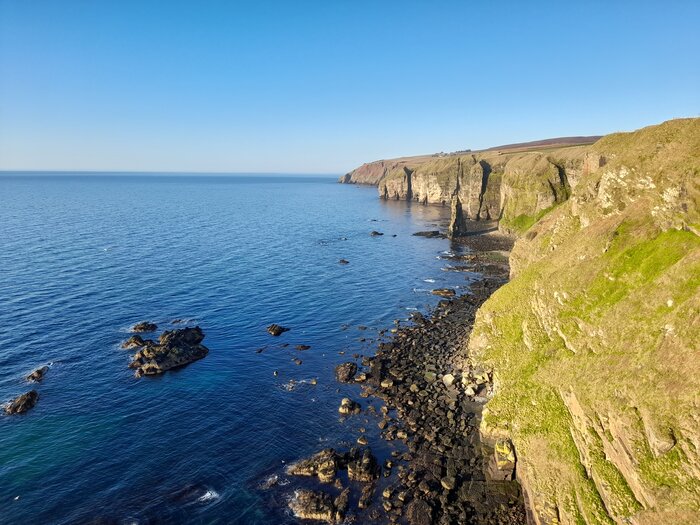 The day continued to warm in the sun and pressing on I pondered making a stop for a drink and a bite to eat. On cue a fine stone seat presented itself with an excellent view of An Dun. This is a headland that has a slit forming the narrowest of natural arches. Seabirds lined the ledges below me and at this time of year they were busy. It was like looking down on a city at rush hour, though the aroma was not quite the same! Along this coast one impressive feature is quickly challenged by another to be your favourite. Pausing briefly by some violets I admired a wee burn that chuckled away to itself as it tumbled over stones in a miniature waterfall. What can we learn from their ability to quietly maintain unassuming beauty within a landscape that at times must near overwhelm them with its challenges? 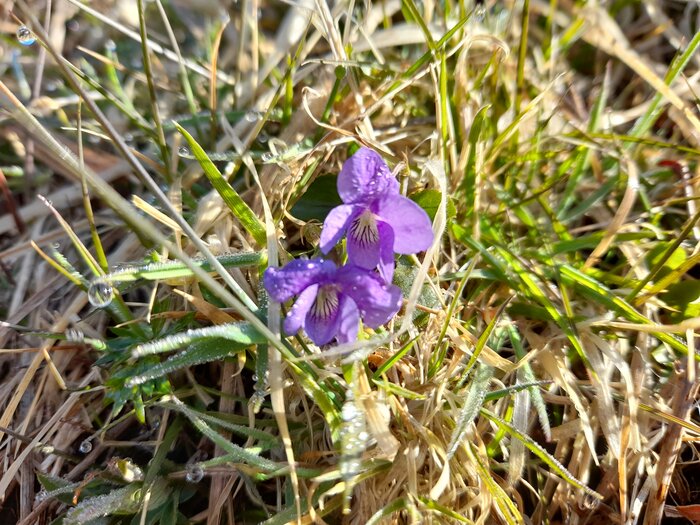 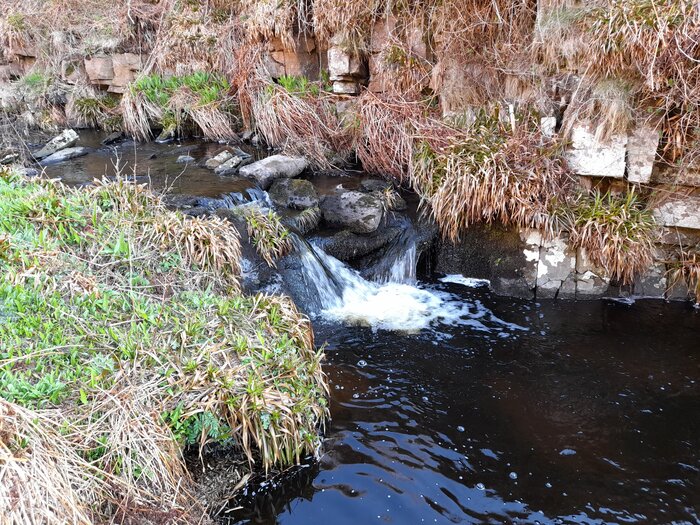 Such philosophical ramblings floated in my mind as I pressed on south. Then pausing briefly to look back there was that same little stream, now a great cascade of lace-like water pouring down into the sea. It had kept its finest moment to the very end. 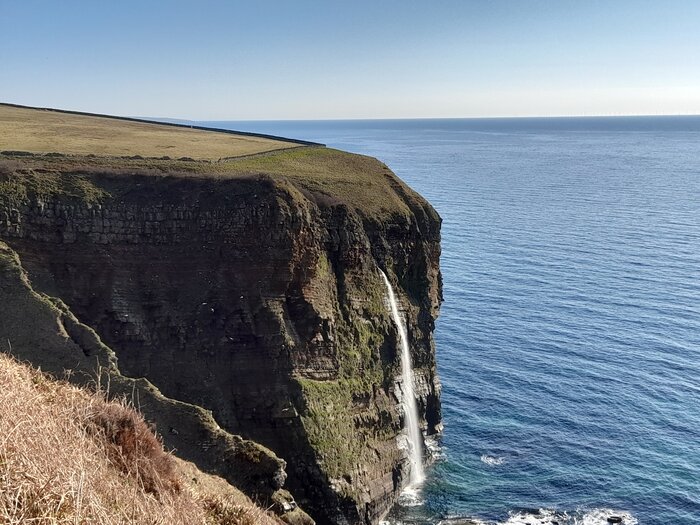 A head popped up. As I'd made my way along another stretch of drystone wall I'd had the 'I'm not alone' feeling. The owner of the head struggled to see over the wall but it was becoming a day for appreciating little things. 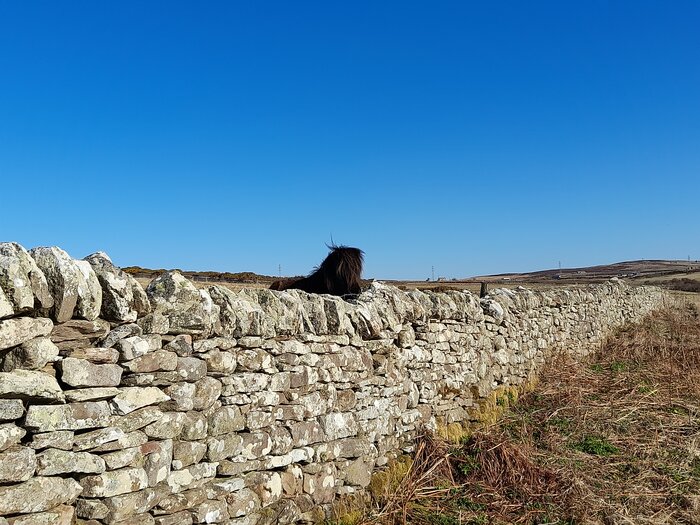 A patch of brush and gorse was easily navigated through, songbirds gave musicality to the scene, sky and sea were vibrant blue. Again the views back were to that great sweep of coast, this can only be inviting to the north-bound walker. Below me looking south there were many rocks and reefs slowly covering with the incoming tide. Lobster territory to a former fisherman! 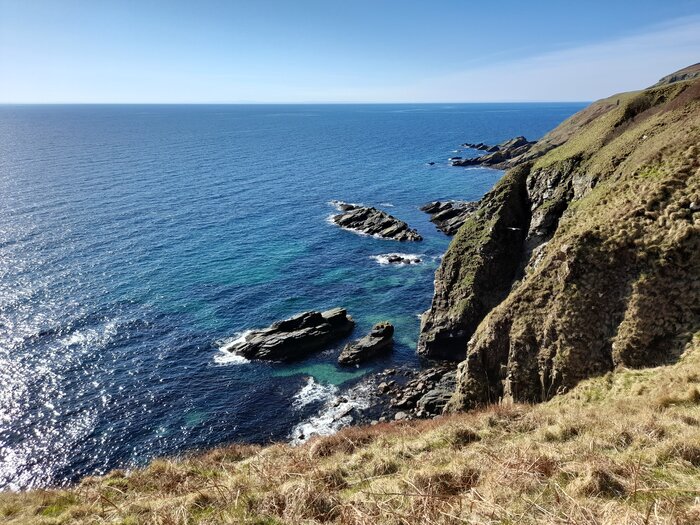 The A9 is never far from the trail along this section but never did I feel its noise a problem. Its newest section - a sweeping bend that dealt with the old problematic hairpin - suddenly appeared before me. I paused for another coffee from the flask and watched the traffic for a while - not too dissimilar to the sea bird traffic at An Dun.
A rope strung on poles guided me down the Berriedale slopes to the shore that so many (myself included) whizz past again and again. The rope worked well but I can imagine the vegetation could be a nuisance in high summer. Kittiwakes were making a real clamouring racket but this was there home for the season, I only a visitor. Peaty water flows into the sea here and as I crossed the swing bridge I made my way past cottages to the war memorial. Beyond, inland, are the Caithness hills of the Scarabens, Morven et al. Another Caithness and a fine one too. A phone call soon had me picked up and heading back to Dunbeath. From the car I could look over to where I'd journeyed, when you walk a route you ever after see it with renewed vision. Let's keep walking...

I've got a couple of stages of the Speyside Way to do still, and one final bit of the Moray Coast Trail ...but after that, I really need to do some of the John O'Groats Trail, your reports on various sections have been enjoyable.

(There again, I might not be waiting until finishing the Moray Coast Trail and Speyside Way if Moray goes into a local lockdown the way things are there just now!)