This was a walk that I had been very much looking forward to completing for some time. I'd intended to do it on my last visit to the Lakes, but on that occasion the weather had been dreadful. It was much much better today, much colder but drier and with far better visibility.
The map, mor or less, shows the route that I actually took on the day. It's for my records, it's not a recommendation, at least as far as the start is concerned. I blithely set off from just outside Stonethwaite on the Langstrath path (the one I would be returning on,) ignoring the fact that I really needed to cross the Stonethwaite Bridge and get onto the Coast to Coast path in order to approach Eagle Crag from the side that I intended to climb it. It's a very nice walk, but I was fortunate that I was able to find a way across Stonethwaite Beck (the water level was very low) otherwise I'd have put rather more distance on my walk. I also took the well made path that crosses Martcrag Moor, (not indicated by my plots".) Eagle Crag from above Stonethwaite Beck (on the right path!)

I'd already decided not to tackle Eagle Crag direct, the weather was cold and windy, with snow and rain showers forecast, especially as I was on my own. The route around the back of Pounsey Crag was straightforward enough, no problems. A couple who arrived on the summit having taken the direct route arrived somewhat ashen-faced. Clearly that route's not for everyone. Looking back towards Stonethwaite from above Greenup Gill on the slopes of Eagle Crag. The way on to Sergeant's Crag looks impressive, but if you stick to the wall, (don't cross it,) and follow it for most of the way it's fine. 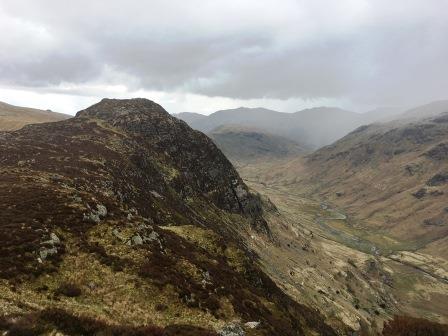 The walk on to High Raise, about a mile and a half away, is a vary straightforward walk, although the path is a little indistinct in places, probably due to the number of options. 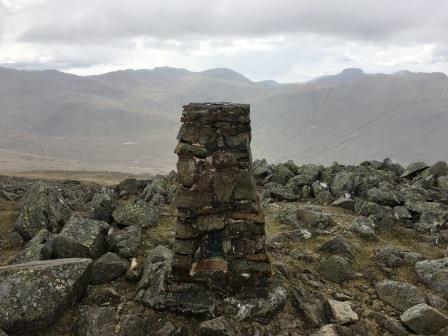 The obvious return route is to descend by way of Greenup Gill to Stonethwaite, however I have been walking the Cumbrian Way (both the main route and the mountain alternatives) doing one section at a time and hadn't completed the section from the top of the Stake Pass down Langstrath to Stonethwaite. This was a good opportunity to complete it. As a result I dropped down by way of Martcrag Moor to the top of the pass. Borrowdale from the top of Stake Pass looking down Langstrath.

The path is much longer on the ground than it appears on the map. This section of the Cumbrian Way has a well engineered path that descends by means of a considerable number of "hairpin " zigzags to the valley bottom.
Quite a long day, and fairly tiring (but then I am nearly 70, and was walking on my own) but a really good one. A brilliant end to my week in the lakes.