Compared with the North side of the glen, I never seem to have such successful outings when I head South towards Glen Artney. I don't know why I keep doing it, but it's rather as Benjamin Britten famously said " I have to keep playing a bit of Brahms now and again - just to remind myself what a bloody awful composer he was" our_route.gpx Open full screen  NB: Walkhighlands is not responsible for the accuracy of gpx files in users posts
So knowing the "back" way into the woods https://www.walkhighlands.co.uk/Forum/viewtopic.php?f=9&t=97934
I crossed the golf course, headed under St. Fillan's mount, through the gate along the delightful track and across the burn: but catastrophe But NOT through the hole Looking back down
I'm sure there were places where someone not so Past their sell by date could have climbed over, but most of the fence was "rather wobbly" so I wasted a lot of time walking round outside it until I came the stile I had climbed over seven years ago. it had been wobbly then but now it was seriously delapidated with wooden slats falling off Stile - not in good condition at all

Still, there was no alternative, so clipping my sack to the fence in such a way that I could recover it from either side, I attacked the beast and eventually surmounted it

I walked easily along the big track and met two people who were returning from the hill. They were headed all the way back down the track to Dundurn and then back to St. Fillans on the cycle track, which to me seemed a lot of distance to avoid climbing a fence. We chatted for a while, but foolishly I forgot to ask them which way they went up the hill, as the view from the point where the track heads L was of a steep hillside covered in mossy grass and (mainly) thick heather - and that's what I remembered from last time No obvious line of ascent

There was a nice view in the opposite direction towards Beinn Fuath and Am Bioran
I intended originally to head to the end of the track and climb up the valley behind - the way I later descended - but a path heading diagonally L up the hillside took my fancy: however, it turned out to be just a deer track and eventually petered out; so I was reduced to thrutching up the heather Looking back down the promising looking track A view back down to St.Fillans with the Tarmachan and Ben Lawers peeping over Views from the Summit Loch Earn with Meall Ghaordaidh and the Tarmachan ridge behind Zoomed - I can see the roof of my house, but the bedroom window is just too low to see the Trig point - i've tried with Binoculars East down to Comrie and the vale of Earn 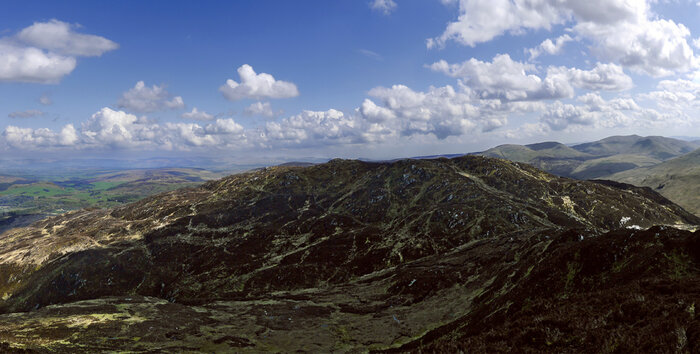 South to Ben Halton - I had planned to include this Graham top but I'd already taken an age, and I still had to work out a way back over the fence so I chickened out A bit further R: behind are the smooth hills to the S of Glen Artney and beyond the Highland Boundary Fault I followed quite a good little track S which led steeply down towards the saddle below Ben Halton. Nearing the saddle -looking down the unnamed glen heading towards Comrie Another view of the hills beyond Glen Artney - rather than descend all the way, I headed R at this point The grassy slopes were a mass of primroses and I made it easily down to the top end of the forest track
I continued down to the stile, but being tired now I really didn't fancy a return crossing. On the other hand hand neither did I relish the idea of the long descent to Dundurn and the walk back along the tarmacked railway

Fortunately a few metres North of the stile a new firm post had been added beside a wonky one and I managed to cross the fence without difficulty:D Looking down the lower section of the glen
The last time I had been here the bracken had been above head height, but the track was now quite clear and easy to follow: in fact it has become more distinct over the years - no doubt as the interest in Grahams has blossomed.
There was one more stile to cross to get on to the golf course, but it has recently been rebuilt and presented no problem

Gordie12 wrote:When I read your reports on this hill I always feel as though I am intruding on some sort of personal battle that you are determined to win

I have to admit that at my age I do feel a bit nervous about climbing over deer fences on my own - particularly wobbly ones: it's so easy to catch a boot clip in a wire, at which point you have to unlace the boot and get your foot out - all probably in a very precarious position

No problem if you have someone with you