Checking the weekend’s weather showed it was a day for the hills on Sunday. Had an early night on Saturday and managed to get a space at the Falls of Cruachan station at the layby running parallel with the railway line just before 8am.

Heading under the railway, the steps head up before ending abruptly. From here, a path makes its way through the trees and despite the ground being dry, it was steep and slippy at times. This wasn’t the biggest concern for me though, the sunlight radiating heat off the ferns was unbearable, my fleece was packed away for the rest of the day ten minutes in. 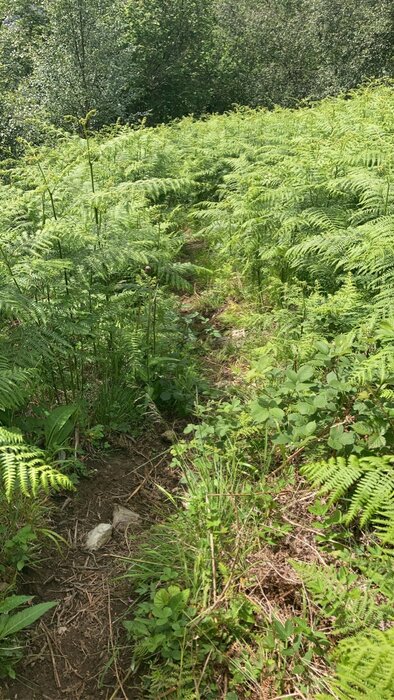 Ferns - photo taken on way back

Gaining altitude, an electicity pylon is passed and you go through the gate leading onto a road where you are eventually greeted by the Cruachan dam wall. Scotland’s longest loch was at this point in view when looking back. There was a production set in place as there were heavy duty cables and apparatus strewn alongside makeshift signs advising walkers of where to go around some temporary structures in place.

The path then leads to steps that climb to the top of the wall, head left to end and turn right immediately and head up and merge back onto the road which keeps to the western banks of Cruachan reservoir. Keep going beyond the reservoir and there’s a stream at your left with a cairn marking the way up to Coire Dearg. Two fence posts kept catching my eye in the distance and turns out this is where I was aiming for, the bealach between Meall Cuanail and Ben Cruachan. This point forms the shoulder to the munro summit. I then headed north and it was hands-on at times as I continued upwards over the broken boulders. On the shoulder looking down. Progress was slow at this point.

Under the watchful eye of a ptarmigan. 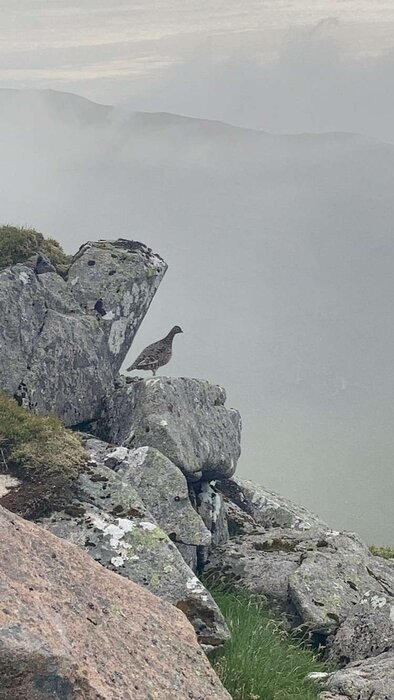 The summit is marked with a cairn and the remnants of broken trig point of the Vanessa variety. The first I’ve encountered one of this kind, albeit, broken. Heading down, I had to drop down to my right to find the path. I could get clear glances of Drochaid Ghlas at times but cloud often swept in and obscured my views. There is also a scramble to negotiate on some slabs after coming down Ben Cruachan with the option of a bypass further down before reascending. Being on my own I was more comfortable taking the drop in altitude. It’s when up on ridgeline you can view how formidable a peak Ben Cruachan actually is, I couldn’t really see on the approach because of stubborn cloud, although, probably the angle had something to do with it too. Ben Cruachan from almost Drochaid Ghlas photo below. I then included the munro top of Drochaid Ghlas before heading back to the cairn and taking the very loose descent before making reascending up to Stob Daimh, a large cairn marks the summit and I had been on the go for over four and a half hours at this point. From here I completed the horseshoe ridge by heading onto the cairns at Stob Garbh and the point marked 947 on the map before crossing onto the lower levels of Beinn a’Bhuiridh. I freely admit I lost the path at this point and boy did it frustrate me. I was high up, possibly 600m on the NW of the said corbett and tried making my way down on occasions while heading in the right general direction. I had to at times go back up as it was far too steep and keep moving round before heading back down, then back up if necessary as the steep ground was rampant. It must be a common error as on the muddy patches several footprints were visible. It was a warm day and the sweat was lashing off me and I just knew the problem was going to be exacerbated when heading back down the dreaded ferns towards the railway. I eventually got back on the path where I went back through the gate and the probably 30°+ heat of the forest where I skited twice without actually falling over. It was now 1445 and was an enjoyable day. I would gladly return and do this route again in the future.

Re: Brace of munros by hook or by Cruach

Users browsing this forum: A Langford, Lournieloon and 29 guests