Our desire to visit plane crash sites was bordering on obsession so Kevin decided it was time to do something different. The alternative route to Sgurr Mor (the Fannichs one) had been on our to-do list for some time, certainly since our visit to An Coileachan and Meall Gorm from the south. Our idea was to traverse to the "Monster" via Meall a' Chrasgaidh and the connecting top, Carn na Criche. This is less popular way of approaching the highest Munro in the Fannichs, but why not?

Our route starts from the Destitution Road, the same spot as for the western Fannichs. The initial climb up the lower Munro is steep and a bit wet but once on the ridge it is indeed a superb walk:

Track_SGURR MOR 18.2KM.gpx Open full screen  NB: Walkhighlands is not responsible for the accuracy of gpx files in users posts
The day was so-so, partially cloudy and a bit windy, but good enough for us! My arm was still aching a bit but it was already getting better and I was eager to climb to the high ground and visit a couple of Munros (even if they were repeats, who cares!).
We are lucky to live so close to this superb range of mountains. There is also a practical side to it now, when popular routes are so overcrowded, especially on weekend days: we can get there earlier than most walkers

There is a good path to Loch a Bhraoin, but on the other side of the bridge we entered the land of bog and water... I was surprised to see a new hydro dam, they pop up everywhere! The old bridge over the Allt Breabaig was still in place: Having crossed the bridge, we continued along a boggy ATV track. Nothing has changed since our previous visit to Meall a' Chrasgaidh, still the same splash-squelch sounds made by our boots... ...and still the same long, steep and rather boring push up the western side of the Munro: We took our time climbing, knowing that we had plenty of time having started so early. Kevin fiddled with his camera, trying to take good quality panoramas in the grey-ish morning light...

About half way up, when we reached the stonier section of the slope, weather suddenly changed for better and though the sunny spell didn't last long, we had the chance to see An Teallach in its full glory, before cloud obscured it again: Sgùrr Breac and A' Chailleach, the ridge to the west:

Not so steep a walk from now on. Can you spot the Panther?

The last sunny moments before the sky clouded up again: Panoramic view of our next target, Sgurr Mor. Weather was now changing quickly - we might not see anything from the next summit...

Zoom to the infamous slabs on Mullach Coire Mhic Fhearchair:

We didn't linger too long on the first summit and as soon as photos were done and dusted, we carried on to the wide bealach between Meall a' Chrasgaidh and Carn na Criche. Here, we noticed the last remaining patch of snow (seen here in the foreground to Loch a Mhadaidh): 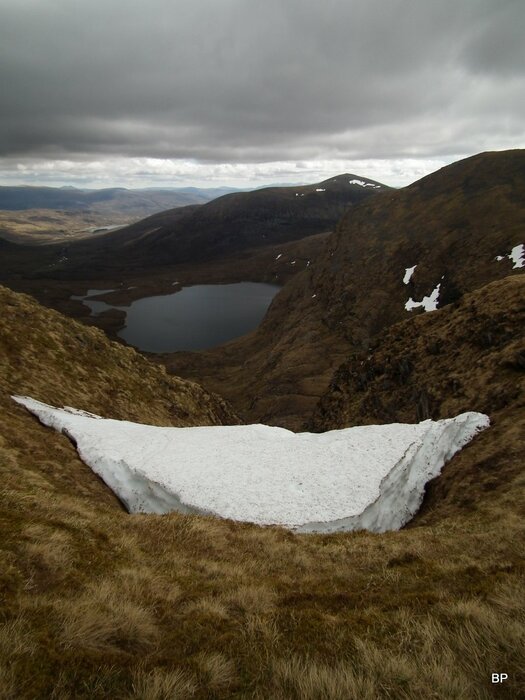 After about 150m of ascent on easy ground, we landed on the summit of Carn na Criche. This is a Munro top and a Simm but for us it only meant a connecting point between the two Munros. Good viewpoint though, worth a short break: The drop on the other side is only about 70m and soon we were staring the Monstahhh in the face. Having done it before from Beinn Liath Mhòr Fannaich side, I was no longer intimidated by the brutal shape of Sgurr Mor...

...and despite looking a bit frustrated in the photo below, I didn't find the 200m steep push too challenging. A few loose boulders to clamber over, but an obvious path can be followed all the way to the summit. The eastern cliffs of Sgurr Mor - always looking so majestic: The cloud was drifting around, just above the summit of our hill... ...but the views were still magnificent, especially across Coire Mor to Sgùrr nan Clach Geala:

Loch Fannich and the southern Munros of the group:

We sat by the cairn and dug up our sandwiches; despite the hills being very busy today (we passed many walkers on the way up) we were lucky to have the summit to ourselves for 20 minutes or so. It felt fantastic to be on a higher mountain once again!
The only way back if returning to the same starting point is to retrace steps back to Carn na Criche: By the time we descended to the first bealach, the clag was coming down on all tops. We had enough time to include Sgùrr nan Clach Geala, but since we were almost sure we'd get no views from it, we decided against it. This is a good Munro for a winter outing and we already have a sneaky idea for a route!
On the way back we skipped Meall a' Chrasgaidh by dropping straight into the glen following the stream Allt Daimh Beag. Because the river was low, we decided to cross it to get to much drier path on the other side.
The moody mountains behind us:

Overall, this is an interesting way of climbing Sgurr Mor, maybe not the hardest route but with fantastic views from higher on the ridge.

My next report will be about an incredible round of 2 Corbetts and a Graham in the wild world of Ardgour. Yes, the Galmadale Round is coming!

Re: The Monster Mor

I did a very similar route last year ( https://www.walkhighlands.co.uk/Forum/viewtopic.php?f=9&t=100691 ). Nice to see the hydro scheme is looking like less of an industrial hive of ground moving machinery in your photos!

Re: The Monster Mor

gld73 wrote:I did a very similar route last year ( https://www.walkhighlands.co.uk/Forum/viewtopic.php?f=9&t=100691 ). Nice to see the hydro scheme is looking like less of an industrial hive of ground moving machinery in your photos!

The hydro schemes are a sore on the landscape while being constructed. At least this one seems to blend in when finished, well, sort-of. I remember one small glen in Arkaig area which we visited before and after receiving the"hydro treatment"

The damage done to build the access road was horrible: