Consistent warm, dry days in succession had me swithering on whether to do Meall Glas & Sgiath Chuil or their northerly neighbours of Creag Mhor & Beinn Heasgarnich. The rationale being the notorious bogfests would have dried out on parts making it more bearable from a walking point of view. The former duo won the toss.

A couple of signs greet you at the small parking area: one highlighting the start of the walk, the other a kind request. 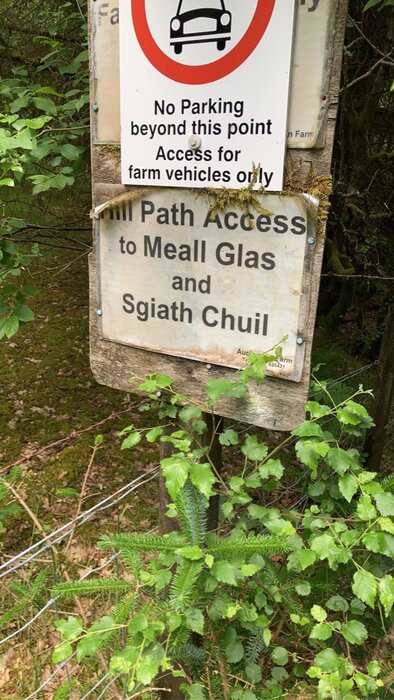 You can do these hills in either clockwise or counter; I opted for the counter-clockwise option, as I studied the route from the reviews prior to going out and this seemed the most popular. What I will say from a navigational perspective though, is that from the summit of Sgiath Chuil you can see the dam and a footbridge and from those landmarks there is a decent path that will lead you all the way back to the farm as most of this route is on pathless terrain.

I walked past the farm and carried straight on at the double sign marking the hill routes, carried on past a couple of fences before going through a gate (with very little slack on the chain) adjacent to a river crossing.
Closing the gate, I then ventured on uphill on a well trodden path. The fence that keeps to your left most of the way up to the dam has little badges with footprints winking at you periodically as a nod that you’re on the path, interspersed with an assortment of beautiful waterfalls below on your right side. Waterfalls, just some of many

The confluence of Allt Glas and Allt Riobain is not far from the dam and I crossed the footbridge at Glas then immediately crossed over Riobain straight after. The water was calm and there was no issue as you can see from the photo below. A feint path was visible here and there but in the summer conditions I had you don’t or wouldn’t need to rely on it. The gradient sharpened and with the sun wreaking havoc by burning a hole in my back and melting suncream in my eyes there was waterbreaks a plenty as I nighed in on the summit. Just before going on to the shoulder I spoke to someone doing the route in opposite direction. We exchanged what we had encountered on our journeys so far before heading off. I never seen anyone else on the hills after that point. Two hours after setting off from the car I was atop Sgiath Chuil. I headed northwards on a path while surveying the area for the best route to descend. I could see the path petering out ahead so had to make a go for it. I couldn’t make a direct line down so the climb down largely consisted of me oscillating left and right at where there was ease on the slopes. Looking ahead, I was already plotting a path through the peat bogs and the heather higher up. I was in direct gaze at the sun at this point when it was out from the clouds and the hill was steep on occasions. It wasn’t too bad though. The hill with its scattered heather and boggy parts reminded me of some of the hills I frequent at Clyde Muirsheil Park which I am local to. The bogs had mainly dried out by this stage so was surprised how clean my boots were when I got to the top of Beinn Cheathaich. It really was steep finding a way down after Sgiath Chuil It was a straightforward task to Meall Glas summit from here. Beinn Challuim looking spectacular on the way. Meall Glas ahead with Beinn Challuim getting in on the act 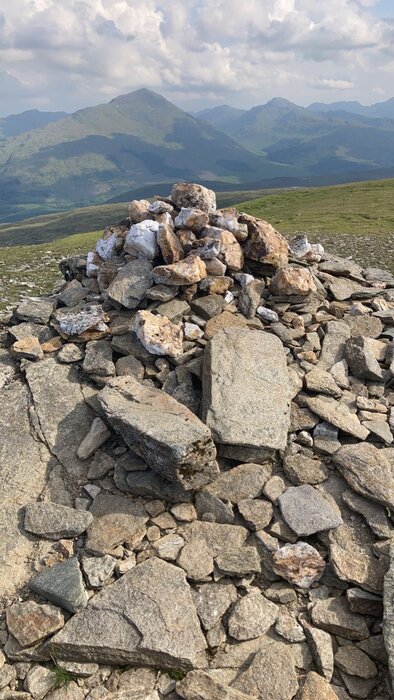 On the way down the vast bog expanses dominated the landscape; taking care, I made my way down the sleep slopes below. 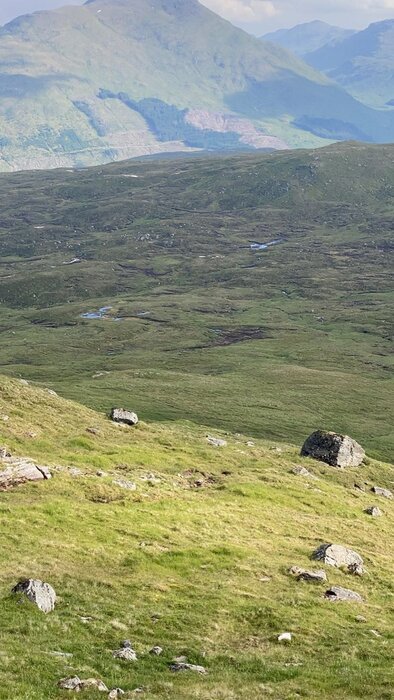 There is no real path at all and I made my way down, there was one or two for a slight part but you couldn’t depend on them. They were there to skirt round boggy areas if anything. Eventually I made my way to a stream I picked out in the distance in the belief, that, having read the WalkHighlands review it was the one advising to keep to the left of the burn. After a check at the map I realised I was following Allt Glas which would’ve been a time-consuming detour. Realising the error of my ways, I then headed south and merged back on to the intended route where it is largely pathless. It wasn’t too long until the deer fence came into view and it was only until further down on the outside right hand side a path was there and following this will bring you back out at the farmhouse you pass at the beginning of the walk.