Leaving a miserable and sodden Nairnshire

at around 5:30 on Saturday morning, I reassured myself that the Far North was going to be fine, (weather-wise) as per TV weather reports the previous evening. Inverness-Shire was no better and as I entered Easter Ross and drove over the Struie, there was no improvement. Stopping at the viewpoint to admire the scenic splendour of the Dornoch Firth and Bridge was also marred by low cloud and drizzle, and so the miserable weather continued.

Only when I reached the picturesque early-morning silence of Lairg, did the dreich begin to subside. With a perfect rainbow ushering me Northwards, I continued towards my goal and the actual walk - Sandwood Bay.

Arriving at Kinlochbervie, I realised I had forgotten my printed direction sheet, and so, after some fevered searching through my "Driver's Atlas" I eventually found the car park. One young couple were already parked there, but they were leaving rather than arriving, so mine was the only vehicle as I set off at around 9:45. By now, the weather could only be described as perfect. An almost cloudless sky seemed to open up even more as I continued along the excellent path and the views back towards the Kinlochbervie bay and islands assured me that the wet weather was truly way behind me.

The ancient bleak Sutherland moorland, dotted with small lochs along the way, was exhilarating and I found myself eagerly anticipating the rest of the walk and my arrival at the bay.

A keen Munroist until a major heart operation a couple of years back, I am only just beginning to get out and about again, so I was relishing this first substantial walk and couldn't believe my luck with the weather. The vast expanse of heather and peat moorland framed by mountains and craggy hills fueled my excitement and, although I could see another couple heading in behind me, the feeling of solitude remained with me across the moor. Remembering the "Walkhighlands" report, I was keeping my eyes open for the two wooden posts that virtually mark the entrance to the bay, and when I came across them was quite surprised that I'd gotten there relatively quickly. The first sight of the Northern cliffs and the brilliant white breakers on the beach at around 11:00am, was nothing short of awesome

. As I followed the path down towards the dunes, I met a young couple who told me they had been camping there the past two nights and were disappointed to have to leave such a stunning place. I wasn't even there yet, but agreed with the "stunning" part. Wishing them luck on their return journey, I headed on down towards the beach.

As I trudged over the massive dunes, I became aware of something - I was grinning!

From ear to ear, I was grinning!!

And no wonder, still relishing my luck with the weather I was heading towards possibly the most beautifully remote beach in Scotland. I was in my element here, and I knew it.

Sitting on a rock, eating my sandwich lunch and wetting my whistle with a much needed cup of tea, I couldn't help but contemplate the power of Mother Nature. The pounding of the waves on the beach vibrated through me where I sat and the continual rumbling soon felt as natural as my own breathing. Looking around me, I was both visually and spiritually moved.

After walking the length and breadth of Sandwood Bay at least twice, taking photographs and videos I decided to head back. I had spent two hours here without realising it, but I had done what I had set out to do and it was time to go. There really are no other words to describe the awesome beauty of this hidden highland gem. I don't know if it's the most beautiful beach in Britain, but It is the most beautiful sight you'll see after a trek across a bleak Sutherland moor no matter the weather.

The hardest part of the walk I would say, is the clamber back up and over the monumental dunes, but the effort involved really is negligible in the great scheme of things. Like the young couple before me, I found it hard to leave such a stunning place. Departing at 1:00pm and with the weather holding for my return journey I happily trekked back, arriving at a now half-full car park at around 2:20pm, satisfied with my achievement and still with a grin on my face!!

The walk to the bay is literally more than worth it, taking me a modest four and a half hours inclusive of the two hours spent there, and I would happily do it again, weather permitting of course! 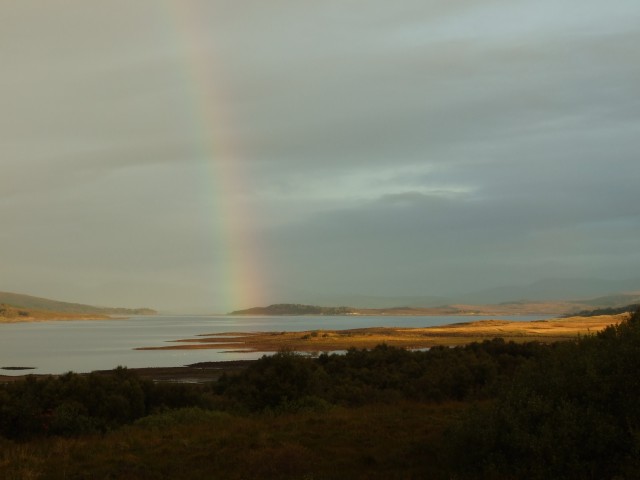 A rainbow beckons me Northward 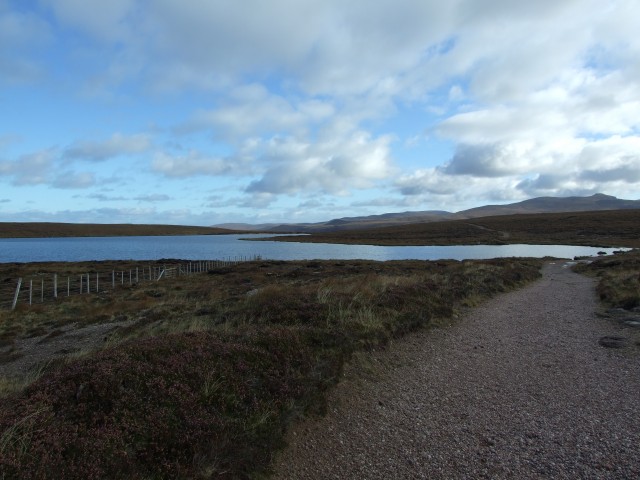 The Moorland Walk is dotted with small Lochs Stunning is the word for Sandwood Bay

Freewheelin wrote:love that last pic - that would put a grin on anyone's chops

Yep, thanks! I took hundreds while I was there. That one was just picked at random for the report, the place is just spectacular!!

That last pic looks like it could have been taken in Cornwall!

Always great when the weather turns out brilliant and the mountains come alive! Then you truly realise what a beautiful world we live in, and what a stunning country Scotland is.

I love the pic of Sandwood bay. It looks spectacular in the sunshine. Not a deckchair in site, Thank goodness!!
Glad you are now fit enough to get back out and about again.

Great photos, jakeyboy...I see rainbows all of the time but I've got such a rubbish camera I can never get a good photo of one, so jealous of yours grrr

walk aboot wrote:Great photos, jakeyboy...I see rainbows all of the time but I've got such a rubbish camera I can never get a good photo of one, so jealous of yours grrr

Many thanks for the comments walk aboot, glad you like the pictures. Sorry you've got a rubbish camera, but with the amount of walking/climbing you do, you really ought to have a decent one!

And hey, I'm glad you liked the 'report title' but um....just the title?

Anyhoo, thanks again for the reply, get yersel a decent SLR and maybe I'll see you in my travels one of these days!

Oh no no no, I loved the whole report, but especially liked the title (think we've all had those feeling jammy, can't stop smiling moments on hills/walks, so we all recognise it

colgregg wrote:I love the pic of Sandwood bay. It looks spectacular in the sunshine. Not a deckchair in site, Thank goodness!!
Glad you are now fit enough to get back out and about again.

Thanks for the comment colgregg. I hope to break myself in gradually and eventually tackle some more Munros