Being retired, we usually choose our hillwalking expeditions to coincide with good weather. So although there was no torrential rain, and many people will have had far more challenging days on Grahams, this hill probably qualifies for us as one of our wettest hill days in the last decade. It was a hill-walking club weekend so we had to go out in the rain somewhere, for at least a while. I decided that I might as well get a tick for my efforts and persuaded several others that they would like to do an 'easy Graham'. Well, if I say that again, I expect that they will all decline. One person decided that Slioch, done in good weather with a path the next day, was far easier. The chat was good though. We took the standard route from the high car park and headed over the confusing wet ground of knolls and lochans. There was little visibility at all, little wind lower down but more higher up, and mostly perpetual light rain, so it was waterproofs and compass bearings all the way. 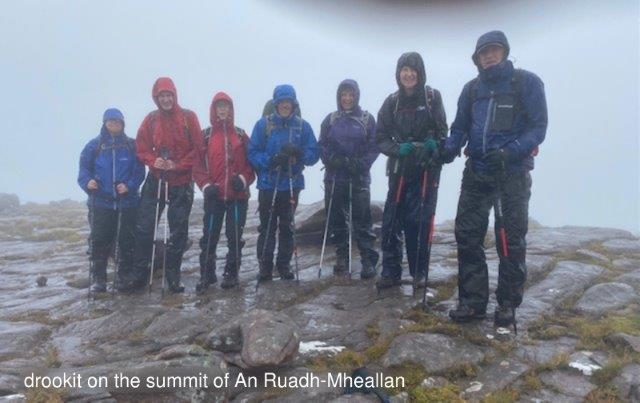 Luckily the rain stopped very briefly as we dropped off the summit to shelter from the wind for a quick lunch. There had been talk of extending the route as described in the SMC Graham book, or yomping round part of the coastal path afterwards, but somehow with a large group of varying speeds and quite a few pauses to check the bearing, the time disappeared and we simply retreated the same way back to the cars and a superb drying room at the Torridon Hostel.

Re: Possibly my wettest Graham

This is the kind of walk I enjoy vicariously only...