Should've been out yesterday - weatherwise, but with Harvey's folks in Denmark, decided to stick with tradition and go on thurs and hope the rain cleared before lunch - which it did.
Picked up GordonC at the Banchory caravan park where he was shaking down his van, and being a good Aberdonian, making use of the pandemic reduced VAT rates to keep the costs down.

Took the shorter approach as I'd noticed on GE that the track extended beyond the terminus marked on the map, to just below the top. 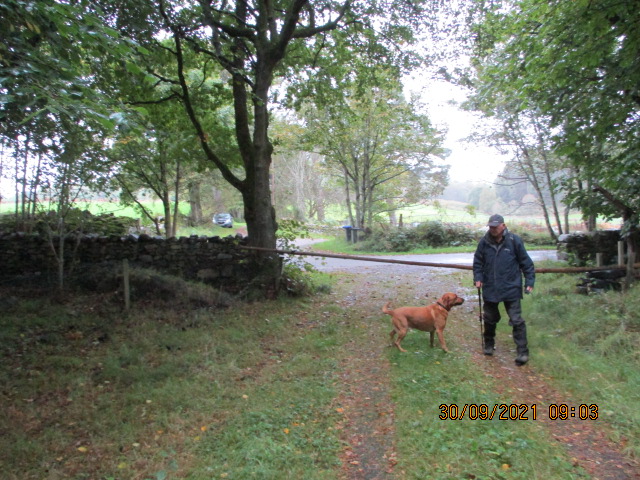 On the way up we noticed wee posies of logs stacked up around the track. Seems that a few folk around here have wood burning stoves - tut-tut, don't they know we have a climate emergency ! Also various bits of hardware were peppered around. 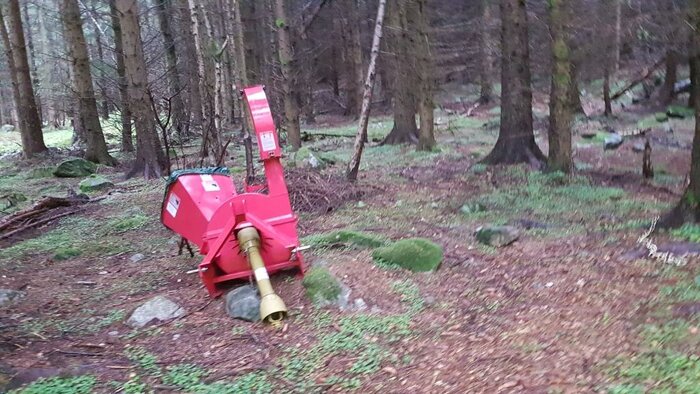 A wood-chipper on Maryfield

A quick squirt up through the trees from the track got us to the summit area which we patrolled to ascertain the spot height. 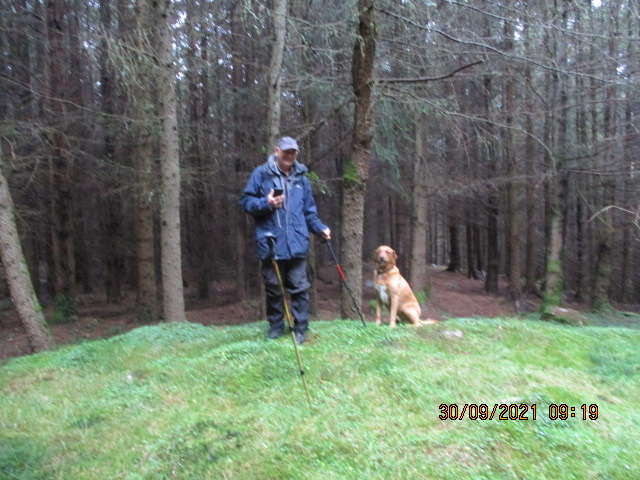 GordonB and Harvey at the top of Maryfield Returned more or less the same way, noting a wee sawmill at the side of the track, happed up against the weather..

Doon the road a wee bit to tuck in at the track end. 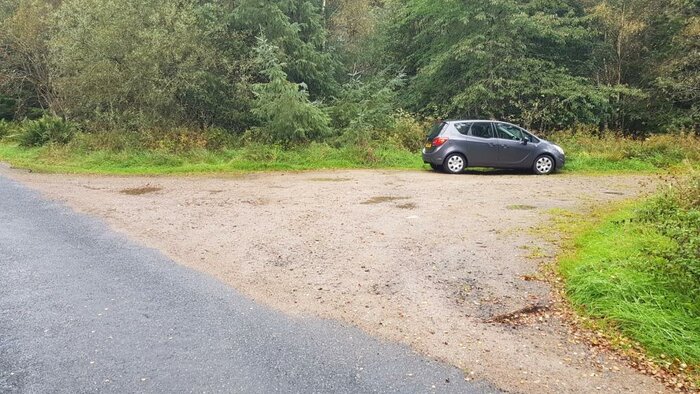 Rushed up to the trees as the rain had started again and sloshed our way to the back up the hill to ascend the track back to the top. This was a fruitless gesture as we couldn't find a track leading to the top, so we returned to the previous fork in the track and along to a windfall, then up a "firebreak" which was just open woodland, following deer tracks to the massive Pictish cairn at the top. 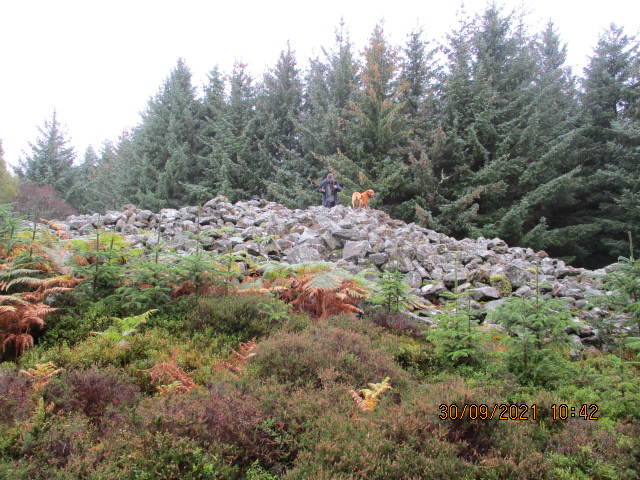 The Pictish cairn on Cairnlee

Slithered around on the greasy rocks then descended back down through the trees to the track. 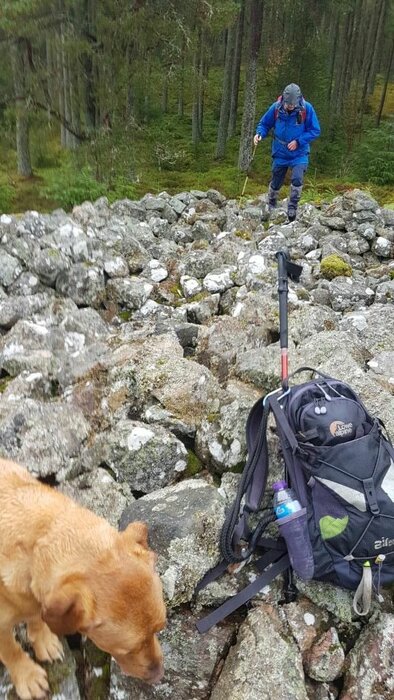 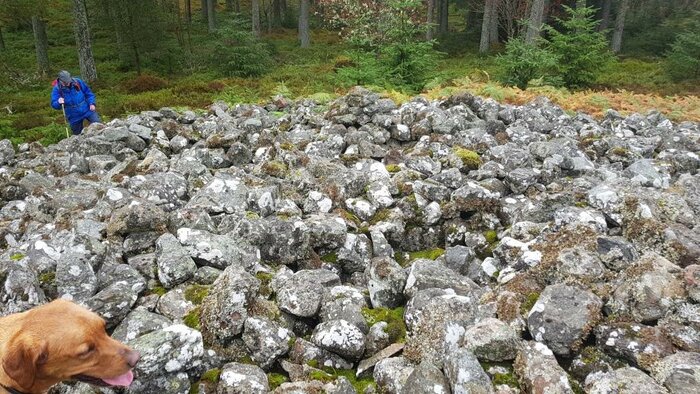 The muckle Pictish cairn on Cairnshee

Back at the car, I noticed the track going up Rhindbuckie from a few hundred meters back up the road, so we changed my original plan to ascend from West Mulloch to save a smidgeon on distance. 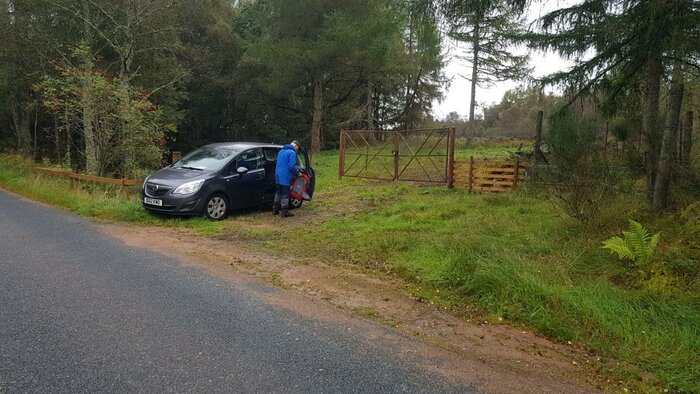 Parked by double gates and ascended the track via the westerly gate, negotiating a few windfalls at the lower end. 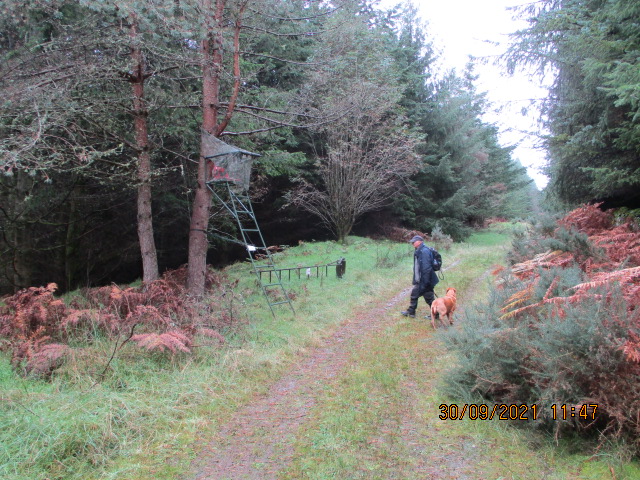 Passed a shooting hide in a tree, then intersected the "horizontal" track beside a mini-quarry. We plunged into the forest at the back of the quarry to find the fence running up to the top. After a wee bit we found that the fence was in fact an old dyke which we followed easily to the top, crossing over at one point to avoid overgrowing trees. We continue to marvel at the sheer tenacity of these ancient dykebuilders. Bet they didn't realise that someone would obscure it with a forestry plantation one day.
At the top, we branched off to look for the trig, which was pretty dirty and trying to masquerade as a tree stump in the bracken. 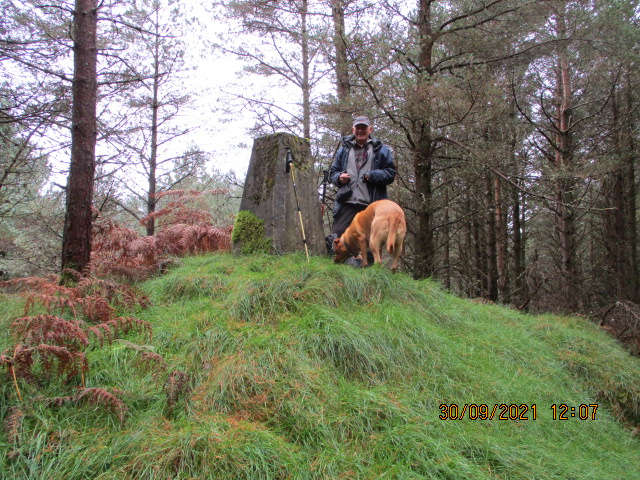 The mucky trig on Rhindbuckie

We paused for a few moments then continued following the dyke as our main nav aid to the bealach, where we found a well appointed shooters huttie with a garage/storage shed adjacent. 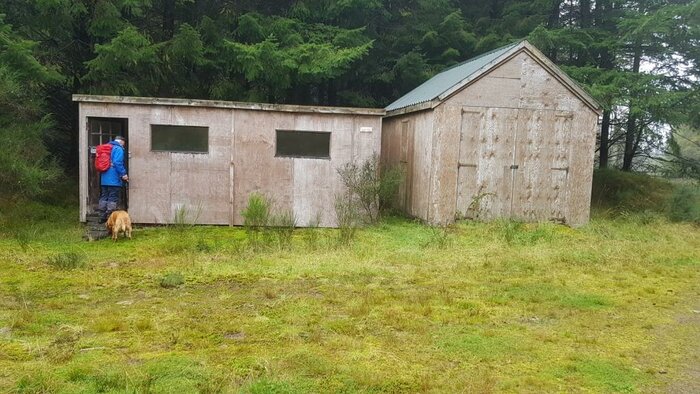 After a quick inspection, we plunged back into the forest to find our guiding dyke to lead us up Affrusk. For a change, it was fairly easy going beside the dyke and soon we were at the crook in the dyke marking the top. The crook o the dyke at the top of Affrusk 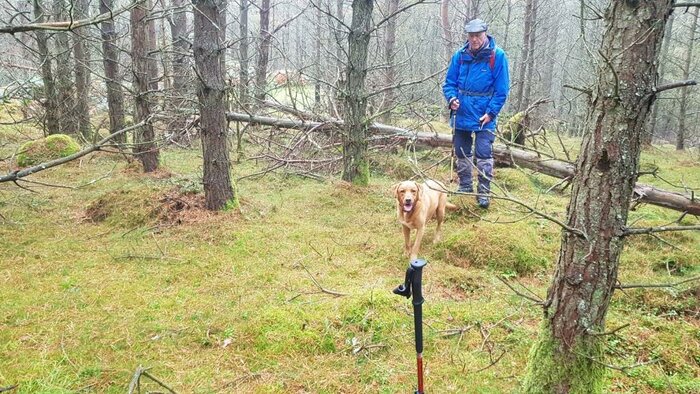 GordonC at the top of Affrusk

We phaffed around to find the highest point then returned to the bealach. It was decided to follow the track back round the north side of the hill which entailed dropping a wee bit of height - which we abhor ( is it an age thing ? ). However it was an easy meander back to the mini-quarry and thence down to the car

Drove round the wiggly road to parkup by the gate.

Inspected the stone circle not far up the track then negotiated the windfall over the track taking us to the S side of the top. 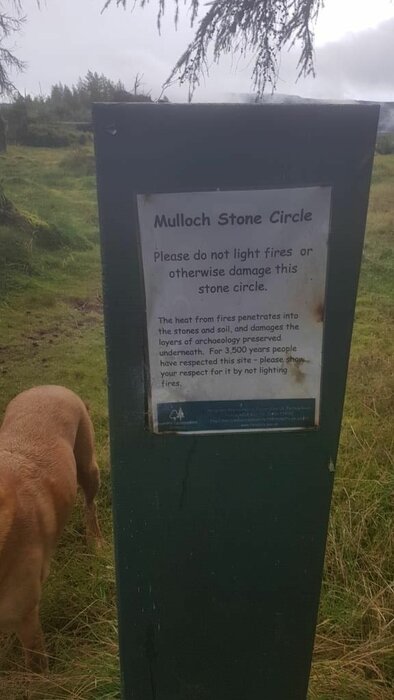 Standing stone "instructions" on the way up Mullach 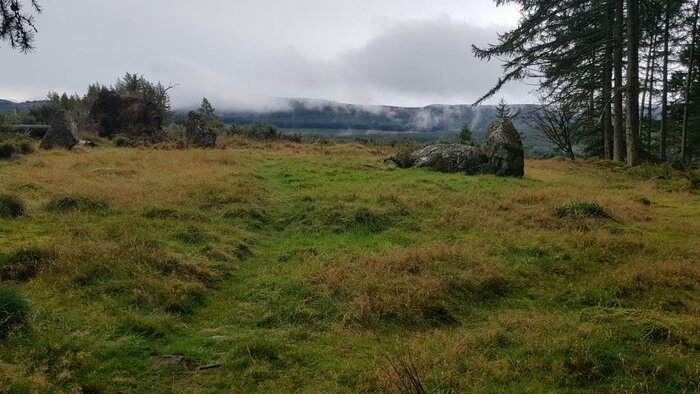 The standing stones on Mullach

Found a grassy forwarder track to take us up to the top area, then wandered along a bit to ascertain the highest point at the NE end of the broad ridge. 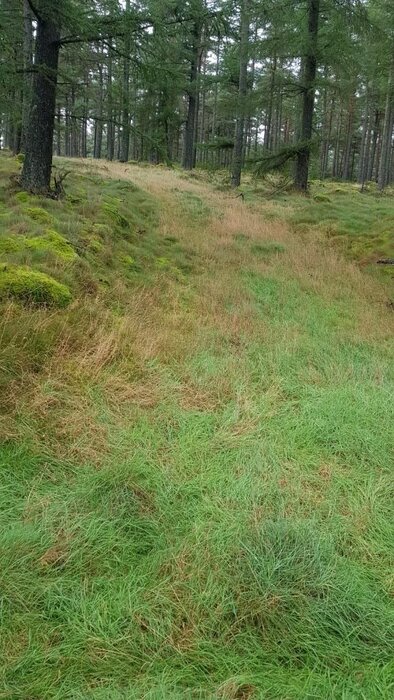 The grassy forwarder track up Mullach 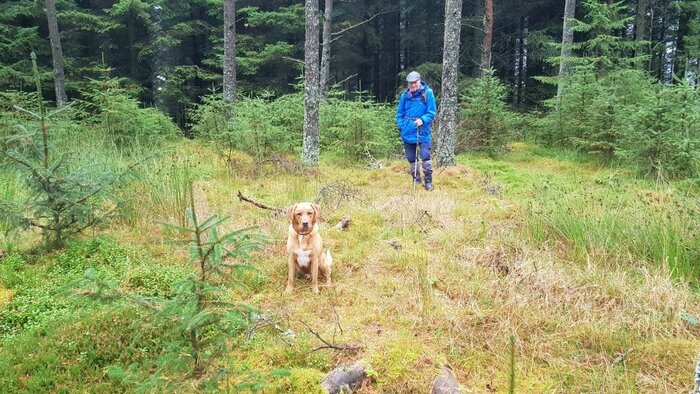 Satisfied we returned to the track and met a couple of dog -walkers flexibly ducking under the windfall that we had skirted round on a path in the trees.. 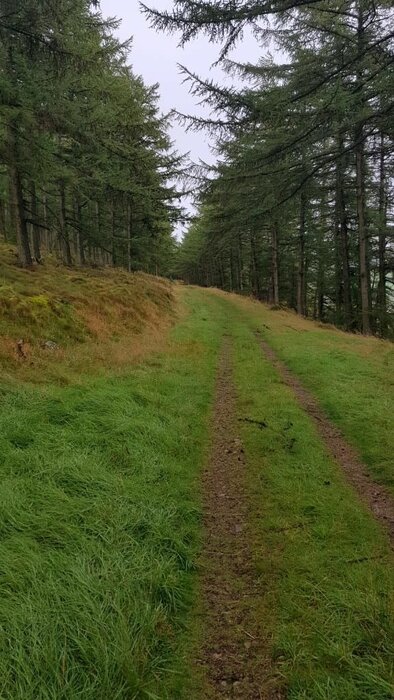 The track round the S side of Mullach

Repaired to Morrisons in Banchory for a cuppa. Disappointingly their stock of GF stuff was pretty poor, much to GordonC's chagrin. However, the coffee was good !
A bit different from our previous sweltering summer days. We had to cope with being wet for a change and re-learn how to wear our boots'n spats. Still - enjoyable!