I always fancied climbing Càrn a' Ghille Charr from the north via a minor top called Tom a Chait, which has a TV mast and a decent track leading up, but since I found out that the hills of Cromdale have their own dark secret, it had to be the approach from the east (Mains of Inverourie). We had used this spot as a start/finish when we did the Cromdale Grahams for the first time in 2012. There's a good car park near Ballcorach: Track_CROMDALE WHITLEY 12KM.gpx Open full screen  NB: Walkhighlands is not responsible for the accuracy of gpx files in users posts
The descent route was pathless and a bit bumpy (a lot of scratchy heather!) but nothing too off-putting for an experienced pair of off-piste wanderers

I remembered that the previous time we took a shortcut through the Mains of Inverourie, but as soon as we walked up to the farm, we discovered that a large duck pond was dug up in the spot of the old path, so rather than making our lives difficult, we turned back and took the track to Knock farm: This is an official right of way (marked "path to Cromdale") and soon we reached the buildings of Knock Steading, where we stopped for a few minutes to photograph the old, ruined watermill: We noticed that the ruin is now fenced off and signs "construction site" placed all over, so hopefully this 19th century ruin will be restored. It would be a shame if it was completely lost The remains of the water wheel and the water supplying canal

A small pond just above the mill: We followed the ATV track uphill, Kevin complaining about the unusually high temperature (+12*C in November??? View back down to the Mains of Inverourie with the new pond visible to the right of the main buildings: Looking down the ATV track with Ben Rinnes on the horizon: It didn't take us long to reach the top of the track at about 500m. From here, it was pathless but relatively easy ground leading over Carn Eachie to the summit of the Graham. Just out of habit, I kept checking all peat hags we walked past, hoping maybe to find a lost part of the crashed plane, but I knew the crash site was somewhere near the top of Allt na Ha so of course, I didn't spot anything on the way up. Kevin, in the meantime, was drawn to the cloud "cuddling" the tops of Ben Avon:

Occasionally when I go hillwalking, an odd song gets "stuck" in my head and plays over and over again, like a broken vinyl. This time it was Lady Gaga singing:
"I'm on the edge of glory..."
Very appropriate as we were actually walking along the Moray county border!

The summit in sight!!! The crash site is in the dip between the summit and the lower top to the right: The summit was surprisingly cold and a bit windy. At least Kevin stopped moaning about getting overheated. Instead, he found himself a comfortable seat to eat his lunch:

I wandered around with my pocket camera, recording the autumnal views. Soon winter will set in and the hills will turn white... And then, any plane crash investigations will be postponed until spring, for practical reasons.

The summit views are rather flat, maybe except from the Rinnes pano:

Typical countryside at the edge of Moray: From the trig point, we traversed to the cairn about 200m to the east, for more views:

Kevin and the cairn:

Now it was time to find the crash site. The plane was Armstrong Whitworth Whitley, number LA837/F from the 19th OTU (training unit) RAF in Kinloss. On the last day of January 1943 at 10.35hrs, the aircraft took off from Kinloss airfield to undertake a typical cross country training flight. Weather was fine at first but deteriorated later in the afternoon; as a result the plane struck the high ground just below the summit of Carn a’Ghillie Chearr while returning to base at around 5pm. I assume they simply didn't see the mountain in the low cloud or misjudged their position. Three members of the crew died at the scene of the crash, one died two days later and one other luckily survived. Time to search the peat hags!

We had detailed description and grid reference for the crashsite. We also knew that the majority of the wreckage had been collected shortly after the accident, so we didn't expect to find much, but... ...having checked several peat hags, we came across the first "set" of debris. Kevin expressed his doubts about this pile being remains of a Whitley bomber. In his opinion it looked more like "a few bits from a modern Toyota excavator". I'm not an expert on excavators and diggers so I don't know... Anyway, we documented the debris properly. Just a few metres down from the suspicious pile of orange debris, we came across a second pile, this one definitely from the Whitley: I compared our findings with photos taken by another crash site blogger in 2011 (links as always, at the bottom of this page). Sadly, at least one large piece of wreckage, a metal part of the airframe, has since gone missing. Maybe it was moved by weather/melting snow, but more likely, someone just took it as a souvenir (despite the Protection of Military Remains Act 1986 forbidding it!). What remains on the slopes of Càrn a' Ghille Charr today, is just a few mangled pieces of the aluminum from the fuselage... 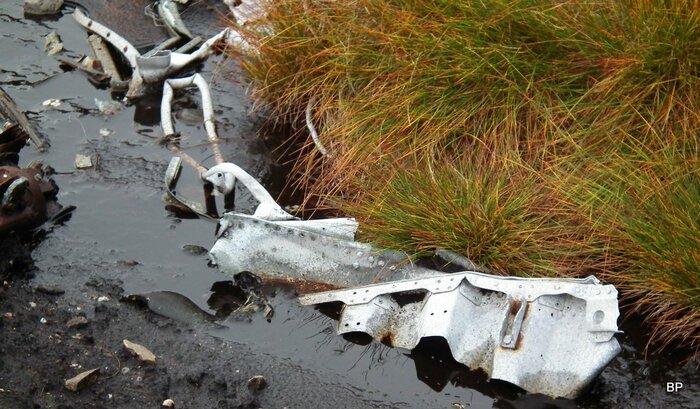 ... one large piece of the main undercarriage assembly...

...and the two engine bearers, metal structures supporting the engines: The engines themselves are sadly long gone. They would have been two Rolls-Royce Merlin X liquid-cooled, four-stroke V12 engines. The Merlin IV variation developed specifically for Armstrong Whitworth Whitley IV, had pressure-water cooling. We had been to five Whitley crash sites so far, but we haven't seen a single complete engine yet

Additionally, we found a large number of small debris: In the next peat hag below the main debris field, I spied several parts of smashed battery, including the bakelite from battery casing: We checked all nearby peat hags, but found only one additional bit, a small part of the frame:

If there is more, it is most likely buried underground...
One of the boys who died in this crash is buried in our local cemetery in Kinloss. We wondered if we could find his grave and pay our tributes. Sadly, so many of those old war graves are completely forgotten...
Having located all of the wreckage, we decided to descend east along Allt na Ha rather than returning the way we came: The descent route was OK though a bit overgrown with scratchy heather: 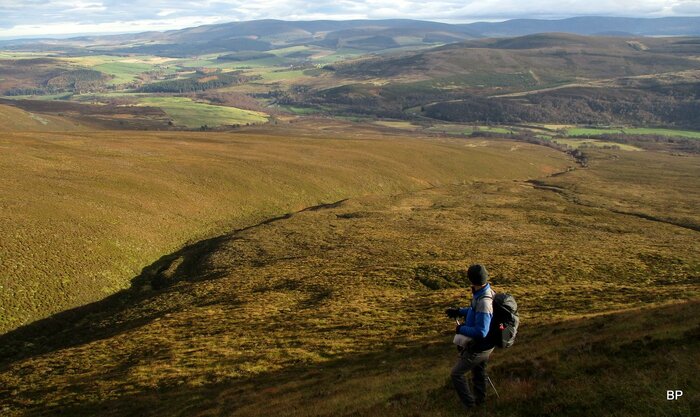 We aimed for the upper end of an estate track leading to a set of grouse butts. This track then took us down past a TV mast to the farm of Alltnaha, where it joined a better track following River Avon. Back in the car park at 2pm, we still had a couple of hours of daylight left so decided to visit the nearby ruin, Blairfindy Castle. This old tower house had nearly been lost - in was inches from falling down but luckily, in recent years it was consolidated and is now open to the public. What a fantastic job was done here. The ruin was stabilized and the missing pieces of masonry "patched up". One can enter and lurk inside this lovely old tower. Inside the castle, bird boxes and bat roost were placed in the upper sections of the walls, to provide habitat for wildlife.

The castle is free to enter and a visit highly recommended!

I have one more recent TR to write, about an overlooked Sub with fantastic views. To be posted soon.