A few days under the weather last week left me reluctant to do any serious hillwaking during wekend, but I needed some fresh air so we had a look at our list of Sub'2000ers, searching for something easy but with good views. Forecast was windy but with sunny spells and patchy cloud, plus the first snow has arrived on the higher tops... That was good enough an excuse to drive south to Spean Bridge, where we spied a red balloon - Meall Luidh Mor.

We had noticed this Sub before when we cycled past it to Corrour (to climb Leum Uilleim) and made a note to save it for a shorter winter day. We knew that the access to the summit was barred by commercial forest and we'd have to fight our way through boggy firebreaks, but in the end, I must say, the views were worth the effort.

We parked at the usual starting point for Beinn a'Chlachair group, followed the track past Luiblea, turning south after a couple of miles. The summit can be reached by using one of two firebreaks, we managed to do some kind of circular:

Track_MEALL LUIDH MOR 12.3KM.gpx Open full screen  NB: Walkhighlands is not responsible for the accuracy of gpx files in users posts
Early morning reflections in Abhainn Ghuilbinn with Binnein Shuas in the background:

The first snow on the Grey Corries:

Still feeling a bit weak but at least it wasn't Covid! Easy walking on a good track: Zoom to the Grey Corries and Stob Ban:

"Our" hill from the approach track - the true summit not visible as it is located at the southern end of the ridge:

The track we turned to leads to a small quarry, in the forest SE from Meall Luidh Mor. There was one gate to negotiate, but it wasn't locked. Through the gaps in the trees we had good vistas east to Binnein Shuas and Lochan an Tuirc:

Soon we reached the first of the two firebreaks which, according to our report research, gave access to the summit ridge. It looked walkable but Kevin suggested we should leave it for the descent route and find the second firebreak for the way up. Firebreak no. 1 (photo taken on the way back)

We continued on the track for another half a km or so, before reaching the second gap in the trees: At least the ditch wasn't full of water, but I was glad I didn't forget my gaiters! The firebreak walking was not a nice experience. A lot of squelchy bog and tuft-jumping, but we were determined to find the passage (not the north-west one this time, but the arctic conditions are coming soon!). We reached the end of the wide "tunnel" in the forest and Kevin spotted a much narrower corridor in the trees, leading right up to the steeper slopes of Meall Luidh Mor: He Who Knows It All Best found the passage!

Surprisingly, the ground in the narrow passage wasn't as waterlogged, at least I didn't have to fight for balance... 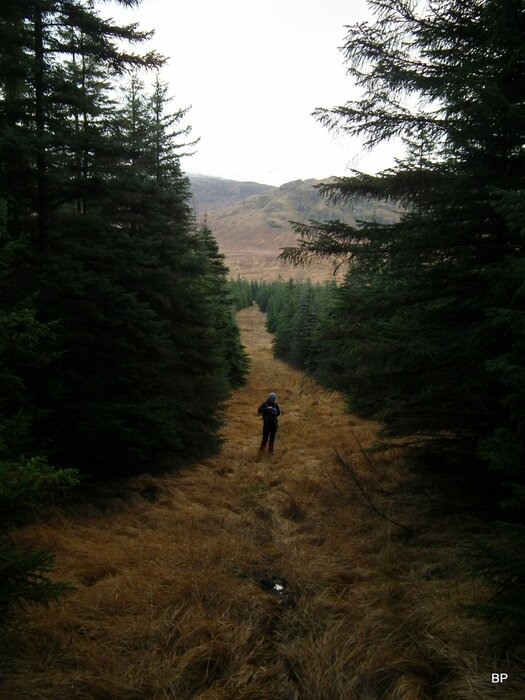 Once past the forest, we had less than 100m to climb but the ground was quite steep. Nice views though, and there was more yet to come! Up on the main ridge, the quarry I mentioned earlier visible to the left hand side, just next to the firebreak we used: Not sure what I was thinking here... Trying to roll a three-tonner down the slope

We emerged on the ridge very close to the summit, which is marked with a trig point and a small cairn. Views are stupendous as for such a modest hill:

Looking south-west past the trig point; shame about the high cloud obscuring some of the higher peaks: Lucy on her 25th Sub, with Beinn a'Chaorainn and Creag Meagaidh behind:

Sub no. 57. We are not inspiring to complete this list, but hopefully, will make it to 100 one day Our next target to repeat in winter conditions is this easy Graham - Creag Dhubh. We did it when the Beast from the East was blasting across Scotland, all I can remember was holding on to the trig point for my dear life. Worth another visit in deep snow!

Beinn a'Chlachair and Creag Pitridh are also on our winter walking list:

We spent some time on the top taking photos, but the cold wind reminded us that the days of summer picnics are well and truly over... It was time to drop back into the forest... 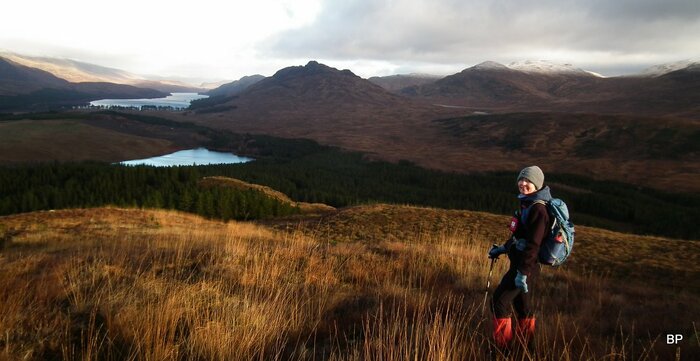 Beinn a'Chaorainn from the descent route:

Loch Laggan and Loch an Tuirc: We traversed the ridge and descended the northern side, hoping to come across the upper end of the firebreak we had walked past earlier, but to start with, we couldn't see it... Where could it be?

We dived into the trees but after only a few minutes, we came across a wide gap. We guessed this had to be the firebreak we were looking for: 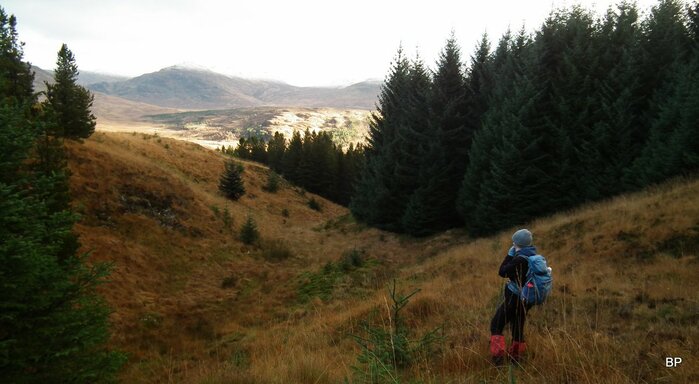 The next stage was wet and squelchy and we came to a conclusion, that such is the nature of firebreaks: they look inviting (oh, a nice gap in the trees!) but on closer inspection you need good boots, gaiters and... a little patience. On the track again, it was a nice, relaxing stroll back to the car. Not a big walk, but really satisfying - and views are second to none

In the last days of November we took advantage of the cold spell and visited one of our local Corbetts in full winter conditions. TR to come soon: there will be snow, wind, deer and ptarmigan!